Libyan rebels can not take the last stronghold of Gaddafi 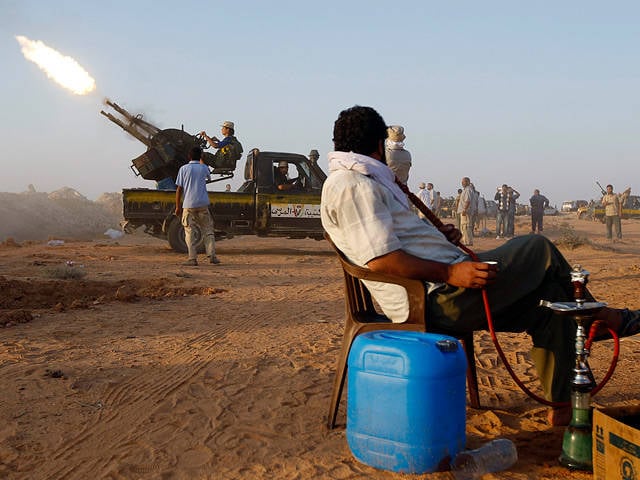 The troops of the Transitional National Council (PNS) of Libya seized the airport and the military base in Sirte, the hometown of Muammar Gaddafi, BBC reported with reference to a representative of the PNS forces.


This information, however, needs additional confirmation, since the rebel airfield was reported by Al-Jazeera television channel on Friday. Later it turned out that, having met with fierce resistance from forces loyal to Gaddafi, and having suffered tangible losses, the rebels were forced to completely stop the assault on Sirth and retreat, waiting for reinforcements. Are they not counting on the special forces of the NATO countries, who actually determined the outcome of the battle for the Libyan capital Tripoli earlier?

On Friday, PNS forces entered Sirt from the west, RIA reported.News", However, met fierce resistance. Gaddafi’s snipers fired from rooftops, his troops widely used rocket launchers to attack the enemy. According to one of the representatives of the PNS troops, some residents of Sirt joined the troops of Gaddafi.

On Saturday, Gaddafi’s opponents, advancing on Sirte from the east, took the city of Herava, located in 60 km from it, but their further advance was stopped by powerful enemy fire. At the same time, a representative of Gaddafi on Saturday reported that more than 2 thousands of Libyans were killed during NATO air strikes on Sirt. He also said that supporters of Gaddafi intend to continue the fight against the post-dancers.

Now, as reported, part of the PNS troops, advancing from the west and south, is already seven kilometers from the center of Sirte. Over Saturday, Gaddafi’s opponents lost about 30 people killed, many soldiers were injured. There are also reports of fierce battles for the city of Beni Walid, located to the south-east of Tripoli.

Sirte, located southeast of the capital Tripoli, the city of Beni Walid and the southern city of Sabha are the last major bastions of Gadhafi’s supporters. The forces of Gaddafi holding Beni-Walid, for the last week repulsed the assault from the PNS twice.

Meanwhile, some Libyan rebels have already refused to go to the front, because the losses in the battles of the city of Bani Walid make them afraid of the worst. About this, as reported by Rosbalt, writes a French journalist Alan Jules. In his article "The Libyan tragedy of Bernard-Henri Levy," Jules says that "the traitors did not follow the instructions of NATO," because "everyone is afraid now."

“After their bombardments, the army of darkness demanded that its subordinates take up the case. But no commander could not force the soldiers to go to the front line. What is called as a reason - fatigue? No, "you need to stop shedding Libyan blood," - notes the author of the article. At the same time, he added that this minority is unlikely to be heard: “there are more Islamists in the PNS than moderate ones. Just the day before, we recall, the army of Muammar Gaddafi inflicted a heavy defeat on the city of Bani-Walid on Libyan rebels. As for the city of Sirte, here, the French journalist writes, "despite the deadly NATO bombings that kill women, children and the elderly with the deafening silence of the world community, again the so-called tactical retreat."

Meanwhile, Europe will learn a lot about the Libyan campaign of NATO, finding "two Libya", writes "Kommersant". At the end of last week, the European Parliament adopted a resolution on the situation in Libya, which was supposed to fix the position of European deputies following a six-month operation of the international coalition in Libya and outline the strategy of EU interaction with the new authorities of the country. In the course of its discussion, members of the European Parliament sharply diverged in their assessments of the results of the military campaign, and details surfaced about secret oil deals of Western government officials with Libyan rebels. True, in the final resolution none of the criticisms were included.

During the discussion that preceded the vote, the newspaper reports, it turned out that among European lawmakers there is not just no consensus on the issues under discussion: from their speeches it appeared that they generally speak about different countries, different campaigns and different rebels.

Part of the deputies - mainly from the center-right parties - extolled the actions of NATO, the EU and "Libyan freedom fighters". Meanwhile, another part of the deputies - both from left and right parties - painted a completely different picture. “The NATO operation has been transformed from actions to protect the population into a campaign for regime change. The alliance, led by France and Britain, went beyond the UN mandate. All that the NATO countries have achieved by their bombardment are contracts for doing business with the new authorities of Libya, ”said Miguel Portaş (Portugal), a member of the United European Left Party faction.“ And you don’t have to say that only Gaddafi killed civilians. During the bombing of NATO, people also died. Yes, and the rebels themselves committed horrendous crimes that must be investigated. ”

His fellow party member from Greece Charalampos Angurakis warmly supported him: “The war against Libya turned into a massacre. The United States, NATO and the EU are fully responsible for the deaths of civilians in Tripoli and other cities. The goal of this war is to control the country's energy resources. The governments of NATO and the EU have embarked on this imperialist aggression in order to guarantee their monopolies the largest piece of Libyan oil pie. ”

During the speeches of parliamentarians surfaced some interesting details. Thus, the independent British MP Andrew Brons told about a secret deal worth $ 1 billion between London oil trader Vitol and representatives of the Libyan Transitional National Council, brokered by the British Minister for International Development Alan Duncan, a former consultant to Vitol. “Now this company can get monopoly rights to trade in Libyan oil. You do not need to be a supporter of the mean tyrant Gaddafi to doubt the motives of the West, who supported the Libyan rebels, ”the deputy was indignant.

Deputies skeptics see the future of Libya in dark tones, the newspaper notes. They fear radical Islamists will come to power, flooding the country weapon get to the terrorists, and Libya for many years, mired in a civil war. However, during the voting they were in the minority, and none of their comments were included in the final text of the resolution.

The Libyans themselves are also worried that the country after the incident will not escape from the clutches of extremists, reports Rosbalt. Although the head of the PNS, Mustafa Abdel Jalil, stated that the principles of Islamic law would be the basis of the new Libyan legislation, it is clear that in the conditions of the ongoing civil war, not intellectual politicians represent the real force in the country, Rosbalt reports. Now and in the foreseeable future, field commanders will create a “policy” in Libya, the newspaper notes. They have weapons and power, which they are unlikely to part with. It is the lower-level and middle-level military that actually lead the armed movement, which stands for the complete overthrow of the Muammar Gaddafi regime. And these people represent the power associated with political Islam. It is unlikely that they are in solidarity with those who are already almost officially representing the new government of Libya.

It is noteworthy that the Battle of Libya: Murder, Disappearances, Torture report published on Tuesday by the international human rights organization Amnesty International contains information about the brutal actions of the rebel formations that “absolutely lynched, shot, hung and killed by other means dozens of captured soldiers and suspects in mercenary "supporters of Gaddafi. And now these people with enthusiasm (as the new Libyan authorities believe) should get involved in the process of building a “moderate Islamic democracy”?