20 September 2011
11
LJ user drugoi writes: 44th Red Banner brigade of anti-submarine ships of the Pacific fleet Russia is located in the very center of Vladivostok, next to the seaport, opposite the building of the headquarters of the fleet. Four large anti-submarine ships of Project 1155 are standing in a row near the wall. From here, these ships go on combat duty to the Gulf of Aden, where they protect merchant ships from pirates.

To the right of the BOD Four is the Irtysh floating hospital, and to the left is the flagship of the Pacific Fleet, the Varyag guards missile cruiser.

The 1164.1 “Chervona Ukraine” missile cruiser was laid out at the 61 plant of the communard in Nikolaev 31 July 1979 (factory number 2010), 5 November 1982 was enlisted in the lists of the ships of the Navy of the USSR, launched 28 August 1983, entered the 25 is December 1989, and February 28 1990 is incorporated into the Pacific Fleet. After the collapse of the USSR, the cruiser went to Russia and in 1996 on the initiative of the crew of the ship was named Varyag, in honor of the famous 1 armored cruiser of the Pacific Navy Squadron of Russia, a participant in the battle of Chemulpo 1904.
Home weapon cruisers - self-guided cruise missiles of the P-1000 Vulkan complex. The CM-248 missile launchers are located on the sides of the ship, they look very impressive, and according to them, the Varyag can be easily distinguished among other ships. The cruisers of the 1164 project are also called "aircraft carrier killers" - in fact, they were created for that. 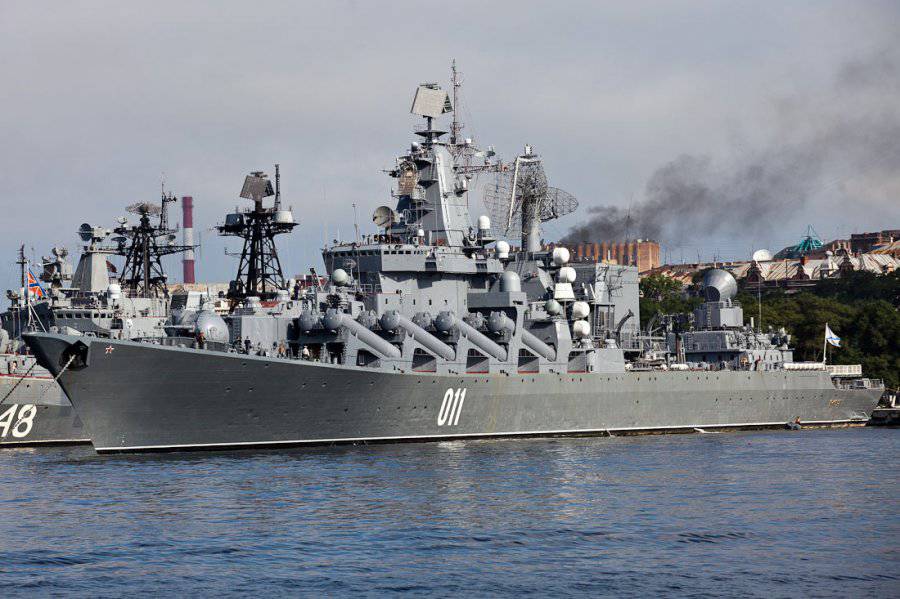 1. The scheme of the action of the missiles impresses: after a volley from one side, all eight missiles after opening the wings form a single group, a “wolf pack” with a leader — a separate flying missile that guides the whole group at the target, corrects the course for the rest of the missiles, discarding information to them. When approaching the target, the lead rocket chooses the largest object (aircraft carrier), sends one of the so-called rockets to it. “Special ammunition” and divides the remaining objects between the rest of the “swarm” missiles. All rockets include homing heads and strike objects. The mass of one rocket is almost five tons, the flight speed is about 2900 km / h. There are no chances to stay afloat after such a rocket hit the enemy ship. If the lead missile has time to shoot down, in its place there is another, exactly the same. The attack occurs without the participation of the crew of the ship on the system "shot - forget." Interestingly, all this is the technology of the beginning of 70's. 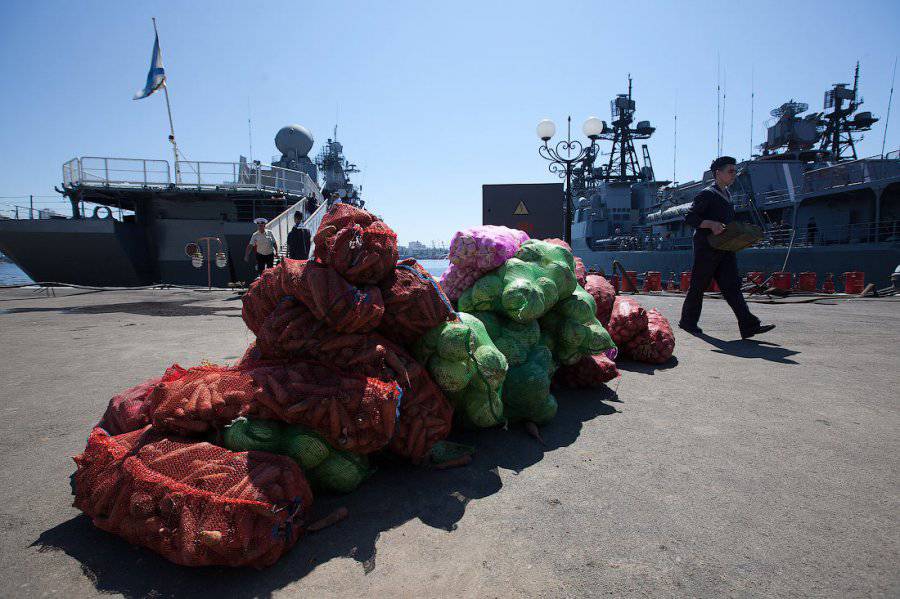 2. Acquaintance with "Varyag" begins with prosaic bags of cabbage and carrots. Standing next to the BOD, Admiral Panteleev is going on a hike to the shores of Africa and loads to himself a supply of food. 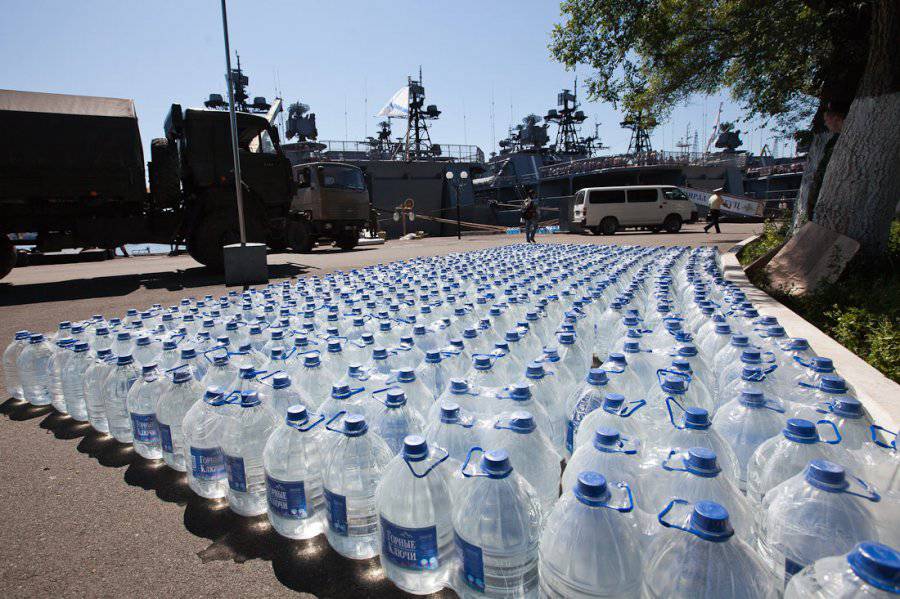 3. In the sea trips take a long time and stock up on everything you need seriously. This is only a small part of the drinking water that is loaded into the holds of a warship. 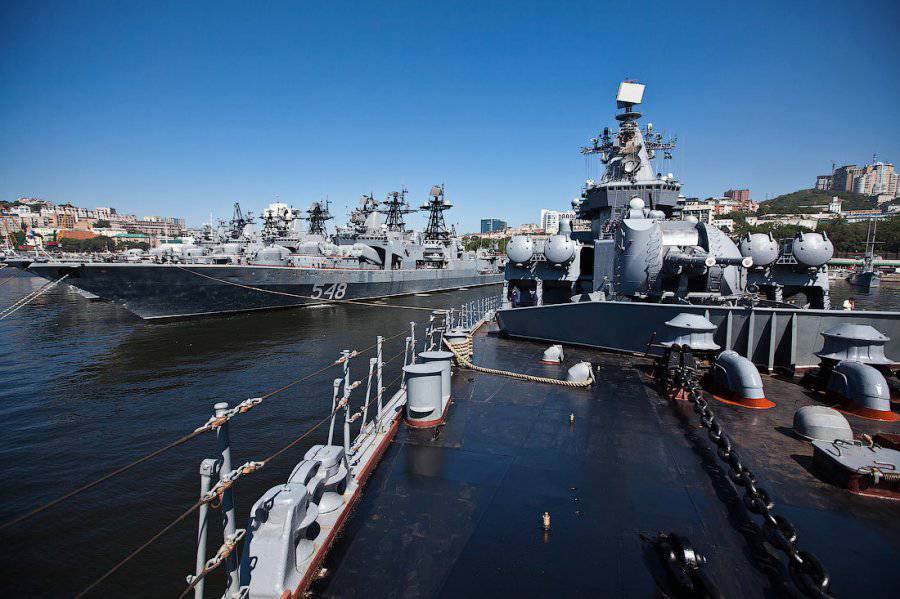 4. The officer accompanying me advised me not to use my mobile phone: “If it’s better to turn off the smartphone, it can burn out.” I did not believe it, but just in case turned it off. The ship has a full set of radar armament of the MP-152 “Ring” complex for detecting working radio and radar stations, homing heads of enemy missiles, their direction finding and suppression. Perhaps, in the words of the officer and there was a certain reason. 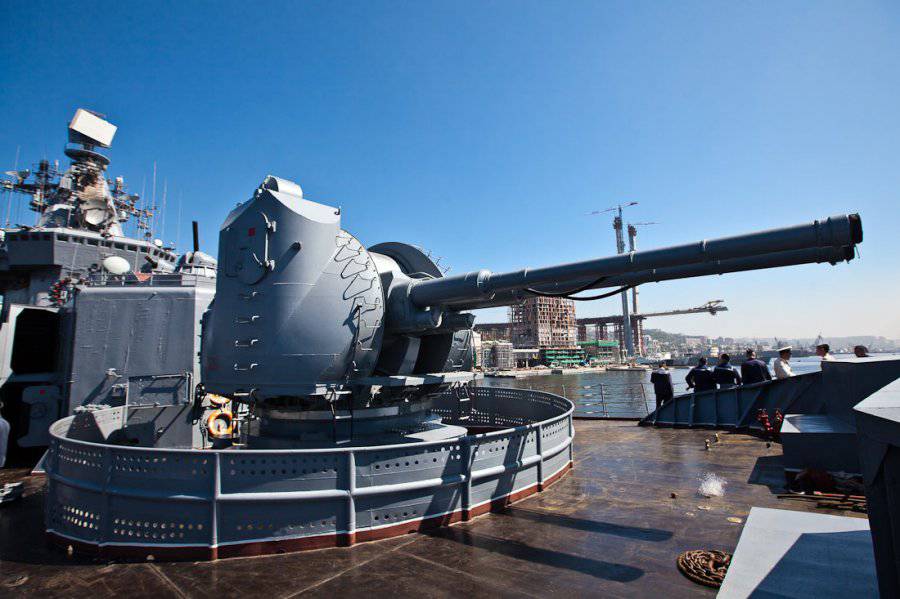 5. On the tank "Varyag" is the AK-130 - naval automatic gun. It fires a high-explosive fragmentation projectile at a speed of 90 rounds per minute and a range of kilometers to 23. Fully automatic - acts independently until ammunition runs out. They say it has no analogues in the world. Something, and what shoots we were able to do. There were problems with consumer goods, but the guns were always excellent. AK-130 is no exception. In the initial ship design of the launchers, there were 12 (six per board) and instead of one twin gun there were two single-barreled A-100. In 1972, Admiral Gorshkov ordered the addition of four more launchers to carry out two full eight-rocket volleys, and two AK-100s to be replaced with one double-barreled AK-130. The ship became much heavier, the speed and ammunition of artillery guns decreased (720 shots against 2000). 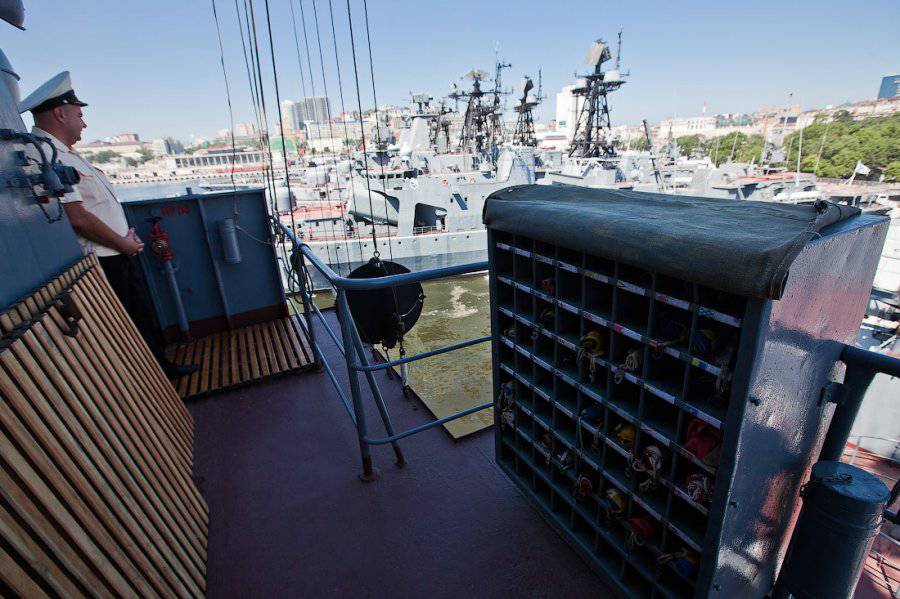 6. Despite modern means of communication, the system of signal flags in the fleet remains the main communication for boats. The navy of the USSR Navy is used at the Russian Navy. The 32 signal flags correspond to the letters of the Russian alphabet: Lead - “Course leads to danger”, Live - “Give average speed”, J - “Found mine”, etc. In this picture - the place of the signalman on the cruiser. In the metal box are the signal flags, which, if necessary, rise on the vertical files on the ray. To the left of the box are black “running balls”, which in the sea denote the speed of a ship. The lower the "ball" - the higher the speed. By the way, "Varyag" can go at a speed in the 32 node. When he walks at such a speed, the breaker astern is ten meters high. 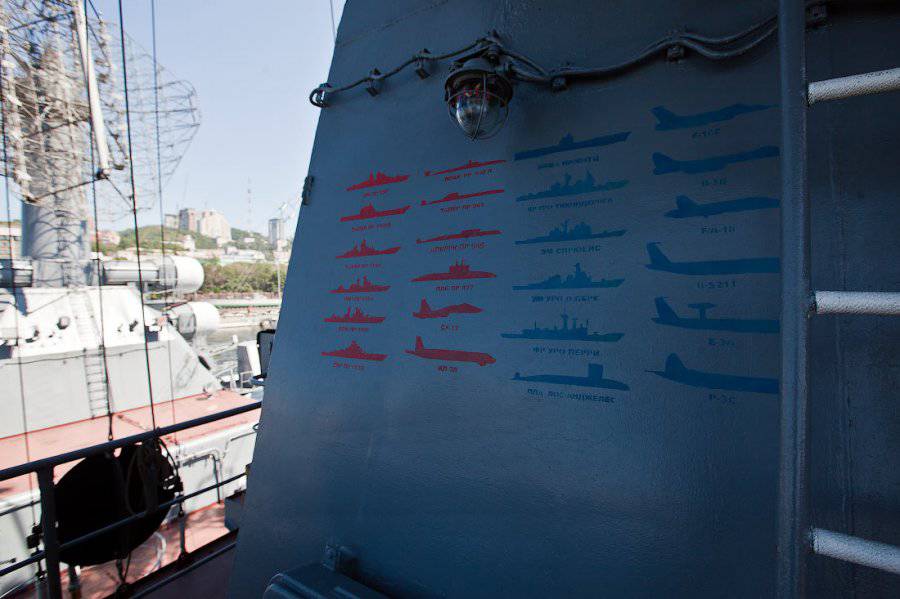 7. "What is it there reds blue?". On the wall - the silhouettes of ships and aircraft of Russia and NATO countries. A hint for the signalman, who is observing what is happening around the ship. 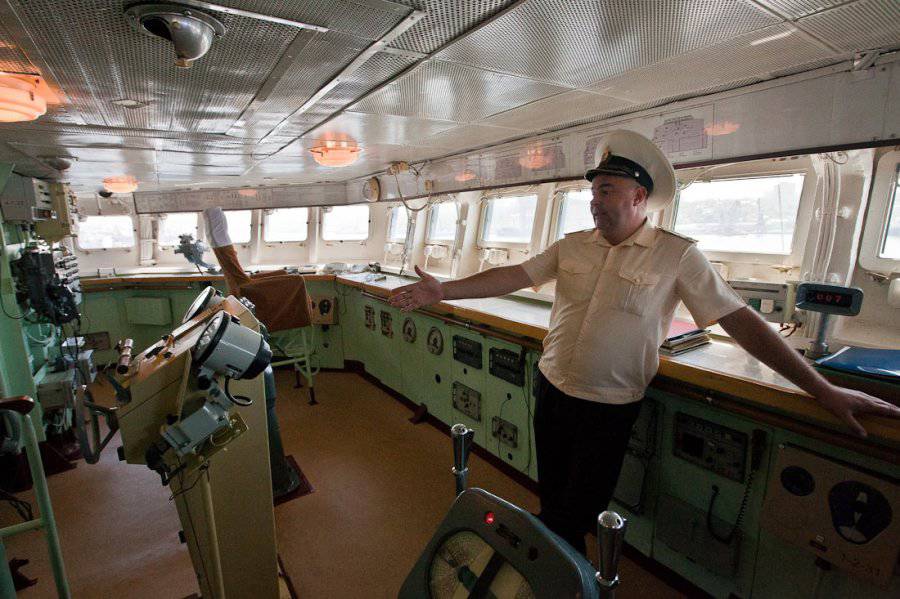 8. This is the wheelhouse of the ship. From here it is controlled in everyday conditions. The wheelhouse is connected to the combat information center of the CMS "Lumberjack-1164" by a commanding elevator. 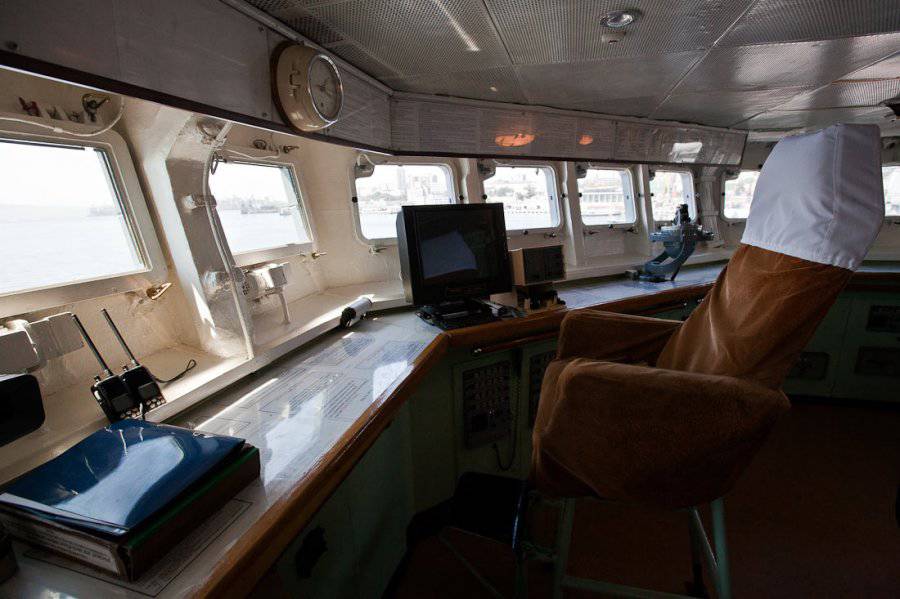 9. The place of the commander of the cruiser Varyag, guard captain 1-th rank Edward Moskalenko. 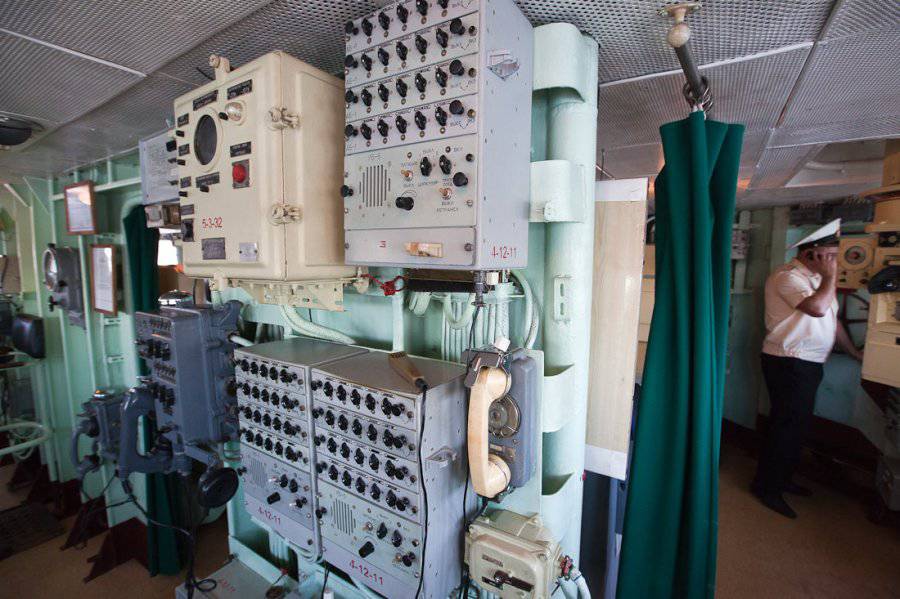 10. Here everything really reminds of 70's. Such reliable-iron. "Warm lamp sound." I tried my best not to photograph anything secret, but go and figure out where that is. 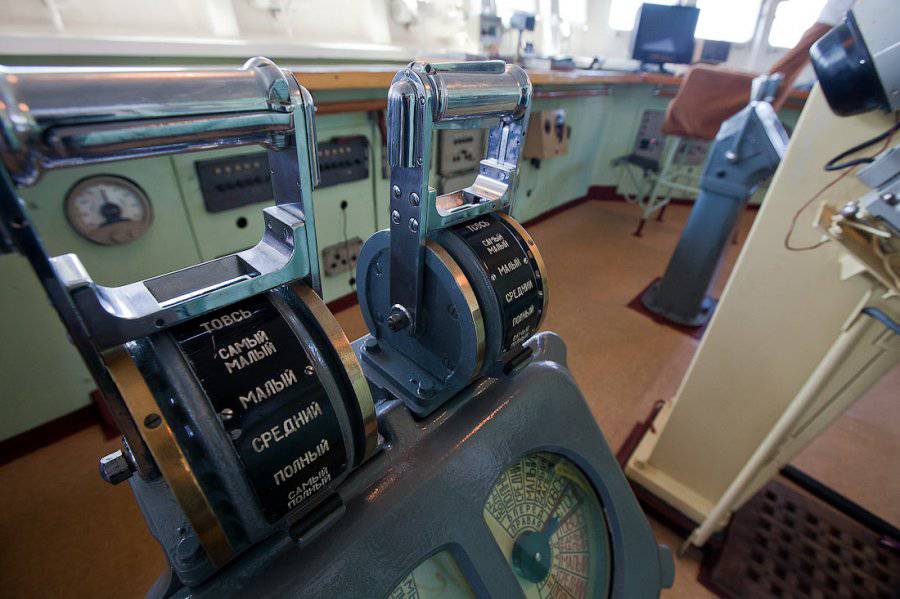 11. "Tovs" - I love these navy words. Huys, Bitting, Twindheck, Southwest, Coaming, Achtershtev, Binnacle - all this smells like a salty sea wind and excites you with indescribable. 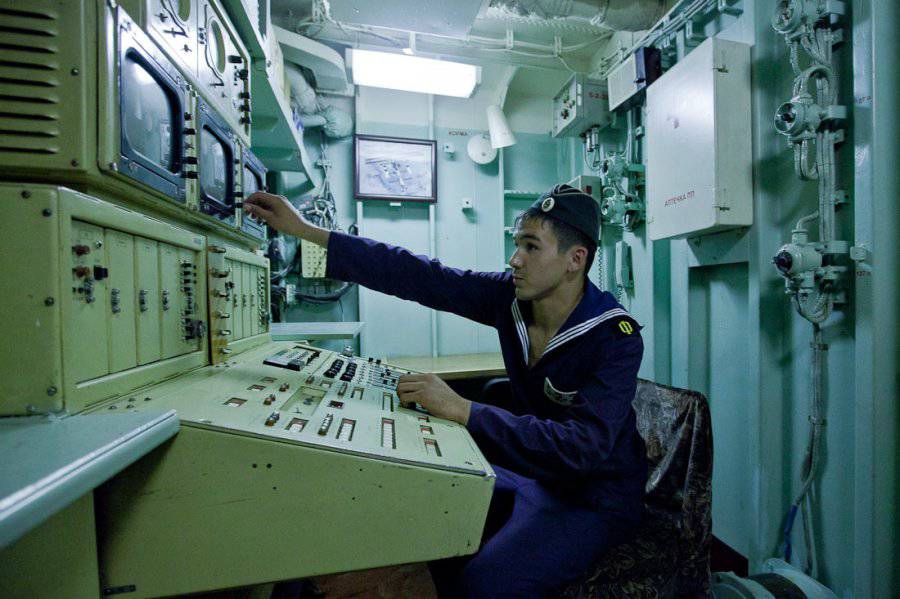 12. Shifts dispersed in places of work. The kavtarangs puzzled: “What would you show such an unclassified?”. They agreed on some screen №22. Sailor Renat from Bashkortostan sat down at the operator’s seat and began to press buttons, turn on monitors - to depict activities at the combat post. It looked quite reliable. 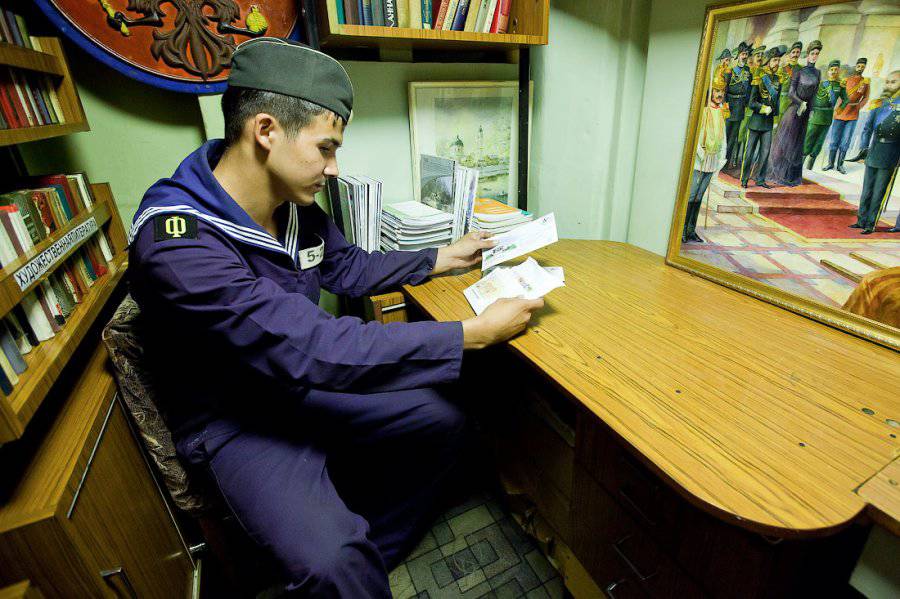 13. The same Renat, untimely caught by the officers, revived the premises of the ship’s library, pretending to parse the mail that came to the ship. The library is good. Little, but everything is there. In general, the Varyag is a rather comfortable ship. The cabins are trimmed with wood, paintings are hung, and there are carpets on the floor. There is a swimming pool with a waterfall, healing showers, a large steam room, a sauna. There are air conditioners in the living cabins, there are four air-cooled refrigerators on the ship. 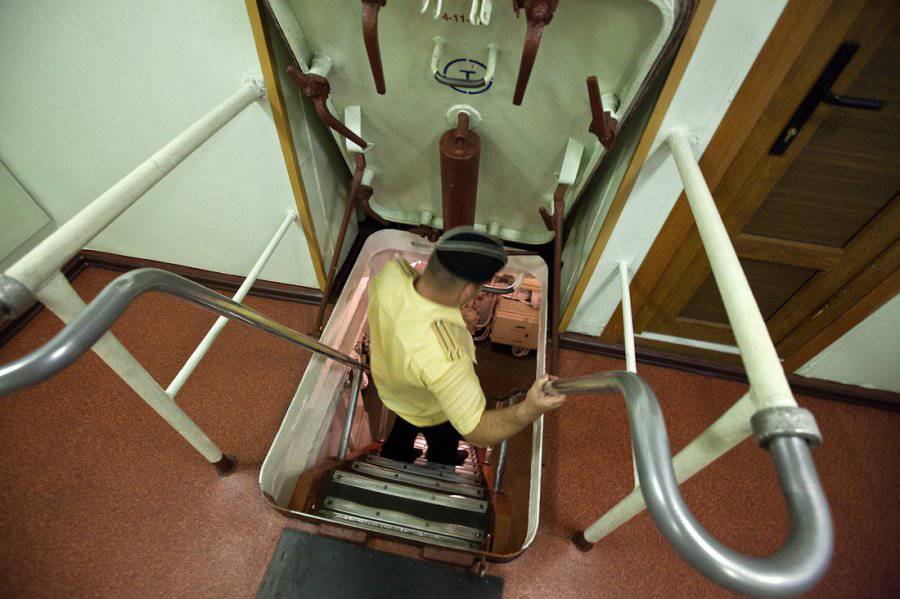 14. Walking through the cruiser is a long transition through endless corridors and sudden descents and ascents along vertical ladders. In the fourth compartment, we descend lower and lower to where the sailors are. Weapons, of course, interesting, but really wanted to see how sailors live on one of the most powerful cruisers in the world. 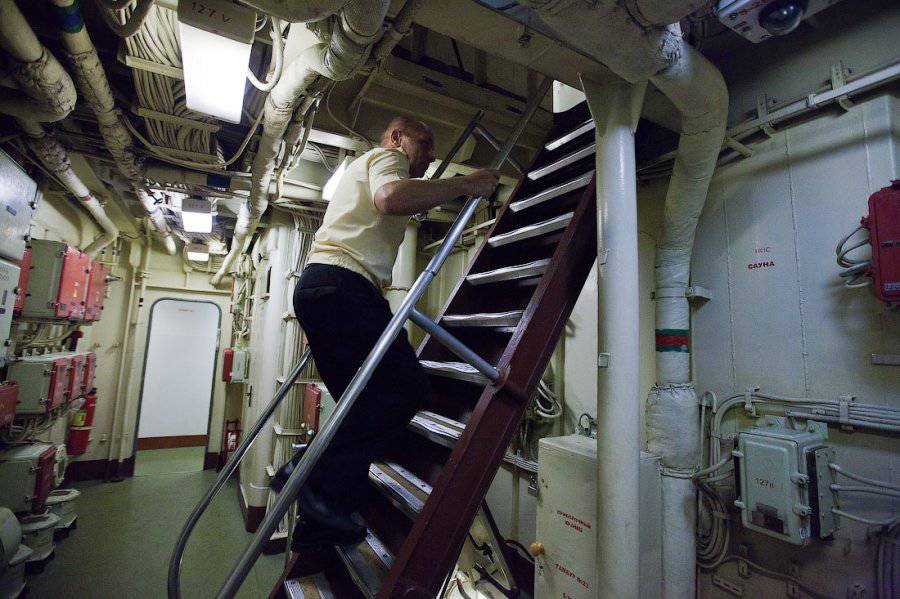 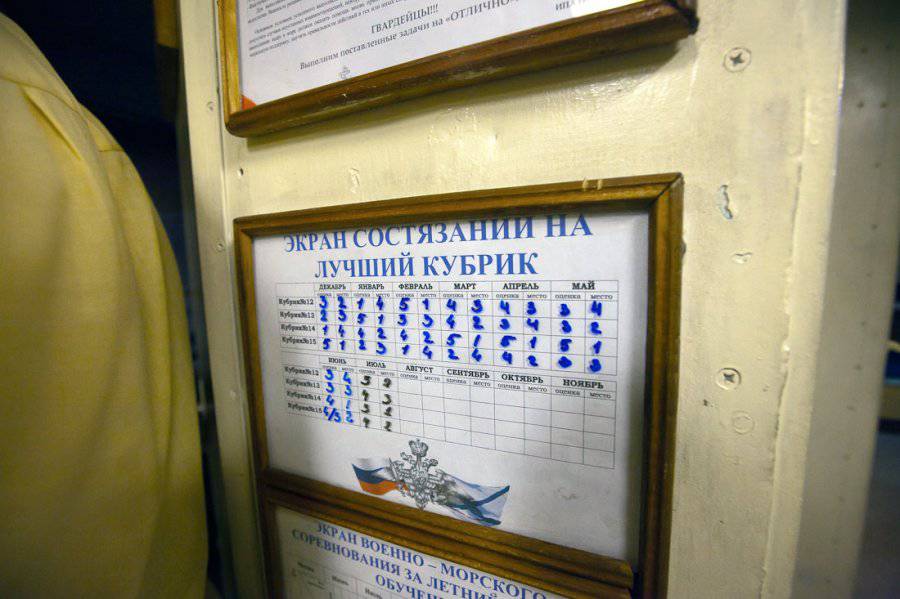 16. On the contest screen for the best cockpit, you can see, for example, that the cockpit No. XXUMX, who scored a bolt on the race in December, apparently got a big star from the commanders and then became the foremost, without dropping below the four mark. 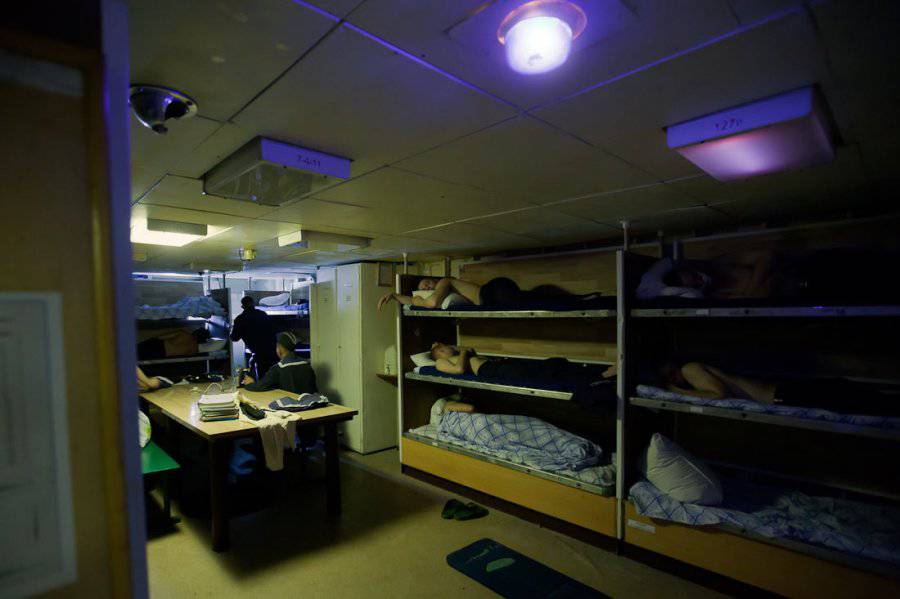 17. So the night shift rests in the model now the cockpit №14. I opened the door for a couple of seconds and took some pictures of the sleeping sailors. 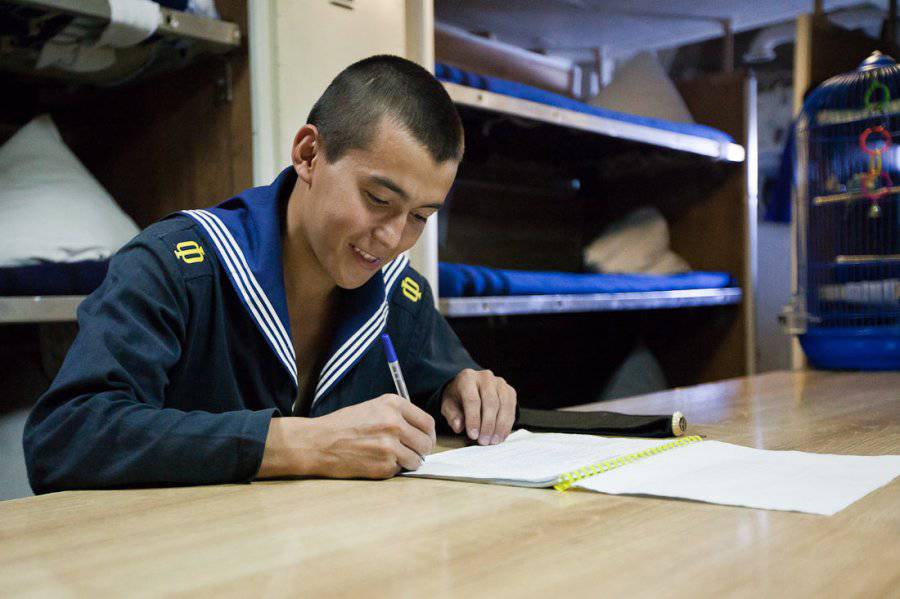 18. In the next cabin, the sailor wrote something important to the magazine. Next to him stands a cage with a parrot screwed to the table. The parrot was there and rested. 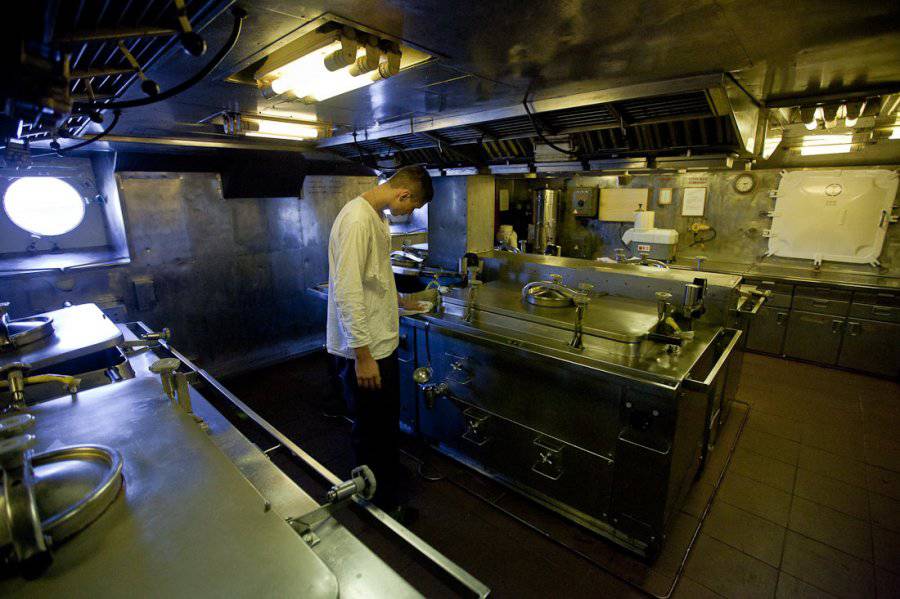 19. Holy-saint missile cruiser - galley. The ceilings here are low and the sailor with a rag in his hand, suggestive of order, walked with his head bowed, which gave his figure a sad look. Nearby two other sailors began to open cans with a simple knife, for which they immediately got a scolding from the officers accompanying me. Everything should be perfect for someone else's look, I understand. 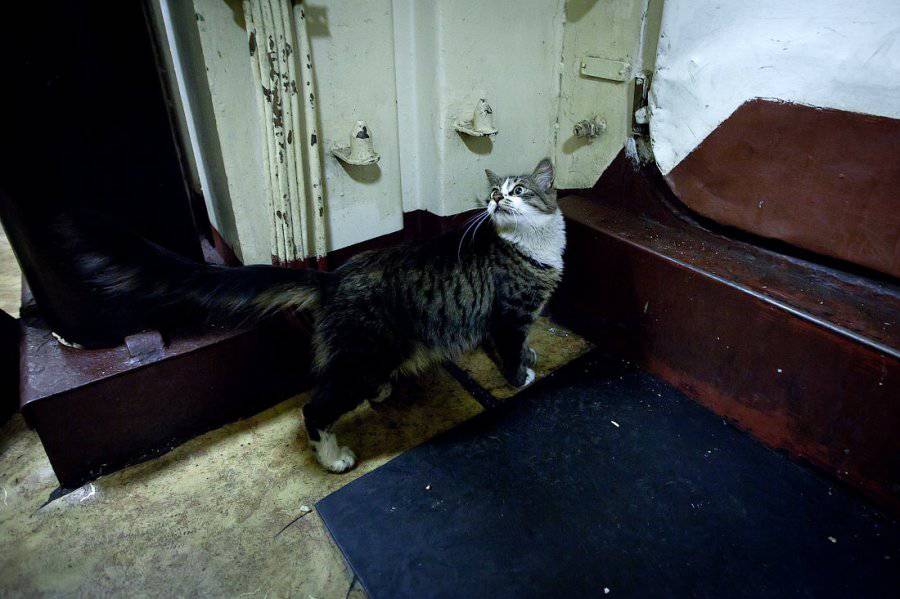 20. Ship kote - an indispensable accessory of any warship for rodent control. Or, as they say here, "squirrels." Seals and vital cables in a metal sheath - these are the conditions for the coexistence of humans and rodents. There are several cats on the ship; they are led one by one to the warhead. Cats cruiser "Variag" are popular with guests in different countries where the ship goes. It happens that they are given - one of the ship's cats now lives in the Orthodox Church in Singapore. Mother, they say, was happy with such a gift. Another was donated to a local admiral in Indonesia. 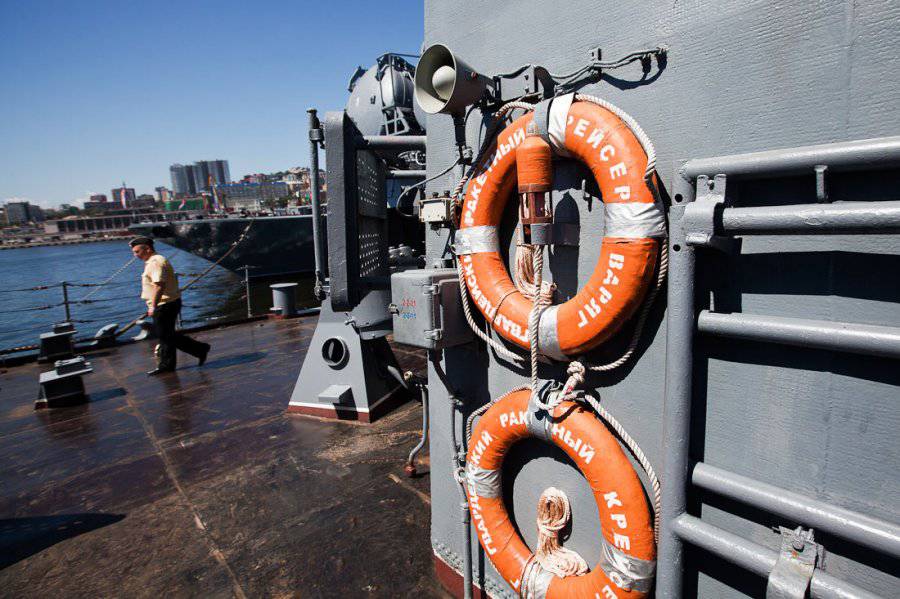 21. I wanted to take one lifeline for memory. The circle was not given, official, but presented another. 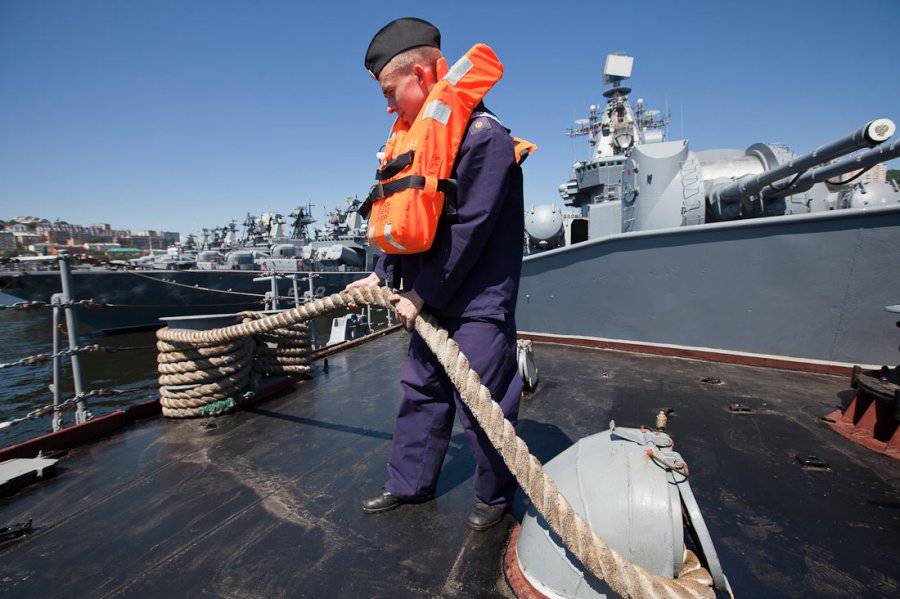 22. We had lunch with the officers, talked, then moved into the working cabin, there still talked. I didn’t want to leave, but time was running out - from them, and from me. Leaving, he took a few more pictures on the deck of the Varyag and on the shore. 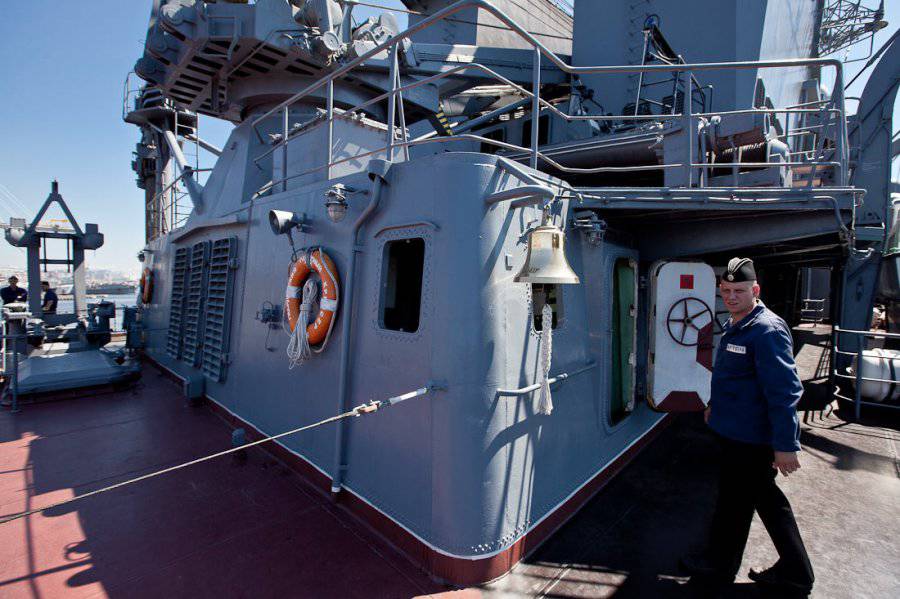 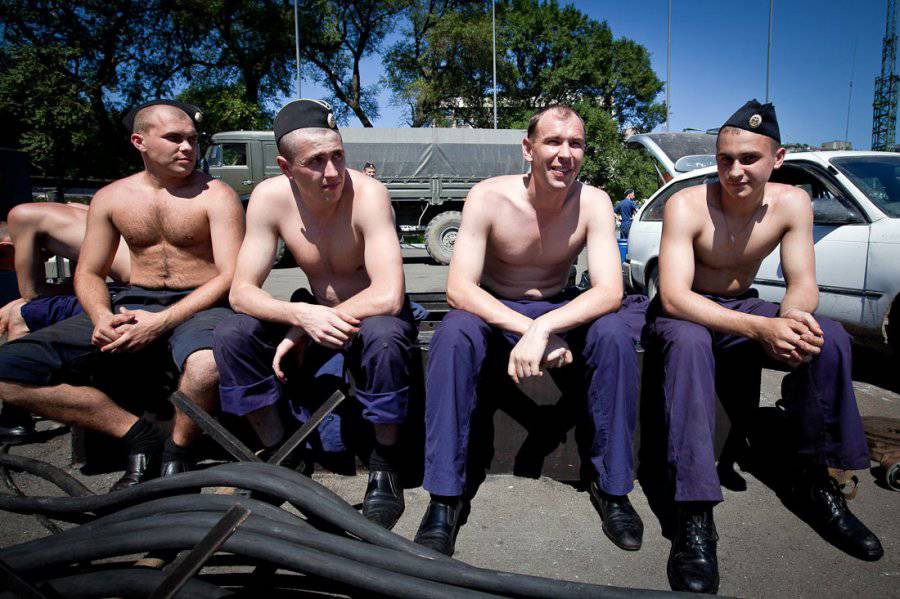 24. It seemed to me that everything was in order on the cruiser. She goes to the sea, conducts shooting practice. “Varyag” is a welcome guest in foreign ports, and queues are formed for him who want to make a tour of the ship. As the officers said: “The French“ Mistral ”stands nearby - no one goes there, and we have a queue at the whole berth, thirty thousand people come in a few days of the visit”. It can be seen how the sailors are proud of their "Varyag", their service. I called for a hike with me - I have to think, I am not friends with the pitching, although I really want to, of course. Because it is the present.
Military Reviewin Yandex News
Military Reviewin Yandex Zen
11 comments
Ad