February 14 2015
33
One of the popular Wild West pistols was the Sharps Four Barrel Pepperbox Pistol. 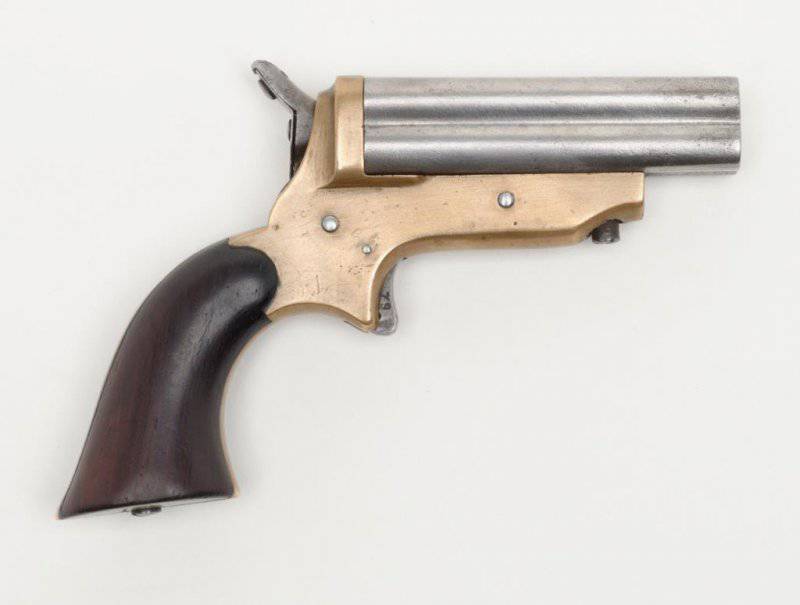 The appearance of the gun is certainly familiar to many lovers stories weapons... The creator of the pistol is Christian Sharps (Christian Sharps 1810-1874), whose arms company Sharps and Company produced, in addition to pistols, also reliable military and sports rifles.

Sharps gun appeared on the market of civilian weapons, when the demand for personal weapons of self-defense was very high. This reason, coupled with multiply charged, ensured the enormous success of the pistol. Of course, the compactness and reliability of the weapon were also appreciated by the consumer. 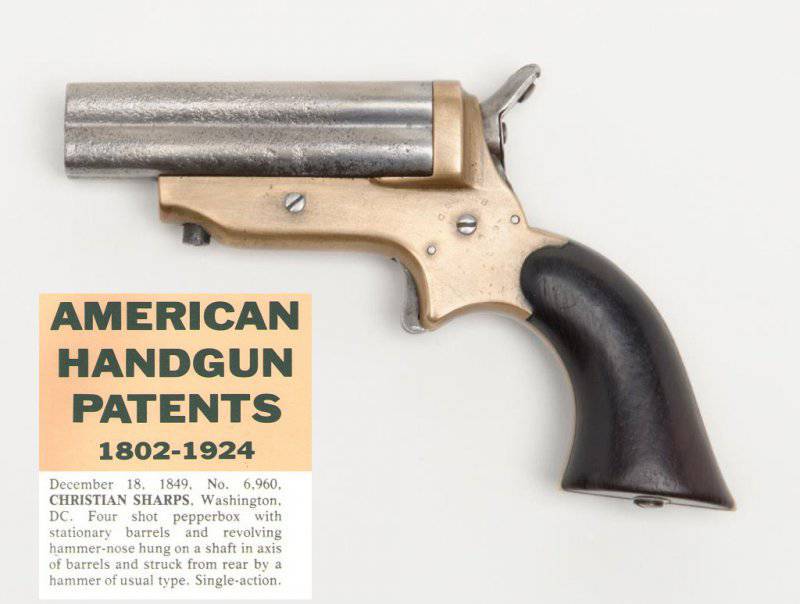 Another 18 December 1849. Christian Sharps received a patent number number 6960, which described the four-barrel "pepper" with fixed trunks and turning drummer. After each cocking, he struck alternately at the primers mounted on the four barrel trunks. This gun was not produced for commercial purposes and the site HistoryPistols.ru could not find his photos. The appearance of unitary cartridges allowed Sharps to continue the development of his project, leaving the general design of the pistol as a basis. 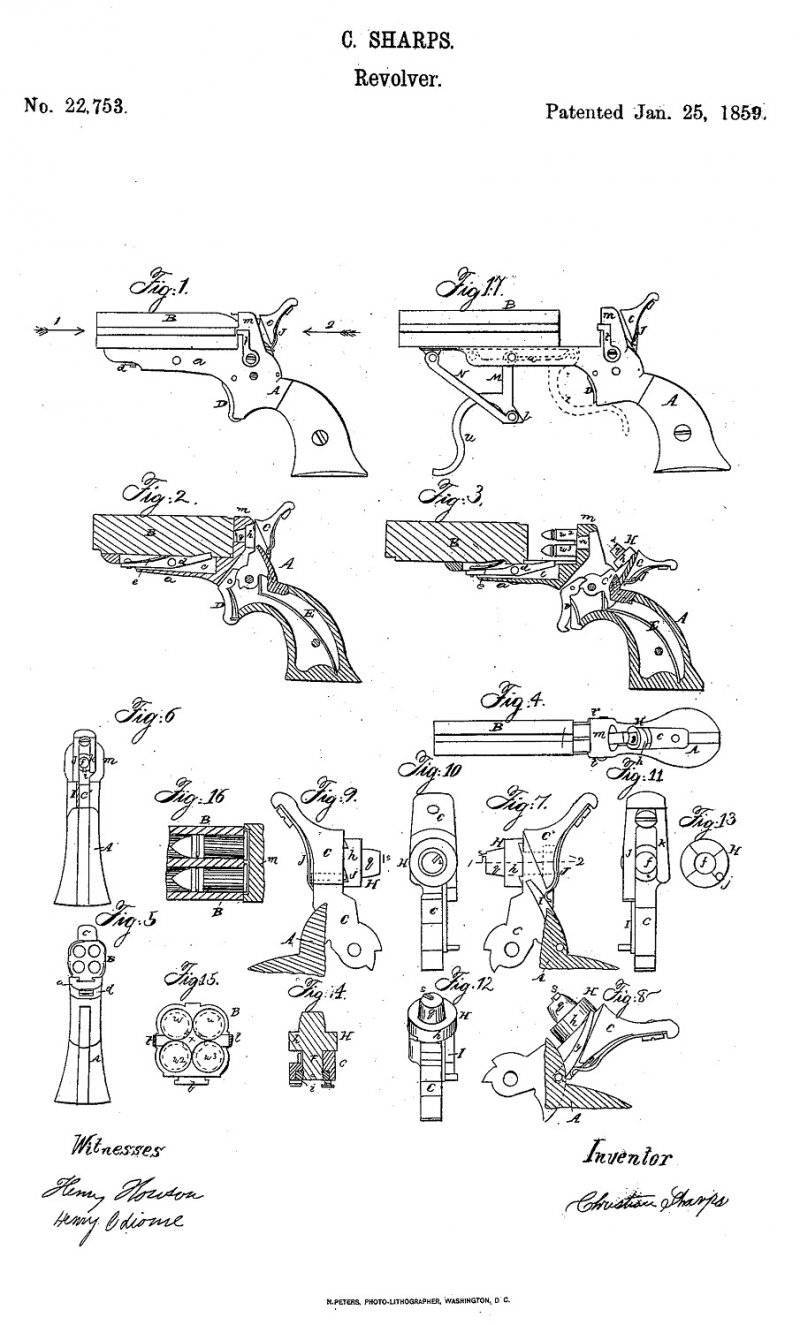 “Let it be known that I, CHRISTIAN SHARPS, a city and county of Philadelphia and the state of Pennsylvania, have invented certain new and useful improvements in the breech of a firearm with a rotating drummer, and I explain this invention with a complete, clear and precise description with reference to the accompanying drawings ... ”This is how the textual part of the patent received by Sharps 25 of January 1859 of the year, No. 22753, begins. From this date began the story of the famous pistol Sharps. 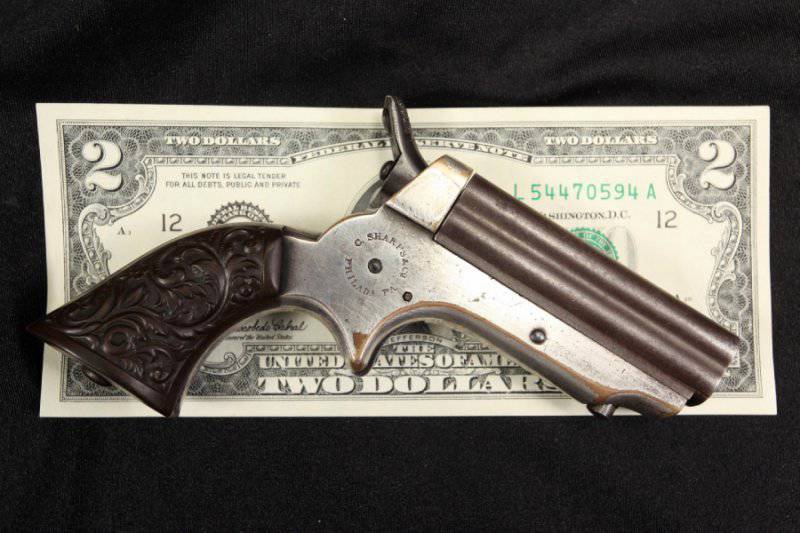 Despite the fact that the title of the patent says “C. Sharps. Revolver ... ”Sharps is of course not a revolver, but a four-barrel pocket pistol. This weapon is sometimes called the “Peperbox” (“Pepper”), although the classic “pepper shakers” usually had a rotating block of barrels. The total length of the Sharps pistol is one of the first 161 mm models, the barrel unit length is approximately 75 mm. 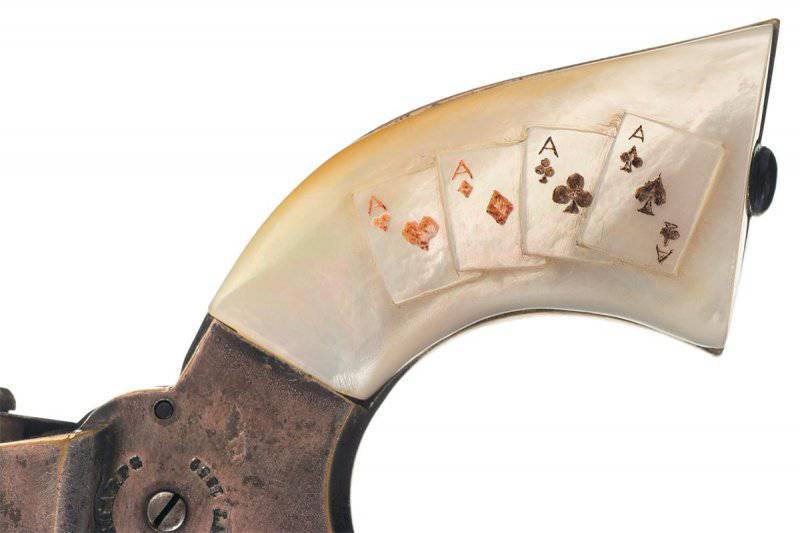 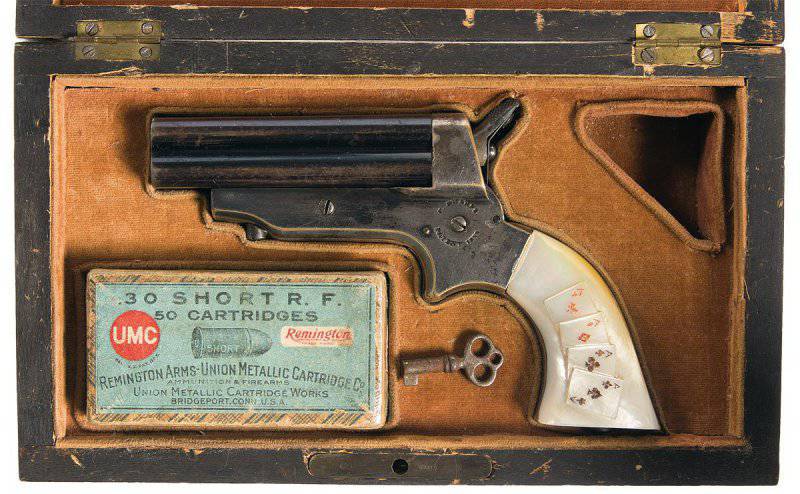 As a spare pistol, designed for concealed carrying, Sharps was used by military and law enforcement officers. The weapons were produced under various ring ignition cartridges. The first models had a caliber 0.22. Later pistols were made for 0.30 caliber cartridges, 0.32 and long 0.32 cartridges. 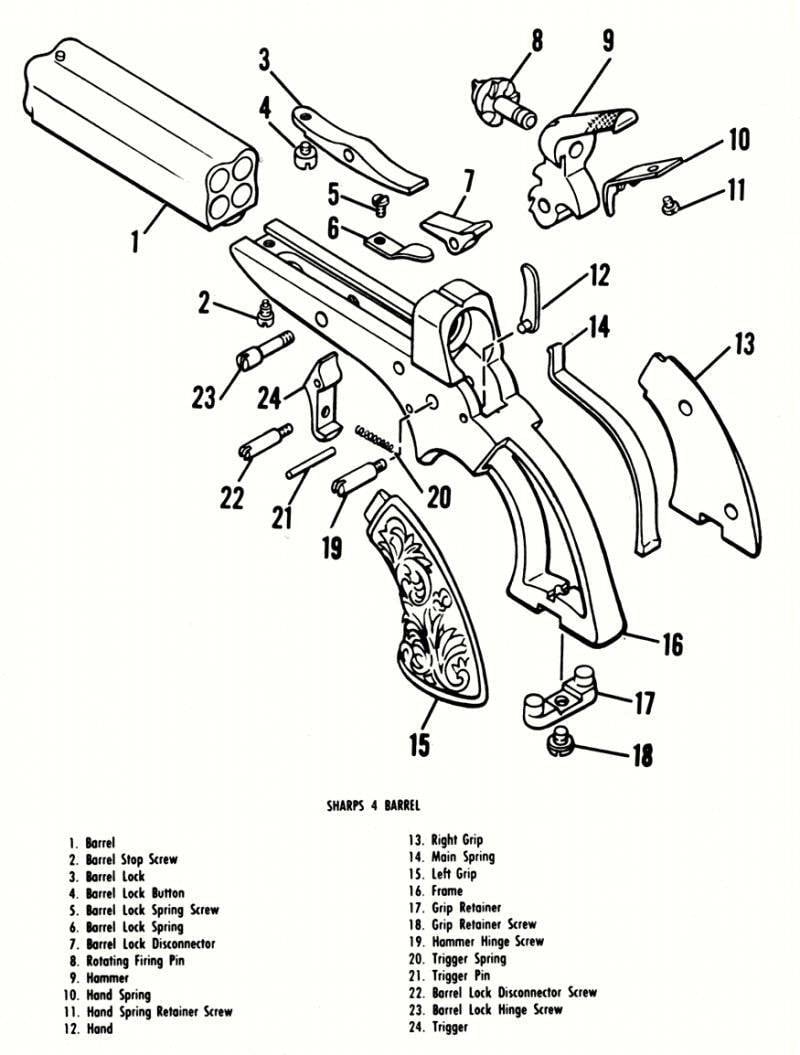 Gun Sharps fairly simple and technologically advanced. The weapon consists of a frame, handle cheeks, a block of barrels, a single-action firing mechanism and a mechanism for fixing the barrels in a frame. 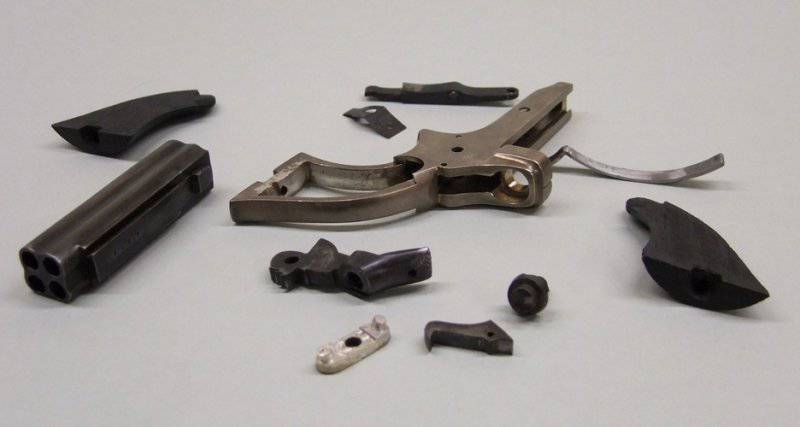 The gun is easily disassembled for cleaning and maintenance, easy to maintain and to use. Perhaps these are the most important qualities that must have a pocket civilian weapons. 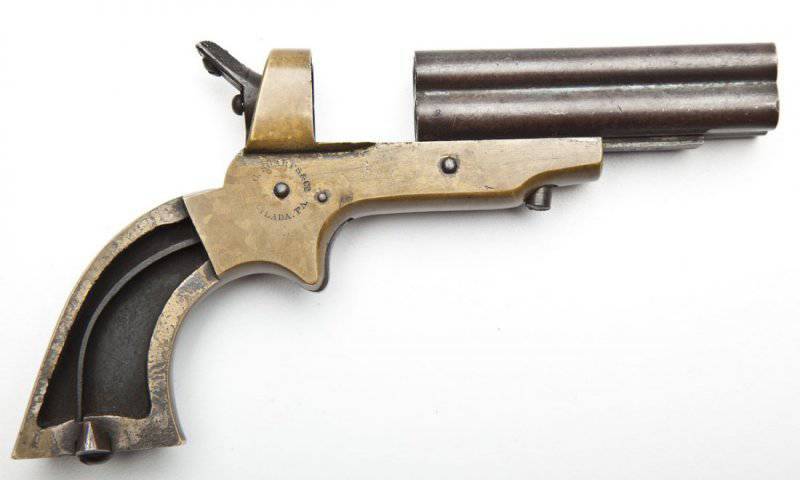 Sharps pistol flat spring is located in the handle. The block of barrels for loading moves forward, opening the chamber of the four barrels. 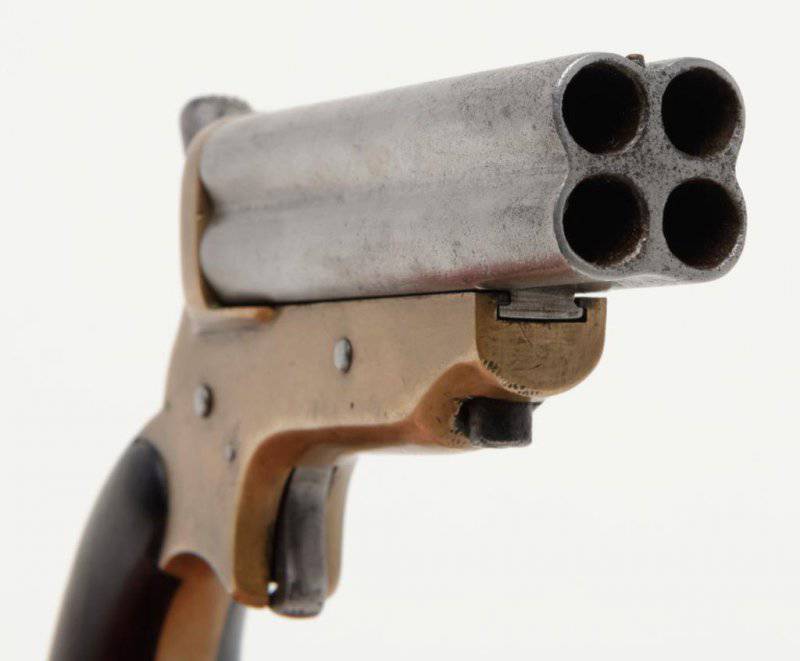 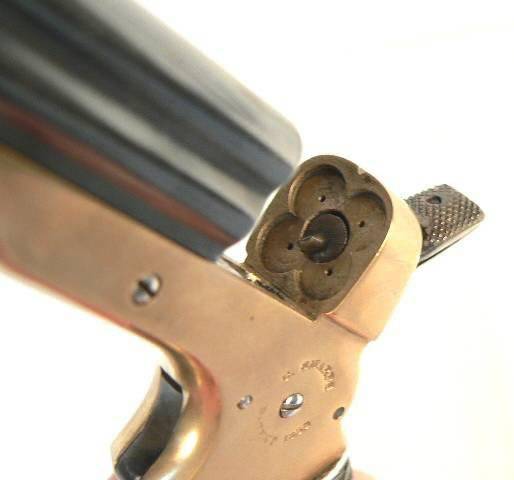 Unusual in the Sharps pistol was the design of a rotating drummer. In the hole of the trigger mounted drummer, which has a ratchet on the back side. When cocking the hammer, a special swivel lever with its end acts on the ratchet, turning the drummer by 45 degrees. In this case, the warhead of the drummer occupies one of four positions opposite one of the four chamber holders of the barrel unit. 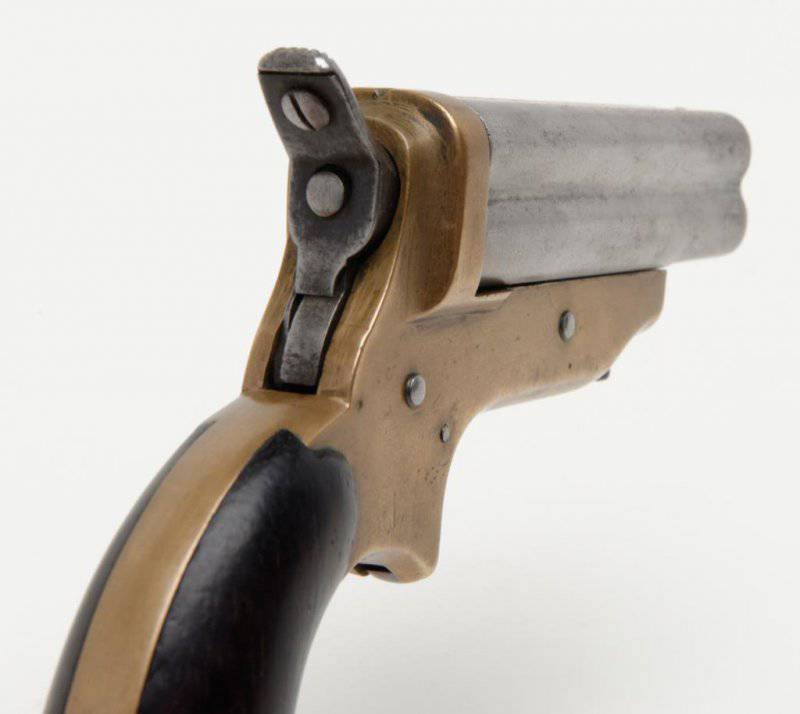 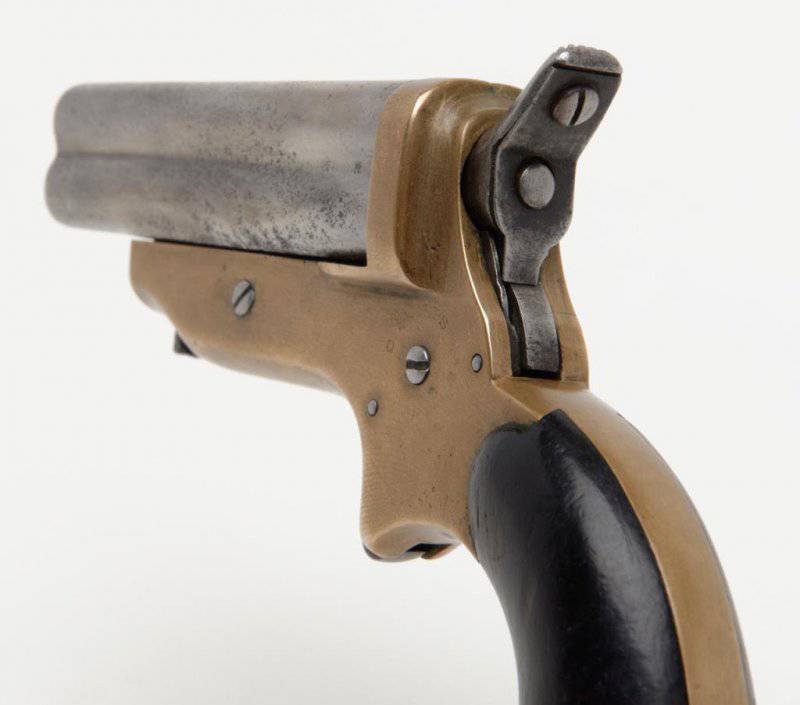 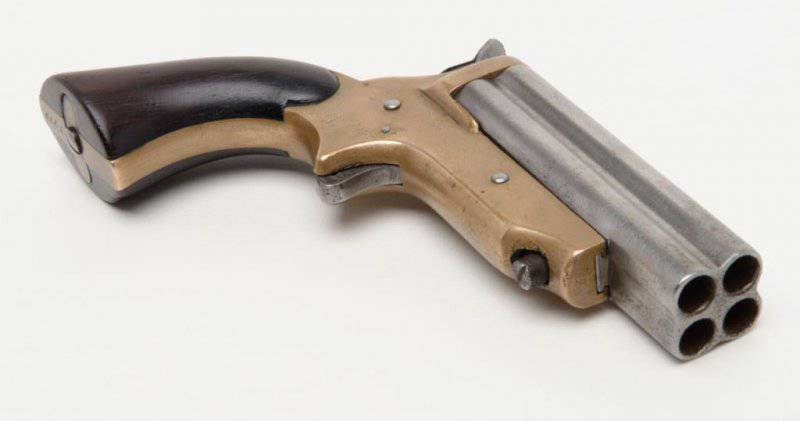 Sharps pistol frames do not have a trigger guard. It is interesting that one of the graphic applications to the patent shows a trigger guard, which is also a lever for moving a block of trunks in a frame. 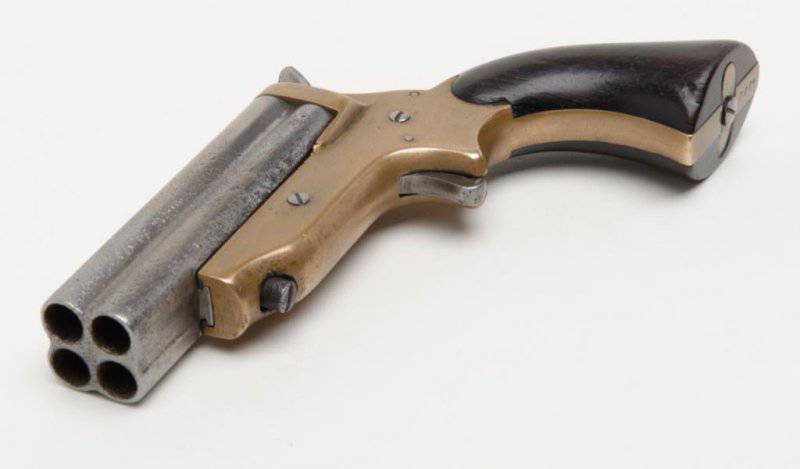 Frames of early pistols were usually made of brass, later models had steel frames. Trigger steel, pacifier type, in the stowed position is covered in the tide frame. 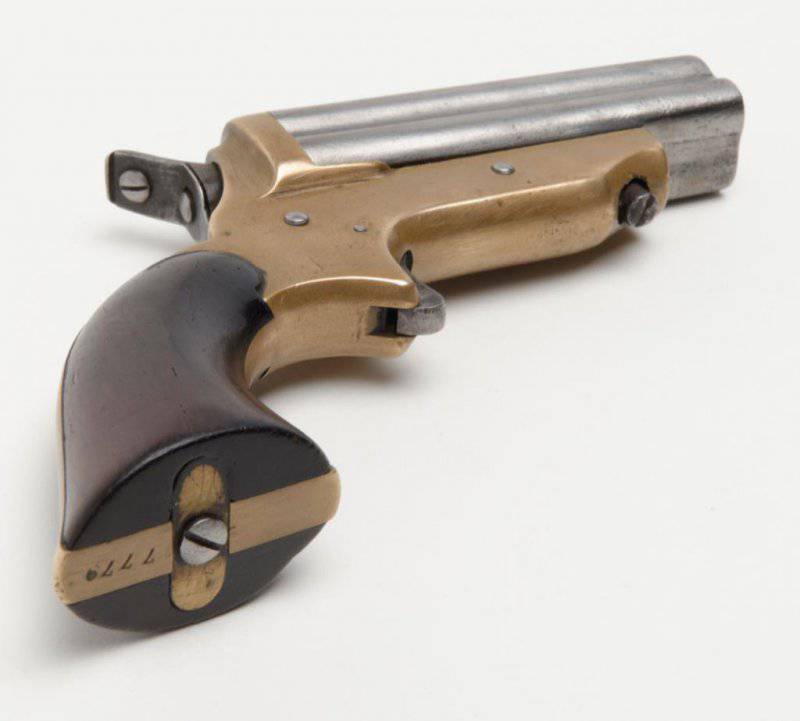 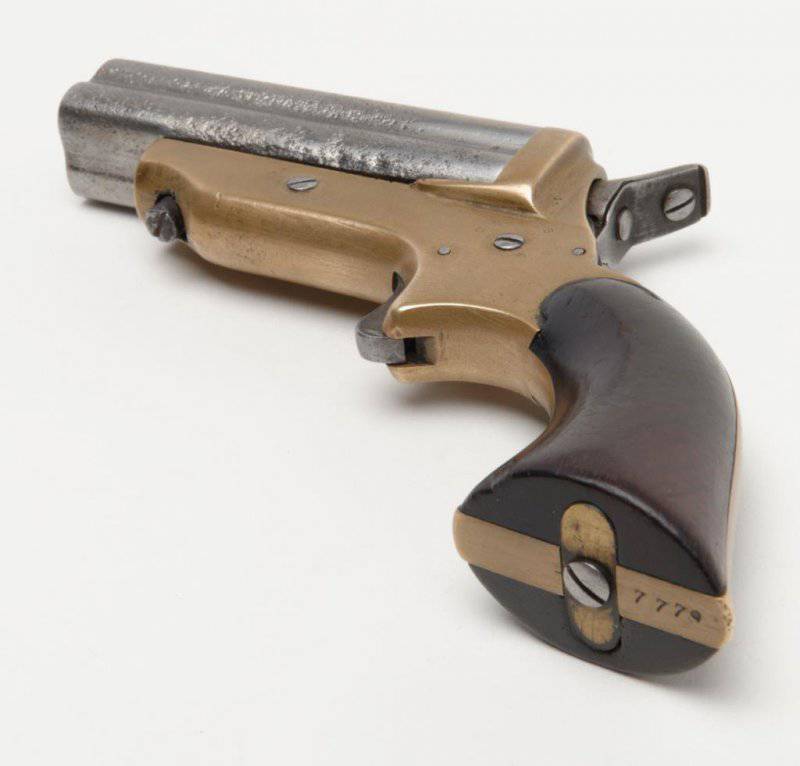 Enough unusual performed fastening the cheeks handle in the frame of the gun. The upper part of both the left and right cheeks are included in the groove of the frame and held in it. The lower part is fastened with a transverse plank with protrusions - the retainer of the cheeks (Grips Retainer). After installing the cheeks in the frame, they are clamped clamp locks. The latch itself is screwed to the bottom of the frame with a screw. 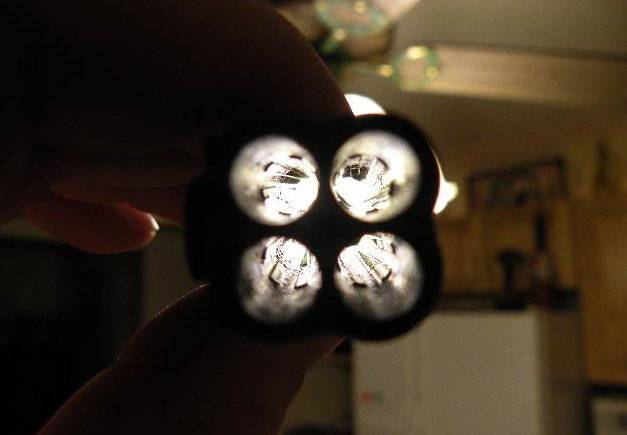 The barrel unit of the pistol has four threaded barrel bore with six grooves in the right direction. The barrel unit is usually not equipped with an extractor. 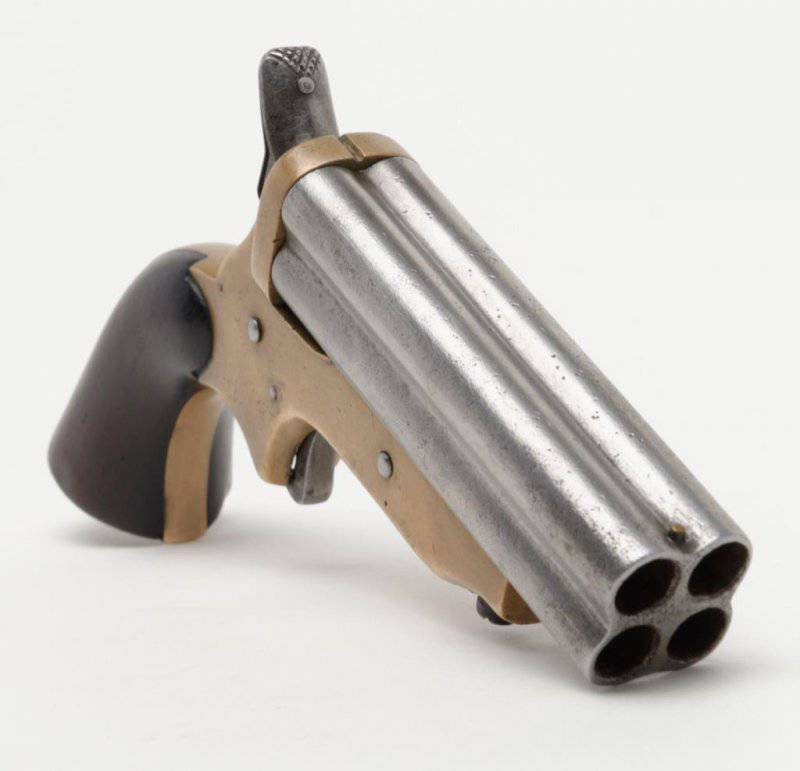 Sharps pistol sights are quite primitive. They consist of a front sight, fortified in the upper part of the barrel unit, and a slot in the breech frame. For a pocket weapon that is designed to fire at a distance not exceeding 10-15 meters, this is quite enough.

On the surface of the frame of the Sharps pistol there is a marking in the form of alphanumeric text applied around a circle. The marking indicates the name of the enterprise and the place of production of the weapon, as well as the year of registration of the patent for this pistol. On the left side of the frame is the text: “C. SHARPS PATENT 1859 ", on the right side" C. SHARPS & CO. PHILADA, PA ". 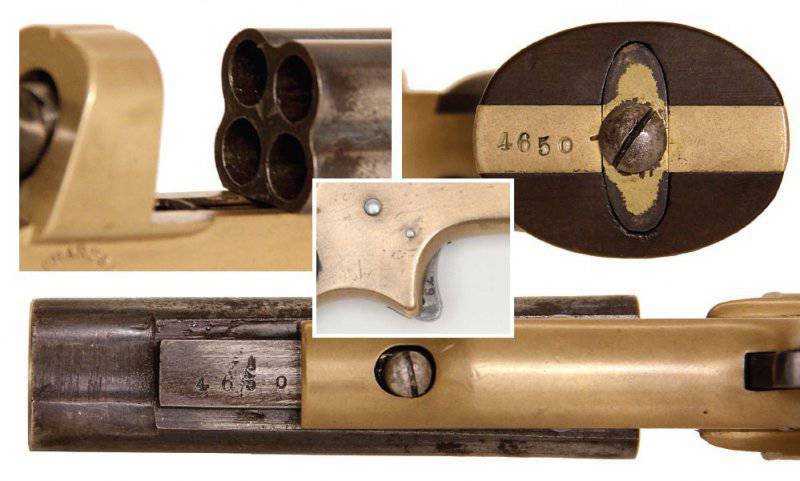 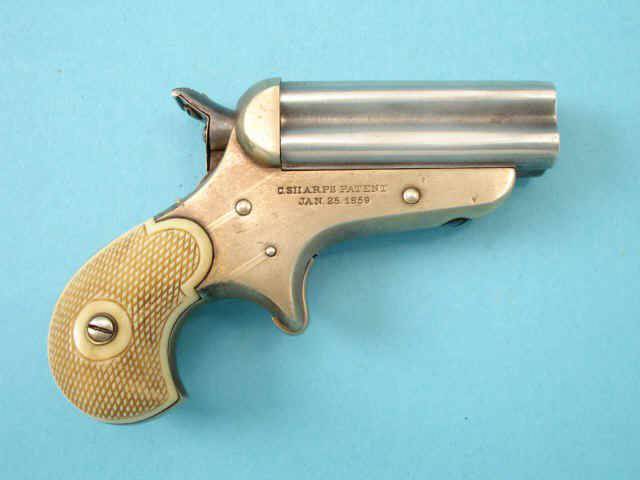 In 1862, Christian Sharps teamed up with William Hankins. The Sharps & Hankins joint venture continued producing pistols. Sometimes a new name of the manufacturer appears in the marking of pistols "ADDRESS SHARPS & HANKINS, PHILADELPHIA, PENN." at the top of the barrel unit. On the right side of the frame, the markings are in two horizontal lines “C. SHARPS PATENT / JAN. 25, 1859 ". In late-release pistols, the grip cheeks were attached to the frame with a simple screw. 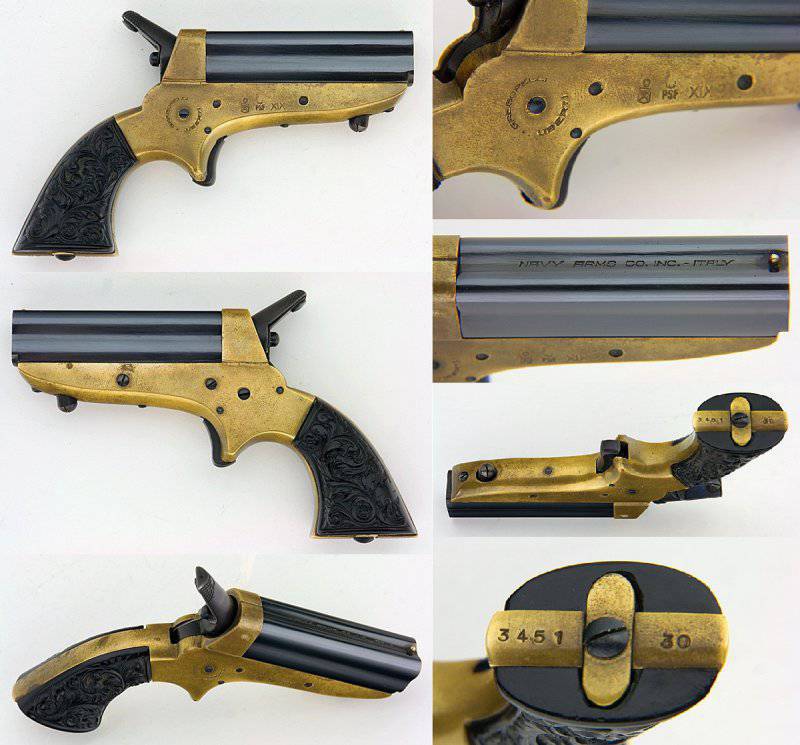 The great popularity of the Sharps pistol is evidenced by the fact that the Italian company Uberti is currently releasing a replica of the famous four-barreled derringer. The markings of the pistol replicas produced by the Italian company Uberti differ significantly from the markings of the original weapons of the Sharps and Company and Sharps & Hankins companies. 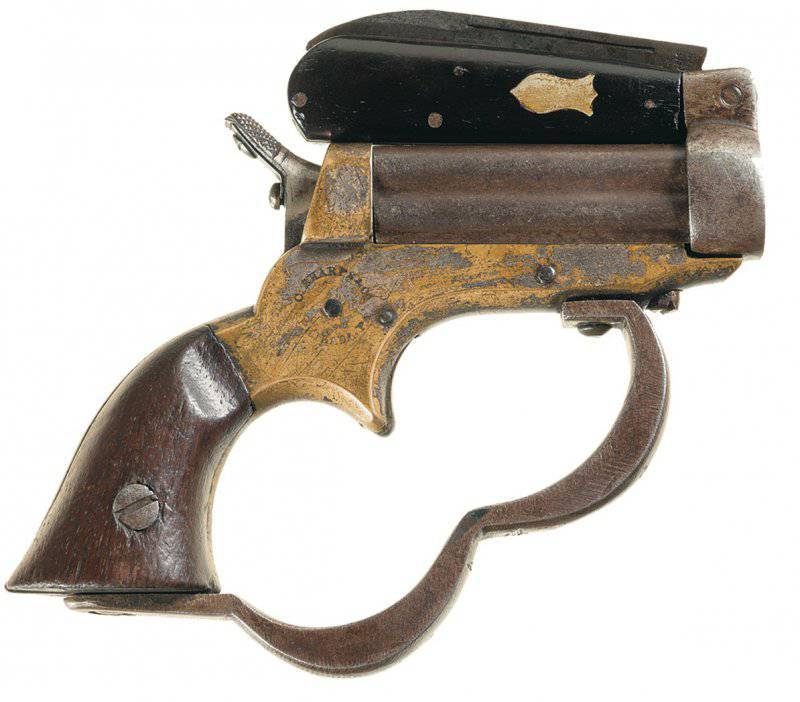 Sharps pistol is quite common at gun auctions, especially in the United States. Sometimes weapons are put up for sale in a very unusual design. The gun shown in the photo is a combination of a firearm and a cold weapon. 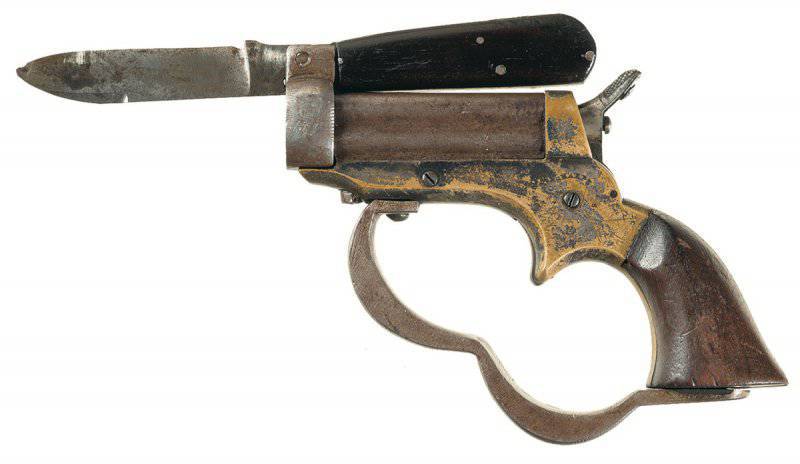 Installed in the upper part of a folding knife, fixed with a ring on the muzzle cut of the barrel unit. For this purpose, a slot is made above the lock button. A framed steel plate is fixed in the frame, which probably not only performs the function of protecting the hand, but also serves as a striking part — a brass knuckle. 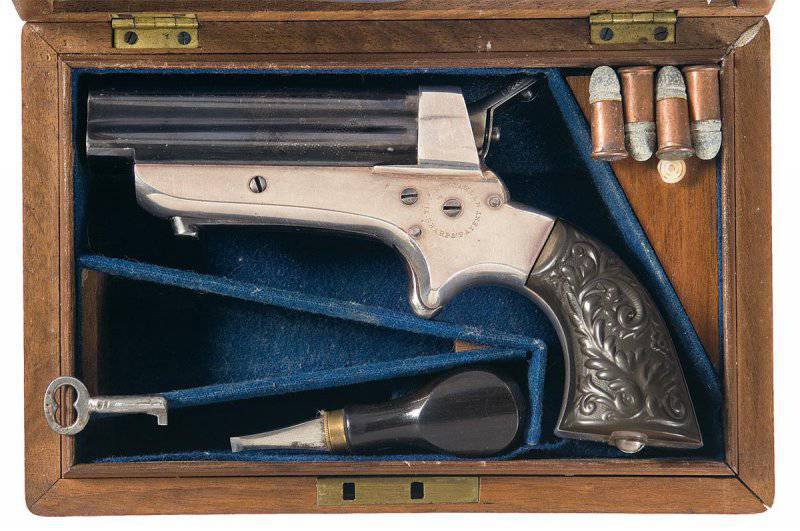 Sharps pistols were produced from 1859 to 1874 in large numbers. The exact number of manufactured pistols is not known, but judging by their serial numbers, there were about 100 thousand. After the death of Christian Sharps, the rights to manufacture the pistol were acquired by Tipping & Lawden from Birmingham (England), which produced not only weapons of the usual caliber, but also 6 mm, 7 mm and 9 mm for European consumers. Sharps British pistols were produced from 1874 to 1877.

In the antique market, four-barreled Sharps pistols are in constant demand. Weapons can adequately replenish collections of museums and private collections. The average price of original pistols in good condition is 1,5 thousands of dollars. The price of rare Sharps pistol models in the original weapon box, with a set of accessories and preserved ammunition, can reach 10 thousand dollars.