Armored vehicles of Yugoslavia. Part of 4. Disintegration of the country (1980-1991)

February 20 2015
11
During the life of Tito to replace the outdated M-60P armored personnel carrier, Yugoslav designers began to develop an infantry fighting vehicle under the symbol M-80. Serial production of the new BMP began in the year 1980. 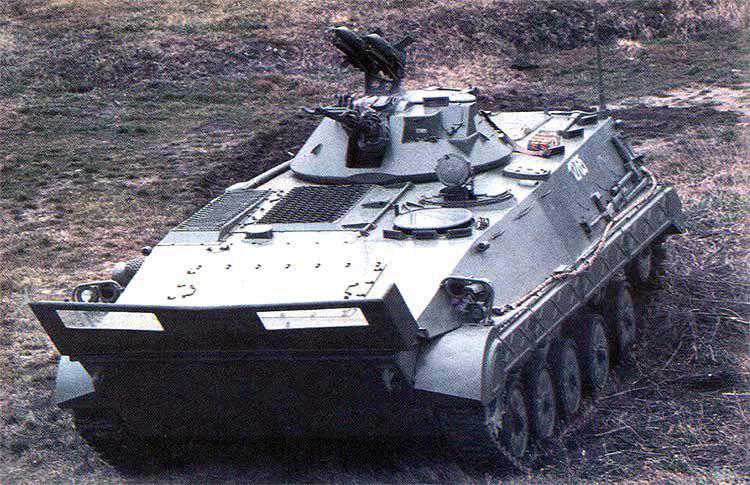 The French specialists from the company “Hispano-Suiza” made a considerable contribution to the creation of the new Yugoslav BMP, so the machine was a cross between the Soviet BMP-1 and the French AMX-10Р, but it also had its own distinctive features. The undercarriage used some elements of the M60P armored personnel carrier. 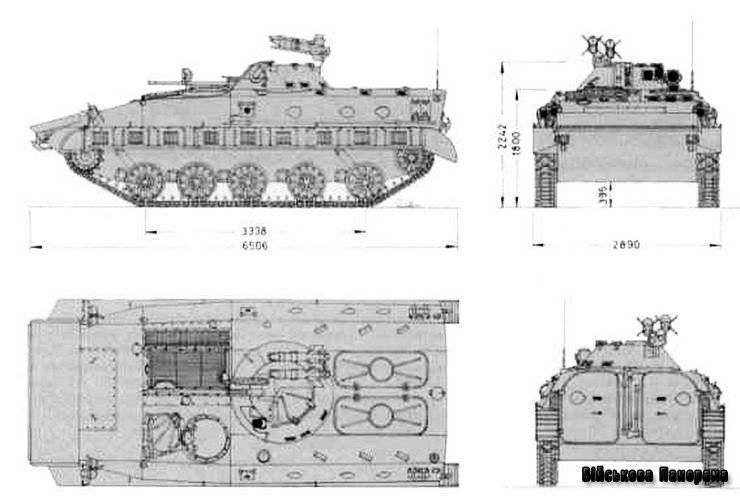 The M80 infantry fighting vehicle had a classic layout for this type of vehicles. The engine and transmission compartment (on the right) and the control compartment (on the left) are located in the forward part of the hull. Behind the driver is the commander's seat, which has its own hatch and is equipped with a day / night surveillance device. The commander's turret can rotate 360 degrees. In the middle part there is a single tower, which forms a fighting compartment with the turret space. Behind him in the stern of the machine are places for landing. The body is welded from steel armor plates having rational angles of inclination.

In the fighting compartment, the gunner’s operator’s workplace was equipped and airborne armament with guidance drives and observation and aiming devices, gun and anti-tank systems, and fire-fighting equipment cylinders were installed. The main armament of the BMP is the 20-mm M55 automatic cannon (produced in Yugoslavia under the license of Ispano-Suiza) with ammunition in 400 shots that can fight enemy light armored vehicles and low-flying targets. An armor-piercing projectile is capable of penetrating 20-30 mm of armor at a distance of up to 800. The X-NUMX-mm M-7,92 machine gun is paired with a cannon, its full ammunition load is 53 cartridges. At the rear of the turret, a dual launcher of the anti-tank 2250М9М "Baby" is equipped with semi-automatic hovering by wire (Soviet-made), two more missiles are being laid in the fighting compartment, recharging is done manually through the hatch of the gunner-operator in the roof of the tower. A combined day / night illumination sight is located on the left side of the tower. The sight head can be rotated in a vertical plane, which allows it to be used as an anti-aircraft gun. Seats for 14 shooters with individual periscopic observation devices are located in the troop compartment. Embrasures for firing automatic rifles are equipped with powder exhaust gas blowers and sleeve catchers. The landing in the car and disembarking from it are made through two hermetically closed doors in the stern sheet. Two more hatches are located in the roof of the troop compartment.

The HS-115-2 engine with 191 kW power, the main clutch, the gearbox and the planetary rotation mechanisms are arranged in one block. Also in one unit combined elements of the engine cooling system and air cleaner. MTO access for maintenance and repair is carried out with the help of two hatches located in the upper frontal and upper right armor plates. The BMP has a maximum speed on the highway to 58 km / h, while the power reserve is 500 kilometers.

During serial production, a new, more powerful FAMOS-80B-10 engine (003 kW power output) was installed on the M235, which increased the power density of the vehicle and, accordingly, the speed, which was 65 km / h on the highway and 7,8 km / h. afloat. This modification was designated MXNUMHA. 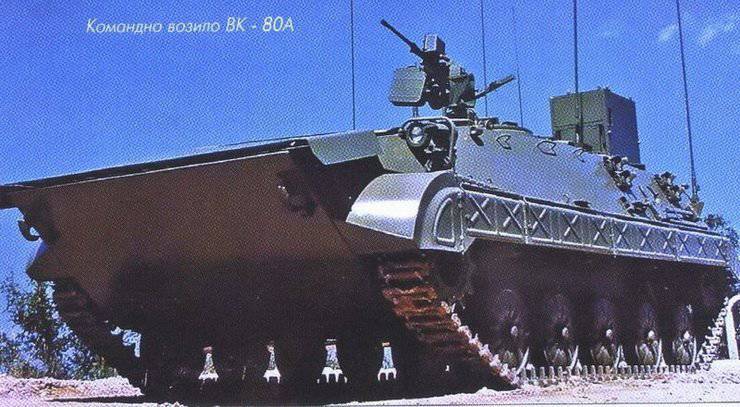 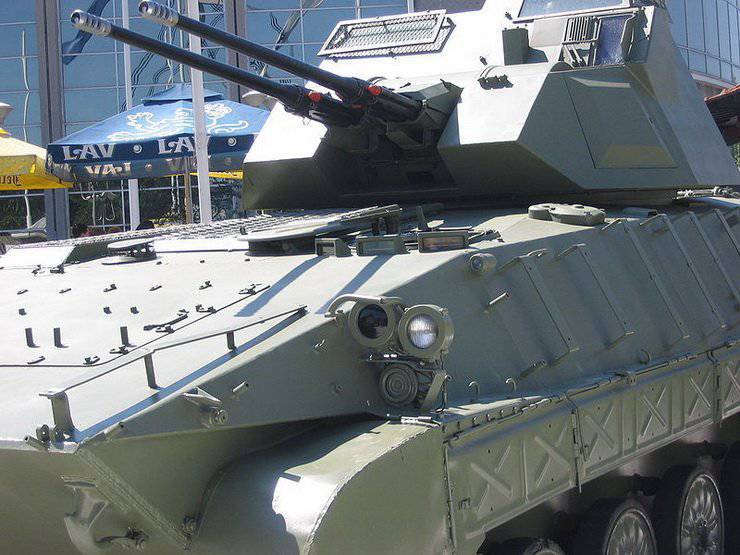 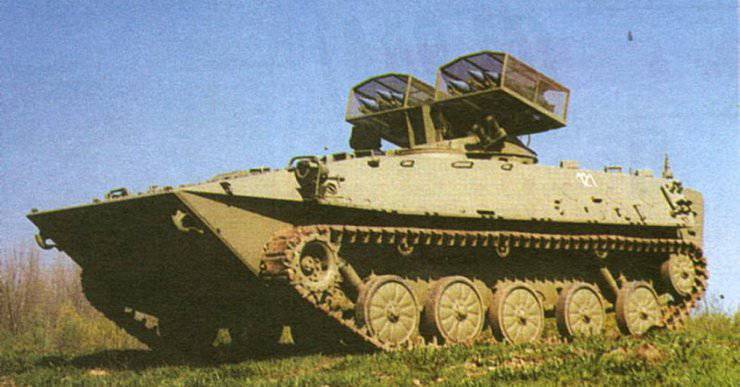 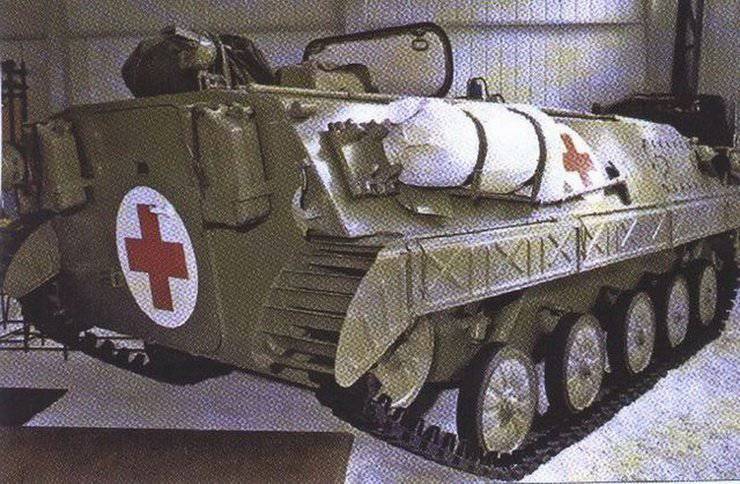 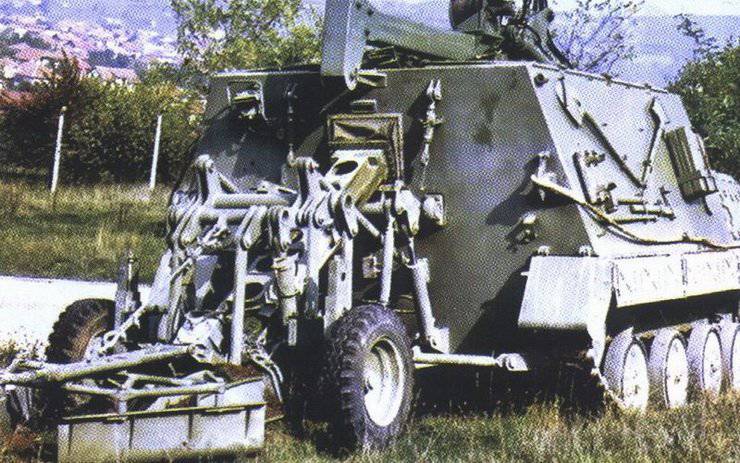 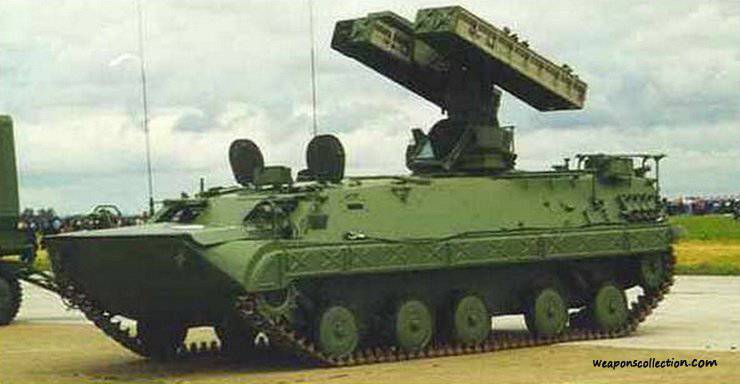 In 1978, in Romania, 40 wheeled armored personnel carriers TAV-71M-Romanian bearers were purchased by the Savi 60-140 French engines, with a much more powerful propulsion system with French 797-05 engines, increased by the angle of elevation of turrets. bombardment of air targets, as well as a number of other minor changes. Deliveries were made in two batches in 1980 and 1981. But in service with the JNA armored personnel carriers did not last long and were transferred to the police. 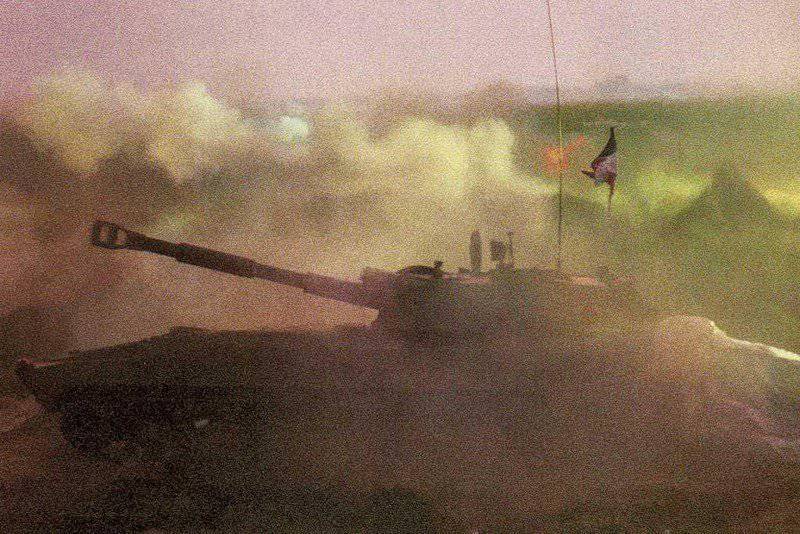 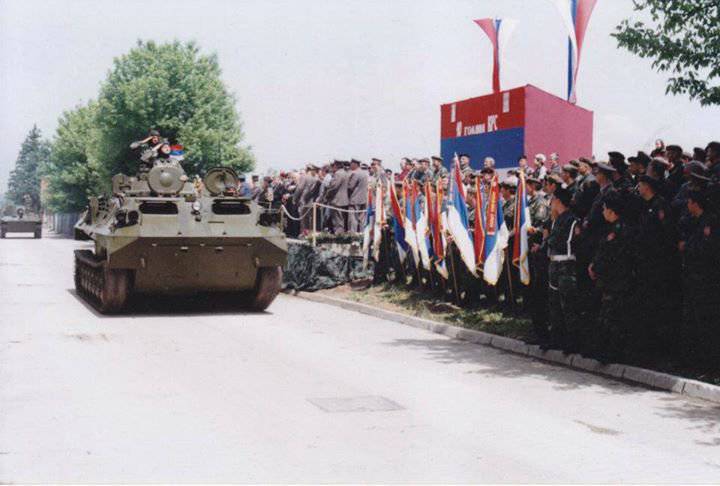 At the end of 70, the Yugoslav firm TAM from Maribor (Slovenia), on the basis of the Soviet BRDM-2, developed the BOV family of wheeled armored vehicles. All variants of the armored car have the same layout: in the front part there is a control compartment, then a fighting compartment, and behind it is the engine-transmission compartment. Ahead are the driver and commander. Over their seats in the roof of the hull there are hatches. Armored cars were equipped with six-cylinder diesel engines with air-cooled F 6L 413F power 148 l. with. allowing to reach speeds up to 95 km / h. The engines were manufactured under license from Germany. Manual gearbox, five speeds for driving forward and one - back. The armor protection consisted of steel plates 8 mm thick. The main tasks of the machine were the fight against saboteurs, the protection of important objects and countering the unrest.

The armored car was produced in several versions: 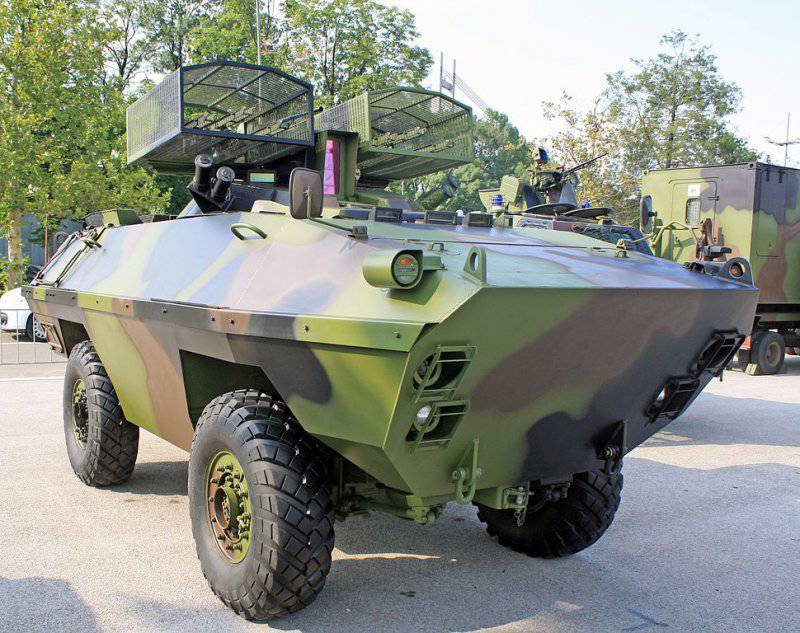 Equipped with two containers with three launchers of upgraded anti-tank missiles 3М14 "Baby", produced in Yugoslavia under license, each. The containers are mounted on a rotating turret mounted on the roof of the crew compartment. It is not possible to reload launchers from inside the hull. 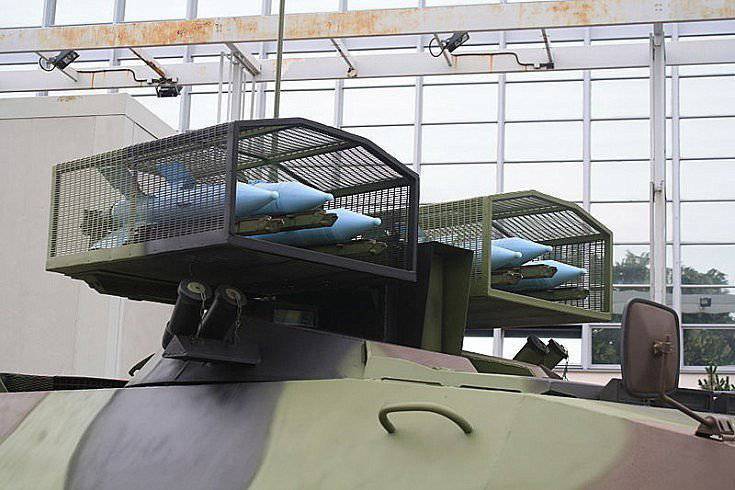 The appearance of the armored car has changed a bit - instead of cutting, which was available to the landing variant, a tower with ATGM launchers was installed. In front of the driver’s hatch there are three inspection devices and one in front of the commander’s hatch. And the hatches themselves are located in the upper part of the forward inclined armor plate.

BOV-1 was created as a replacement for the obsolete Soviet ATGM 2P27 "Bumblebee", set back in Tito and as an addition to the ATGM 9P122 and 9P133 "Malyutka", supplied from the USSR. 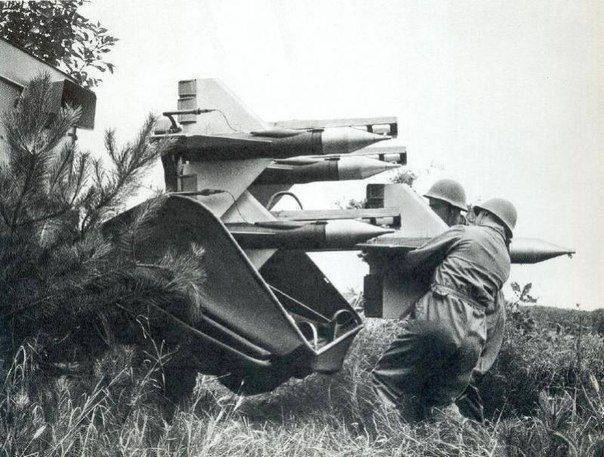 ATGM 2P27 "Bumblebee" on the teachings of JNA 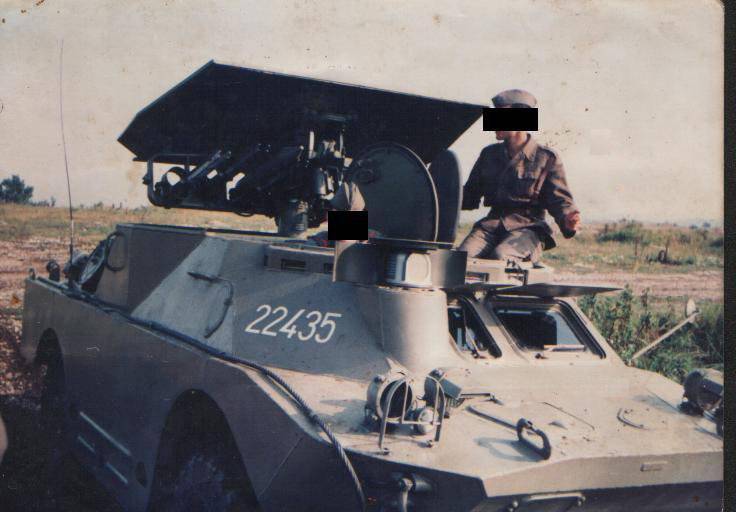 BOV-3 - BTR version of the air defense. During the development, it was decided to equip it with a licensed version of the HS804 Hispano-Suiza gun - a M55 A4B1 gun. Rate of Fire - 750 shots per minute. The effective range of ground targets is 2000 meters, and air targets are 1500 meters. A significant disadvantage of the ZSU was the placement of stores on 60 shells, each on top of the guns. Thus, as with the BOV-1, recharging from the inside is not possible. The rest of the ammunition from the 22 stores was in the turret. It is equipped with a J-171 optical sight. 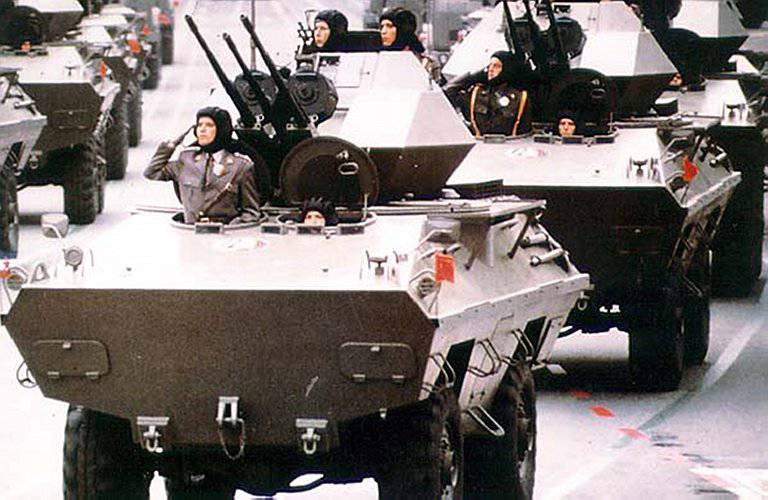 The BOV-30 is a prototype BTR air defense with a double-mounted 30-mm gun. In mass production did not go, it was produced only a few copies. 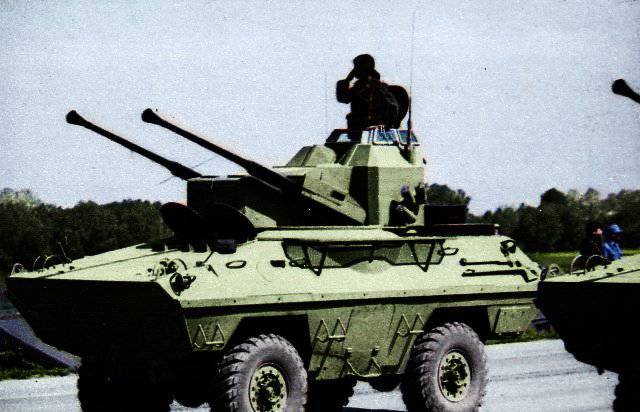 BOV-M - an armored personnel carrier for the police. This version is armed with a smoke grenade launcher and 7,62-mm and 12,7-mm machine gun. 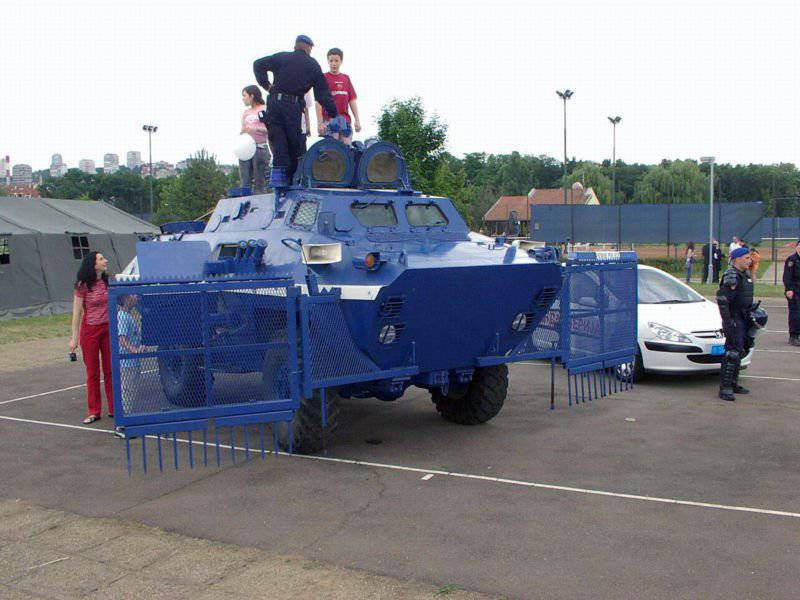 BOV-SN is a version of an ambulance car. 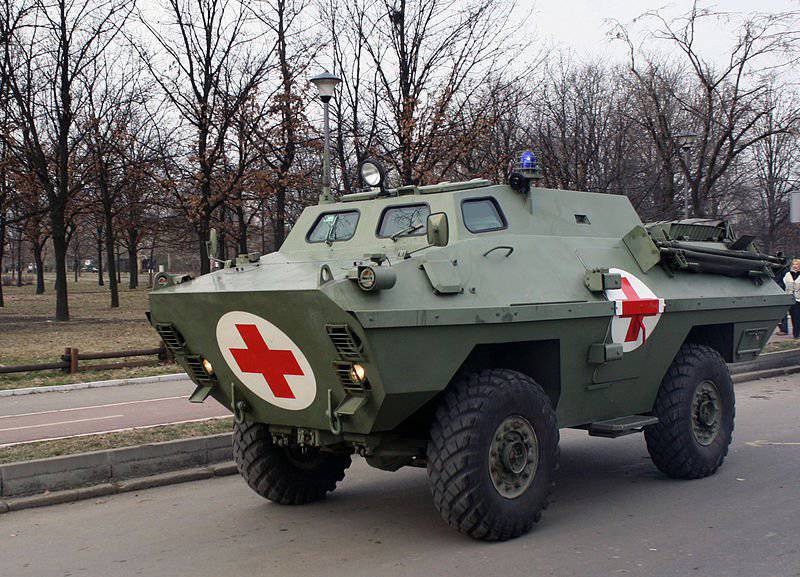 BOV-VP - Military Police armored personnel carrier. Also known as M-86. Armored personnel carrier with a troop compartment for eight people, not including the commander and driver. In the aft part there are two doors for landing. Armament - 12,7 mm machine gun, openly mounted on the roof of the fighting compartment. On the sides there are three launchers of smoke grenades BDK-79. Ammunition - 12 grenades. In the Yugoslav People's Army, BOV-VP was used in the units of the Ministry of Internal Affairs and the military police. 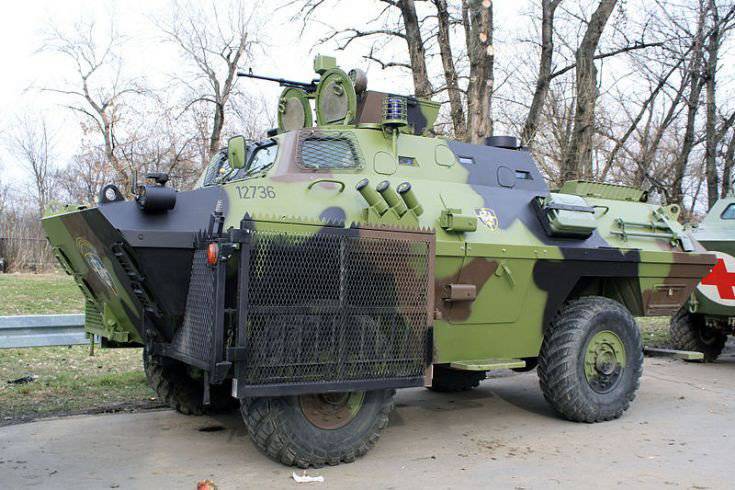 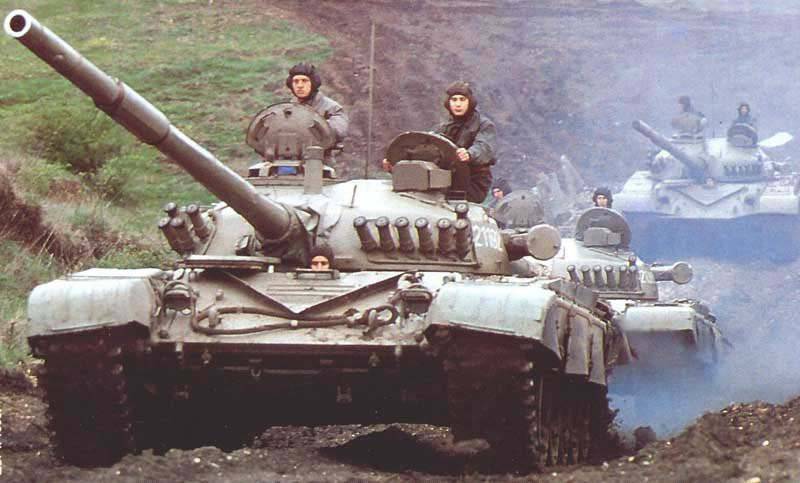 The Yugoslavs liked the tank so much that it was decided to expand their licensed production to replace all other types of tanks. Licensed tank, manufactured with 1983, at the plant them. Djuro Djakovic (Slavonski Brod, Croatia), received the index M-84. According to various data made from 500 to 700 units. The hull, bashnya, chassis, engine, transmission and armament of the tank did not undergo fundamental changes and generally correspond to the T-72. The main differences of the M-84 from the prototype are due to the use of components of its own design. The TPD-2-49 range-finder sight and the TPN-1 gunner night sight were replaced with the DNNS-2 combined gunner rangefinder sight, instead of the TKN-3 commander instrument, the Commander DNKS-2 instrument was installed. In the department of management, a nightless periscopic device of the PPV-2 driver has been installed. A DRHT collective protection system, the SUV-M84 fire control system, and Yugoslav-made communications and internal switching equipment were installed. Engine power brought to 1000 l. with. Thus, the Yugoslav tank M-84 in its characteristics was quite comparable with modern tanks of the third generation (both the western production of the M-1 Abrams, Leopard-2, AMX-40, and the Soviet T-80). 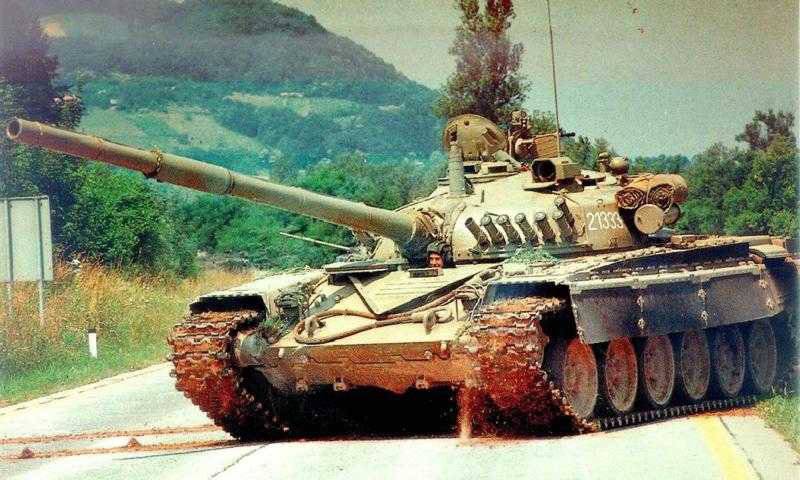 The tank was produced in the following modifications:
-M-84А - basic modification. Adopted by the Yugoslav army in 1984 year. It was equipped with a B-46-6 engine with 780 horsepower.
-M-84А - upgraded М-84 with В-46-6ТК engine with HP 1000 power. Produced from 1988 to 1991 year.
-M-84AB - modernization of the M-84 with the installation of a new SUO-SUV-M-84, is in service with the army of Kuwait.
-M-84AI - BREM, essentially Polish Yugoslavian WTZ-3 built on the M-84A chassis. It was planned to build 15 machines for Kuwait, but there is evidence that they did not have time to build any of them. One prototype was made, which is now being operated in the NE of Serbia.

In the middle of 1989, Kuwait ordered M170AB, 84 BREM and 15 command vehicles 15 tanks, but deliveries were interrupted due to Iraq’s aggression. Around 80 tanks were transported to Saudi Arabia, where they armed several units of the Kuwaiti army. In February, 1991, these tanks took part in the operation "Desert Storm". after the end of the war, the Yugoslavs continued to fulfill the contract, which finally broke with the collapse of Yugoslavia. In all, 149 M-84 tanks were delivered to Kuwait. Currently in service with the army of Kuwait, 78 M-84 remained in the army and about 75 units in storage. 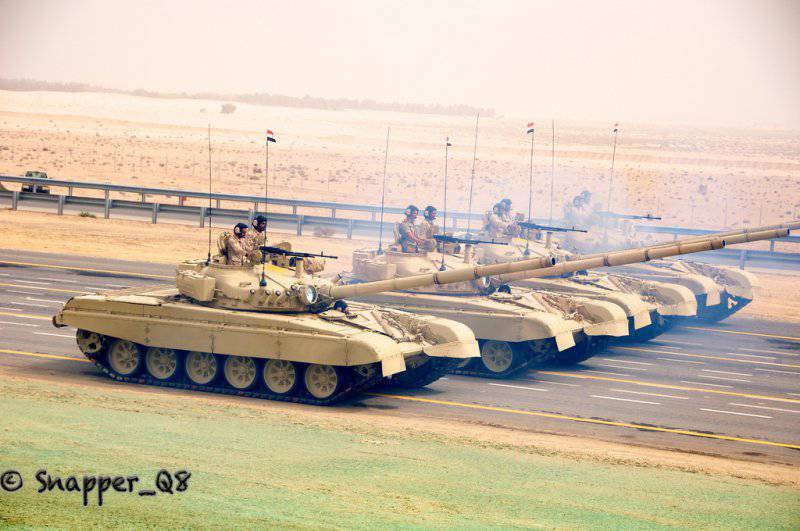 Tanks M-84 on parade in Kuwait

The further development of the M-84 was to become the main battle tank M90 Vihor. The development began in the middle of 80-x, and the designers were set to create a new combat vehicle that could replace the M-84 ... But then Yugoslavia fell apart and only two prototypes remained from the project. However, the Croats used the M90 Vihor to create their M-95 Degman tank, but that’s another история... 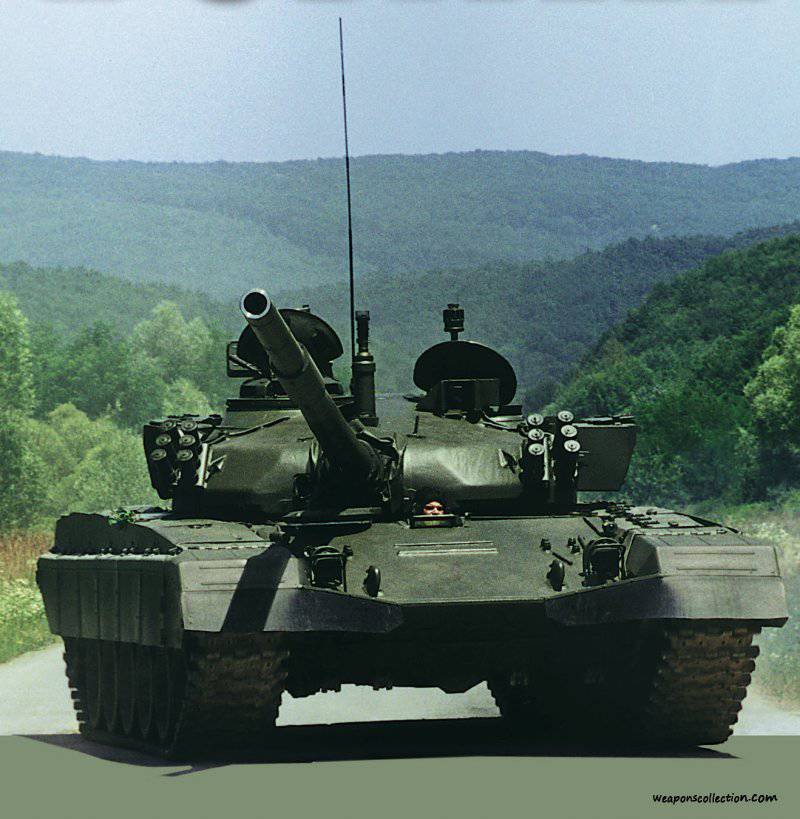 The prototype of the Yugoslav main battle tank M90 Vihor

It is impossible not to recall another interesting Yugoslav car, although it does not belong to armored vehicles — the self-propelled gun NORA-B with an 152-mm gun with an 45 barrel length in caliber. The artillery gun itself was placed on an open moving platform, although later an additional gun shield was installed for it. The FAP 2832 SUV was used as a chassis. The aerodynamic characteristics of the shells made it possible to increase the firing range to 39 km using gas generators, which was considered the highest achievement of the Yugoslav military industry of the 1980-s. 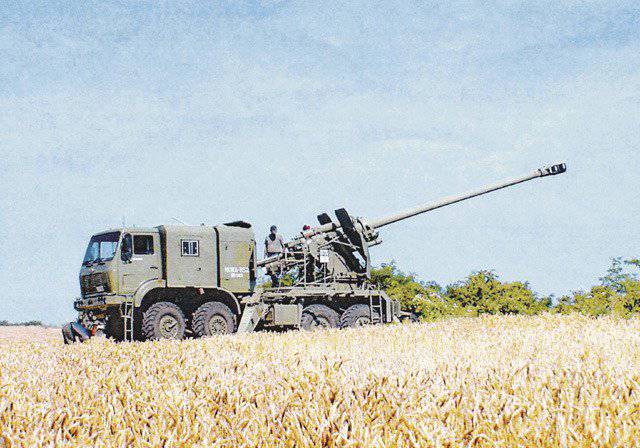