The reasons for the resignation of Prokhorov 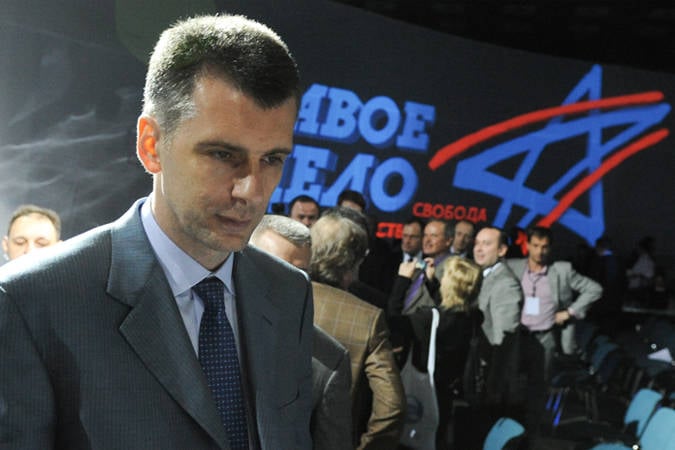 Within the elite, there is a definite understanding that the political spectrum needs more diversity to reflect the hopes and aspirations of the growing middle class and to start dissenting moods through appropriate channels, writes “Russia Watchers”.

This is the essence of “managed democracy”, although it should be said more precisely in order to pay tribute to the direction of this vector - “managed democratization”. This is not about any major changes. The 10% reduction in the number of Duma mandates for United Russia, meaning its small majority in the new parliament, and the emergence of several new votes will already be a powerful signal reflecting the trend of social and political development in the direction of greater pluralism. But the elite disagree on the urgency of these processes. Immediate interests and careers of personal condition and career often take precedence over long-term incentives in the elite’s struggle for survival. The party "United Russia", which has become a real monster of unbridled ambition and greed, is extremely difficult to control, and almost impossible to stop.

In order to have the opportunity to manage this political diversity, Prokhorov was offered to revive the Right Cause party, which until now has been an unsuccessful project and the successor of the Union of Right Forces ousted to the sidelines. Everything seemed to be easy and simple. In Russia, the right wing is often associated with liberalism and Western ideas. But in the case of the Union of Right Forces and Right Business, the most important thing is liberalism put at the service of big business. Being an oligarch, Prokhorov will not be able to give up this image. Therefore, his chances in the election could easily limit 10-15 to a maximum percent.

In addition, the majority of Russians vote for the left or for the center, still feeling frustrated with the right reforms and privatization of the nineties, as well as the resulting conditions for illegal enrichment. Therefore, competition on the right flank will allow United Russia to take even more populist and leftist positions, ensuring the party a dominant position in the medium term. Therefore, today's events, namely the resignation of Prokhorov from the post of party leader, came as a surprise. Looking back, we can distinguish three main reasons here.
First, as the leader of a huge business and financial empire, Prokhorov is not a man who compromises — not inside the party he heads, or in relations with "democratization managers" who have the impression that they "hired" him to implement your new party project. His principle is “do it in my opinion or scram”. Here Prokhorov and rolled.

Secondly, Prokhorov did not confine himself to the traditional electorate from the right flank. He spoke with disgruntled representatives of academia and the working class who are looking for a strong leader who can create career opportunities for them. In other words, he climbed into the garden of "United Russia". In addition, to attract protest votes, Prokhorov used opposition tactics, claiming pressure from regional authorities and Kremlin functionaries to strengthen his image as an independent politician. As a result, “democratization managers” felt that they were losing control over their project. Thirdly, these “managers of democratization” could have special reasons to feel more invincible than usual. The center of these “managers” is the department of the presidential administration’s domestic policy. His work is coordinated by the deputy head of the presidential administration and the main ideologist of Putin’s stability, Vladislav Surkov. While the president is talking about the liberalization of politics, these guys do the dirty work of maintaining "stability", most often based on the principle of business need. I get the impression that the media is greatly exaggerated when it comes to telephone law, censorship in the media and blacklists. And yet, when such things occur, their legs grow from this particular department. More importantly, such “governance of democracy” implies an exceptional influence on the process of making decisions about appointments to political posts. Hence the strong ties between the Surkov team from the Kremlin and the United Russia party. Such a system of political appointments, services, patronage, and personal envy will divert almost anyone from the common goal of moderate political liberalization. Although the president has a modest goal - to “blow off” United Russia for some 10%, the connection of these people with the central party apparatus, with governors and mayors guarantees that they work for the individual interests of the ruling elite, and not the president. The president is too busy with foreign policy and the promotion of his modernization program to figure out what his subordinates are planning. Communication is mainly carried out through Surkov.

Putin’s Russian Popular Front was an attempt to create a parallel structure for political appointments in the United Russia party. Putin must have hoped that he could set up one patronage system against another, while he himself would exercise control over them as the supreme judge. However, after the past "primaries," it became obvious that very few candidates from the front could receive the right to be elected. Shortly thereafter, the parallel front headquarters was closed, claiming that its task was completed. It was a complete failure. Edinorossky colossus won. When a week ago Medvedev appointed the now former head of the internal policy department Oleg Govorun to the post of presidential plenipotentiary in the Central Federal District, the vacant position was taken not by the new Medvedev man, but by the Deputy Govorun Konstantin Kostin, also Surkov’s protégé. Both of them were engaged in public relations in Khodorkovsky's Menatep Bank, and Kostina’s wife was a witness in a case against Nevzlin. Additional evidence of the aforementioned connections is that Kostin was the deputy chairman of the executive committee of United Russia and was responsible for the rebranding of its youth movement.

Apparently, the very next day after Kostin was raised, his administration felt invincible. There was just an ideal moment to make this annoying Prokhorov obey, and if it does not break, then again take power over the "Right cause." The second happened. Many party members were just happy to obey. They convened a parallel conference, which acquired a completely legitimate character thanks to the presence of leaders from the Kremlin and the Ministry of Justice, and elected themselves to key posts. Now all these hardware workers can only try to save the 20 of millions of dollars that Prokhorov allocated for the elections. For the sake of justice, I must say that Prokhorov, with his business style of leadership, has turned many party members against himself. So, everything is as usual, or are these “democracy managers” still overdone?

Of course, in the coming weeks and months, they will try to lower the significance of today's events. Businessman Prokhorov was not born for politics. He missed his chance. Acting on its own, the Just Cause party had no chance. We wanted the best, it turned out as always. Lost nothing but naive dreams.

But still lost something. Lost the opportunity to observe social changes in political diversity: new names on ballot papers, new parties in parliament. The elite need such diversity that there is a valve for discharging a couple of discontent after the elections, when they have to undertake unpopular social reforms. Moreover, the other party project, the party "Fair Russia" of the left-wing sense, is almost stopped. Perhaps the argument was that her death would not have a particular impact on political diversity, since the Right Cause will appear on the right flank of the party spectrum. But now the Kremlin and the country were empty-handed, having only “United Russia”, the communists and the good old Zhirinovsky. Another five years! So the increased discontent and protests in society is guaranteed. Moreover, in the coming years, United Russia will play the role of a lightning rod in the event of any dissatisfaction.

Today has become a complete failure with far-reaching consequences, and Medvedev and Putin should understand this. Prokhorov demanded the audience and the resignation of Surkov. But what can they do? What will they want to do?

The Medvedev firm chirps about meeting with Nazarbayev on the issues of the Customs Union. Apparently, Medvedev decided to signal that he was full of presidential affairs. At the same time, he should understand that today's events can prove the inconsistency and inconclusiveness of his numerous speeches about political freedoms. And not even because of what happened, but to a large extent because of what may not happen now: strengthening of pluralism in parliament, really tangible achievements of his first presidential term, as well as much-needed tools to ensure a second term.

Without the approval of the political elite, without a system of appointments and protection, without these “managers of democracy” and “United Russia” it will be very difficult for Medvedev and Putin to be re-elected. Political stability is sure to end. Medvedev is too cautious, fearing to take bold action. And Putin will not undermine the biggest achievements. He practices judo. There were suggestions that Putin inspired Khodorkovsky with the idea that the oligarch was winning, while he carefully planned his moves. Medvedev may follow the example of his mentor. As was the case with social reforms, an increase in taxes, electricity tariffs and much more, it is quite possible that this issue will also be postponed until the completion of the elections. Making predictions is recklessness. Especially when it comes to Russian politics. What is written below is the prose of life.

By not interfering openly in this conflict, Medvedev will secure a presidential nomination. After the election, he will take advantage of the general disappointment in the electoral process, get rid of Surkov and take control of the presidential administration. Putin will not return to the government. The more liberal premier will be tasked with carrying out unpopular social reform. Putin will use the vacuum left after Surkov to fully control United Russia, including its parliamentary majority, and then use it to smooth out the most acute edges of social reform. It will be six years, the time of new elections will come, and Putin will still be the most popular politician in the country.

We are in Yandex Zen
The world we leave, the world we enter, and the world between them
About Stalin and Khrushchev
4 comments
Information
Dear reader, to leave comments on the publication, you must to register.