The threat of further crushing Serbia 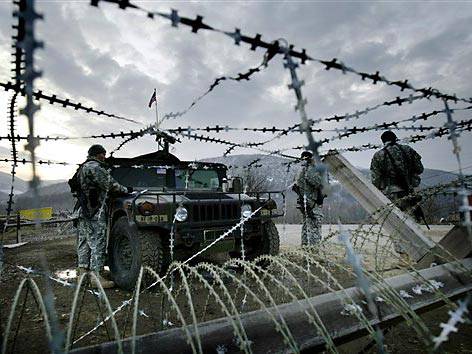 Somehow, in recent years, the situation around Kosovo and Serbia has managed to calm down. NATO bombing of Belgrade remained on the pages stories and in the hearts of Serbian citizens. The epic of the separation of the ancient Serbian lands ended with a partial recognition of Kosovo as an independent state. And what is happening in this long-suffering Balkan land today?


Tension began to increase again after the self-proclaimed Kosovo authorities decided that they already had few existence within the current borders. We need to get our hands on the Serb enclaves, surrounded by Kosovo territory. One of these enclaves today is the city of Mitrovica, the bulk of whose population are Serbs. In addition to Mitrovica, the Kosovo Prime Minister Taci decided that the towns of Brnjak and Jarinje with the checkpoint located in them should go to Kosovo. Naturally, the inhabitants of these Serbian territories do not want to suddenly become citizens of a partially recognized state, but want to remain under the protection of Belgrade. These people can be understood. After what the Albanian Muslims did to the captured Serbs, it is terrible to even imagine the conditions in which several tens of thousands of Serbs who may fall under the “patronage” of Kosovo may find themselves. NATO and the United States urge the Serbs and Kosovars to negotiate, while actively supporting the Kosovo Albanians. This position is genuinely surprising, because it has long become clear that Kosovo is a real European cesspool, on the territory of which mercenaries are recruited into terrorist groups, people are held in captivity, and also undergo illegal operations to seize internal human organs from prisoners. Do NATO and the European Union want to have an uncontrollable state in the south of Europe with a growing territory from which terrorist attacks can be committed against the European Union itself?

This week, the Russian ambassador to Belgrade did not wait for the end of the so-called regional forum for resolving the Serbian-Kosovo problem. Alexander Konuzin left the forum with the words that he does not see people in the hall who would defend the position of the Serbian people. In this situation, the reader may think that there were no Serbs in the hall where the forum was held. However, this is not the case. There were more than enough Serbs in the audience, but none of the officials decided to speak out against the decisions imposed by NATO representatives and the military KFOR. Surprisingly, it turns out that the Serbian authorities, in principle, are themselves ready to “hand over” to the Kosovo side those same enclaves and checkpoints near the border of Serbia. It turns out that the course towards rapprochement with the European Union is so unambiguous that President Boris Tadic decided to simply squander the historical lands of his state in exchange for entering the euro zone. This suggests that the Serbian authorities have long spat on the territorial integrity of their state - the main thing is that Big Brother be satisfied with the officials sitting in Belgrade.

In such a situation, Russia has taken a rather active position in the defense of the Serbian people and continues to not retreat from the intended course. But it should be said that if the Serbs themselves do not have a desire to keep their state united and independent, then no outside help will help. It is the same as if the doctor tried to treat the patient, and he openly, after all the therapeutic procedures, took poison. Here you can ask a question: do we need it, if the Serbian leadership looks like, I’m not afraid of this word, semolina.

The long-standing fraternal relations of the Russian and Serbian peoples are what motivates the attempts of our politicians to save Serbia from further destruction. This can happen in the same scenario as the collapse of the SFRY began at the end of 80's. However, it seemed little to the West that a quilt remained from the whole large country. Theorists of the destruction of Slavic unity decided to develop a new strategy, according to which the real ruins should remain from the Serbian state.

To understand the whole tragedy of the Serbian people, we turn to recent history. A terrible thing, but over the very heart of Europe, as everyone remembers, NATO bombers appeared in 1999 and systematically destroyed Serbian civilians. This operation can be considered a real barbarism. Then a bloody war broke out between the Serbs and Albanians for Kosovo to become an independent state. With the most active support of NATO and the EU, Kosovo was separated from Belgrade with missiles and shells and appointed its government. This government was headed by the former militant Hashim Taci, who himself killed civilians of Serbian villages, massacred the Orthodox clergy and blew up Serbian monasteries, many of which were more than 500 years old. Serbia has not experienced such humiliation since the days of the Ottoman yoke.

And it turns out that the spilled Serbian blood is not very important for the current Serbian authorities. With such a desire, they "pull" the Serbian people into the European Union, whose unity is already breathing its last incense, that they are ready to throw whole cities upon the Albanian tearing to pieces ...

Let us hope that the demarche of the Russian diplomat will have a sobering effect on Boris Tadić, and this politician will soon change his attitude towards the opinion of Russia and abandoned Serbian citizens surrounded by Kosovo and NATO troops. Dance under the NATO tune can lead to the continuation of the crushing of Serbia and beyond.

We are in Yandex Zen
Armored vehicles of Yugoslavia. Part of 6. Wars in the ruins. Bosnia and Herzegovina. Kosovo. Macedonia
Activization of extremists in the Balkans: Kosovo alone is not enough
28 comments
Information
Dear reader, to leave comments on the publication, you must to register.