The army demands to remove Serdyukov! September 18 - All-Russian action and the adoption of an appeal to the President. 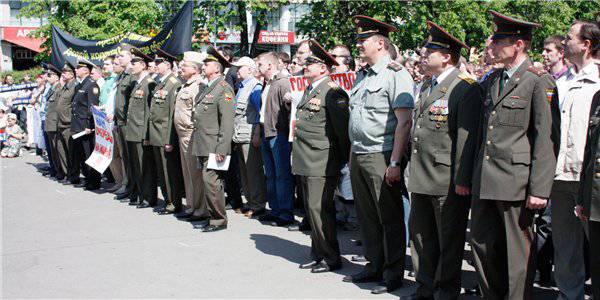 
September 18 starts All-Russian action "Army against Serdyukov." In Moscow, the rally will begin in 13-00 on Pushkin Square, also promise to support us in Murmansk, Severodvinsk, Samara, Stavropol, Arkhangelsk and other cities of the country.

We tolerated for a long time, listened to the promises of the Ministry of Defense, wrote unanswered letters, deputy requests, but we were not heard. Many of the officers whose rights we defend served in the Soviet army, many are waiting for their housing according to the law for 10-20 years, some of them have no housing at all, for many years they live with families where they spend their nights at work. Meanwhile, the Minister of Defense, as if nothing had happened, reports to the President that the process of providing soldiers with apartments is in full swing, and by the end of 2012-year it will be completed.

This can no longer continue! Three and a half months have passed since the Public Council for the Protection of the Rights of Servicemen held its first action. For three months we heard one thing: "Wait! Everything will be!" But we understand that we have to wait exactly before the elections. Wait to make sure once again that there will be nothing! And we will not wait!

Once again I ask all those who are not indifferent to the fate of our army to inform as many people as possible about the action and by all means come themselves. We need to show that we are not a handful of disgruntled grumblers, but a real civil society to be reckoned with!

At the rally, we will make an appeal to the President. Below I publish its text. I ask everyone who is with us to extend this appeal as much as possible, and also to sign in his support! Signatures (name, profession or social status, region) leave in the comments to this post, moderators will gradually add you to the list.

Those who are not indifferent to the further fate of the country's army appeal to you! Today, we all understand that our army is in a critical condition, and how soon it will come out of it and whether it will come out at all, our future directly depends. Our meeting is a reaction of the army to the inability of the Minister of Defense and his team to cope with their duties. We are convinced that the continued presence of Mr. A. Serdyukov at such a responsible post is not only inexpedient, but also extremely dangerous.

We have to admit that the large-scale reform that began in the Ministry of Defense of the Russian Federation, in accordance with the “Strategy for the social development of the Armed Forces of the Russian Federation for the period up to 2020”, is in a deadlock. None of the goals of military reform: to improve the quality of social development of the Armed Forces to the level of the five best armies in the world, to strengthen the country's defense capability, to make military service prestigious - not achieved.

Recently, a huge amount of housing for retired military personnel in various regions of the Russian Federation has really been built. But, alas, only a small percentage of apartments out of these tens of thousands are actually inhabited, and not “on paper”. The main reason for this is corruption and bureaucracy! Officials of the Ministry of Defense cannot agree among themselves; there is no interaction at the proper level with local administrations - they have been idle for years at home. Serious problems are also the absence of a legal queue for the provision of housing, the imperfection of the legal framework governing housing legal relations in the Defense Ministry of the Russian Federation. The housing system for military personnel created over many years was destroyed, and the initially corrupt and extremely incompetent structures — the Department of Housing Services and the Department of Property Relations of the Ministry of Defense of the Russian Federation — were established.

Serious problems and our defense industry. The defensive order is not carried out from year to year. This is recognized by the leadership of the country. But not military officials are blamed for this, but scientists and designers. Military science is at an impasse - not enough money for it. We do not have modern weaponsand we still hope that we are a great nuclear power. Meanwhile, the level of our defenses has plummeted. Military retirees, many of whom are veterans of military service, are in distress. Since January 1, 2012 for servicemen of the Armed Forces of the Russian Federation is planned in connection with the adoption of the Federal Law “On the remuneration of servicemen and providing them with separate payments”, to introduce a reduction factor for the pension accrual base in the amount of 0,54 (54% of the salary for the military and special positions , salary for military and special rank and percentage premium for long service) and keep the existing procedure for determining the amount of pension, but from a reduced base of pension accrual - 50% for 20 years of service and 3% for each year of service 20 years, but not more than 85%.

These bills show a discriminatory approach to military retirees and persons equated to them. We believe that when discussing the aforementioned bills, the deputies should have made an amendment, according to which, when retiring military servicemen, war invalids and other categories of people affected for public interests, pension payments are not 54, but 100% of the assigned pension.

We see that a radical restructuring of the organizational system of the Armed Forces of the Russian Federation, a dramatic reduction in the number of personnel of the army and fleet, parts and compounds are carried out without scientific justification and serious expert evaluation. As a result, hundreds of thousands of officers, warrant officers and midshipmen and members of their families are subjected to social repression, deprived of the opportunity to continue their service and thrown out into the streets, replenishing millions of unemployed and destitute.

The economic base of defense has been practically destroyed, the mobilization system and defense management structures of the country are missing, the defense industry complex has lost its systemic ability to provide the army with modern weapons and military equipment, and the spiritual and moral basis of the military profession has been undermined. In the long run, this may lead to a decrease in combat effectiveness below a critical level and even to the threat of losing Russia's sovereignty.

Comrade Supreme Commander! Based on the foregoing, we, the military personnel, citizens discharged from military service to the reserve, family members, civilian personnel of the Ministry of Defense of the Russian Federation, demand:

1) Immediate resignation of the current Minister of Defense of the Russian Federation, Anatoly Serdyukov and his team, in connection with a complete official inconsistency, as well as bringing him to criminal liability for damage caused to the state.
2) Adopt the law “On Parliamentary Control” and “On the Security Council”, in which to define the criteria for the formation of this Council, and to prescribe the responsibility of the Minister of Defense of the Russian Federation for his decisions.
3) In the shortest possible time to eliminate gross violations of housing legislation in the field of housing. This applies to the provision of official living space to persons serving in the military service under the contract, as well as providing living quarters for permanent residence to those who are subject to dismissal or have already been discharged or retired and have the right to permanent housing.
4) Repeal the amendment to the Law “On the Status of Military Personnel” article 15.1, introduced by the Federal Law No. 342-ФЗ from 08.12.2010, concerning changes in the norm of the total living space as violating the requirements of the Constitution and the rights of citizens of the Russian Federation.
5) to the General Prosecutor's Office of the Russian Federation and the Accounting Chamber of the Russian Federation to conduct a thorough check on how budget funds were spent for the construction (purchase) of housing for military personnel, how many apartments were built (purchased), how it was paid and at what price for the entire reporting period, including the “15 + 15.
6) Stop the collapse of the defense industry, military education and military science.
7) Revise the draft law “On the monetary allowance of military personnel and the provision of separate payments to them” and make changes in the coefficient for the pension accrual base, which do not infringe the rights of military retirees and persons equal to them.
8) Determine the shortest time to restore the construction work of paid co-investors' apartments through the Ministry of Defense of the Russian Federation, and also consider the issue of providing them with alternative housing.

We are in Yandex Zen
5-I operational. Interview of Admiral Retired Selivanova Valentin Egorovich
Interview of V. Putin to Channel One and the Associated Press Agency
144 comments
Information
Dear reader, to leave comments on the publication, you must to register.