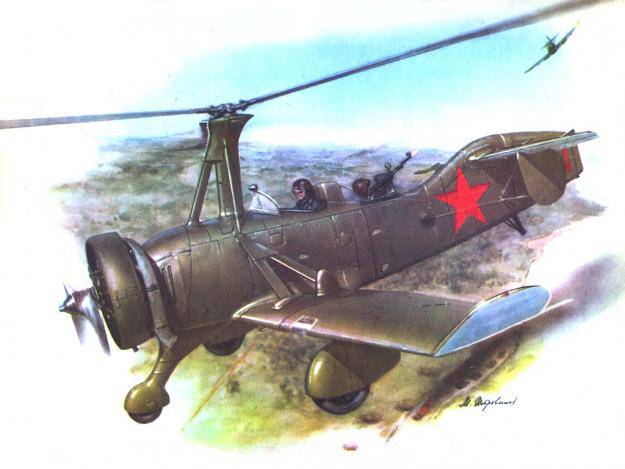 It all started with the fact that at the beginning of 1938 g during the evacuation from the drifting ice in the Greenland group of I. D. Papanin, the Yermak icebreaker was actively used first for searching and then for evacuation of the autogyro A-7.

The use of the autogyro was not overlooked by top management, although the military still strongly doubted the combat effectiveness of autogyros, the successful use of Papanintsev in rescuing and the incoming information about the active development of autogyros abroad C-30 Mk II by engineer Sierv, Weir W-3 and autogyro Austrian designer R. Hafner, as well as adopting a licensed mod for the French Air Force. C-30 called LeO C-30.
It was decided to release a small series of autogyros A-7bis of 20 units by the fall of 39 and conduct troop tests. 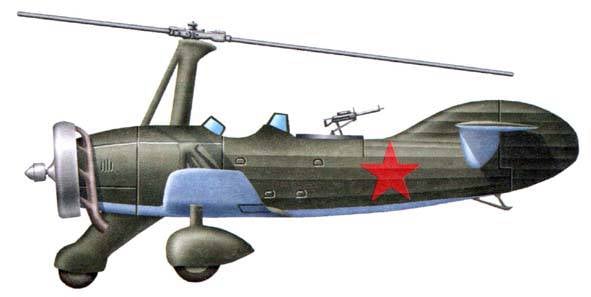 The negative attitude of the leadership of the Air Force, who do not see the great advantages of the gyroplane over traditional aircraft, put an end to the further mass production of autogyros.
The ongoing conflict with Finland made me take a different look at the capabilities of rotorcraft. Difficult weather conditions low cloud cover strong gusty wind; the absence of large landing sites greatly limited the use of traditional aviation.

High resistance to gusts of wind ability to take off from the patch, as well as a high level of training for pilots who flew in conditions of low clouds literally touching the tops of the pines, A-7bis became a salvation for many of our wounded soldiers.
Autogyros were used as artillery spotters, short-range bombers taking 4 cells, attacking ground attack guns from machine guns and PCs, capable of landing vertically and if the wind blows, Sanitary two suspension containers under the wing are sanitary.
An air combat with the Foker D-XXI fighter, in which the pilot V.M. Vorontsov (a former fighter pilot) was warned by an observer at the time, was recorded using the high horizontal maneuverability of the A-7 autogyro, met the enemy's aircraft on a collision course and damaged it from the PV-1 synchronous machine gun . 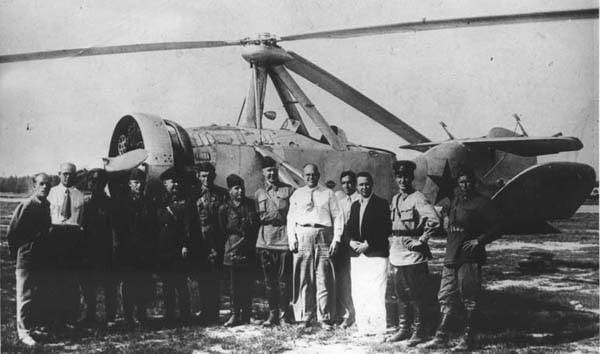 In the spring of 40, the first in the USSR plant of rotary-wing vehicles was created at the Ukhtomskaya station. Kamov was appointed director and chief designer, and M. L. Miles became his deputy. In the middle of 1940, the plant began building five modernized AY7bis gyroplanes. Pilot Kosice began their tests.
In mid-March, the 40 of the year produced a demonstration of the auto-torch A-7bis to the country's leadership, headed by JV Stalin.
It turned out to persuade a demonstration flight and landing on the territory of the Moscow Kremlin. Pilot Koshits at minimum speed 60 km.ch. flew over the territory of the Kremlin effectively turned almost around the bell tower of Ivan the Great and made a parachuting landing on Ivanovskaya Square opposite the military school named. The All-Russian Central Executive Committee also took off after a short run.
Demonstration flight made a good impression on Stalin.

The State Defense Committee made a decision prior to the commissioning of the Ukhtomsky plant of creating an autogyro production site at aircraft plant No. XXUMX (Moscow).
On which began to produce autogyro A-7bis and training autogyro A-7UTI with dual control. 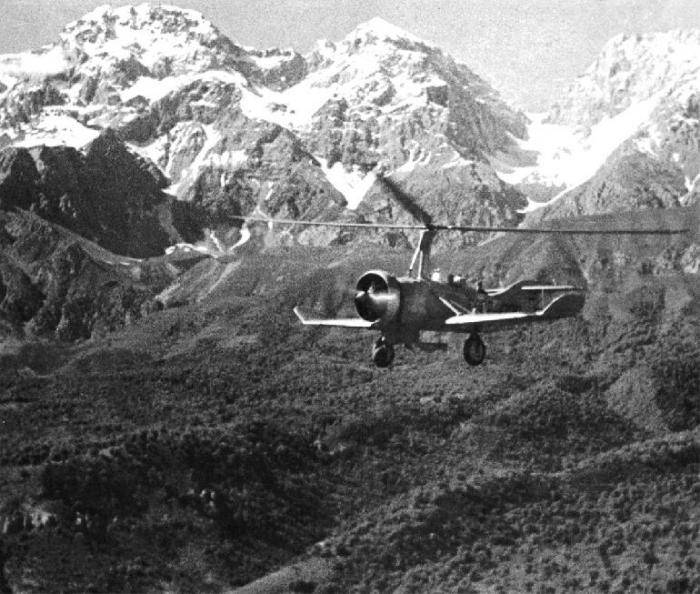 In the spring of 40, Kamov began the development of the modernized A-7 autogyro. On which they installed the aircraft engine M-25B, automatic skew, pitch control HB.
According to the Finnish experience, they increased their armament and defense; installed 2 synchronous ShKAS and one turret ShKAS, designed fuel tank, pilot's armor.
High engine power allowed to increase the speed to 250 km.ch. (no longer allowed the aerodynamic resistance and durability of the blades HB), increased load capacity and rate of climb,
Combat load - vertical (hopping) takeoff 600 kg: 4-e FAB-100 2-e FAB-500, 8 PO-132 (or PO-82). 2-e suspension cassette G-61 (transport container) Grokhovsky in which it was possible to transport up to 8-and people, 4-e in each.
Combat load (takeoff on an aircraft) - kg 1000:
The crash of the experienced A-7M showed no inconvenience and the reliability of the swashplate was forced to abandon it.
In November, the 40-A-7M passed the full test cycle and was put into service.
The newly formed fur. corps according to the staffing provided for, the presence of a separate squadron of autogyros. 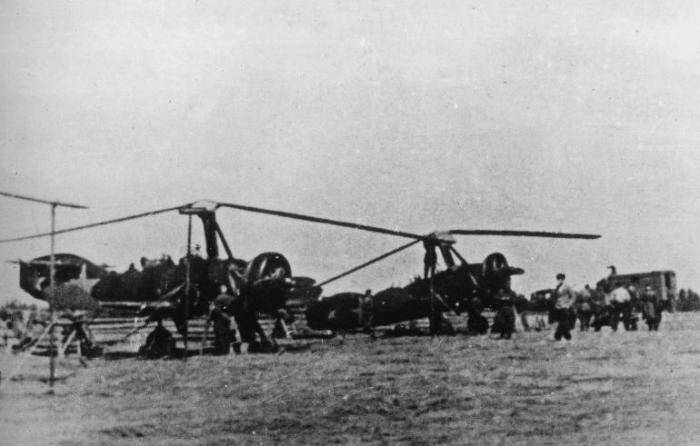 We are in Yandex Zen
Combat autogyro N.I. Kamov
LeO-45. A lucky plane, which was not lucky
Add a comment
Information
Dear reader, to leave comments on the publication, you must to register.