A space corporation is being created in Russia

February 11 2015
18
A new state-owned corporation is being created in the Russian Federation, to which the task of bringing Russian cosmonautics out of the crisis will fall. The eighth Russian state corporation will be formed on the basis of the United Rocket and Space Corporation (ORKK) and the Federal Space Agency. They will be merged into a single state corporation "Roscosmos". This proposal of the Russian government has already been supported by Russian President Vladimir Putin.

State corporations differ from existing in our country with the predominant state participation and federal state unitary enterprises (FSUEs) in that they are not subject to information disclosure provisions, and state corporations are removed from the control of a number of state bodies in terms of requesting information, conducting inspections control of spending. In addition, these corporations, unless otherwise specified, are not subject to the provisions of laws on public procurement and bankruptcy. State corporations provide reports on their activities only to the government of the Russian Federation. In most cases, their leaders are appointed by the president of the country. 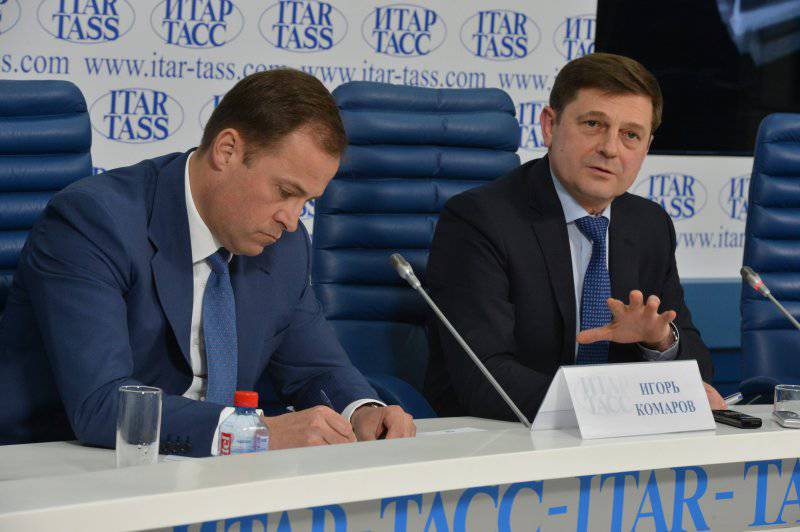 At the same time, Roskosmos has already been assigned the task of leading Russia into the leaders of space exploration. The new program of the corporation will contain items relating to the work of the Russian teams onboard the ISS, as well as the development of high-tech manned vehicles. This was stated by Igor Komarov, appointed to the post of head of the new state corporation "Roskosmos". According to him, one of the priorities will be the restoration of leadership in space exploration, the desire to achieve superiority in this area over the geopolitical opponents of the Russian Federation.

At the same time, Igor Komarov noted that the new state corporation will not have a ministry structure. “What will be - will be something new, as ORKK was engaged only in the management of industry. We do not want to create a ministerial structure, rather something mobile with the possibility of the transfer of authority, ”said Igor Komarov. According to him, in addition to industry in the rocket and space industry of Russia, there are also research institutes and related infrastructure, and part of the tasks will be transferred to them. Igor Komarov noted that the idea of ​​creating a new state corporation arose quite a long time ago, and this decision was discussed several times. The decision to create a new state-owned corporation was also connected by its new head with turbulence in the country's economic situation, sanctions and a general foreign policy situation.

According to Igor Komarov, the process of legal registration of Roscosmos GC will be completed within 6 months. Speaking about the creation of a new state-owned corporation, Komarov expressed confidence that this could be done during the first half of 2015 of the year, by July 1. He assured that by this period all necessary measures should take place, including the approval of the law and all the preparatory measures for the creation and registration of Roscosmos State Corporation.

Also in the coming weeks, Roskosmos will have to decide on the exact timing of the transfer of all facilities of the Vostochny space center under construction. According to the leadership of Roskosmos, the construction time of the cosmodrome in the Far East is in the final stage, there is no possibility to transfer something. At the same time, Komarov sees certain problems in construction, but he expects, in close cooperation with Spetsstroy of Russia, to have time to achieve the construction readiness of all the cosmodrome facilities necessary for the first launch, which should take place at the end of 2015 of the year. Komarov acknowledged that this task is not easy. 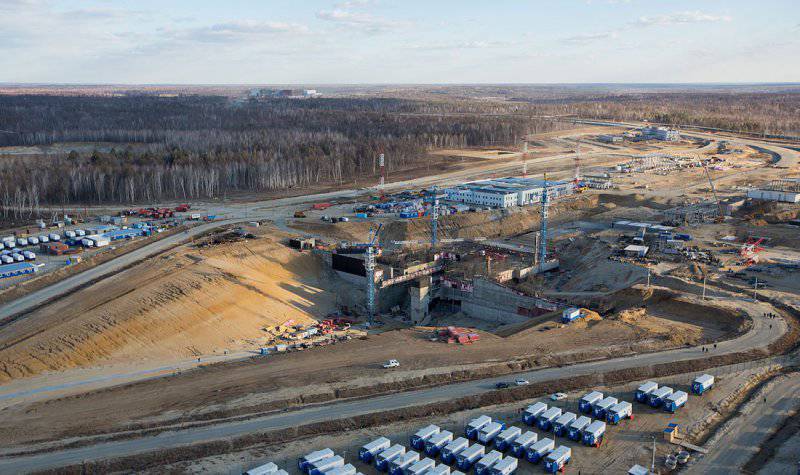 The spaceport in the Amur region must pass before 30 November 2015 year. At the same time, the builders had repeatedly stated their lagging behind the schedule at certain facilities of the Vostochny cosmodrome. Another unpleasant surprise was the overstatement of the cost of the cosmodrome. Auditors of the Accounts Chamber of the Russian Federation found that the cost of estimated standards used in construction in Russia today leads to an increase in the cost of individual facilities being built on 20 — 45%. In particular, with the construction of the Vostochny cosmodrome, the estimated construction cost increased by 13 billion rubles, or by 20% of the initial cost, is indicated in the published report of the Accounts Chamber. Dealing with this difficult asset will have a newly created state corporation and its head.

In turn, Russian Deputy Prime Minister Dmitry Rogozin, who oversees the defense industry, said what the new state corporation will do. “We set tasks for Roskosmos 3. The first task is the creation of an efficiently operating high-tech industry, which would be based on advanced science. The second is to extract the maximum benefit for our entire state. The third is the restoration of the leadership of the Russian Federation in space activity. ” In addition, Rogozin announced that by 2025, the labor productivity in the Russian space industry should triple, and wages should double. Dmitry Rogozin also stressed that in the next few months it was entrusted with the new structure to submit a draft of the Federal Space Program, which would clarify the future of the ISS and manned cosmonautics as a whole.

It is worth noting that the reform of the space industry in our country began in the year 2013. As a result of this reform, the United Rocket and Space Corporation was created, which, in fact, did not exist in its original form even for two years. Skeptics, having learned about the next reorganization with the union, have already remembered one famous Krylov's fable. 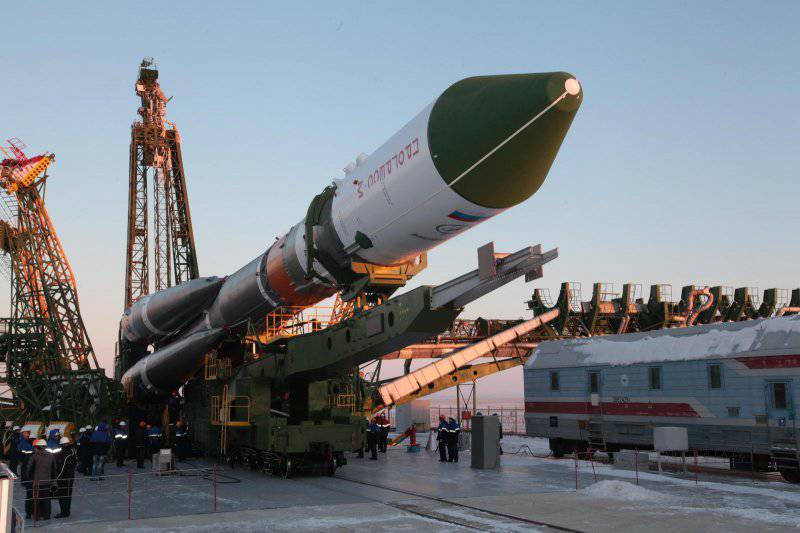 Despite the inheritance of the old name, the new Russian state-owned corporation Roskosmos will actually be built on the basis of the ORCC, and not the eponymous agency. According to Expert magazine, the backbone of the new state corporation will be composed of industry representatives. They will be able to join the space agency staff, but not all of them. According to Komarov, the staffing level of the new state corporation will be less than the total staff merged together by the space control committee and Roskosmos. In this case, the main layoffs affected exactly the agency. For example, a large-scale reduction is expected in the MCC: from 800 employees, it is planned to reduce 200 people. In this case, layoffs will be held in stages until April 2015, mainly they will affect pensioners.

The clouds over the space agency began to thicken in 2013, when in Kazakhstan at the Baikonur cosmodrome there was a resonant accident with the Proton-M launch vehicle. She caused a very loud scandal in the entire industry and even abroad. The interdepartmental commission, which investigated the causes of the catastrophe, concluded that the primary source of the problem that led to the fall of the rocket was “lack of production discipline”, as well as a superficial attitude to their duties on the part of Roscosmos officials and criminal negligence. ”

At a meeting of the commission, which was held on 5 on August 2013, Dmitry Rogozin formulated the existing claims to the Russian space agency: “First of all, poor management. Secondly, the presence of excess capacity. Thirdly, a muddy understanding of the objectives of space activities. ” At the same time, it was reported that one of the possible ways out of the crisis that has arisen, which is developing in the Russian space industry, could be the consolidation of the industry. 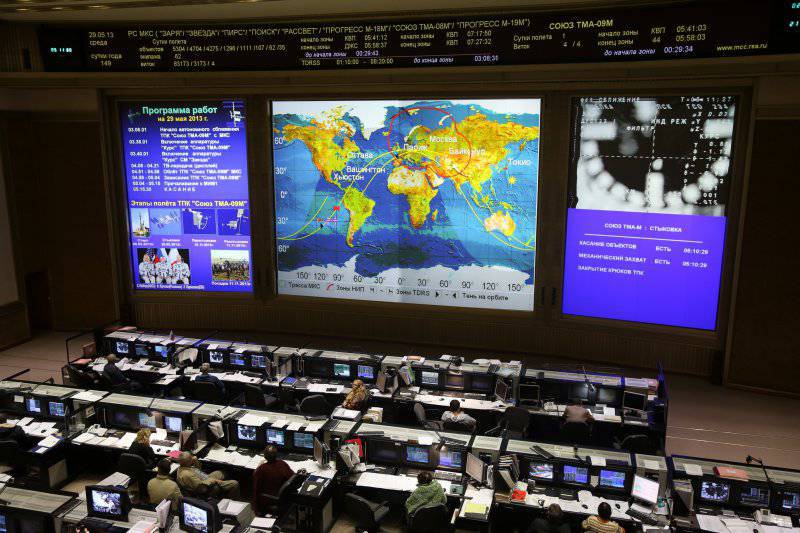 The crisis in the space industry

What is the crisis that is observed in the Russian space industry? At the end of 2014, the expert council of the Military Industrial Commission began to study the real situation in the industry. The result was disappointing conclusions that the Russian space program was faced with systemic problems. In essence, the experts noted the same thing that Dmitry Rogozin said earlier: there is a "muddy understanding of the goals of space activity." There is a crisis in setting goals, it is not clear what exactly Russia wants to achieve and what it will need.

Roscosmos did not actually have a clear and clear strategy for the development of the national space program. The existing programs do not represent a holistic strategy, but rather a poorly coordinated collection of proposals by enterprises in the industry, in which neighboring chapters may even contradict each other, experts of the military-industrial complex noted. The presented space programs attempted to cover everything at once: the construction of heavy launch vehicles, the development of orbital stations, the circling of the moon and the construction of the lunar base. At the same time, a clear understanding of the prospects of these programs was not presented, and, more importantly, the timing and mechanisms of impact from them. All the submitted projects are very expensive and are focused only on funding from the state, and the Russian budget does not count on such spending and is not ready for them.

The latter is very important. As among the identified problems in the industry and strategic planning in the space sphere, experts of the military-industrial complex note that departmental and sectoral tasks were set outside the context of national priorities and problems. In its conclusion, the expert council of the military-industrial complex pointed out insufficient attention to the initiatives of private business and the development of public-private partnerships, as well as the lack of work to achieve consensus in society regarding the future of Russian cosmonautics. 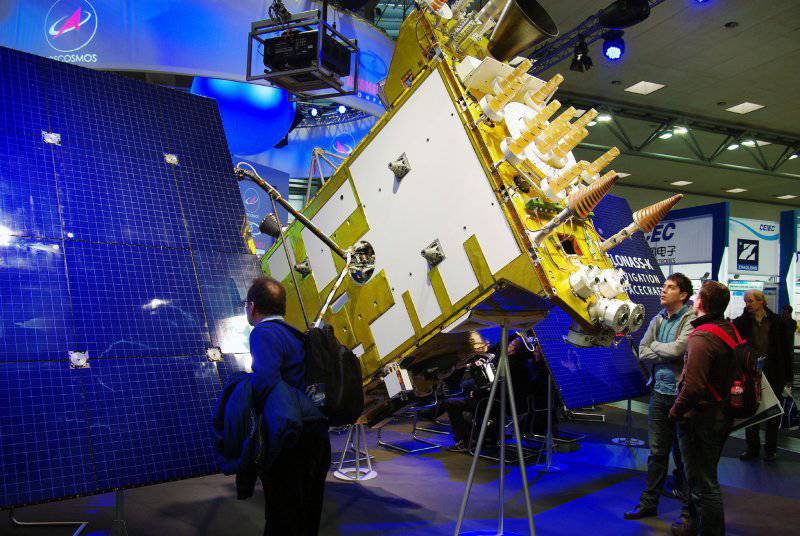 Interestingly, similar problems were faced in their time in the USA, especially in manned space programs. Americans had to solve exactly the same problems as we do today. This is the lack of a national consensus on the long-term goals of space exploration after completing flights to the Moon, and the orientation of the American space industry to resources from the state budget of the country, and the mismatch of the nomenclature and the amount of the planned space programs to the real possibilities of the country's budget. Surprisingly, even the problem of attracting new personnel to the space industry in the United States is as acute as in Russia.

The United States was able to respond to the emerging challenge by reviewing its space program. Back in the beginning of 2010, Barack Obama decided to abandon the implementation of the “Constellation” program (the development of manned cosmonautics for flights to the moon, and in the long term, and Mars). Instead, it was decided to encourage private American companies to create spacecraft to deliver astronauts onboard the ISS. And instead of “returning to the moon,” the idea of ​​flying to one of the asteroids appeared.

At one time, American parliamentarians also attacked NASA with criticism for the vagueness and vagueness of the wording of the goals, as well as for the huge, but not reasonable appetites for funding. The result was the creation of an ad hoc temporary committee composed of 12 experts, who conducted a comprehensive analysis of the strategic direction of the US space agency and prepared the report “Strategic Direction of NASA and the Need for National Consensus”.

Russia, like the United States, today needs clear, achievable and coordinated goals in space that could ensure the emergence of new talented personnel and the inflow of investments. It is the development of such goals, which could be realized in real reasonable terms and which would receive the support of the country's leadership, the professional community and the public, that the Roscosmos state corporation should take on. Whether the new state corporation headed by Igor Komarov will cope with this challenge, or will it all end with reforming for the sake of reforming, as has happened before, the near future will show.

Ctrl Enter
Noticed oshЫbku Highlight text and press. Ctrl + Enter
We are
Roscosmos is preparing for convergence with air defense systemsIndustry is being pushed off Roscosmos
Military Reviewin Yandex News
Military Reviewin Google News
18 comments
Information
Dear reader, to leave comments on the publication, you must sign in.