Is the United States of Europe a fiction? 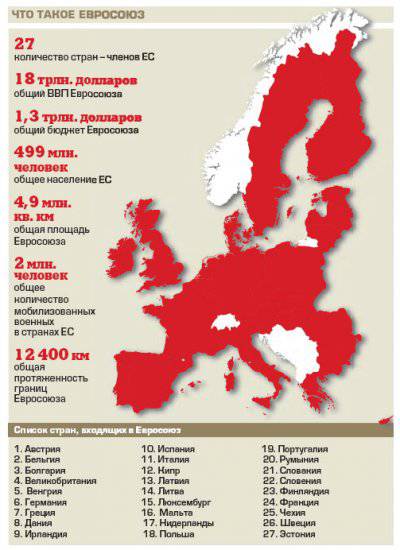 The global financial crisis and the flourishing color of the blooming “Arab springs” increasingly force humanity to think that it is time to somehow change its approach to the further development of the economy and politics. It is quite obvious that the United States is no longer coping with the role of the world leader, and more and more often it appears in the form of a Colossus with feet of clay, which is about to crumble from a small external (or internal) impact. World geopolitics today takes if not perverted forms, then they are already close to them. This is expressed in numerous conflicts of the Islamic and Christian worlds, in the growing struggle of internal contradictions, not even in individual countries, but in entire civilizational segments. The Western world gives birth to Breivik, Muslim states cannot decide in which direction they should go further - whether they take the path of Islamic radicalism or create secular states. By the way, there are less and less secular Islamic states in the world. After the victory of the opposition in Egypt and Libya, it is possible to create states that support the course of Islamization and the introduction of Sharia law.


A kind of Islamic revanchism has already begun its journey through Europe. According to statistics, more than 1,5 of millions of Muslims live in London today, many of whom no longer want their opinions to be ignored. That is why we are increasingly witnessing numerous marches "for the freedom of Muslims" in Europe. In Switzerland, minarets are already growing, women in hijabs are walking around Sweden, and refugees from Libya, dissatisfied with their situation, overturn police cars and demand that they receive a residence permit and unemployment benefits. Multicultural policies that have been preached for several decades lead Europe, in fact, into a real ethno-confessional impasse.

At the same time, there is growing discontent among indigenous Europeans. So in Germany on construction sites, in industry and energy, the number of visitors from Turkey has long exceeded the number of local residents. The situation is aggravated by the fact that the Turks simply dump the labor market in Germany. In other words, Turkish citizens agree to do work for 50 euros where German does not agree for 200. A similar situation, by the way, in our country. Therefore, the problem of guest workers also has a very negative impact on the relationship between people. On the one hand, migrant workers saturate the labor market with labor in those areas that are considered unpopular with local residents, on the other hand, an increase in their number causes serious concerns among the public. Many even express the view that it is simply profitable for the private business to use cheap labor, and the government indulges in all this. There are fears that the labor market in Europe will soon simply collapse on its side, and it will outweigh the board with low-skilled workers engaged in labor activities, in fact, for pennies.

In this regard, even now, problems with the redistribution of jobs significantly hit the national budgets of European countries. It is this fact that served to ensure that some European politicians began to express thoughts about the creation of a supranational European body. This body can be called a real European Parliament, which will really make decisions that are important for the whole of united Europe. The creation of such a body is expressed, for example, by the ex-Chancellor of Germany Gerhard Schröder. According to him, Europe now needs a rejection of national authorities and serious centralization. In fact, his words can be interpreted as a call for the creation of the United States of Europe.

Schröder’s idea cannot be called absolutely new, because the European Union itself was considered at the initial stage of its creation as a truly unified state. But, according to many financial and political analysts, the USE is nothing more than utopia. For such a point of view there is an explanation. Do the same Great Britain or France want to live in the same borders with each other, having lost, in fact, their national identity. This is - time. And will the citizens of Germany add enthusiasm to the fact that they will not be ruled by their own Bundestag with any but homegrown deputies, but a “hodgepodge” of Latvians, Poles, Danes and other people competent in the German economy and politics ... These are two . And, for example, will the Dutch want to support the Greek economy, which is breathing its last, if it suddenly becomes part of a truly great European economy. If now you can somehow disown these "negligent" Greeks, then being with them in one state such a number will not pass.

So it turns out that the idea of ​​the European United States is really unviable. Snoring themselves from the inside, and even under the active influence of external Islamization, this formation will simply fall apart like a built house of cards with heavy efforts.

Of course, many European "dwarfs" sleep and see that they were taken under the same roof, but the Great European powers are unlikely to take such a step.

And what to expect in this situation in Russia? For us, there are two ways: the first is the one we are following now, the path of the raw materials appendage of developing and already developed countries, and the second is the way to strengthen our role in the world. With our potentials, the second option is quite possible, but for this you need to recall your cultural roots, age-old traditions and stop indulging in your own laziness.

We are in Yandex Zen
Genocide of Christians in the Middle East. Millions of people have become a bargaining chip for American geopolitics
Results of the week. "This is not for you ..."
13 comments
Information
Dear reader, to leave comments on the publication, you must to register.