Israel evacuated the embassy in Jordan. On the construction of the Sunni block 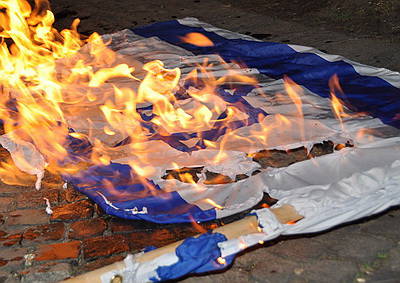 
Initially, Jerusalem planned to send its people from Amman home only on weekends, leaving at the embassy one diplomatic representative and security. However, on September 14, after the appearance of rumors of unrest on Friday and weekend, the Israeli Foreign Ministry decided to early evacuate the diplomatic mission from the Hashemite Kingdom of Jordan.

A call for mass actions of anti-Israeli character at the Israeli embassy in the capital of Jordan appeared on the social network Facebook. In Jerusalem, the Jordanian security services will disperse the demonstrators, and the “second Cairo” will not, but they did not forget to insure themselves against the negative scenario.

The reason for the protest was the next "drain" WikiLeaks. The site published a “confidential diplomatic correspondence”, in which there is information that the United States plans to deploy hundreds of thousands of Palestinian refugees in Jordan. Recall that Palestinian Arabs already make up half (or even more than half) of the state’s 6 million. Palestinians fled here during and after the Arab-Israeli wars 1948 and 1967 from the Arab lands that occupied Israel, and also lived on the territory of Trans Jordan (Hashemite kingdom) and before the partition of Mandatory Palestine.

It should be noted that at the present time the issue of granting Palestine a state status causes great attention. Moreover, if the Arab world, and a large part of the world community, support this step, Jerusalem and Washington are strongly opposed to this.

In such a situation, Jerusalem is not averse to thwart even the very discussion of this acute problem. Suffice it to recall the latest August aggravation on the border with the Gaza Strip, in which the Israeli authorities accused the Palestinian radicals. Although, Palestinian radical organizations before these events offered their members to refrain from attacks against the Jewish state so that they would not be used to disrupt the consideration of the Palestinian application.

Nevertheless, a series of terrorist acts took place in the perfectly protected territory of Israel, when inexplicably arising in the rear of the Jewish state, the terrorists made several successful attacks. Jerusalem, without providing any evidence to the terrorist attacks, immediately blamed the Palestinian movements, and Gaza was inflicted aviation blows. The Israeli leadership tried to use these events as evidence that Palestine, with its terrorist essence, has nothing to do among the recognized countries of the planet. But, these events were not enough to disrupt or postpone the upcoming consideration by the UN General Assembly of the Palestinian issue.

Now the opponents of the creation of Palestine headed for driving a wedge between the Arabs themselves. This is helped by the fact that the Palestinian "brothers" in the Arab world are only in words treated favorably as the most severely affected by the aggression of the Jews. In reality, the Palestinian Arabs are treated as poor relatives, beggars, who also think that all other Arab countries owe them something. In the worst case, Palestinians are viewed as violators of peace, their mere presence on the territory of another Arab state is a strong destabilizing factor.

So, the same Jordan because of the Palestinians e almost plunged into bloody chaos, like Lebanon, where exactly the Palestinian radicals played an important role in unleashing a civil war. At the end of the 1960-1970-ies, Palestinian Arabs wanted to create a “state within a state” in the Arab countries that accepted them, which eventually led to bloody civil wars. Jordanian law enforcement forces managed to finally cope with the Palestinian problem and expel their gangs from their territory only by the middle of 1971. The events of “Black September” 1970 of the year in Jordan are well remembered.

Information on the WikiLeaks website has led to the fact that now the capital of the Kingdom is preparing for thousands of protest actions, in which citizens of the state will demand the immediate closure of the embassies of Israel and the United States. Initially, the Islamist movements of the Kingdom, inspired by the events in Cairo, planned to turn the anger of the masses solely against the Jewish state, but the appearance of the WikiLeaks revelations led them to direct their indignation towards the States. Dislike for these “two fortresses” unites many Muslims, Arabs, including Palestinians and Jordanians.
The Jordanian Islamists had planned to hold a demonstration of wrath in Amman on September 15, demanding that the Israeli ambassador be sent out of the country. The organizers of the protest called the pogrom of the Israeli embassy in the Egyptian capital "a victory over the Zionist enemy" and promised to support their actions. Virtually all major opposition parties in Jordan joined the call to “rub the nest of Zionist espionage from the face of the earth”.

Indicative is the fact that King Abdullah II of Jordan is not only not trying to stop such actions, but even makes anti-Israeli statements. In fact, the king is forced to yield to the pressure of the Islamists who have gained strength, fearing a repetition of the fate of Mubarak. Thus, Israel has recently lost almost all the "friendly" contacts in the Islamic world - Turkey, Egypt, Jordan.

Other Signals for Israeli Titanic

- Only bad news comes from Turkey for Israel. Thus, the Turkish craftsmen have developed for the F-16 fighters their own identification "friend or foe". Now it is possible to attack Israeli aircraft of the same model.

- Turkish Prime Minister Recep Tayyip Erdogan told the Arab television channel Al-Jazeera that the Turkish Navy forces will be escorted by humanitarian caravans sent to the Gaza Strip and Ankara will not allow them to attack, as in 2010 year. Then Ankara threatened to prevent the beginning of the joint Israeli-Cypriot development of the 12 gas field with a military force in order to “prevent the unilateral plunder of natural resources by Israel”.

- Events in Cairo - the pogrom of the Israeli embassy, ​​the Turkish leader called "the awakening of a real democracy", when thousands of people expressed their will, which the dictatorial regime suppressed for decades.

According to the president of the Institute of the Middle East, Yevgeny Satanovsky, "Israel fell like chickens in the gap between the formation of the Persian superpower and the Sunni response, the formation of the Sunni military-political bloc." In the Islamic world, there are shifts of global significance. And the revolution, excitement, the war in Libya - these are only visible events, hidden changes, much more. In fact, in the Islamic world at the present time there are two pretenders to dominate - Iran, which is thinking of a Shiite caliphate. And getting a nuclear weapon, it will sharply strengthen its position in the region. Tehran relies on Shiite communities in a significant spectrum of states, from Bahrain to Lebanon (the same Hezbollah in Lebanon). At the same time, Iran has good ties, including the military, with a number of ruling regimes - in Syria, Mauritania, Algeria, Libya under Gaddafi, etc.

In contrast, the Sunni bloc is being created - “this is the Wahhabi axis of Saudi Arabia-Qatar”. Moreover, Turkey will be its basis, "the military and economic engine of the block." Saudi ties with the United States and the membership of Turkey in the North Atlantic Alliance give them a good cover, protection. All countries of the Cooperation Council for the Arab States of the Persian Gulf and the kingdoms - Jordan and Morocco are catching up with this alliance. The bloc may also receive its nuclear weapons in the near future through Pakistan, which is associated with Saudi Arabia.

Turkey, in order to improve its image among the Arabs, is doing “spitting” in the direction of the European Union, has threatened Syria (the Alawites are the enemies of the Sunnis), and is now “fighting” with Israel. "Arab Street", despite the long-standing differences with the Ottoman Turks, absolutely delighted.

The Turks, for their part, are playing a game to revive the Ottoman Empire-2. Erdogan, Turkish President Abdullah Gul and Turkish Foreign Minister Ahmet Davutoglu are “breaking through” this plan. They rely on the common people, the Justice and Development Party, and the secular generals are consistently “cleansing”, changing the top of the army to their people. As in Egypt, there is a rapid Islamization of the armed forces. Turks sincerely believe that the current Arab states are their former rebellious provinces, which during the First World War spread to the side of the British Empire and stuck a knife in the back of the Ottoman Empire. The Turkish strategy is very consistent, for example, the scandal with "Flotilla freedom, "was clearly provoked, Israel" caught ". And the provocation was prepared at a time when Turkey and Israel were "allies."

According to Satanovsky, the confrontation between Israel and Turkey can easily turn into a war if “Erdogan finds this useful for himself.” But most likely there will not be a big war, at least for now. Rather, there will be “pinpoint clashes” that will cause an explosion of chauvinistic feelings in the Islamic world. After this, Egypt will finally sever relations with Israel and move to a "subordinate position of the Turkish-Saudi bloc."

The question is, how far will Ankara go? Or is it time to call it "The Brilliant Porte" !? Turkey is now in a very convenient position - in the economy is order, the army is strong, the Turks will not be expelled from NATO - they are needed to counterbalance the plans for building a Shiite caliphate.

It is clear that in the event of a catastrophic scenario, if “Israel starts to erase it from the map with an eraser, it will not go away alone,” it has a nuclear arsenal. Especially, the Egyptians need to think about this - a blow to the Aswan Dam will be a catastrophe for Egypt. According to the political scientist, at the present time “any development of events is possible, judging by the way Erdogan bit the bit.” The Turkish Prime Minister is bright, talented - but then Adolf Hitler in Germany was one of the best in all of her thousand years history manager, charismatic leader of the people, the crowd adored him. The German Fuhrer in 1938 was adorned on the cover of Life magazine as the man of the year. “Approximately the same situation is now in Turkey.”

We are in Yandex Zen
New alarming "bells" for Israel. Cold War with Turkey
"Israel is a big pain in America's ass"
7 comments
Information
Dear reader, to leave comments on the publication, you must to register.