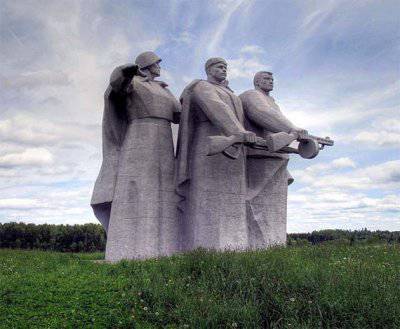 In December of this year, not only the peoples of Russia, but also all citizens of the former Soviet Union will celebrate the 70 anniversary of the defeat of the Nazi troops near Moscow.


Having failed in the attempt to break through to Moscow, the Hitlerite command in the autumn of 1941 began active preparations for a new offensive, the main goal of which was the Soviet capital. The directive to carry out this operation, code-named "Typhoon", was signed by Hitler 6 September 1941 of the year. He saw this attack as the last, final blow of the united Europe on Soviet Russia. "In the band from the Far North to the Crimea, you are standing today along with the Finnish, Slovak, Hungarian, Romanian and Italian divisions ... Spanish, Croatian and Belgian formations are joining now, the rest will follow them," said Hitler in his October address to the soldiers Eastern Front. “The upcoming attack, for the first time, may be considered by all nations of Europe as a general action to save the continent ... Today, finally, a prerequisite has been created for the last cruel blow, which before the start of winter must crush the enemy, deal a mortal blow to it ...” .

Started historical The battle of Moscow, however, Hitler's plans were not destined to come true. At the end of October, the offensive rush of his troops ran out. Having reached the outskirts of Tula, Serpukhov, occupying Naro-Fominsk, Volokolamsk, Kalinin, the Nazi troops were forced to stop. Hitler immediately flew into the headquarters of Army Group Center, trying to figure out why his plans were slipping. As a result, the transfer of additional forces and assets from other sectors of the front and from Germany to the Moscow direction began.

November 16 attack on Moscow resumed, but this attempt to seize the capital of the Soviet state, as you know, ended in failure. Hitler's troops were stopped at the approaches to Moscow, and then thrown back on 100-250 kilometers. Under Moscow, 11 tank, 4 motorized and 23 German infantry divisions were then defeated. The Wehrmacht generals, including field marshals Brauchitsch, Bock, and Colonel-General Guderian, lost their posts to 35. These are undisputed historical facts.

It would seem that the question is clear. Thanks to the unparalleled resilience and heroism of the Soviet fighters and commanders, the commanding art of military commanders, the enemy at the walls of Moscow in 1941 was stopped and reversed.

Meanwhile, in some reputable periodicals, publications sometimes appear, seeking to defame the defenders of Moscow, questioning their feat in the fall of 1941.

So, 7 of July this year in Komsomolskaya Pravda under the general heading “Secrets of the State Archive” published an interview with the director of this archive, Doctor of Historical Sciences Sergey Mironenko, who, answering the questions of the correspondent, ridiculed the memory of the defenders of the capital, calling the feat of twenty-eight heroes Panfilov’s myth, asserting that “there were no heroically fallen Panfilov heroes”, referring to the fact that after the war “one by one people began to appear that were to lie in the grave”.

It turned out that not all "twenty-eight" were killed. Which of these? The fact that six of the twenty-eight named heroes, being wounded, shell-shocked, despite all survived the battle on November 16, 1941, is refuted by the fact that Dubosekovo was stopped at the junction tank enemy column rushing to Moscow? Does not refute.

Yes, indeed, it later became known that not all 28 heroes died in that battle. So, G. M. Shemyakin and I. R. Vasilyev were seriously injured and ended up in the hospital. DF Timofeev and I. D. Shadrin were captured by the wounded and experienced all the horrors of fascist bondage. The fate of D.A. Kouzhebergenov and I.E. Dobrobabina, also survivors, but for various reasons excluded from the list of Heroes and still not restored in this capacity, was difficult, although their participation in the battle does not cause the Dubosekovo junction doubt that convincingly proved in his study, the doctor of historical sciences GAKumanev, personally met with them. By the way, I recommend S. Mironenko to familiarize yourself with the book of Georgy Aleksandrovich Kumanev, “Feat and Forgery”.

By the way, the fate of these Panfilov heroes who were “resurrected from the dead” was the reason for writing in May 1948 a letter from the Chief Military Prosecutor Lieutenant General of Justice NPAfanasyev to the Secretary of the VKP (b) Central Committee A.A. Zhdanov, who was so shocked Director of the State Archive of the Russian Federation.

However, Andrei Aleksandrovich Zhdanov turned out to be more objective than S.V. Mironenko, who called himself an anti-Stalinist interview. He immediately determined that all the materials of the “investigation of the 28 Panfilov case”, set out in the letter of the Chief Military Prosecutor, were too clumsy, the conclusions of what are called “white stitches”. Employees of the military prosecutor's office clearly overdid it, trying to demonstrate their over-vigilance to the country's political leadership. As a result of the further course, the “case” was not given, and it was sent to the archive, where it was discovered by the historian Mironenko.

By the way, the correspondent of “Red Star” A.Yu.Krivitsky, who was accused of the fact that 28’s Panfilov’s exploit is the fruit of his author’s imagination, later, recalling the course of the investigation, said: “I was told that if I give up the testimony I completely invented the description of the fight in Dubosekovo, and that I did not speak to any of the seriously wounded or surviving Panfilov members before publishing the article, I would soon end up on Pechora or Kolyma. In such an environment, I had to say that the fight at Dubosekovo is my literary fiction. ”

Be that as it may, the feat of 28 Panfilov heroes during the war years played an exceptional mobilizing role. He became an example of resilience for the defenders of Stalingrad and Leningrad, with their name, our fighters repelled the fierce attacks of the enemy on the Kursk Bulge.

In my opinion, the feat of the fighters who stopped the enemy at the Dubosekovo junction is indisputable. Burnt enemy tanks speak for themselves. Another issue is that the number of heroes should not be limited to the number 28. In the defense zone of the 316 division, including at the Dubosekovo junction, the anti-tank defense system, created under the leadership of General Panfilov, effectively worked. Tank-dangerous directions were covered not only by tank destroyers, but also by artillery and engineering obstacles.

As a result, only in the defense zone of the 2 battalion of the 1075 rifle regiment that day the enemy’s 24 tank was destroyed and burned, and the enemy’s tank group was detained for more than an hour’s 4. At the same time, enemy tanks were destroyed in the area of ​​the village of Petelino and in several other places.

Today we kneel before the bright memory of the fighters and commanders who defended Moscow in the autumn of 1941, including the soldiers of the 316 Infantry Division of General I.V. Panfilov, the 32 and 78th Infantry Divisions of colonels V.I. .Polosukhina and APBeloborodova, the combined cadet school regiment them. The Supreme Soviet of the RSFSR Colonel S.I.Mladentsev, many other compounds and parts.

The “historian” Mironenko, who didn’t smell powder, dares to call the feat of the fighters and commanders of the Panfilov division who lost 9920 people (3620 killed and 6300 wounded) from 11 700, which were counted at the beginning of the battle, as a myth. By the way, the commander of the Army Group "Center" Field Marshal F. Bok in one of the reports of the 4 German Tank Group, General Colonel E. Hepner, called Panfilov "a wild division fighting in violation of all the charters and combat rules, the soldiers of which they do not surrender, are extremely fanatical and do not fear death. ”

In the battles near Moscow, thousands of Soviet soldiers gave their lives. Among them, the Hero of the Soviet Union, Major-General I.V. Panfilov, 22 from 28, well-known defenders of the crossing, Dubosekovo and many, many others. And this is the historical truth. Moscow was defended by people, many of whom laid down their heads in this terrible battle, this is not “fiction”, as S. Mironenko asserts in an interview with a reporter from a reputable newspaper, this is true, this is a bitter truth.

I deliberately put the word “historian” in front of the name of S. Mironenko in quotation marks, because I believe that a person who hates the history of his homeland, and judging by the publication of the “Komsomolskaya Pravda”, is just that, is hardly entitled to call himself a learned historian.

In the newspaper, an interview with S. Mironenko is illustrated with a reproduction of V. Pamfilov's painting “The Feat of the Panfilov Guardsmen” with the posting “other, real, and not made-up heroes defended Moscow in 1941.” Well, name these real heroes, tell about each of them - this is the task of the historian.