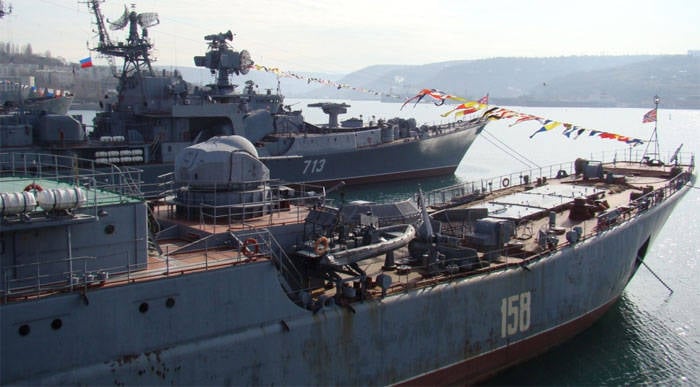 The gas scandal between Russia and Ukraine affected not only the political relations between the two powers, but also on the Black Sea Navy Russian Navy. Today, for the sake of Gazprom’s victory, the Russian authorities are ready to finally abandon Sevastopol.


The first, but by no means quiet, bell in the spoiled relations between the two former friendly republics was a humiliating scandal for the Russian Navy in the Kerch Strait. We are talking about the forced setting by the Ukrainian border forces on the anchors of the large landing ship "Azov" of the Black Sea Fleet of the Russian Federation, it was September 8. BDK "Azov" left the port of Sevastopol and went to the water area of ​​the Sea of ​​Azov to visit the chiefs - to participate in the celebration of the Day of the city of Azov.

Russian sailors at a loss from what is happening, because the water space between the Ukrainian Kerch and the Russian Kuban up to this time is considered to be a zone of co-navigation of the two states. It was not demarcated and, as a result of the official maritime border, was not drawn on the maps.

The Kremlin continues to insist on two-way use of the strait. At the same time, Kiev is trying to establish sole control over the fairway and the right to collect a fee for the passage of all vessels. As the saying goes, “wanting doesn’t mean being able to.” After all, this is where the traditional route passes, on which no one has ever delayed the Russian navy men.

It was in connection with this that the Russian sailors were at a loss from the order that came to them from the ship’s control center of the sea-going ships of Kerch and in which it was stated that the BDK Azov should anchor at the entrance to the Kerch Strait. “This is a precedent! Previously, such requirements were not made to the ships of the fleet, the BSF headquarters officer said. According to him, the sailors refused to comply with the demands of the Ukrainian side. The crew decided to move to the Sea of ​​Azov across Russian territory - through the shallow Temryuk Strait. The case is risky, but a relatively light and flat-bottomed landing ship may well break through. The same route, the sailors are going back.

Today there are two different versions of what happened. At first, referring to a source in the Russian Black Sea Fleet’s General Staff, the Crimean media stated that the crew of the combat ship had been asked to hire a Ukrainian pilot and pay a fee for passage through the strait water area. 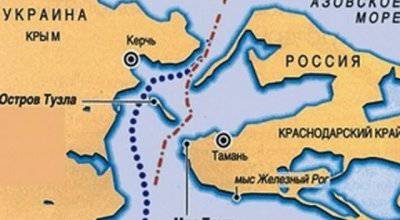 A diplomatic explanation of the conflict followed. According to him, problems arose because of documents that were incorrectly executed.

“We don’t know how earlier the high authorities of Russia and Ukraine agreed upon the passage of combat ships, but today the ship of the Russian Black Sea Fleet arrived unexpectedly, without prior warning and coordination,” say representatives of the Kerch Port Authority. - The current pilotage service is a commercial organization that takes a fixed fee for its services. Pilots had a completely justified question: who will pay for their work? ”

It turns out that they suddenly forgot how it was "earlier." Forgot that the Black Sea Fleet of Russia on the traverse of Kerch quite safely did without third-party pilotage!

In this situation, we can recall how for several years in a row mass media exaggerated versions that Kiev in exchange for new ones and, one has to admit, considerable discounts on Russian natural gas are ready to make significant concessions in the dispute over the Kerch Strait. It seems that the topic has been completely exhausted. Gazprom is clearly not keen to come to terms with the Kiev dependents. It was for victory in the ridiculous, reckless "third gas war" that Moscow put the further fate of the Black Sea Fleet on the line.

Sources of the Free Press, which have official information at their disposal, unanimously declare that the Ukrainian side stopped the Azov BDK in response to the emerging threats from Russia to terminate the Kharkiv agreements. On September 10, Alexey Urin, an adviser at the Russian embassy in Kiev, who heads the economic policy group, told reporters about such intentions.

Recall that in April 2010 in Ukraine’s Kharkiv, the “newly elected” presidents of Russia and Ukraine agreed to extend the stay of the Russian Black Sea Fleet in Ukraine until 2042. Since that time, this treaty is essentially the only large-scale achievement of modern Russian-Ukrainian relations at the interstate level. And also, perhaps, the only really fulfilled promise of those mentioned in the election campaign and that Yanukovych gave to the many millions of people in the south-east of the country. He did not do anything else for the Russian-speaking electorate who had given him his votes.

“The long-term lease of the base of the Russian Black Sea Fleet in Sevastopol was tied to the price of the gas supplied. Today, Russia allows for a break in the Kharkiv agreements if Ukraine goes to court to review existing gas contracts, ”said Alexei Urin. “That is, it is practically a rejection of the bases of the Black Sea Fleet in the Ukrainian Crimea.”

Last Thursday, during the Moscow City Council meeting, amendments were adopted to the current city budget, and simultaneously in three readings. The previously adopted estimate of the core international program and lobbied by the ex-mayor Yury Luzhkov has been annulled, the Black Sea Fleet will not receive the 70 million rubles allocated this year. Although the money was directed not only to improve the lives of sailors, but also to organize the combat duties of the Black Sea Fleet ships in the Mediterranean.

Tatyana Yermakova, the head of the Russian Community of Sevastopol, said: “The termination of assistance to the Russian Black Sea Fleet by the Moscow mayor’s office could not have happened without prior approval and approval from the top leadership of Russia. The Moscow government accepted, decided, approved ... I beg you, do not make us laugh! We know perfectly well who decides. They themselves have not created anything, but at the same time how skillfully they destroy the power of our power. So it turns out, on the one hand, the campaign of Ukrainian nationalists “Down with the Black Sea Fleet! Return our lighthouses! ”And on the other hand, the Motherland quietly and confidently destroys its main base in the region.”

Today, the absolute majority of the population of the “city of Russian seamen” thinks so. The inhabitants of Sevastopol live in a fleet - and they perfectly see what is happening in reality. Over the past decade and a half, the combat strength of the Black Sea Fleet has decreased by more than 10 times. Of the ships inherited by Russia with the division of 338 with Ukraine, at most three dozen remained on the move.

The “youngest” BDK “Caesar Kunikov” was launched in the distant 1986 year. And because of this, this amphibious assault ship was appointed as the flagship of the Russian Black Sea Fleet group during a fighting confrontation with a group of Georgian boats in the summer of 2008.

Since then, the Kremlin has repeatedly and loudly announced large-scale plans to update the Black Sea Fleet. It was reported about the construction of two frigates for Sevastopol, new corvettes and submarines, doubling the power of the sea aviation new fighters Su-30SM.

As a result, there are no ships, no one has signed a contract for the supply of aircraft. And now the Moscow budget has been revised and "optimized", thereby leaving the main base of the Black Sea Fleet to the final and complete devastation of Minister of Defense Serdyukov.

In the autumn of 2010, Konstantin Gryshchenko, the head of the Ministry of Foreign Affairs of Ukraine, reassured deputies of the European Parliament and argued that the Black Sea Fleet of Russia in Sevastopol does not pose a threat to Europe. According to the Ukrainian diplomat, the Russian fleet is not a real threat to anyone at all. “Most warships have served 40 for over a decade. It is assumed, of course, that they will be replaced in the coming years, but in reality they do not represent a threat to NATO. This is a combat, but a local fleet to solve local goals, ”Mr. Gryshchenko fully rightly said.
Ctrl Enter
Noticed oshЫbku Highlight text and press. Ctrl + Enter
We are
Master class on posing on the ears of GiviThe state and prospects of development of the naval forces of Ukraine (2013)
19 comments
Information
Dear reader, to leave comments on the publication, you must to register.