The amount of ice in the Arctic decreases on the eyes

February 3 2015
32
Over the past three decades, the volume of multi-year ice in the Arctic has decreased significantly. Perennial, or, as it is usually called, pack ice, is such ice that is able to persist after at least two summer periods of melting. The thickness of such ice is usually at least three meters. At the same time, every winter, sea ice gradually increases and fills with itself almost the entire basin of the Arctic Ocean.


Arctic ice reaches its maximum in March. At the same time every summer the fields of perennial ice are reduced in size, reaching a minimum by September. Ice, which is able to survive at least one Arctic summer, is usually thicker, and the likelihood that such ice can survive even several summer melting periods is higher. Scientists note that after the 1980-s, the number of multi-year ice in the Arctic has decreased significantly.

It is necessary to understand that the Arctic ice is very important for the formation of climate on our planet. The ice cap, which is formed in the Arctic, reflects the sun's rays and does not allow the Earth to overheat. Also, the Arctic ice is very important in the circulation of water in the world's oceans. Many experts today say that already in the 21st century most of the Arctic waters will be free of ice in the summer, which will open up new prospects for the transport of goods by sea in this region. 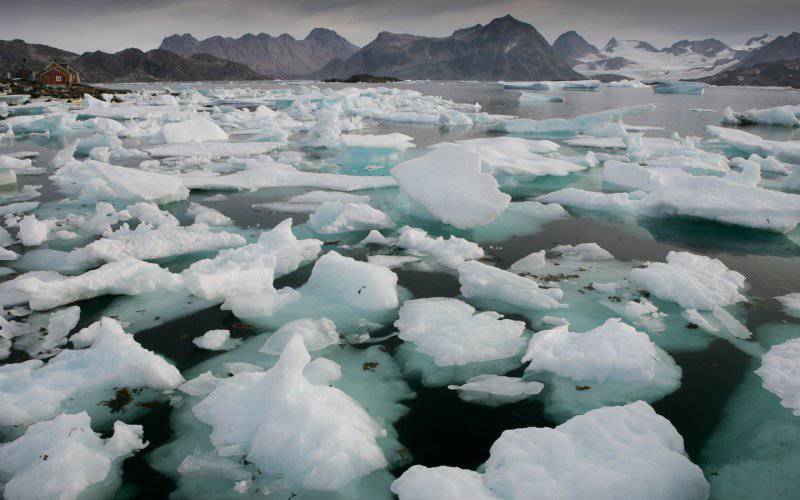 The way ice volumes in the Arctic changed from 1987 to 2014, is clearly seen in the animation, which was introduced by the US National Oceanic and Atmospheric Administration (NOAA). On the Internet-posted video, the ice was divided into 9 groups by age, each of these groups colored by its own color. So, the youngest, annual ice, which was formed only in the last winter, has a dark blue color. At the same time, the oldest ice, which is more than 9 years old, has a white color. Dark gray spots show coastal areas where spatial resolution is lower than on land or ice-free water.

The video clearly demonstrates that the sea ice in the Arctic Ocean is not in one place, it is in constant motion. So, east of Greenland is the Fram Strait, through which ice can leave the Arctic Ocean. At the same time, earlier ice losses through this strait were compensated by increasing the ice in the area of ​​the Beaufort gyre, which is in northeast Alaska. In this area, water currents move clockwise. In this area, multi-year ice could drift for several years, moving along with the currents.

But already at the turn of the century, the conditions of the Beaufort cycle for perennial Arctic ice had deteriorated significantly. The average temperature of the water has increased, the process of ice melting has accelerated, especially when passing through the southern part of this circulation. Since 2008, very old ice has shrunk to a small narrow strip lying along the Canadian Arctic Archipelago. 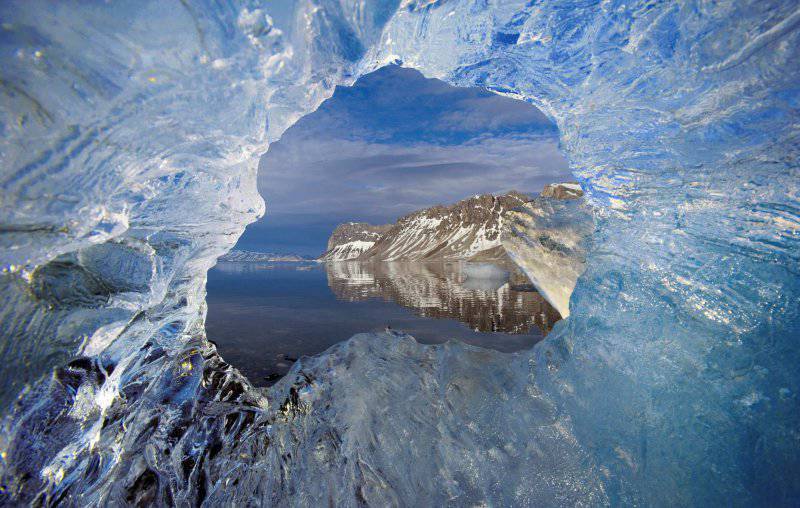 In September, 2012, the melting speed of the Arctic ice broke all records. At the same time, in 2014, the melting rate slowed down. This fact allowed some volumes of annual ice to survive the summer and become multiyear. From March 2013 to March 2014, the volume of one-year ice decreased from 78% to 69%. This means that much of the Arctic ice in 2013 was able to survive the summer thaw. Over the same period, the volume of two-year ice grew from 8% to 14%, and four-year ice from 7,2% to 10,1%.

In general, by March 2014, the volume of multi-year ice was able to return to the average in 1981-2010, but despite this, the authors of the annual Arctic report believe that in the long-term, the trend is aimed at reducing its quantity. So if in 1980-ies the oldest ice, to which the ice was 4 and older, was 26% of the total volume of Arctic ice, by March 2014, its volume decreased by 2,5 times to 10%. If we talk about ice age from 7-8 years and older, then such ice is becoming more and more rare.

As noted above, 2012 has become a record year for the Arctic. This year, researchers have recorded a whole series of diverse climate records that are associated with global warming on the planet. Significant reductions in sea ice, snow cover and maximum vegetation spread in the tundra are among these records. This information was presented in a report that was compiled by the US National Oceanic and Atmospheric Administration. 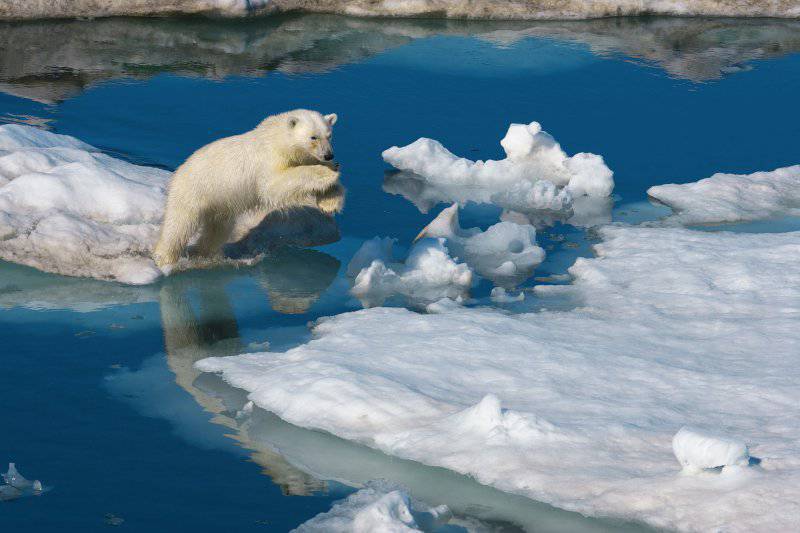 All these climate records tell us that the Arctic is unlikely to be able to return to its former state. In June, the 2012 of the year in the northern hemisphere was recorded a record minimum of snow cover, and in May of the same year in Eurasia the absolute minimum of the snow area was set. In September 2012, the Arctic ice area fell to a record low for the entire duration of the satellite observations that began in the 1979 year. In addition, experts noted the melting of the Greenland Glacier in July 2012, almost all of its area. One day, the melting process captured 97% of its surface.

The authors of the annual report, which include 140 scientists representing the 15 countries of the world, note the changes that are occurring with vegetation. So in the tundra from 2003 to 2010, the vegetative period of vegetation increased significantly in time. There are also changes in the animal world. So in Northern Europe the Arctic fox turned out to be close to complete extinction, which had a natural rival who came from more southern regions - the red fox. Also, the conducted studies record a significant growth in the Arctic seas of phytoplankton, the biological productivity of which has grown almost tenfold. Oceanologists are practically sounding the alarm, registering a rapid rise in the temperature of the ocean’s water in those areas that have become ice-free, while meteorologists are talking about an increase in extreme weather events on the planet.

According to scientists from Norway, Great Britain and Spain, by the end of the XXI century the Arctic ice will be able to completely melt in the summer. The researchers conducted a comprehensive analysis of the climate of the Pliocene of the Neogene period, which was observed on the planet 5,3 a million years ago and came to an end 2,5 a million years ago. To do this, they needed to study the fossils of microorganisms and algae, which were located on the seabed near the island of Svalbard. With the help of chemical analysis, they were able to track all the climatic changes of that era. 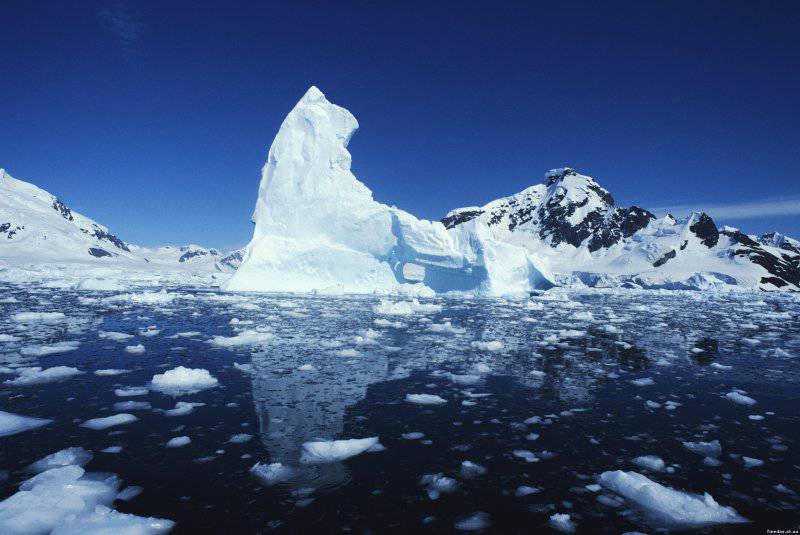 In the course of their research, they found out that 4 a million years ago there was no snow in the Arctic and this situation could happen again. Ice cover at the north pole of the Earth was formed only 2,6 million years ago, which led to a change in ocean currents and climate on Earth. The climate on our planet has become colder and drier. At the same time, scientists proved that ice in the Arctic Ocean appeared earlier than on the continents of the Northern Hemisphere.

Before that, scientists from the United States found that in 2014, the ice area had decreased to 5,02 a million square kilometers. Every 10 years at the North Pole, the amount of ice decreases by about 13%.

Ctrl Enter
Noticed a mistake Highlight text and press. Ctrl + Enter
We are
Situational analysis of the death of the MH17 flight (Malaysian Boeing 777), made on the basis of engineering analysis from 15.08.2014Results of the week. “Now Humpback! I said: Hunchback! ”
32 comments
Information
Dear reader, to leave comments on the publication, you must to register.