Israel can do nothing without US help ("Haaretz", Israel) 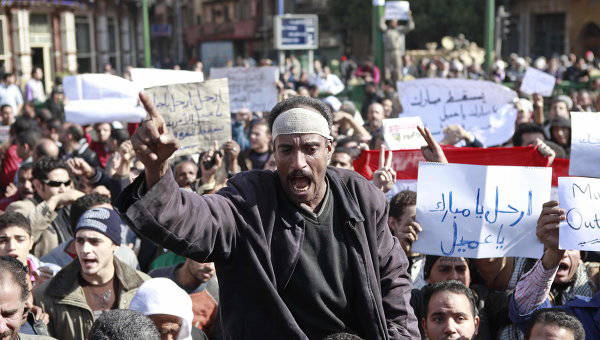 The fears and fears that at the beginning of this year caused the Arab Spring in Israel have found expression in recent days. Egyptian protesters broke through the concrete barrier and broke into the Israeli embassy in Cairo, expelling Israeli diplomats from the country.

The panic evacuation of the Israeli diplomatic corps using the IDF air force planes, which occurred after the intervention of US President Barack Obama, reminded the Islamic revolution in Iran in 1979 year.

Seven months after the protesters from Tahrir Square led to the fall of the regime of Husni Mubarak, they tore apart one of the symbols of the peace treaty, the Israeli flag, which fluttered in the Egyptian capital throughout 31 of the year. We are unlikely to see him again in the same place in the foreseeable future.

Historians who will describe the collapse of the Israeli-Egyptian peace treaty will begin with a description of the last years of the Mubarak regime. During these years, Cairo gradually lost control of the Sinai Peninsula, and the desert turned into an uncontrollable area, where smugglers operated who transported weaponas well as traffickers women and African refugees.

The Sinai disarmament agreement, according to which the Egyptian army was banned from the Peninsula, effectively ceased to exist after Israel left Gaza in the 2005 year. This trend has intensified in recent months. Time after time, the Egyptians asked Israel (and received consent) to place another military contingent in Sinai near the Israeli border. "Temporarily" to restore order in the area.

From the point of view of the Egyptians, this was an excellent opportunity to emasculate the content of agreements imposing restrictions on their military presence on the peninsula and to return full sovereignty over the territory from the Suez Canal to the Negev.

In the 70-s, when a peace treaty was signed, the Egyptian army at Sinai was perceived by the Israelis as the biggest threat to the country's security. Now, the Egyptian soldiers in Sinai seem to be the least evil compared with the most dangerous power vacuum on the peninsula. Prime Minister Benjamin Netanyahu fears that Sinai will turn into a huge sector of Gaza, overflowing with weapons and rocket launchers designed to fire at Israeli territory.

The fence, which Israel is building along the Egyptian border, is designed to maintain current security, as well as to prevent terrorist attacks and the entry of African refugees. This fence does not provide an answer to the strategic dangers that are rapidly developing beyond the Egyptian-Israeli border.

The crisis situation around the Israeli embassy in Cairo arose in connection with the death of five Egyptian soldiers on August 18 during a border incident resulting from the terrorist attack near Eilat. Demonstrators from Tahrir Square and Egyptian politicians, disappointed by the slow pace of the country's reform process, turned their anger against the most hated facility in Cairo - against the Israeli embassy.

The apologies that Secretary of Defense Ehud Barak and assurances that Israel will actively participate in the investigation of the incident did not have any impact on public opinion in Cairo. The rallies continued, and a week after the expulsion of the Israeli ambassador from Ankara for a similar reason (anger over the death of Turkish participants flotilla) the ambassador of Israel was expelled from Cairo. The only difference is that in Turkey the initiator of this step was the government, and in Egpit it was done by street demonstrators whom the authorities tried to resist.

Netanyahu and his government are proud of their firm and uncompromising position in everything that concerns national dignity. The head of government is convinced that his refusal to apologize to Turkey for the death of its citizens last year during the capture of the flotilla to Gaza by Israeli warships is a fair decision. According to Netanyahu, the Arab world is closely watching the actions of Israel, and public apologies to the Turks would be perceived as an unforgivable weakness.

However, Netanyahu did not just refuse to apologize. Instead of reducing the degree of conflict with Turkey, Israel entered into an extremely dangerous verbal confrontation with Ankara. Turkish Prime Minister Erdogan threatened that the next flotilla heading for the coast of Gaza would be accompanied by the Turkish Navy. In response, Netanyahu gave a media visit to the Israeli Navy base. Foreign Minister Avigdor Lieberman offered assistance to the Kurdish rebels, as opposed to Turkish aid to Hamas in Gaza. And publicly voiced this crazy idea.

Netanyahu and Lieberman are big heroes in words, but at the crucial moment when Egyptian demonstrators besieged the Israeli embassy, ​​it turned out that we have no influence in Cairo. Netanyahu was forced to seek help from his political opponent, Barack Obama, in order to rescue Israeli diplomats from harm. It turned out again that Israel is unable to cope with anything without American assistance.

Netanyahu hopes that, having lost the Turks and Egyptians, Israel will be able to move closer to Saudi Arabia and the Gulf oil principalities, which fear that the Arab wave of blast will sweep away their regimes. In the West, Netanyahu is trying to become a close ally of Greece, Bulgaria and Romania. During a trip to the Balkan countries, the hosts showed Netanyahu monuments to national heroes who were killed by the Ottoman rulers. There you have - a platform for friendships.

But all this stuff. The political tsunami predicted by Defense Minister Ehud Barak hit Israel even before the UN declared a Palestinian state. Israel was left all alone - against Iran, Turkey, Egypt, which in the past, at different times, were our close allies. Netanyahu is convinced that what is happening in the region does not depend on anyone's will, and Israel cannot and should not do anything - just stand firm.

Israel really could not prevent the strengthening of Erdogan’s power and the collapse of Mubrak. How can he not stop the development of the Iranian nuclear project. The decline of the American Empire is also not the fault of Netanyahu. However, the Prime Minister didn’t do anything to mitigate the negative effect of the ongoing processes. The result is obvious - the political and strategic position of Israel is much worse during its rule.