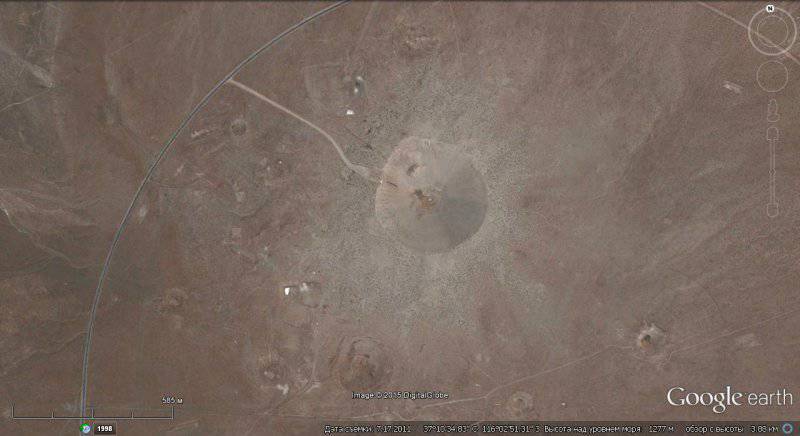 Even the smallest states that have armed forces are forced to spend considerable funds on the creation, equipment and maintenance of shooting ranges and training grounds, where official paramilitary units work out tactics of warfare, receive and perfect their skills weapons.

Naturally, for the full-fledged development of combat techniques or the testing of long-range missile-artillery, powerful aircraft weapons or air defense systems, polygons are required, which can reach dozens and even hundreds of square kilometers.

Even larger sizes of territory derived from national economic activity are required for testing nuclear weapons. In this regard, most of the nuclear test sites are located in a deserted sparsely populated area.

Perhaps the largest military and test sites in terms of area are located in the United States. A special place here are the sites of nuclear testing.

First in stories A test nuclear explosion (Operation Trinity) was carried out on July 16 1945 of the year, at the test site in 97 km from the city of Alamogordo, New Mexico.

It was a plutonium bomb of implosive type, called “Gadget” (eng. Gadget). The bomb blast was equivalent to approximately 21 kt in TNT equivalent. This explosion is considered the beginning of the nuclear age.

As a result of the explosion of a nuclear device installed on a metal tower, within a radius of several hundred meters, sintering of sandy soil occurred, and a glassy crust was formed. However, over time, nature has taken its toll, and now the site of a nuclear test is not very different from the surrounding desert. 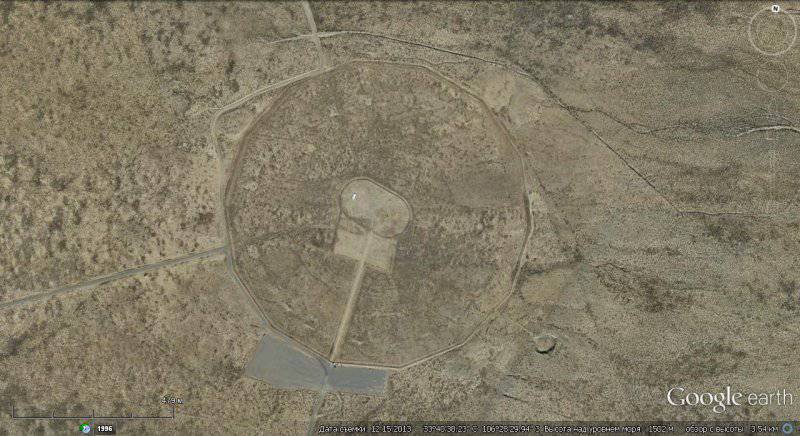 Satellite image of Google Earth: the site of the first nuclear test

From 1946 to 1958, the atolls of Bikini and Eniwetok, Marshall Islands, became the site of the American nuclear tests. In total, on these atolls, the United States conducted 1946 nuclear tests in the period from 1958 to 67. 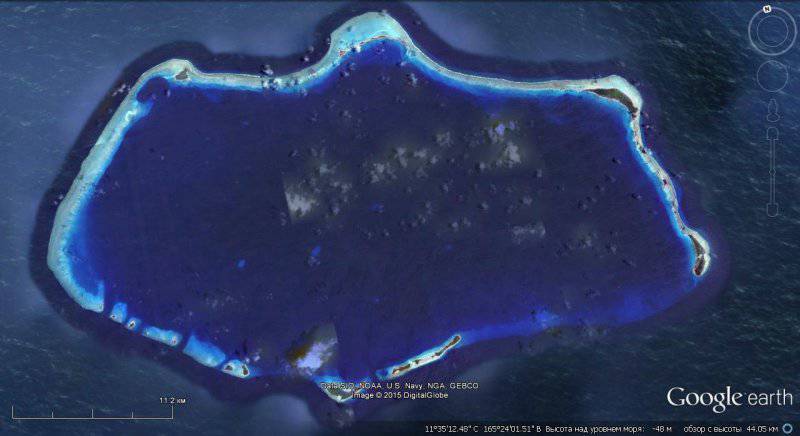 Satellite image of Google Earth: Bikini Atoll. In the northwestern cape, a crater formed during the testing of the “hydrogen bravo” hydrogen bomb with 15 power Mt 1 in March 1954 was visible 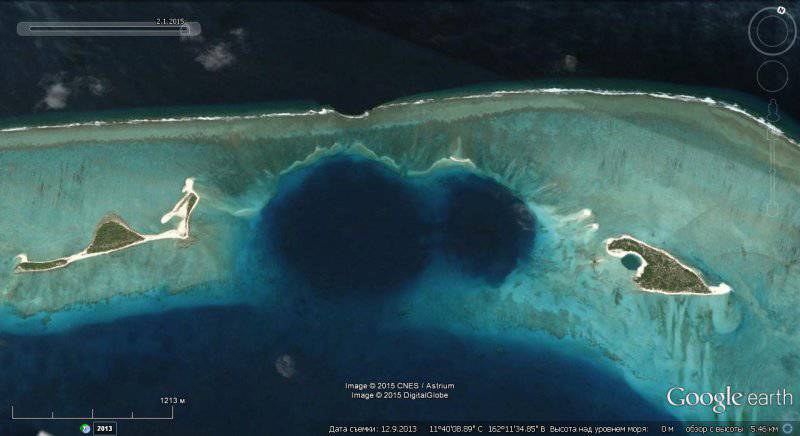 The largest US nuclear test site is the Nevada Test Site (English Nevada Test Site), created in 1951 year. The landfill is located in the south of Nevada in Nye County, 105 km north-west of Las Vegas, in an area of ​​about 3500 km². Here 928 test nuclear explosions were carried out, 828 of which are underground. The first nuclear explosion at this site was conducted on 27 on January 1951 of the year. It was a tactical nuclear charge with power 1 CT. 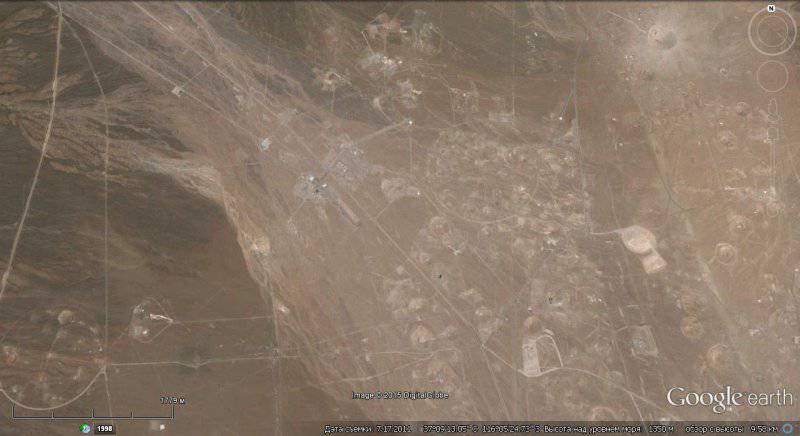 Buildings typical for European and American cities were erected at the site, various equipment, vehicles and fortifications were located. All these objects were at different distances and at different angles to the points of the explosion. During tests of nuclear charges, high-speed cameras located in protected locations recorded effects from blast waves, radiation, light radiation and other damaging factors of nuclear explosions.

6 July 1962, as part of Operation Lemeh, a program to study the use of nuclear weapons for mining, craters and other "peaceful" targets, was a nuclear test of the Storax Sedan (English Storax Sedan).

A thermonuclear blast with a power of about 104 kt raised the dome of the earth by 90 m above the desert. In this case, more than 11 million tons of soil was thrown. As a result of the explosion, a crater with a depth of 100 m and a diameter of about 390 m was formed. The explosion caused a seismic wave equivalent to an earthquake measuring 4,75 magnitude on the Richter scale. 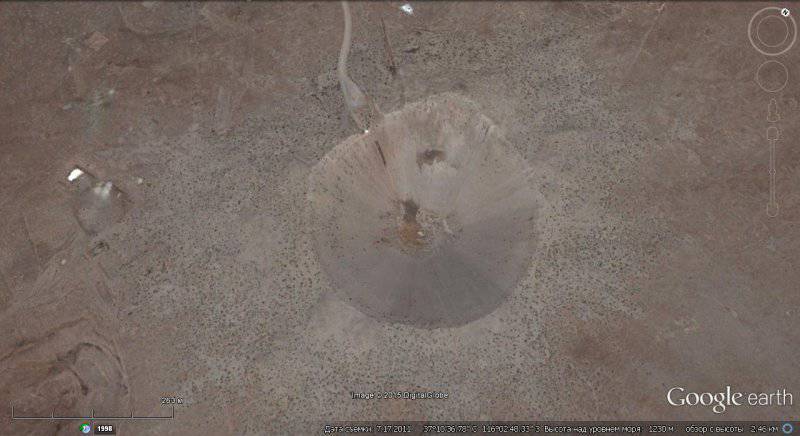 The explosion produced a very large number of radionuclides. The level of radiation at the edge of the crater after 1 an hour after the explosion amounted to 500 X-rays per hour. Of all the nuclear tests conducted in the United States, Sedan ranks first in the overall activity of radionuclide deposition. It is estimated that it contributed to the release of about 7% of the total amount of radioactive fallout that fell on the US population during all nuclear tests at the Nevada test site. But already after months of 7 it was possible to walk safely along the bottom of the crater without a protective suit.

The administration of the nuclear test site in Nevada arranges monthly tours of the territory, the queue for which is scheduled for months in advance. Visitors are not allowed to take with them video fixtures (photo and video cameras), binoculars, mobile phones and other equipment, and also prohibit taking stones from the landfill for memory.

In the US, there are several rocket testing centers and test sites. The most famous of these is the US Air Force Base at Cape Canaveral (eng. Cape Canaveral Air Force Station, or CCAFS), where the Eastern Rocket Range (eng. Eastern Range) is deployed. It is located southeast of the Kennedy Space Center (NASA) on the adjacent Merritt Island. 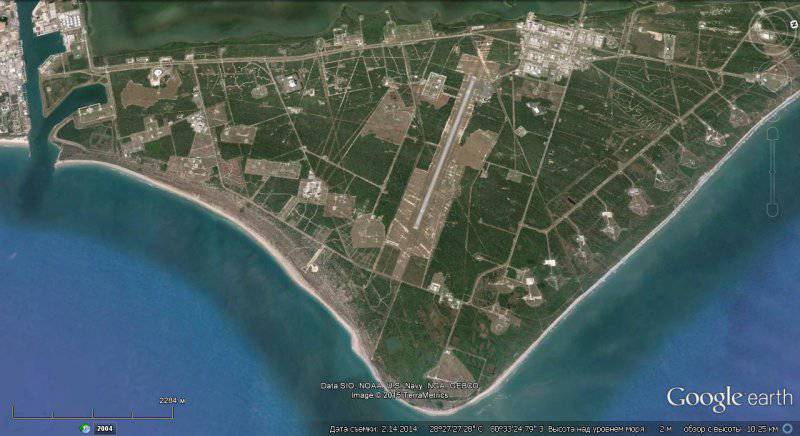 On the landfill are four starting tables. Currently, the Delta II and IV, Falcon 9 and Atlas V missiles are launched from the test site. The test center airport has a runway more than 3 km in length near the launch complexes for air cargo delivery. 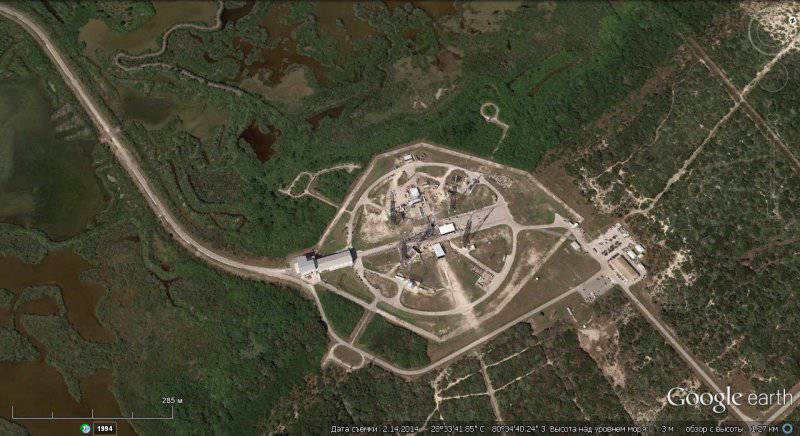 Satellite image of Google Earth: the launch pad for the Atlas V launch vehicle of the Eastern Rocket Range 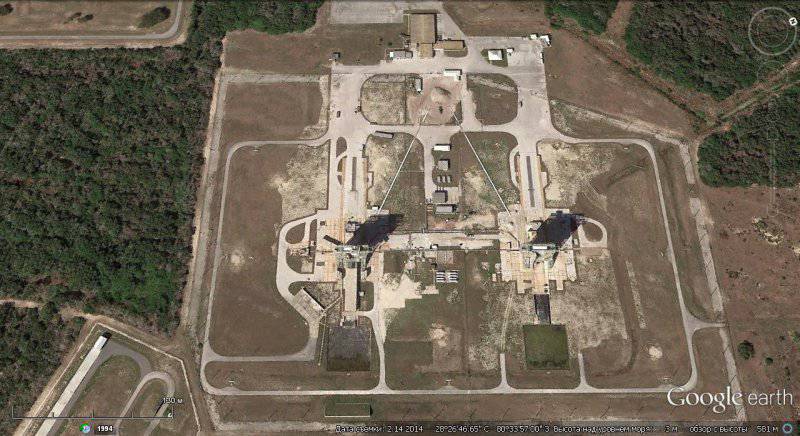 At the site there is a museum of rocket and space technology, which presents samples that had previously been tested from the launch sites of the site. 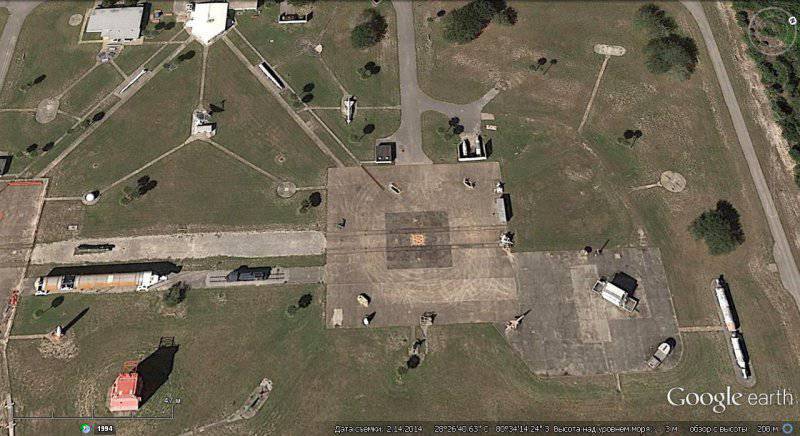 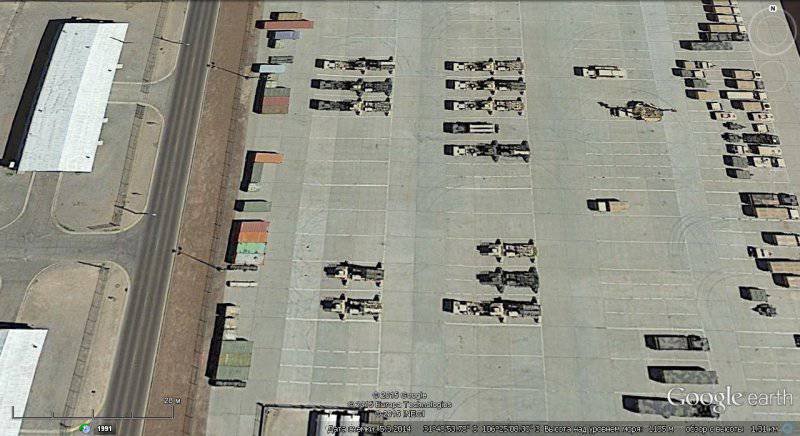 Largest test aviation the center is the Edwards Air Force Base, the United States Air Force base located in California. Got its name in honor of the US Air Force test pilot Glen Edwards (born Glen Edwards). 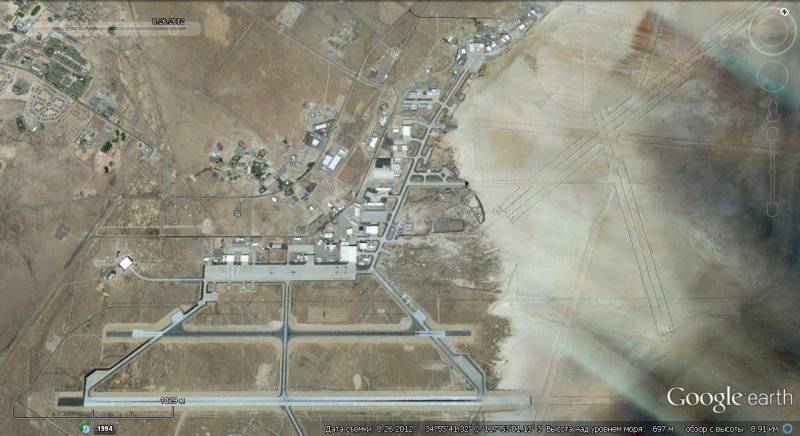 Among other structures, the air base has a runway, which is the longest runway in the world, its length is almost 12 km, however, due to its military status and ground cover, it is not intended to receive civilian ships. The strip was built to land a test model of the Enterprise spacecraft (OV-101), which at the end of the 1970-s was used only for testing landing techniques and did not fly into space. Near the runway, on the ground, built a huge compass with a diameter of about a mile. The airbase was used to land the shuttles, being for them a reserve airfield, along with the main one in Florida.

At the Edwards airbase, all samples of combat aircraft adopted in service in the United States undergo a test cycle. This fully applies to both manned and unmanned aerial vehicles. 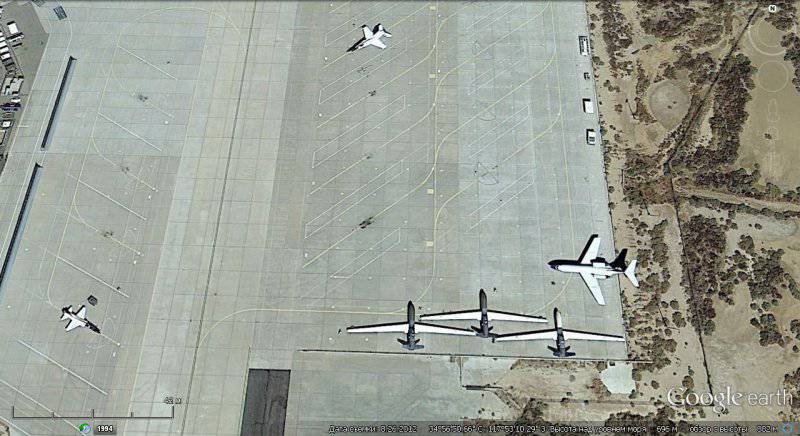 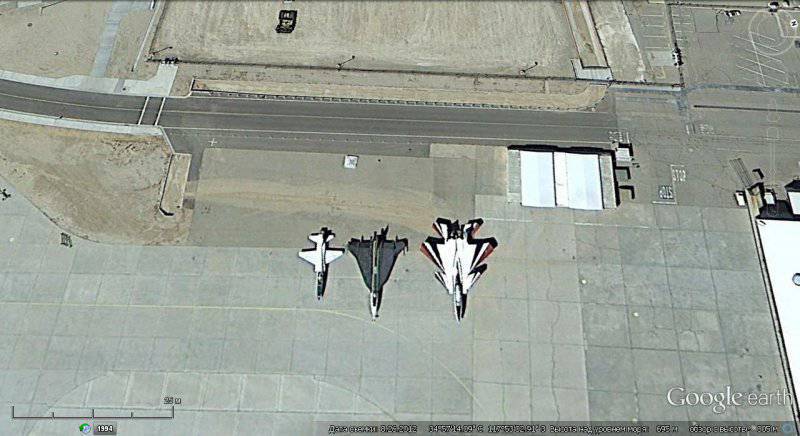 The US Air Force Warfare Center is located at the Nellis airbase in Nevada. The main function of the air base is the training of American and foreign fighter pilots. Various international exercises are regularly held at the airbase, of which Red Flag is the most famous. 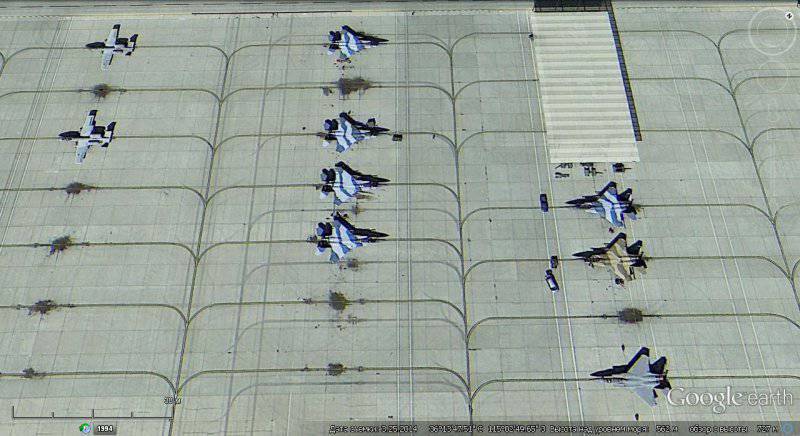 Satellite image of Google Earth: F-15 fighters painted in camouflage of the “likely enemy” in the parking lot of the Nellis airbase

In addition to the standard aircraft, at the air base there are specially modified aircraft F-15 and F-16, in an atypical coloration which in the exercises depict "enemy aircraft". 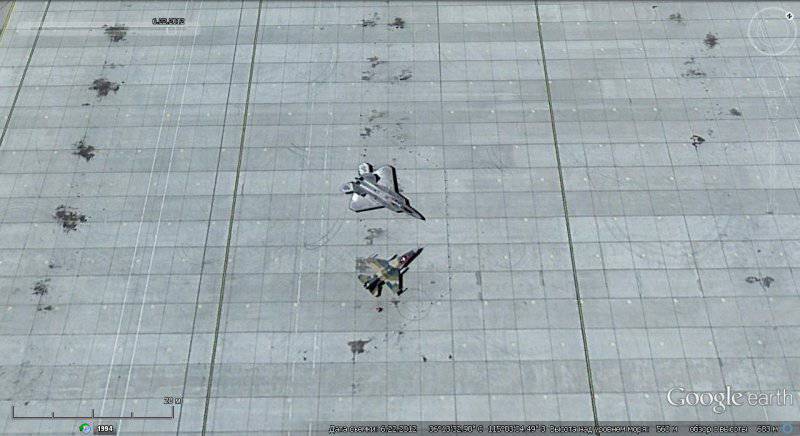 Earlier here for these purposes were used Soviet fighter MiG-21, MiG-23 and MiG-29. But due to difficulties in the supply of spare parts and the high cost of maintenance and upkeep, as well as due to the problems of ensuring flight safety, the US Air Force recently refused to use these machines on a permanent basis. 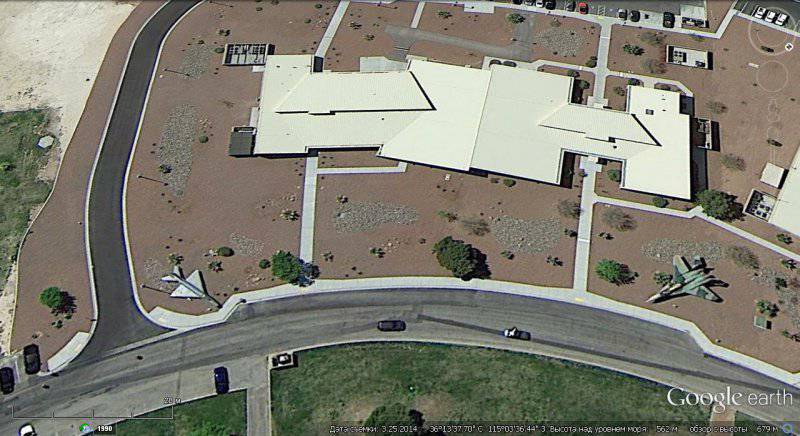 Satellite image of Google Earth: MiG-21 and MiG-29 fighters at the memorial site of the Nellis airbase

Also in Nevada is located Fallon airbase (Naval Air Station Fallon), which is the US Navy Combat Training Center. The well-known school of air combat of naval fighters - "Topgan" is also stationed here. 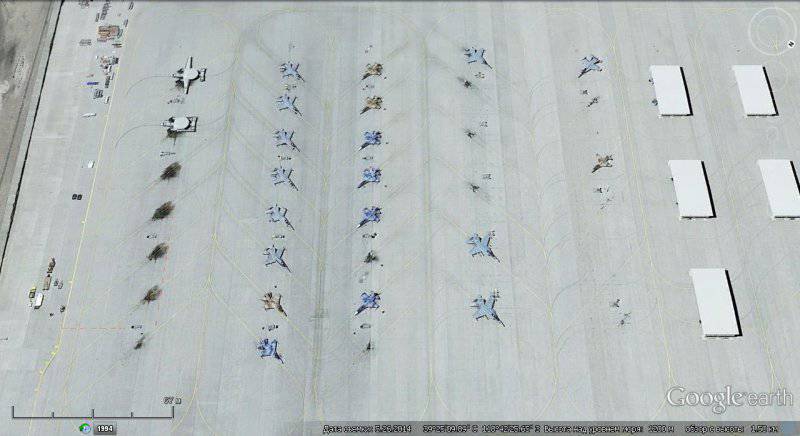 At present, the F-18 of the US Navy is most often “fought” against specially designed and painted F-5N and F-16N fighters.

Approximately in 50 km south-east of the airbase there is a landfill with a large target complex. The airstrip with parkings of target aircraft and model positions of the Soviet air defense missile systems were built here: C-75, C-125 and Krug. 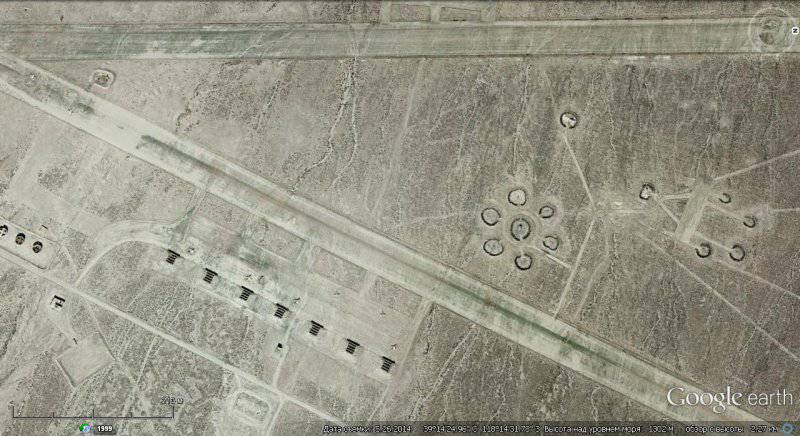 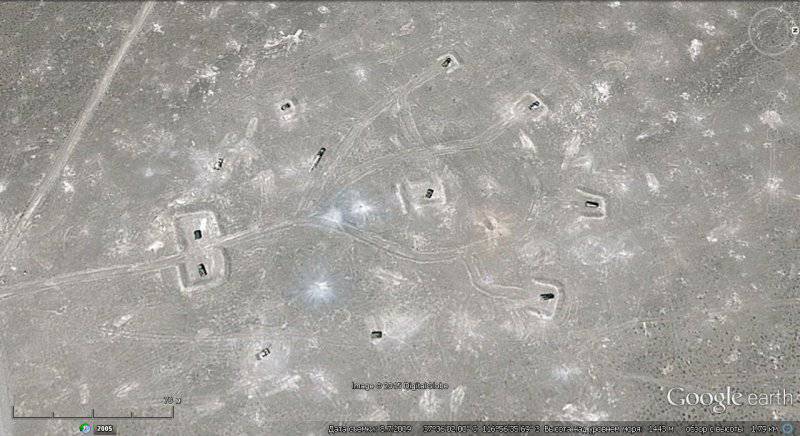 Satellite image of Google Earth: a layout of the positions of the Soviet air defense system C-125 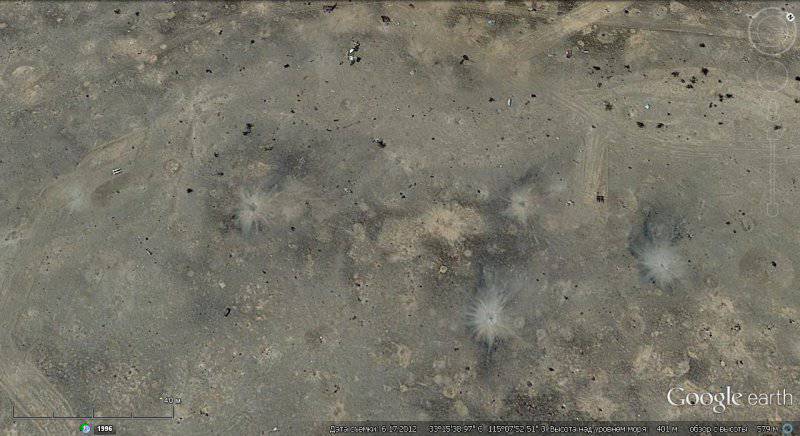 Satellite image of Google Earth: traces of gaps at the site in Nevada

In addition to the models of the Soviet anti-aircraft complexes, there are also active samples at test ranges in the USA. Of particular interest to the Americans were the C-300 family. 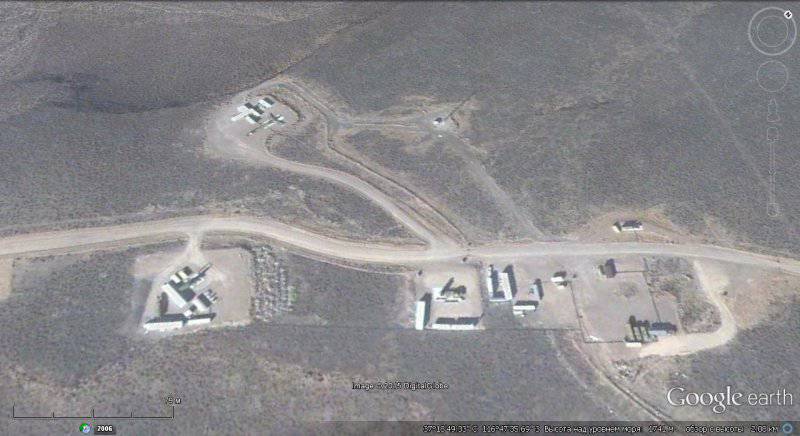 Satellite image of Google Earth: elements of the C-300PS air defense missile system at a US test site

At the beginning of the 90-s, through the Republic of Belarus, the USA managed to acquire elements of the S-300PS air defense system (adopted for use in the 1983 year) without missiles and launchers. Contrary to popular belief, the Americans did not seek to copy our complex. They were primarily interested in the characteristics of the radar and guidance stations, their noise immunity. In accordance with these parameters, American experts have developed recommendations on the organization of measures to counter our air defense system. 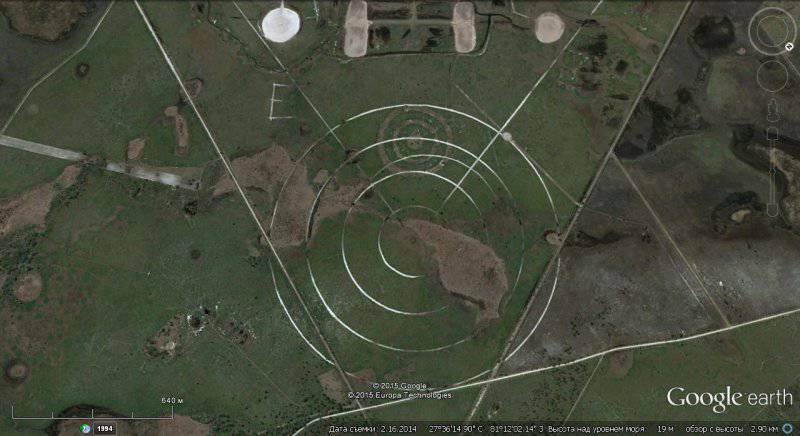 In addition to training air combat and combat air defense missiles, in the preparation of American pilots great attention is paid to the development of strikes on ground targets. 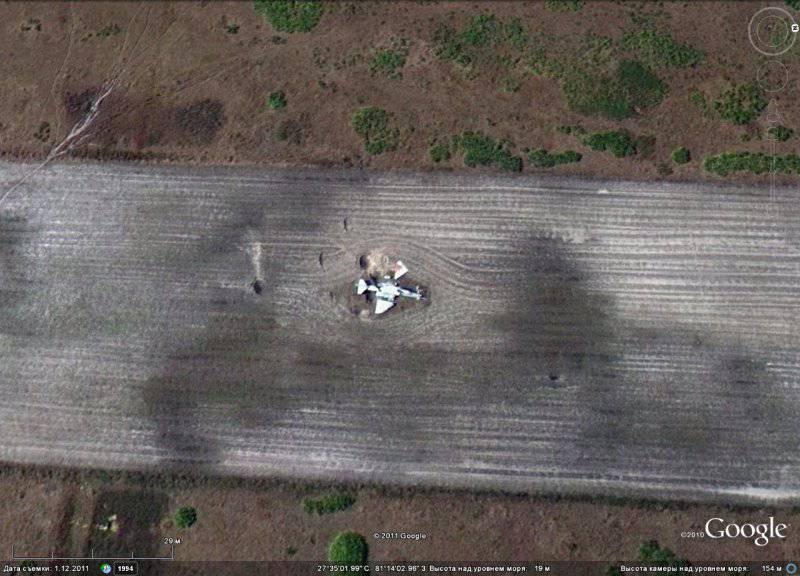 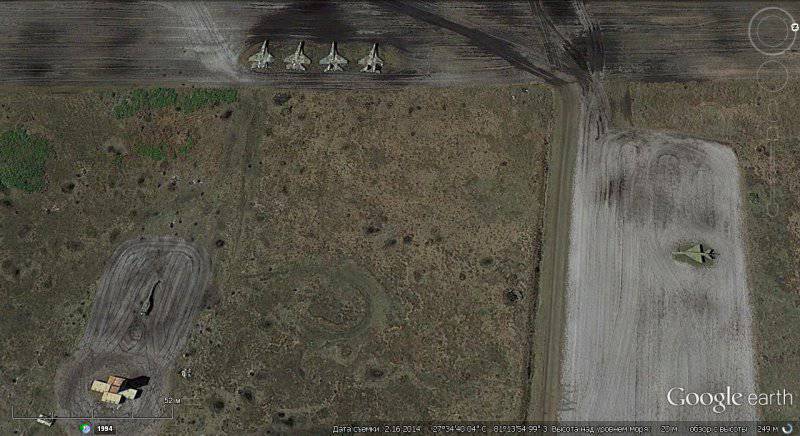 Not far from many of the air bases, there are sites equipped with decommissioned aircraft and armored vehicles, often of Soviet manufacture. 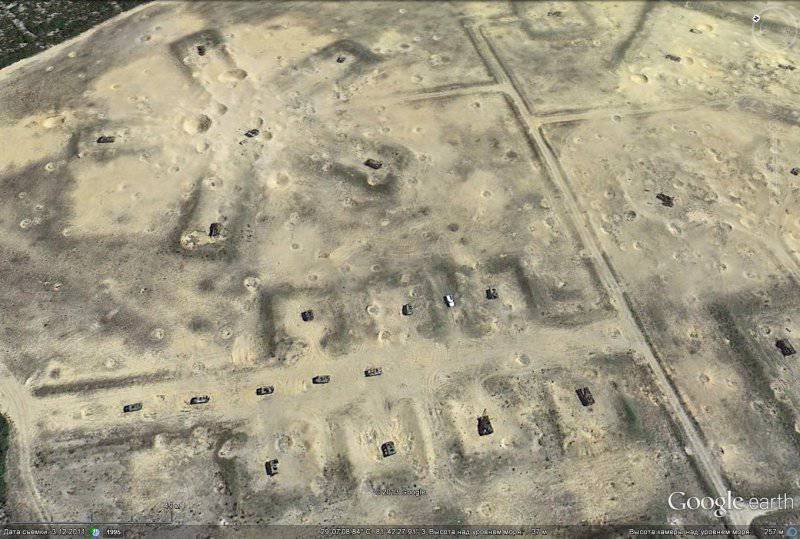 In total, the United States has a dozen operational aircraft test sites, which allows you to engage in regular combat training with the use of real means of destruction. 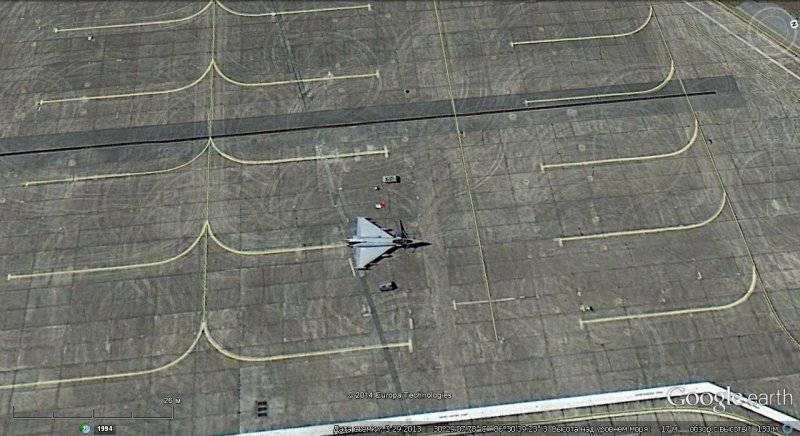 Much attention is also paid to the organization of joint exercises with other countries with the active involvement of foreign-made combat aircraft. This allows you to develop skills and techniques for conducting air combat with fighters that are not in service with the United States.

Based on:
http://geimint.blogspot.com
Satellite images courtesy of Google Earth.