February 2 2015
57
72 a year ago - 2 February 1943 of the year - ended one of the bloodiest battles in stories of mankind - the battle for Stalingrad, which established the understanding that for the Nazi invaders and the entire Third Reich, the countdown began. The units that opposed the Red Army on the banks of the Volga, including soldiers of the German, Romanian, Hungarian, Croatian, Italian and Finnish armies ("volunteer" detachments), were surrounded and defeated. For the great Stalingrad feat 125 fighters were awarded the title Hero of the Soviet Union. Four more Red Army men received the title of Hero of the Russian Federation for their military exploit in Stalingrad years after the great battle - already in the 90 and the beginning of the 2000. 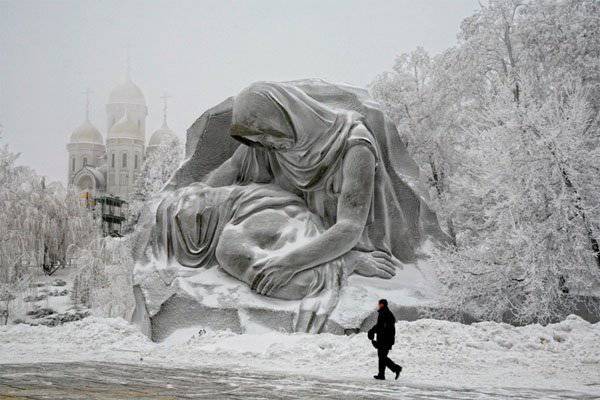 In Russia, February 2 received the official status of the Day of Military Glory on the basis of a presidential decree of the model 1995 of the year. On this day, Volgograd becomes the center of celebrations dedicated to the liberation of the city from the Nazi evil, aiming to make the Volga breakthrough and access to the oil-bearing regions of the Caucasus while simultaneously cutting off the south of the USSR from its central territories. The break of the Soviet infrastructure and access to Caucasian oil, according to Hitler, were to become the defining point of the future "victory" over the Soviet Union and instill confidence in the German fascist units, which the Red Army taught a stern lesson near Moscow.

However, the plans of the brown command were not destined to become a reality. Neither bravura talk that the enemy’s army was close to defeat, nor attempts to saturate the territories adjacent to Stalingrad with new and new units, nor the presence of thousands of artillery pieces, mortars, helped tanksself-propelled guns aviation, not a thousand award crosses from the "Fuhrer."

Turning the city into ruins, leading targeted bombardments and shelling not only of strategic infrastructure facilities, but also of the private sector, Hitler's heralds tried to report on the “fact of victory” on the Volga and transfer this “good news” to Berlin, where they once again ran ahead, broadcasting reports that the city is about to fall, or "has already fallen." 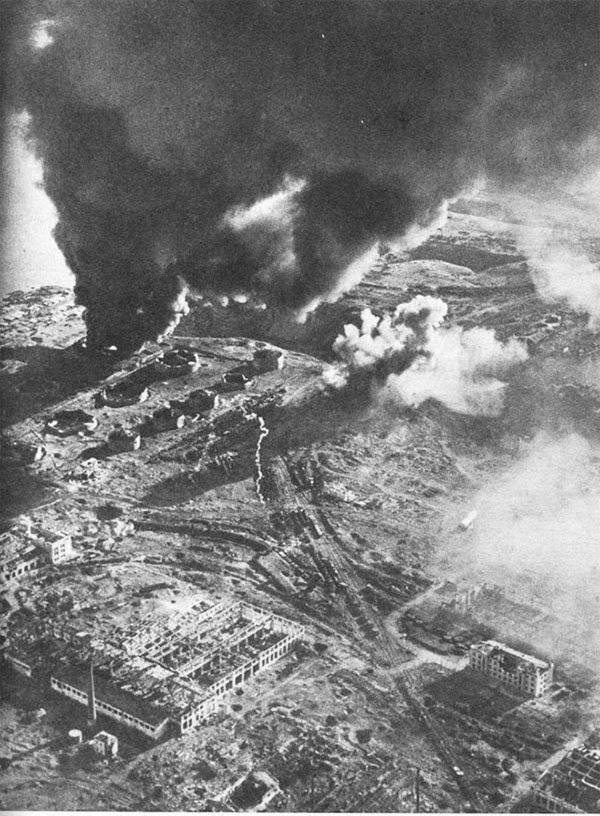 Naturally, no reports of the genocide of the local population, no reports of the atrocities of the Nazi soldiers and officers. Although such reports could not have appeared by definition, after all, the war itself against the Soviet Union was represented by the ideology of Nazism as a war of the "exclusive German nation against the Eastern barbarians-communists." Surprisingly, after decades in the Western press, materials can be found that during the Battle of Stalingrad from the Soviet side "the overwhelming majority of the Communists" died. What is it? Attempt to veil the fact of genocide, covering it with the fact that, say, the war was precisely with communism and its main followers? Based on the facts of today, when historical facts are misrepresented in order to diminish the role of the Soviet people in the liberation of the peoples of Europe from fascism, such publications look like links in the same chain.

In 2013, in the German edition Die junge welt material appeared under the title: "Die Kommunisten fielen überpropor im im Kampf”, Which can be translated as“ the Communists killed in the battle were many times more. ” That is, the newspaper deliberately focused on the deaths of the Communists, and the fact of the deaths of tens of thousands of civilians and ordinary fighters who had nothing to do with the party and its political slogans is consciously ignored. 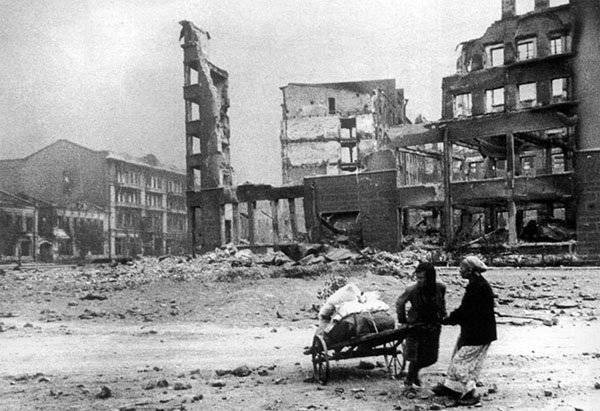 In the German press, the state’s press, which claims to condemn and will condemn Nazism, it’s not how the Nazi army actually wiped the city off the face of the Earth and led the systematic destruction of its inhabitants, but what kind of “German soldiers” experienced. At the same time, the soldiers of the Hitler army are no longer regarded as invaders of the Soviet lands, they are almost the main sufferers. The Germans are discussing the "woeful" letters of the soldiers of the Third Reich, in which there are words about the horrors of war, about the shelling from the Russians, about hunger, encirclement, but there is not a word about repentance, about the fact that they themselves stepped onto the banks of the Volga, pursuing outright misanthropic goals 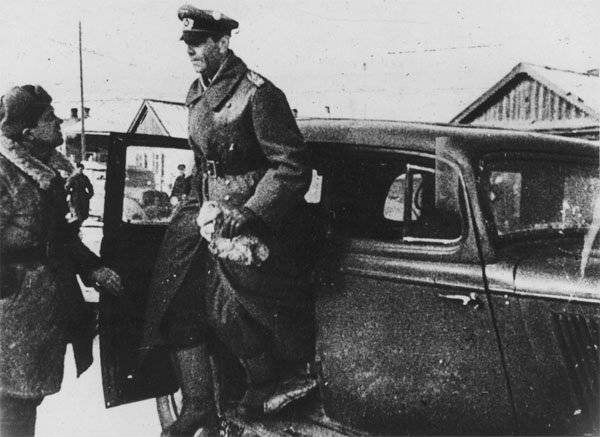 German publications present interviews with German citizens about their perception of the Battle of Stalingrad. In the overwhelming majority of cases, the Germans express words of pity for precisely those whom the Red Army defeated in Stalingrad. There are words of admiration for the courage of the Soviet people, but these words emphasize something like the following: “what else did Stalingradites who lived under the yoke of the communist regime still have?” This again speaks of an attempt to put an equal sign between Nazism and communism, and the Great Introduce the Patriotic War as the apogee of ideological confrontation and no more.

German engineer Thomas Edinger:
The battle of Stalingrad is like a black abyss to me. She swallowed a million boy soldiers.

An employee of the German clinic Eric Kleines:
My heart contracts when I imagine the nightmare of the soldiers sent to the eastern front. I read the memoirs of our officers who were stationed at Stalingrad. Painfully…

However, live witnesses of the Battle of Stalingrad and its participants remain in Germany. These people, who were themselves in the Stalingrad hell, warn modern Germans not to make sufferers from the representatives of the Wehrmacht army. From the interview of the interview correspondent "AIF" with the Wehrmacht soldier Dieter Birz, who participated in the storming of the Mamayev Kurgan.

Dieter Birz:
The Fuhrer ordered Stalingrad to be wiped off the face of the earth, and I saw how our planes bombed not only plants with train stations, but also schools, children's gardens, trains with refugees. (...) My colleagues, mad with anger, killed indiscriminately - the wounded and the prisoners. I was injured on September 15, I was taken to the rear. Lucky: I did not hit the Stalingrad cauldron. Until now, many historians in Germany differ in the estimates of Field Marshal Paulus, who "surrendered" the Sixth Army. I think Paulus was wrong about one thing: you had to fold weapon 19 November 1942 of the year when his group was surrounded. Then he would save the lives of hundreds of thousands of soldiers.

However, this opinion today is rather an exception. In a fashion of juggling the facts and twisting the history of the Second World War. The perversion of the actual course of military history fertilizes the soil for the growth of neo-fascist ideology. Our task - the task of the descendants of the warriors who fell in the battles of the Great Patriotic War - to do everything so that the memory of the war and the atrocities of the Nazi invaders, did not give the misanthropic ideas a single chance. 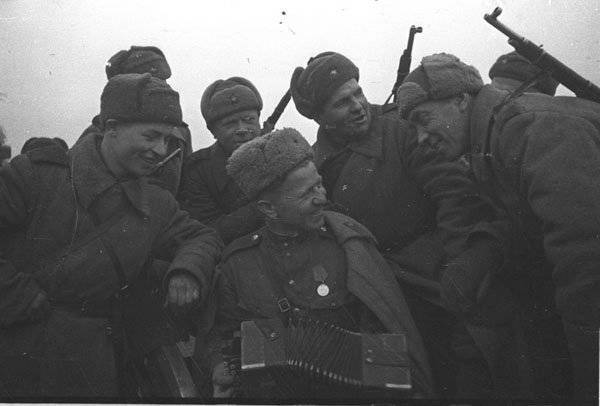 Eternal memory to those who defended Stalingrad, defended the Fatherland!

Ctrl Enter
Noticed oshЫbku Highlight text and press. Ctrl + Enter
We are
Day of Military Glory of Russia - the day the counter offensive began in the Battle of Moscow"Stalingrad" unprofessional gaze
Military Reviewin Yandex News
Military Reviewin Google News
57 comments
Information
Dear reader, to leave comments on the publication, you must to register.