Turkey is ready to launch an invasion of Iraq 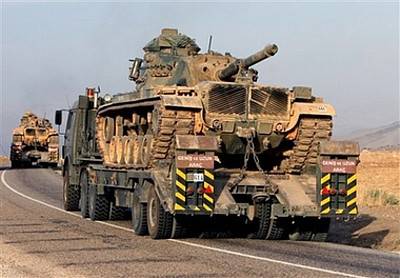 The Turkish army is ready to invade the northern provinces of Iraq at any time, Lenta.ru reports on Tuesday, September 13.


A statement was made by Turkish Minister of Internal Affairs Idris Naim Sahin. According to him, artillery and aviation For several days now they have been massively attacking the positions of Kurdish militants entrenched in the poorly managed northern provinces of Iraq. “The ground operation can begin at any time,” the minister said.

At the same time, Sahin noted that the final decision will be made after consultations with Iraqi officials.

During the talks, representatives of Ankara will try to convince Baghdad that the defeat of the bases of Kurdish militants will benefit not only Turkey, but also Iraq itself. However, even if the Iraqi government does not agree, it will have little effect on the situation.

According to Turkish observers, the operation may begin even before the return of Prime Minister Recep Erdogan from Egypt.
Ctrl Enter

We are in Yandex Zen
Reports from the militia of New Russia for 27-28 September 2014 of the year
Iraq acquired Su-25 attack aircraft from the strategic reserve of the Russian Defense Ministry
3 comments
Information
Dear reader, to leave comments on the publication, you must to register.