Modern adjustable bombs (CAB) of the USA and Russia

October 12 2013
18
Adjustable aviation bombs (KAB), which are often referred to in English literature smart bomb (smart bombs) - this is one of the types of guided aviation means of destruction of ground targets. CAB - are aerial bombs equipped with a guidance and control system. It is worth noting that the most important characteristic of aviation ammunition is the ratio of the mass of explosive to the total mass of the bomb / missile. For aircraft missiles, this figure ranges from 0,2 to 0,5 (such a low ratio is explained by the placement of the engine, fuel tanks, correction systems in the rocket), for uncontrolled aerial bombs this figure approaches one, for CAB it is 0,7-0,9. With almost the same mass and launch range (in comparison with the rocket), the adjusted bombs can carry much more explosives.

We begin our story about modern precision weapons with the American SDB (Small Diameter Bomb) bombs. The bomb is presented in two main varieties of GBU-39 and GBU-40. This KAB is capable of hitting reinforced concrete hangars and bunkers by punching their walls. The design of the bomb has folding wings in flight, which can significantly increase the range of destruction of targets. The bomb has been in service with the US Army since September 2006. The most modern American fighter 5-th generation F-22A Raptor is able to place on a special suspension and 8 bombs of a similar class.

The first was the SDB I (GBU-39) bombing the US Army. Its weight is rather small, only 130 kg., Diameter is about 190 mm., Length is about 1,8 m. Compared to ammunition from the Second World War, we can note a relatively small weight and diameter with a significantly increased bomb length. This bomb is able to accurately hit various targets - its circular probable deviation (diameter of a circle, in which half of the bomb is guaranteed) is 5-8 m. Such accuracy is achieved using an onboard control system with inertial channels and GPS. Inertial channels are able to ensure operation in conditions of intense electronic suppression by the enemy. All this is done in order to deliver 17 kg. high blasting explosives exactly to the target. Taxpayer such a "toy" costs 70 thousand dollars per copy (a pair of average annual salaries in the United States). 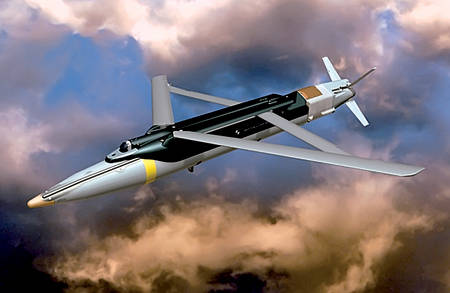 SDB GBU-39
Most likely, an ordinary person with a liberal arts education, at the sight of such a cost, would have rushed to stigmatize the Pentagon and all its contractors with iron. But everything is relative, because, as you know, a simple man in the street does not acquire bombs on wages. A delivery of ammunition to the goal of aviation. SDB class bombs can be used on the following aircraft: B-52 Stratofortress bombers, B-1 Lancer, B-2 Spirit, F-15E Strike Eagle, F-16 Fighting Falcon, F-22 Raptor, F-35 Lightning II, and also the A-10 Thunderbolt II attack aircraft. If we drop the cars of the first generation from here and take a look at the prices of the newest aircraft, everything will fall into place. So the cost of the B-2 Spirit bomber, made using stealth technology, is a little over 1 billion dollars apiece (excluding R & D). And the unobtrusive air superiority fighter F-22 Raptor, belonging to the 5 generation, is estimated at 137,5 million dollars for a serial copy of the 2008 of the year. The cost of the F-35 Lightning II fighter-bomber starts from 83 million for the cheapest modification. Compared to these astronomical prices, the cost of an SDB bomb looks just penny.

The SDB GBU-39 bomb is planning. She approaches the goal with folded wings. The bomb can be laid on a special pallet BRU-61 / A, which accommodates 4 such CAB. Bomb's place on the site of the bomb hole is occupied by exactly one such “pack of four”. After dumping the pallet, its pneumatics throws away the bombs, they spread the wings laid along the hull using a special mechanism, straighten the rudders that open in the stern (the control system is also located there) and begin to be outputted to a predetermined target. To the goal of such a bomb is planning. In this case, the distance of its dropping to the object of destruction can reach up to 110 km. This range is designed to minimize the risk of meeting the monstrously expensive aircraft (fighters, bombers) with the enemy's air defense system. The farther away the planes are from the air defense systems, the more efficiently the stealth technology implemented in their construction is implemented, and you can’t get under the fire of conventional air defense artillery, visually induced.

Fighter 5-th generation F-22 Raptor, having a supersonic cruising speed, able to drop these bombs and on it. In this case, the SDB can fly even further due to the increased lifting force of the wings and flying along a higher trajectory. Reaching the goal, the bomb can behave differently. Switching from the cockpit of the aircraft fuse can operate in several modes - the traditional contact, the explosion with a slowdown and an air explosion. The fact that a bomb has a slowdown explosion mode explains the fact that SDB has less explosives than older bombs and its modern counterparts. The fact is that approximately 70 kg. its mass falls on a high-strength body, which acts as a projectile and allows the bomb to go a whole meter deep into concrete reinforced with steel rods. 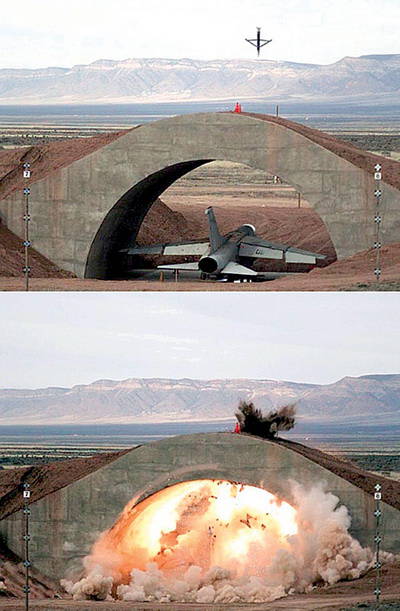 GBU-39 strikes attack aircraft in closed caponier
Adjustable aerial bomb SDB-I can only hit stationary targets. It has already been tested during military operations in Iraq and Afghanistan. The next generation of these weapons, the SDB-II or GBU-40, has in its design a target recognition system and a thermal imaging sensor. Their presence allows the KAB to hit Tanks and other ground equipment. The price of this variety is near the mark of 90 thousand dollars apiece.

Not so long ago, Russia presented the most compact in its class KAB-250 aerial bomb, produced by State Scientific Production Enterprise “Region”. This adjustable bomb has all the characteristic features of traditional unguided bombs and, most likely, has a TV guidance system. The diameter of the bomb is 225 mm., Length 3,2 m., Weight 250 kg. Of these, 127 kg. accounted for by the weight of the explosive. This adjustable aerial bomb can be placed both on the external sling and in the internal compartments of fighter-bombers.

This bomb was presented at the MAKS-2011 air show in August. It is worth noting that its developer GNPP Region did not provide any detailed information about this sample, so that a simple man in the street can only guess about the effectiveness of this device. Despite this, it can be assumed that the KAB-250 has a combined satellite and laser semi-active guidance system. Also noteworthy is the characteristic elongated shape of the body of the new bomb, which is most likely optimized for the internal compartments of the 5-generation aircraft PAK FA.

The previously adjusted air bombs in Russia also strike surface and submarine targets. For example, the Kaban Zagon-1 is able to hit enemy submarines at depths of up to 150 meters and waves in the sea with 6 points. This bomb is used primarily in bays, fjords, other areas in which the use of other guided weapons is difficult. When used against underwater targets, a bomb is dropped on a parachute. At that moment, when the bomb touches the surface, it is separated from it, plunges and moves to the target due to gravity, the presence of a motion control system and an active hydroacoustic direction finding of underwater targets. According to the SNNP "Region", the Kab "Zagon-1" is unified for use on anti-submarine aircraft Il-38 and Tu-142МЕ, as well as for Ka-28 helicopters. 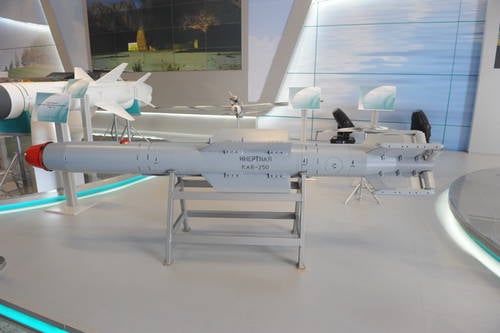 CAB-250
It is worth noting that domestic aerial bombs are very attractive by the criterion of "cost-effectiveness", easy to manufacture and unpretentious in operation. The CABs manufactured today in Russia do not require any special maintenance and control.

In conclusion, it can be noted that it is rather foolish and useless to directly compare modern Russian and American KAB directly. Too different is the device. The American SDB KAB is, in fact, a rocket-projectile without an engine, which is able to cover a considerable distance through planning. Its main purpose is to defeat bunkers, command posts, buildings, by breaking through walls and an internal explosion. In turn, Russian ammunition is traditionally cheaper and more to the usual air bombs. At the same time, they have a significantly greater warhead weight and a significantly smaller radius of use (US SDB to 110 km. From target, Russian KAB-500 to 9 km.).