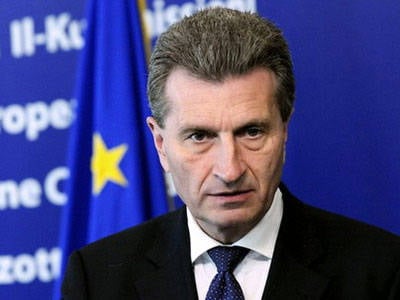 The European Union (EU) asks the Russian Federation not to interfere with the implementation of the Nabucco gas transmission project (this is an 3300 km gas pipeline from Turkmenistan and Azerbaijan to EU countries). The European Commissioner for Energy, Günther Oettinger, made a statement on this, Deutsche Welle reported. The European Union advises Russia not to try to hinder the Nabucco project with the help of its “expensive gas pipeline” South Stream.


The European Commissioner recalled that the Nabucco gas pipeline, along with other smaller projects - the Trans-Adriatic Gas Pipeline (TAP), the Turkey-Greece-Italy Interconnector (ITGI) project, is part of the Southern Corridor system. These projects provide for the supply of natural gas through the already existing transport systems of Turkey, but they also require a number of innovations, for example, laying of new underwater and land gas pipelines. Gunter Oettinger said that the main strategic issues for the Southern Corridor will be resolved by the end of 2011. He said that the EU’s access to the Caspian region and Central Asia, where the world's largest natural gas reserves, which exceed even Russian ones, are found, is a key issue for Europe.

According to Ottinger, Moscow should be interested in both Nabucco and its alternatives - TAP and ITGI. The European Commissioner for Energy believes that Russia should come to terms with the fact that the Southern Corridor is inevitable. But Baku and Ashgabat "have the right to make independent decisions."

At the same time, Ottinger noted that if the Russians “try to put a speck on the wheels” of the Nabucco project technically, building their South Stream gas pipeline, or politically, putting pressure on Azerbaijan and Turkmenistan, he will personally “have less trust in long-term gas contracts and less to believe in the thesis that gas is not a political instrument for Russia. ”

The EU gave the European Commission a mandate to hold talks between Baku and Ashgabat to determine the legal basis for the Nabucco gas transmission project. This is stated in the document “External Energy Relations of the European Union”, which was adopted by the European Commission. He was introduced by EU Commissioner for Energy Affairs, Günther Oettinger. The document notes that the agreement between the European Union, Azerbaijan and Turkmenistan regarding the Nabucco project will lay the foundation for the construction of infrastructure. And it will ensure the transportation of natural gas from Turkmenistan across the Caspian Sea.

The Nabucco Consortium, which includes the following companies: OMV Gas GmbH (Austria), BOTAŞ (Turkey), Bulgargaz (Bulgaria), SNTGN Transgaz SA (Romania), MOL Natural Gas Transmission Company Ltd. (Hungary), RWE AG (Germany), welcomed the EU’s decision to obtain a mandate for the European Commission to conduct negotiations between Turkmenistan and Azerbaijan regarding the legal basis of the Trans-Caspian gas pipeline (TCG). Speaking about this event, Nabucco's managing director, Reinhard Mitschek, said that there is significant potential on both sides of the Caspian Sea for the export of natural gas, which is strategically important for the future of Turkish and European gas markets.

It is necessary to take into account the fact that the Caspian Sea zone has become a region where countries are actively engaged in military construction. Azerbaijan, Kazakhstan, Turkmenistan, Iran are quite actively strengthening their Navy in the Caspian. Yes, and Moscow announced plans to strengthen the Caspian flotilla. And, apparently, not in vain. The struggle for natural resources often flows from the legal, political field to "gunboat diplomacy."

We are in Yandex Zen
Turkey and Greece. Cold War airspace
Russia: between Qatar and Nabucco
16 comments
Information
Dear reader, to leave comments on the publication, you must to register.