January 29 2015
13
24 January 1978, the satellite "Cosmos-954", owned by the USSR and having a nuclear power plant on board, collapsed in the Earth's atmosphere. Its fragments fell over the northern part of Canada. The incident caused a serious international scandal, but this case was not the first and far from the last in world practice. A number of such "tricks" thrown out and the United States. In addition to incidents with "nuclear satellites", both superpowers in the 20th century managed to conduct a series of nuclear tests in space.

Some of the most significant and numerous actions that jeopardized not only the environmental safety on the planet, but also the safety of space programs, are inextricably linked with the attempts to develop an anti-satellite weapons. The first to go this way the Americans. 27 August 1958 for the first time in stories US fired a cosmic nuclear explosion. At an altitude of 161 km, a nuclear charge of 1,7 kt was detonated. The charge was delivered to this height with the X-17A rocket, which was launched from the board of the American warship AVM-1 Norton Sound.

Even then it became obvious that such a small nuclear charge is not able to pose a significant threat to satellites. For defeat required precision guidance, which the United States at that time simply did not have. Therefore, the obvious solution was to increase the power of used combat units and launching rockets higher and higher. The record in this series of tests, which received the code name Argus, was an explosion that was carried out at an altitude of approximately 750 km. The result achieved with this is the formation of narrow artificial radiation belts around our planet. 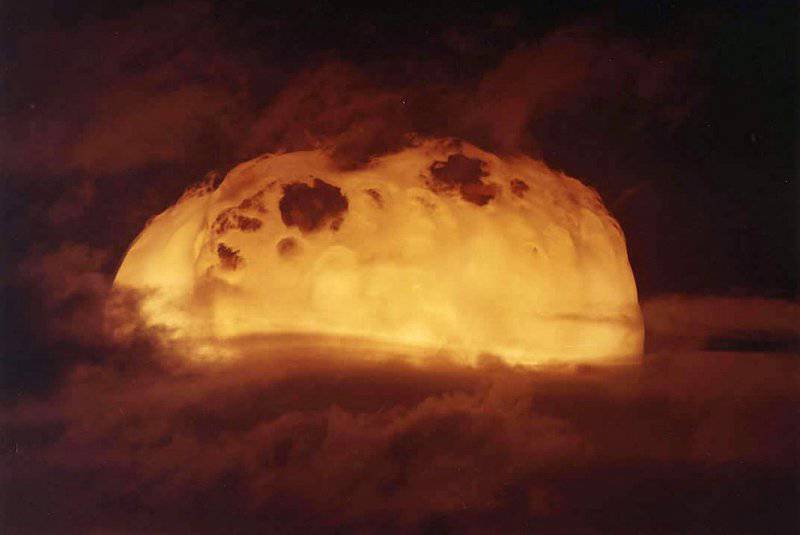 The explosions in space could go on and on, but they were temporarily suspended by a moratorium on nuclear testing. True, it did not last long. Here the first "expressed" the USSR. In order to study the effect of nuclear explosions in space on the work of the electronic equipment of the missile defense system, a series of nuclear tests was conducted. Since October 27 1961 from the Kapustin Yar test site, two launches of P-12 ballistic missiles carrying charges of 1,2 kt were carried out. These missiles exploded over the Sary-Shagan test site at altitudes of 150 and 300 km, respectively.

The response of the US military in the form of the Starfish Prime project implementation can be without exaggeration attributed to the actions of an “elephant in a china shop”. 9 July 1962, at an altitude of about 400 km, was carried out the most powerful explosion in space, the power of the used thermonuclear Thor missile warhead was 1,4 Mt. The rocket was launched from the atoll of Johnson. 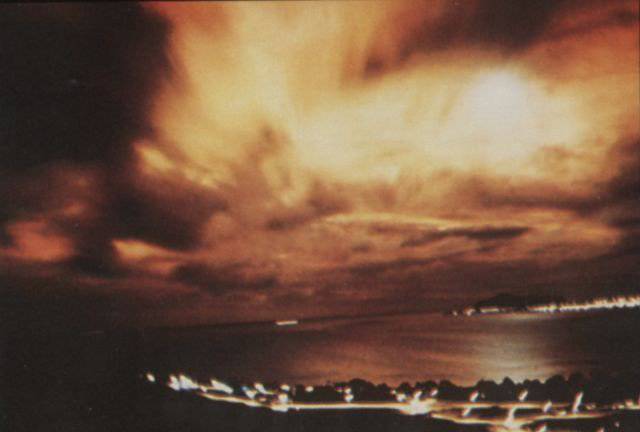 The glow observed from Honolulu during Starfish Prime trials

A powerful explosion also affected the work of spacecraft in earth orbit. So, satellite 3 were immediately disabled by the resulting electromagnetic pulse. The charged particles that were formed as a result of the explosion were captured by the magnetosphere of our planet, as a result of which their concentration in the radiation belt of the planet grew by about 2-3 order. The impact of the resulting radiation belt caused a very rapid degradation of electronics and solar cells from 7 satellites, including Telestar-1, the first commercial telecommunications satellite. In total, as a result of this explosion, a third of all spacecraft that were in low near-earth orbits were destroyed during the explosion.

The radiation belt formed as a result of the implementation of the Starfish Prime project caused the countries to adjust the parameters of manned launches within the Rise and Mercury programs for two years. If we talk about achieving the main goal of the experiment, then this goal was more than fulfilled. A third of the satellites available at that time, located in low-Earth orbit, both American and Soviet, were decommissioned. The result was the recognition that such an indiscriminate means of defeat could cause significant damage to the states themselves.

The explosion provoked a very loud political scandal drowned out by the Caribbean crisis. In the end, a moratorium on nuclear explosions in space was introduced in the world. In total, during the 1950-60 period, the United States managed to conduct 9 of such nuclear tests, in the Soviet Union - 5 tests. 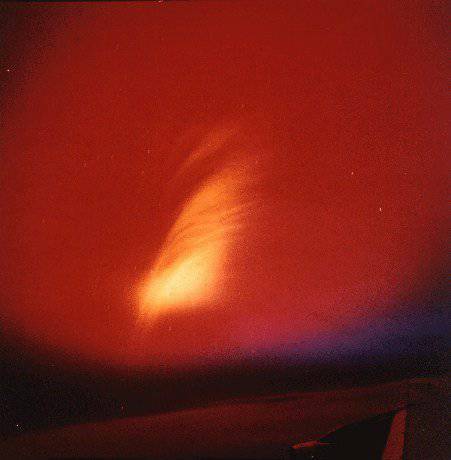 View of the glow from the aircraft KC-135

Reactor from the sky

Quite serious international scandals were brought not only by nuclear tests in outer space, but also by accidents that posed a threat not only to the environment, but also to citizens of any country who could be in the wrong place at the wrong time. Since the beginning of 1970, the USSR has been developing and deploying a maritime space reconnaissance and target designation system, dubbed “Legend”. This system consisted of two groups of satellites - active and passive reconnaissance. For the normal functioning of active reconnaissance, constant high power supply was required.

In this regard, the satellites decided to install airborne nuclear power reactors. At the same time, the resource of one such satellite was estimated at 1080 hours, which was determined by quite frequent correction of the satellite position in orbit and the development of fuel reserves. At the same time, the onboard reactor continued its work. In order not to dump such “gifts” to the Earth, the satellites brought to the so-called “burial orbit” at an altitude of about 1000 km. According to calculations, satellites should be in the orbit of the order of 250 years.

At the same time, the operation of such satellites was often accompanied by abnormal situations. So, in January 1978, the Kosmos-954 reconnaissance satellite, equipped with an onboard reactor, completely failed and became uncontrollable. Attempts to regain control of it and bring it into "burial orbit" led nowhere. Began the process of uncontrolled reduction of the spacecraft. The satellite became known to the NORAD North American Air Defense Joint Command. Over time, information about the threat posed by the “Russian satellite-killer” was leaked to the Western press. All with horror began to wonder where exactly this “gift” would fall to the ground.

24 January 1978, the Soviet reconnaissance satellite collapsed over the territory of Canada, and its radioactive debris fell over the province of Alberta, which was sparsely populated. In total, Canadians discovered about 100 fragments of a total weight of 65 kg in the form of disks, rods, tubes, and smaller parts; some of the radioactivity was 200 X-rays / hour. By happy coincidence, none of the local residents was hurt, as they practically did not exist in this region. Despite the slight radioactive contamination found on Earth, the USSR was forced to pay Canada compensation. 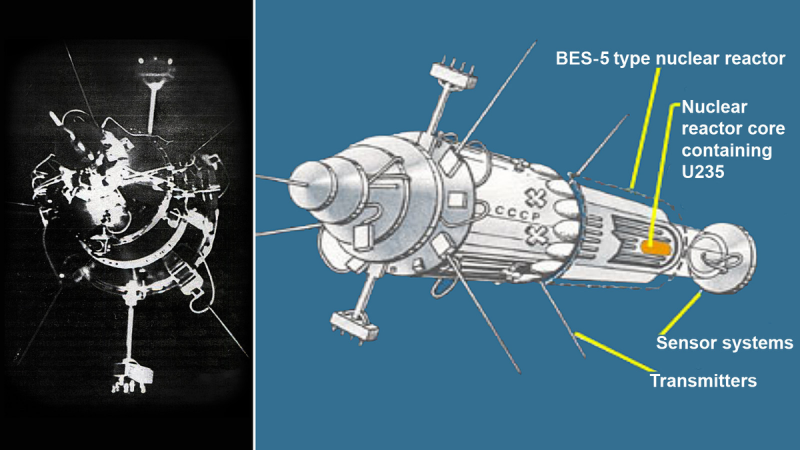 At the same time, as soon as it became clear that the Soviet reconnaissance satellite would fall in North America, the headquarters of the CIA began an active study of the operation under the code name "Morning Light". The American side was interested in any data related to a secret Soviet satellite - design solutions, materials used, data transmission and processing systems, etc.

They led the operation in Langley, but representatives of the American took an active part in it. naval intelligence, units of the Department of Defense of Canada, employees of the US Department of Energy. Fortunately, the Canadian and American cities were not threatened by a radiation disaster, for this reason the special services of the two countries worked in a fairly calm environment. They stayed in the Canadian tundra until October 1978, after which, having collected everything they could find on the spot, they returned back.

After the Canadian territory was “cleared” of radioactive debris, Pierre Trudeau, who holds the post of prime minister of the country, billed the Soviet side for the work on decontamination of the area - 15 million dollars. The Navy of the USSR, to which the satellite that fell in Canada belonged, had to pay the bill. However, the financial wrangling of the two countries dragged on for a long time and ended up with the fact that the Soviet Union did partially pay the invoice. It is still unknown exactly what amount transferred to Canadians, the numbers range from 3 to 7,5 million dollars.

In any case, neither the Canadians nor the Americans did not remain in debt. All fragments of a secret military satellite collected on the ground fell into their hands. Although the main value were only remnants of semiconductor batteries and beryllium reflector. In all likelihood, it was the most expensive radioactive trash in human history. As a result of an international scandal that broke out after the fall of the satellite, the USSR suspended the launches of such vehicles for three years, working to improve their security.

Accidents involving satellites with a nuclear power plant on board

21 April 1964 failed to launch the US-owned Transit-5В navigation satellite. The satellite was equipped with SNAP-9A nuclear power plant. This installation contained 950 grams of radioactive plutonium-238, which was dispersed in the Earth’s atmosphere as a result of the accident. This accident has caused an increase in the level of natural background radiation throughout our planet.

18 May 1968 of the year at the launch site crashed an American carrier rocket, Tor-Agena-D. ” This rocket was to put into orbit of the Earth a new meteorological satellite "Nimbus-V", equipped with a nuclear power plant SNAP-19B2. Happiness was the fact that the design of the device has shown the proper strength. The satellite withstood all peripetias of flight and did not collapse. Later, he was caught by the US Navy, radioactive contamination of the oceans is not followed.

25 April 1973 failed to launch the next reconnaissance satellite equipped with a nuclear power plant and owned by the USSR. Due to the failure of the pre-razgona engine, the satellite was not placed into the calculated launch orbit, and the nuclear installation of the device fell into the Pacific Ocean. 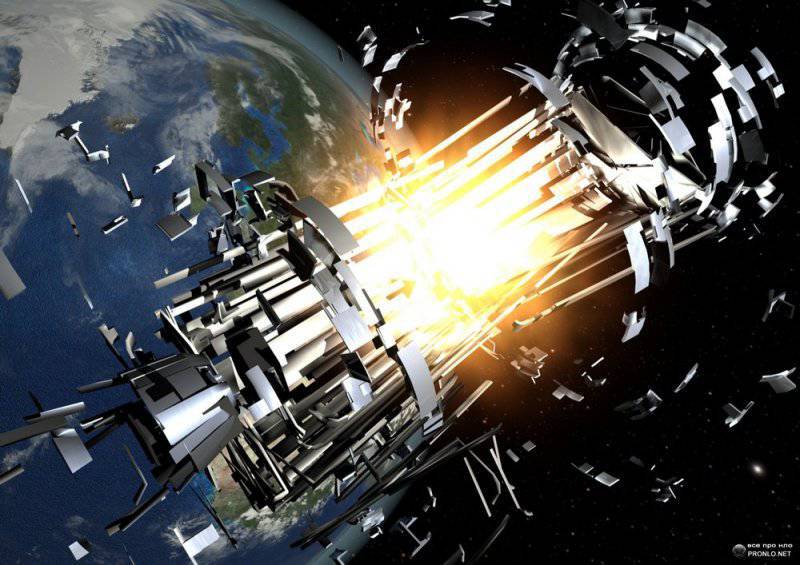 12 December 1975 almost immediately after it reached Earth orbit, the orientation system of another Soviet Kosmos-785 reconnaissance satellite equipped with a nuclear power plant broke down. The chaotic movements of the satellite in orbit began, which could cause its subsequent fall to Earth. Understanding this, the reactor core was urgently separated from the satellite and transferred to the “burial” orbit, where it is located at present.

24 January 1978 in the north-western regions of Canada fell fragments of the Soviet reconnaissance satellite "Kosmos-954", equipped with a nuclear power plant. When the satellite passed through the dense layers of the earth’s atmosphere, it collapsed; as a result, only its fragments reached the earth’s surface. At the same time, minor radioactive contamination of the surface was recorded, which, as mentioned above, led to a serious international scandal.

28 on April 1981 of the year on another reconnaissance Soviet satellite "Kosmos-1266", which has a nuclear power plant, a malfunction of onboard equipment occurred. On an emergency basis, the reactor compartment was separated from the satellite, which was “abandoned” into the “burial” orbit.

February 7 In the desert regions of the South Atlantic, another Soviet reconnaissance satellite, Kosmos-1983, also equipped with a nuclear power plant, fell. The modifications made to its design, which were based on previous accidents, made it possible to separate the active zone from the heat-resistant reactor vessel and prevent a compact fall of satellite fragments to Earth. However, as a result of this accident, an insignificant increase in the natural background radiation was recorded.

In April, the 1988 of the year went out of control next Soviet reconnaissance satellite "Kosmos-1900", which has a nuclear power plant. The spacecraft slowly lost height, approaching the earth's surface. To monitor the position of the Soviet satellite were connected to the US space control service. Only 30 of September 1988 of the year a few days before the satellite could enter the Earth’s atmosphere, its protective system turned on, and the spacecraft was placed into a safe stationary orbit.