Interstellar: on the way to the stars 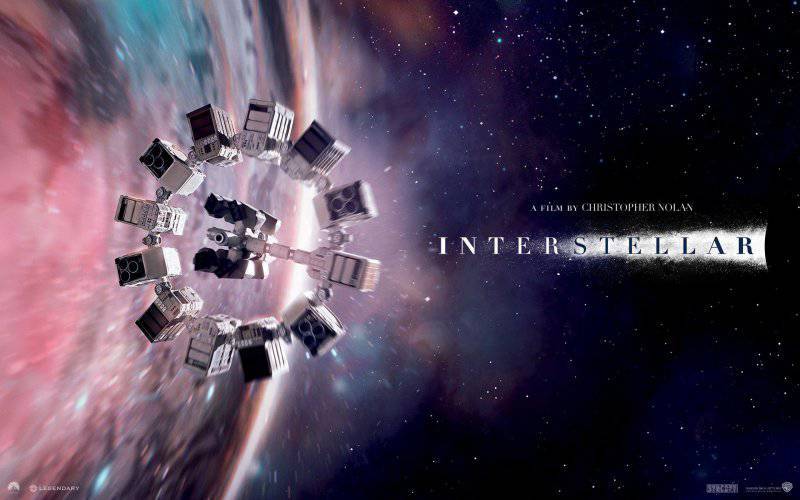 Where, behind the stern, the solar wind subsides and eternity rises next to us ... What awaits those who were able to break through the heliopause and touch the light of distant stars? Ghostly shine of Kuiper belt particles. Decades of flight without the possibility of replacing failing units. Attempts to establish communications with the Earth from astronomical units at a distance of 200.

Will it be possible to take such distant frontiers with modern technologies? Fly to where the radio signals come from a delay per day? Even light passes before a huge distance, but the human mind goes forward.

30 billion kilometers. 70 years of flight when using existing accelerating blocks with LRE. Modern interplanetary stations are not designed for such expeditions. After three or four decades, the radioisotope battery dies. The supply of hydrazine in AMC orientation engines ends. Communication is disconnected, and the probe, asleep forever, is dissolved in an infinite space.

To date, mankind has managed to build six "starships", exceeding the third cosmic velocity and leaving the solar system forever.

Here are the names of the characters.

Automatic interplanetary stations of the “Pioneer” series under the number 10 and 11. Launched in 1972-73. “Pioneers” reached the area of ​​outer planets, first transmitting to Earth photographs and scientific data from the environs of Jupiter and Saturn. Having made a maneuver in the gravitational field of the giant planets, they forever left the region of the ecliptic and entered into an unequal battle with space and time.

Communication with “Pioneer-11” was interrupted in 1995, when he was already far beyond the orbit of Pluto. By now, the probe has left the Sun on 90 a.e. and continues on its way towards the constellation of Shield. 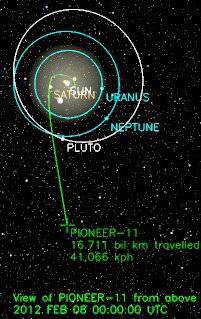 His twin lasted exactly thirty years in outer space: the latest scientific data from the “Pioneer 10” were transmitted to Earth in the 2002 year. According to calculations, in 2012, he should have been in 100 a.e. from the sun. Asleep forever probe with a gold plate on the board flies in the direction of Alpha Taurus. Estimated time of arrival - 2 000 000 year AD

The following heroes are participants of the stunning mission “Voyager”, the largest expedition of all time interplanetary flights. Two probes hit the road in the distant 1977 year, hoping to visit the environs of all outer planets. The main mission of the Voyagers ended in complete triumph: the probes studied Jupiter, Saturn, Uranus, Neptune from the flight trajectory, their rings, and also 48 satellites of the giant planets. At the time of passing over the upper cloud layer of Neptune, after 12 years of flight and 4 billion km of the path traveled, the deviation of the “Voyager-2” from the calculated trajectory was incredible 200 meters! 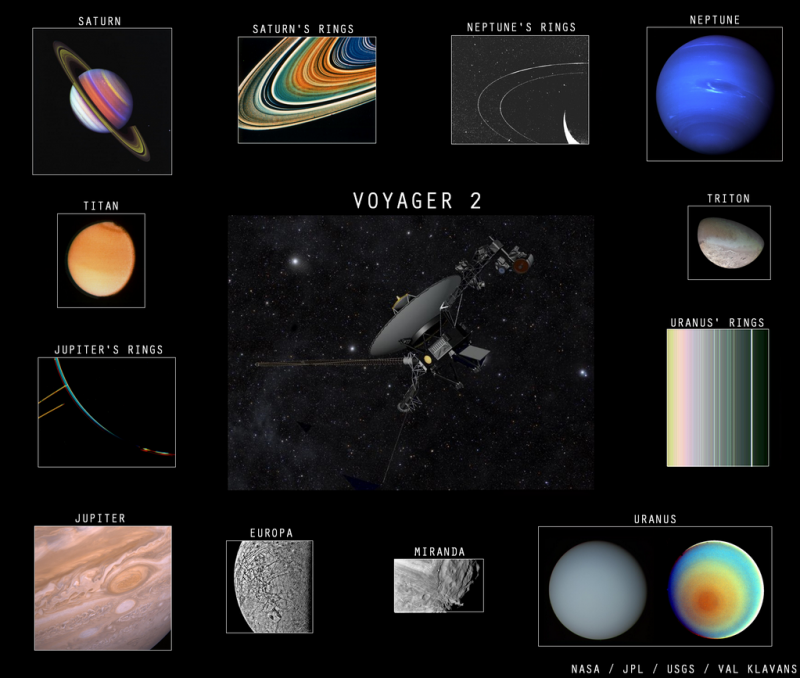 Today, after 37 years after their launch, they continue their journey in the interstellar ocean, moving away from Earth at a distance of 107 and 130 a.e. Radio signal delay from “Voyager 1” - 17 hours 36 minutes. The transmitter power is only 26 W, but its signals still reach the Earth.

The memory capacity of the onboard computer “Voyagers” is 100 times smaller than that of a modern mp3 player. The unique retro equipment continues its work, through the whirlwinds of electromagnetic storms and dozens of years of work in open space. Several liters of precious hydrazine remained in the tanks, and the power of the radioisotope generator still reaches 270 W. Already beyond the orbit of Neptune, NASA programmers managed to “reflash” the Voyager on-board computer: now the probe data is encoded with the highly secure dual Reed-Solomon code (it is curious that during the launch of Voyagers, this code has not yet been used in practice). By the beginning of the new century, the probes had switched to the backup engine set of the orientation system (the main set had already made 353 thousand corrections by that time), but the sun sensor is finding it harder to find its dim light against the background of thousands of bright stars every day. There is a risk of loss of orientation and loss of communication with the Earth. 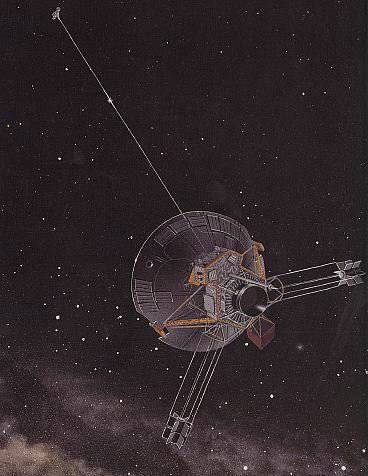 In the summer of 2012, the equipment of “Voyager-1” registered a sharp drop in the intensity of charged particles of the solar wind - the probe crossed the boundary of the solar system, having gotten out of the heliosphere. Now the probe signals are distorted by a new, never-before-recorded sound - the plasma of the interstellar medium.

For the ninth year, the New Horizons automatic station, launched in January of 2006, has been plowing space. The mission’s mission is Pluto, about the appearance of which we know almost nothing. Estimated time of arrival to the target - 14 July 2015 of the year. Nine and a half years of flight - and only three days for close acquaintance with the farthest planet. 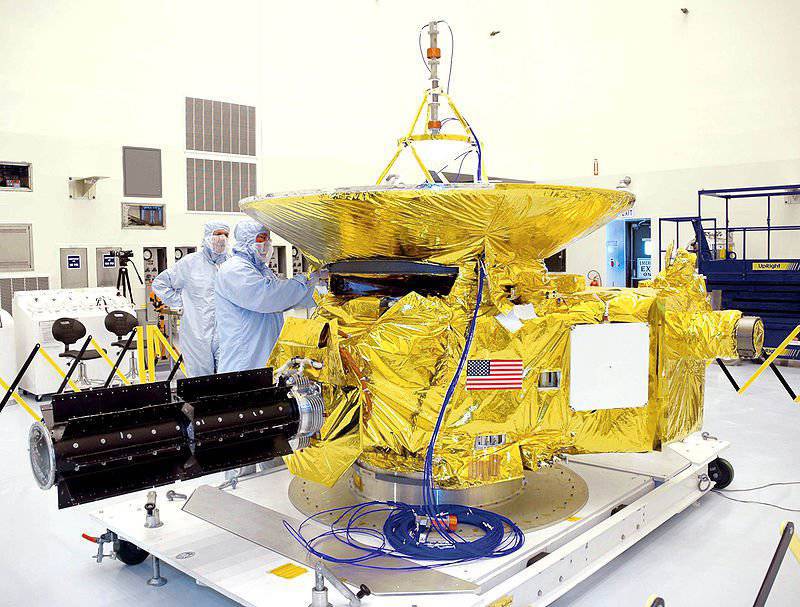 It is expected that after the passage of Pluto, the probe will continue its work in open space until the middle of the next decade, having by this time retired from the Sun on an 50-55 a. The shorter mission duration compared to “Voyagers” is due to the short duration of the radioisotope “battery” operation - by the 2015 summer, the energy release of the RTGs will be only 174 W. 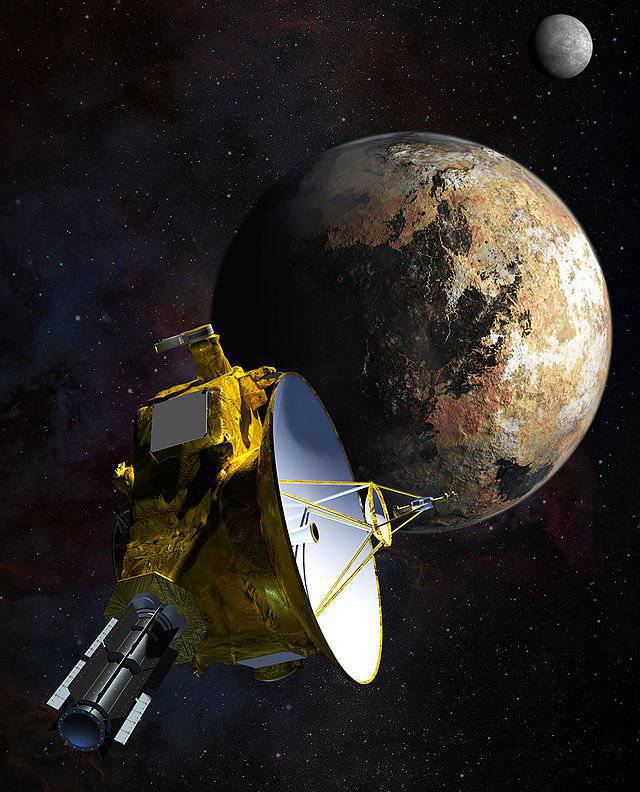 Just behind the “New Horizons” another remarkable object flies - the solid propellant booster unit ATK STAR-48B. The third stage of the Atlas-5 launch vehicle, which brought the New Horizons probe to the departure trajectory to Pluto, also gained heliocentric speed and will now certainly leave the boundaries of the Solar System. Together with her for the same reason two balancing loads will fly to the stars. The second stage (the accelerating block “Centauri”) remained in a heliocentric orbit with the orbital period 2,83.

According to calculations, in October 2015 g. STAR-48B will be held at a distance of 200 million km from Pluto, and then forever dissolved in the depths of space.

The ships will fall asleep, and time will lose meaning for them. After hundreds of thousands, maybe millions of years, all these man-made objects will get to the stars. But scientists are interested in the possibility of creating EXISTING spacecraft capable of continuing to work in interstellar space for an extended period of time, moving away from the Sun at a distance of hundreds of astronomical units.

TAU (Thousand astronomical units). The concept of 1987 of the year, which involved sending an automatic station to the 1 / 60 distance of a light year from the Sun. Estimated travel time is 50 years. The purpose of the expedition: the construction of a grand range finder with the basis of 1000 AU, the measurement with high accuracy of the distances to the stars, including those outside our galaxy. Secondary tasks: the study of the heliopause region, the solution of the problem of ultra-long-distance cosmic communication, verification of the postulates of the theory of relativity.

The power supply of the probe is a small-sized nuclear reactor with a thermal power of 1 MW. Ion engine with 10 years of operation. The authors of the TAU project proceeded solely from the technologies existing at that time.

Currently, the most developed and feasible project of the interstellar expedition is the Innovative Interstellar Explorer. The probe is compact in size, carrying onboard 35 kg of scientific equipment and equipped with three RTGs and a space communications system capable of providing stable communication with the Earth from 200 AU. 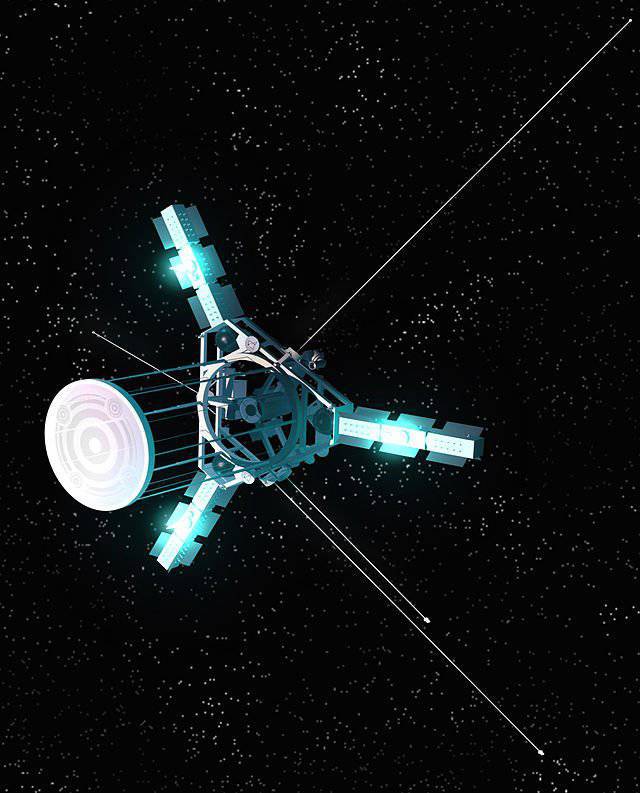 Acceleration using conventional rocket boosters on chemical fuels, gravitational maneuver in the vicinity of Jupiter and ion engines, in which the working fluid is xenon. All three of these technologies exist and are well developed in practice. 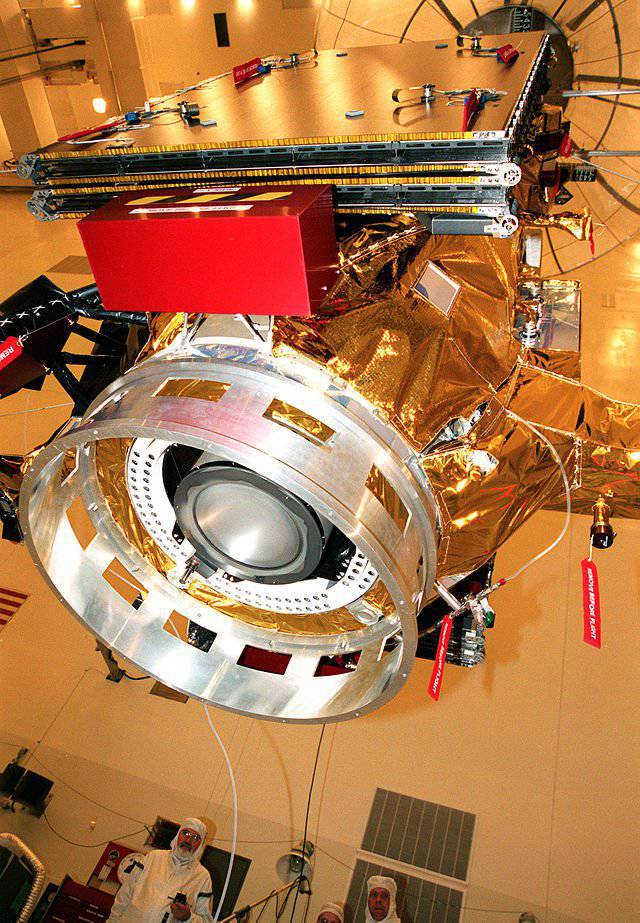 Two things are needed to operate an ion engine: a working fluid (gas) and a few kilowatts of electricity. Due to the negligible consumption of the working fluid, the ion engine is able to work continuously for ten years. Alas, his traction is also negligible - Newton's tenths. This is completely inadequate for launching from the surface of the Earth, but in weightlessness, due to continuous many years of work and high specific impulses, such an engine is capable of accelerating the probe to high speeds.

In the mission of Innovative Interstellar Explorer, due to three methods of acceleration, scientists hope to accelerate the probe to a speed of 35-40 km / s (over 4 AU per year). This is extremely high by the standards of modern cosmonautics (a record for Voyager-1, 17 km / s), but it is quite feasible in practice using modern electric propulsion and high-capacity radioisotope energy generators.

Innovative Interstellar Explorer is being researched by NASA experts since 2003. Initially it was assumed that the probe would be launched in 2014 and it would reach the target (it will be removed at a distance of 200 AU from the Sun) in the 2044 year.

Alas, the nearest launch window has been missed. The interstellar probe program is not a NASA priority program (in contrast to more realistic rovers, interplanetary stations and the Webb telescope under construction).

Favorable conditions for launching the interstellar probe are repeated every 12 years (due to the need to perform a maneuver in the gravitational field of Jupiter). Next time the “window” will open in 2026, but it’s far from the fact that this chance will also be used for its intended purpose. Perhaps something will be decided by the 2038 year, but probably the concept of Innovative Interstellar Explorer by then is endlessly obsolete.

Already, engineers are working on electrothermal plasma accelerators (VASIMR), magneto-plasma-dynamic engines and a Hall engine. These variations of the electric rocket engine also have a high specific impulse, comparable to beats. imp. ion engines, but are capable of developing an order of magnitude greater thrust - i.e. accelerate the ship to the speeds in a shorter time. 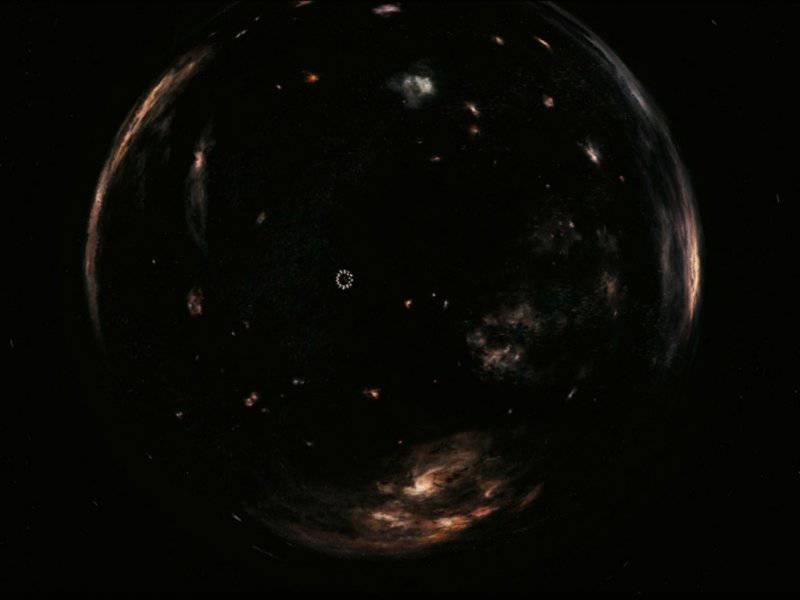 Ctrl Enter
Noticed a mistake Highlight text and press. Ctrl + Enter
We are
Project Longshot. Reach for the starsPhoto of the Earth from a distance 6 billion kilometers
55 comments
Information
Dear reader, to leave comments on the publication, you must to register.