Dmitry Medvedev: Russia will support a tough but balanced resolution on Syria 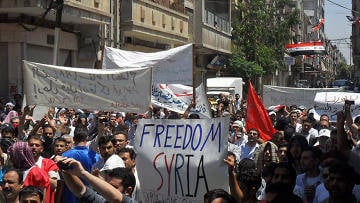 Moscow, barely turning not the best in stories Our foreign policy page, related to the events in Libya, again faces a very difficult choice. Now the Syrian Arab Republic (SAR) is at stake. Moreover, if everything is not so simple with Libya, since Gaddafi was playing a tricky game, then Syria is a strategically important territory for us. You can not rent it in any case.


The Syrian opposition, inspired by the example of the Libyan “Vlasovites”, has become noticeably emboldened and is already demanding that Russia determine who it is with.

8 September The General Syrian Revolutionary Commission, which unites the opposition, made a request to send observers to the SAR, which should, in their opinion, stop the repression of the Syrian authorities against the population. The opposition asked the UN to establish a human rights mission on the territory of the Syrian state, and also demanded access to foreign media in the SAR. In case of Damascus’s refusal to cooperate with the UN, the revolutionary commission proposed to establish more stringent measures, including the establishment of a no-fly zone over the country, following the example of Libya, Reuters reported.

Given the fact that it is impossible to establish a no-fly zone without the suppression of the Syrian air force and air defense, the Syrian “Vlasovites” actually proposed to the “world community” to start a war with ATS. And this is a fact of betrayal of their homeland, which at all times punished in the most severe way. That is, the Libyan opposition has officially admitted that they are traitors to their country, ready to call on any external force to overthrow the legitimate authority. Gaddafi rightly called such people “rats,” otherwise you wouldn’t call them.

On the same day, representatives of the Syrian opposition visited the capital of Russia, they met with the chairman of the committee of the Federation Council on international affairs, Mikhail Margelov. Opponents of the Syrian regime asked to send international observers to the SAR to help stop the violence in the country.

Then Moscow was visited by the adviser on political and informational issues of Syrian President Butain Shaaban. Counselor Bashar al-Assad denied the earlier report by UN High Commissioner for Human Rights Navi Pillay about 2600 killed in Syria during clashes between the opposition and government officials. As Shaaban reported during a conversation with members of the Federation Council of Russia, approximately 700 people were killed on each side. In addition, according to the counselor, official Damascus is ready to provide a list of names of those killed. According to Shaaban, quoted by Interfax, the Russian Federation is in favor of a peaceful settlement of the conflict in Syria, and Damascus welcomes the future visit of the delegation of the Federation Council to the Middle East region.

The Russian Federation will support the resolution of the UN Security Council on the SAR if the document is addressed to both sides of the internecine conflict and if the resolution does not entail the automatic application of sanctions, said Russian President Dmitry Medvedev.

Medvedev said that the Syrian theme was one of the main topics at his meeting with British Prime Minister David Cameron on Monday. In addition, he said that the differences in this matter between the Russian Federation and the Western countries are not fully resolved.

According to him, the difference is not “dramatic”, but it still exists. Russia proceeds from the fact that on the SAR it is necessary to adopt such a UN resolution that will be tough, but at the same time balanced and directed to two parts of the country, to two sides of the Syrian conflict - both the legitimate authorities headed by President Bashar Assad and the opposition - said the Russian president after the meeting. “Only in this case can this resolution have the right to success,” he specified.

New sanctions are currently not needed, as already now a large number of economic sanctions are in force with respect to the SAR, which are imposed by both the EU and the US. “Additional pressure is absolutely not required now,” said Dmitry Medvedev.

The Russian president noted that he considers it important not to allow the “Libyan scenario” in the Syrian state, where the UN Security Council resolution actually led to foreign military intervention in Libyan affairs. He said that it is around this issue that the discussion between the Russian Federation and the West is currently taking place. And he expressed the hope that at the end of this discussion a “mutually acceptable version of the resolution” will be found.

We are in Yandex Zen
Judgment in Tripoli. Saif al-Islam Gaddafi sentenced to death
Libya: after Gaddafi
31 comment
Information
Dear reader, to leave comments on the publication, you must to register.