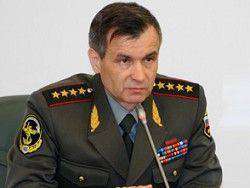 The priests responded to Interior Minister Nurgaliyev, who accused the media of exacerbating xenophobia in Russia.


Orthodox priests recommend that the head of the Interior Ministry of the Russian Federation Rashid Nurgaliyev not shift the problems of his department to journalists and certainly not blame the media for the growth and exacerbation of xenophobia in Russia.

“In some cases, unethical and incorrect statements by individual journalists exacerbate the situation with intolerance towards other nationalities of our country,” he said, citing as an example the “wrong,” in his opinion, coverage of events on Manezhnaya Square in Moscow last December.

The clergymen advise Nurgaliyev not to focus on the problem of ethnic crime, but also not to hush it up. According to them, the exacerbation of xenophobic attitudes in society is not promoted by the media, but by the poor work of the police in protecting citizens, reports Regions.ru
Archpriest Alexander Borisov, rector of the church of Saints Cosmas and Damian in Shubin believes that xenophobia is expressed in the actions of the police, not journalists.

“Xenophobia is expressed precisely in the actions of those policemen who rob and oppress visitors from Central Asia and the Caucasus, which is no secret to anyone,” he said. According to him, the cause of the riots on Manezhnaya Square was "not xenophobia, but corruption."

“The emphasis on the word“ Russian ”should be done very carefully,” the priest said. “The question is, in fact, not whether it is Russian or non-Russian, but that the police really do not cope with their duties, that its goal is not so much law enforcement, how much profit is derived from their actions. So the problem lies in the work of the law enforcement agencies themselves, "concluded Father Alexander.

The rector of the Church of the All-Merciful Savior of the former Priory of the Sorrow Priest on Novoslobodskaya Archpriest Alexander Ilyashenko is convinced that the Russian people cannot be denied their name and national dignity. “A great nation cannot be deprived of its name, its past, or its national and human dignity,” he said. “The point here is not the bad headlines on someone’s view,” Father Alexander explained, “but there is a deep and painful problem that should be paid close attention to by those in power and by those who lead the media and ourselves. "

The use of the word "Russian", the priest noted, has become undesirable in our country since the October revolution. Recalling Lenin's remarks about "Russian chauvinism," Father Alexander said that being Russian was "considered shameful at the time, because it was associated with chauvinism." “And this, unfortunately, remains,” the priest stated.

Archpriest Alexander Lavrin, a cleric of the Church of the Icon of the Mother of God "Life-Giving Source" in Tsaritsyn, believes that it is impossible to focus on the problem of ethnic crime, but it is absurd to keep it silent.

"You can not look at a person only through the prism of national identity," - he said. In this case, according to Alexander's father, "we cancel the person and the proper humanity." At the same time, the priest believes that the language concerning nationality should be "very correct." But to hush up the national coloring of a number of criminal segments, noted Father Alexander, it would also be "absurd." "Often the extremists themselves emphasize their national and religious affiliation," said the priest, advising "to recognize and say this directly."
At the same time, according to Father Alexander, it is impossible to constantly focus only on the nationality of the criminals. “We should pay attention to the work of law enforcement agencies, which, unfortunately, cannot protect their citizens, no matter what nationality they belong to,” the priest is convinced.

Ctrl Enter
Noticed oshЫbku Highlight text and press. Ctrl + Enter
We are
Nurgaliyev: any actions that do not comply with the law will be stoppedIn the slogan '' Russians, go ahead! '' Did not find nationalism
5 comments
Information
Dear reader, to leave comments on the publication, you must to register.