How to protect yourself from being attacked with a stick 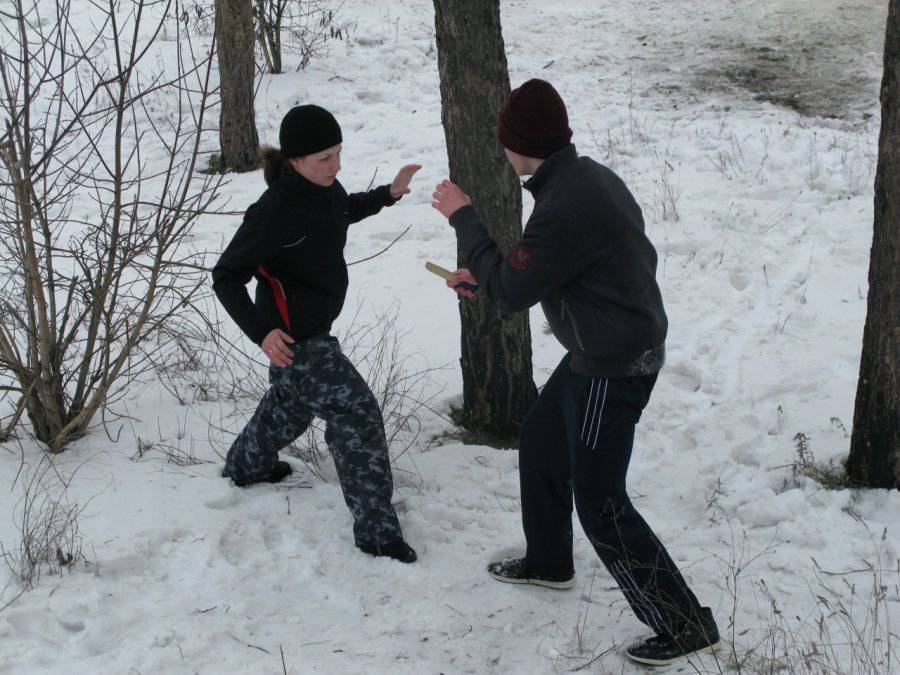 The question of which weapon you can carry around in the city, arises quite often. This means, of course, cold steel, which the Criminal Code of the Russian Federation prohibits to carry with you. All items that have “shock-crushing action, there is only one drawback - in Russia they are forbidden to use for self-defense by law. For the rest, only one solid pluses.

First, the one who knows how to skillfully wield a baton or stick, will be able to use a variety of objects for self-defense. A stick, a hammer, an umbrella, a rolling pin, a stool, or a bottle — all these items have almost the same principle of use. For example, a plastic bottle, even half empty, is a very serious weapon that can cause very serious internal injuries in the hands of a craftsman. Also glossy magazine rolled up, if you try, you can deliver a lot of pain ...

However, all this is suitable for an experienced person, and for a person without special training it is better to use something heavier and more durable for striking back. But if only a magazine or something else is at hand, the same is not very strong and short, then it is worthwhile for them to strike tychkovyh blows that resemble a “knife strike”. It is necessary to beat not only in the corps, but also in the face, since using a blunt object you are unlikely to seriously harm the attacker. In addition, the face can be applied and chopping blows, which in this case will play a supporting role.

Of course, telescopic batons can be a good means of protection, but, unfortunately, they are illegal. And those that are in the free sale on the shelves of various stalls, you can’t even call a weapon, because the connections are not reliable, and the steel itself is too soft. They can be enough except for a couple of blows, but you shouldn’t especially rely on them. There are, however, rubber telescopic batons made in Russia, which should be freely available. However, I did not have to meet them, so I can’t say anything good or bad about them. The usual rubber truncheon is essentially the same stick. It is possible to use it if necessary, but it’s not very convenient to carry it around. This is precisely the biggest minus of the shock weapons, but not the minus of improvised means. Weapons for self-defense should always be with you, but should not attract much attention.

If you look around, then you can find a huge variety of items that can be used in the case of forced self-defense, so you should learn how to handle all sorts of “shock” items. Canes are especially suitable for these purposes: both medical and decorative. As a rule, a medical cane gives its owner a harmless look, but at the same time it is good in the form of weapons for self-defense due to its legality, strength, length and weight. You can also use legally sold "hidden" weapons. For example, an umbrella with a cane or a baton lantern.

However, even the finest weapons will be ineffective if you do not know how to use them. We will not now talk about the methods of training at home. It is much easier to acquire the necessary skills by working out for several months in the relevant section or by attending a couple of seminars on the practical use of everyday objects for self-defense. To date, there are a huge number of clubs oriented to self-defense. Most often, they are trained in thematic units for several weeks or months. From the traditional sections it is possible to recommend to go to classes in the Philippine martial arts section, where the stick is one of the main tools, and the skills to use it are acquired literally in the first stage of training.

So why is self-defense with “shock” objects better than a knife? And how to use this "weapon"?

To begin with, the conditional baton (let's call it that way) is much longer than a hand with a knife. This is very important, because with its help you can withstand the attacker with a knife. The baton will allow you to control the movement of the enemy without causing life-threatening injuries. At the same time, as the owner of the baton, you will be at a safe distance from the enemy with a knife.

Of course, you can kill with a baton if you attack in the neck or in the head. Hit in the temple or on the skull can be especially life-threatening, so it is better not to hit the opponent on the head. Also, do not strike in the neck, especially on the throat. Blows with a bludgeon caught in other parts of the body, for the most part do not carry a threat to life. Although, theoretically, with a baton you can well injure internal organs, but in practice this is unlikely, so you can not especially restrain the force of the blow, resisting the attacker.

I dare to remind you that in this case we are talking about self-defense from the "villain" who attacked you. Your task is to deprive the attacker of active actions, but at the same time do not cause him dangerous injuries. With the baton you can achieve this result. Zones for striking are chosen from the point of view of the greatest efficiency, and not from the point of view of the greatest security, as one would have to act if in hands, for example, there was a knife.

The main goal for which the baton should be beaten is limbs. The aggressor will stretch his hands to you during an attempt to grab or hit. After injuring his limbs, you can no longer worry. After all, you cannot fight with injured arms, and you do not run as well as on broken legs. No wonder in various martial arts, special attention is paid to the methods of combat, with the help of which you can harm the opponent's limbs.

The shock part of a baton is its third distance from you. The blows must be inflicted only by her, and not by any means in the middle part, since a blow by the middle of the weapon cannot do great harm. In addition, the enemy has the opportunity to intercept and snatch a baton from your hands. The main rule in self-defense with a baton - keep a distance and beat off the hands outstretched by the aggressor. The club is valued by the fact that she herself is not able to feel the pain, unlike the hand. At the same time, wherever the blow she struck hit, this place becomes a source of pain. Therefore, no matter where to beat, the main thing quickly and on time. Do not try to divert the blows of the enemy with it, but “chop” and repel his limbs.

If the aggressor is holding a knife, your main goal is the brush in which it is located. Here even the impact force is not so important as an accurate hit. Trying to invest more force in a strike, the chances of a miss increase. At the same time, an accurate but gentle hit on the arm will still be quite painful. No need to stop at one strike, attack with a series of punches. Take advantage of the principle of "phased defeat": a light, precise strike will create a slight pause in the movements of the enemy, thereby giving you the opportunity to inflict the next. Protection is based on the principle “from smaller to larger”, that is, from a light blow to a strong one, from a blow to the hand to a blow to the forearm, elbow, etc.

I would like to note that a blow to the head, although very dangerous, often does not stop attacks. Too much depends on the case. But the limbs, especially the arms, can easily be damaged by a blow with a baton. A successful hit in the elbow can generally disable the hand of the enemy, and the damaged muscles of the forearm will reduce the level of the combat capability of the aggressor.

It is much more difficult to cause serious damage to the legs of the enemy, but with certain skills, it is also possible. Go to the blows to the legs should be after damage to the hands of the enemy. The tactic is simple: first, to deprive the enemy of the ability to attack you, and then leave him and without the ability to move normally. For self defense more and is not required.

In the case of a sudden attack, a counter strike on the face works best. Rapid movement towards the eyes of the enemy will cause him to reflexively retract, which will create some pause in his movements. Take advantage of this moment to strike at his hands. And do not stop there, secure your success with a series of punches. If you can not quickly choose a place for the next strike, hit the spot where the first strike followed. Beat there until you decide where you can still attack the enemy.

If you have a long “stick” in your hands, then first stick it hard in the face or in the body of the aggressor, and then quickly beat it on your arms or legs. The chop can be struck with a “butchered” grip, but it is better to intercept your baton “like a two-handed sword” and put all your strength into the blow. Just do not hit on the head! A blow with two hands with a long stick can even break through the skull of the enemy, and you need nothing for self-defense.

Hands, clavicles, ribs, knees - these are the main goals for “shock” weapons. In all these places, quite thin bones, weakly covered with muscles. Blows to the bones are always much more effective than hitting the muscles. For example, strikes inflicted on the hull can cause great pain, but they will not prevent an adversary from continuing his attack. Of course, a good blow can cause significant damage to internal organs, but this is unlikely to stop the aggressor, but it can make it more angry. Therefore, it only makes sense to strike the corps of the aggressor if it is very convenient and does not require preliminary preparation. The corps should be attacked only with tychkovymi blows and, increasing the distance again, immediately go to the main target - hands.
Ctrl Enter

We are in Yandex Zen
Stick for city self-defense
Self-defense: how to use items at hand
10 comments
Information
Dear reader, to leave comments on the publication, you must to register.