We strive for trouble-free 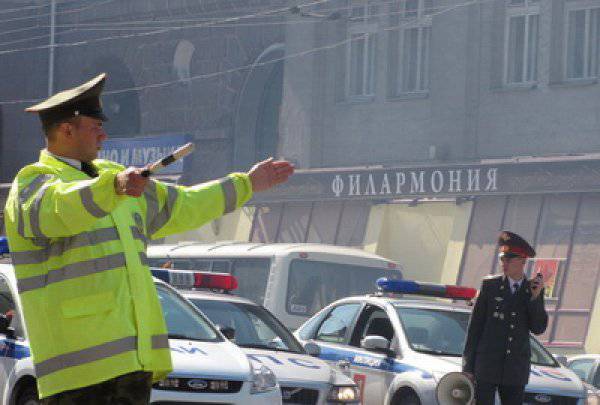 Remember, reader, N.V. Gogol: "And what kind of Russian does not like to drive fast!" I wonder what a classic of domestic literature would say if he suddenly turned up in our time and looked at the ride of his descendants-compatriots on dirt roads and highways? Would you admire recklessness or be horrified by the craziness of “racers”, players in “shashechki” and other traffic offenders?

- The most significant event of the last year, of course, was the return of the Crimea to Russia. A group of troops has been formed on the territory of the Crimean Federal District and the city of Sevastopol. In its composition, of course, there are VAI units.

What problems had to be solved in the formation of VAI structures in the Crimea, how were they solved? What is their number? How was their recruitment - at the expense of the former military units of the Ukrainian army stationed on the peninsula?

- Indeed, on the territory of the Crimean Federal District, two units of the AAI were formed in Simferopol and Theodosia. And transferred to another state with a number sufficient to complete the tasks, the already existing 212-I VAI in Sevastopol.

Recruitment of military automobile inspections in the Republic of Crimea was carried out at the expense of officers serving in military service mainly in the Southern Military District, who expressed a desire to serve on the peninsula that meet the requirements set for them on a competitive basis. The sergeant positions were recruited mainly by military personnel of the security divisions of the movement of the departments of the military service of law and order of Ukraine, who took the military oath to serve in the ranks of the Armed Forces of the Russian Federation and successfully passed the interview and testing on the subject of professional suitability.

During the formation of units of the Military Automobile Inspectorate on the territory of the Republic of Crimea, the main problem was the unsatisfactory state of funds for the location of the AIA and the technical condition of motor vehicles. In order to solve these problems, the issue of locating the AAI in Simferopol on the foundation of one of the military units was worked out.

All VAI facilities in the Crimean Federal District are included in the overhaul plan for 2015 year.

The supply of new samples of automobiles was made through the redistribution of it between the units of the Military Automobile Inspectorate and the supply of new cars purchased under the state defense order.

The formation of units of the VAI was carried out in the conditions of the redeployment of troops to the peninsula, but this did not prevent the fulfillment of tasks both for the intended purpose and for the formation of VAI. Currently, all units of the Military Aviation Inspection on the territory of the Republic of Crimea are formed and staffed with 100 percent personnel, weapons and military equipment.

- 2014 for the Armed Forces was full of sudden inspections, exercises of various levels, the largest of which was Vostok-2014 SKSHU, international competitions, including “Tank biathlon ”,“ Aviadarts ”and others. IAI inspectors certainly participated in providing each of these activities.

Sergey Yuryevich, how did your subordinates work, by what criteria did you evaluate their activities?

- The main criterion for evaluating the activity of the IAI is the absence of traffic accidents.

For the first time in 2014, the contest of professional skill "The best inspector of the military automobile inspection of the Armed Forces of the Russian Federation" was organized and held.

In the course of the All-Army Games in 2014, VAI personnel ensured road safety at the competition venues. For high-quality performance of tasks, military automotive inspectorates, in the areas of responsibility of which competitions were held, additional forces and means of military aviation inspection were tightened.

The main task of 2014 of the year was to ensure road safety during the organization and holding of the XXII Olympic Games in Sochi, the holding of the Vostok-2014 strategic command and staff exercise. The exercises were accompanied by military convoys and traffic control during the movement of troops, the tasks of the Military Automobile Inspectorate in wartime and the order of interaction with military formations were clarified.
All events were held at a high organizational level.

- Unfortunately, the number of road accidents on the roads of the country with grave consequences, that is, with dead and wounded drivers, passengers and pedestrians, cannot be significantly reduced. What is the statistics of the participation of military drivers in road accidents in Russia in 2014 compared to 2013?

- Indeed, despite the measures taken by the country's leadership, the Ministry of Defense, and the Military Automobile Inspectorate in particular, the accident rate and the severity of consequences in road traffic accidents remains high. This is due to the increase in the intensity of the movement of road transport, the increase in the fleet of vehicles, the inconsistency of the infrastructure of the street-road network, the increase in the number of servicemen undergoing military service under the contract and owning personal vehicles.

In the 2014, the Ministry of Defense’s office vehicles caused 67 road traffic accidents due to the fault of drivers, as a result of which 22 people were killed and 93 were injured.

- What is being done to reduce the accident rate?

The accident rate was considered at meetings of military councils with the participation of the leadership of the military districts, as well as during technical conferences in the formations and military units.

For the first time in 2014, the contest of professional skill "The best inspector of the military automobile inspection of the Armed Forces of the Russian Federation" was organized and held.

- According to the traffic police, in the 2014, the most accidents with injuries - 826 - occurred in Moscow. This fact has many reasons, one of which is the giant car park of the capital, because of which the intensity of traffic on Moscow streets is extremely high.

What measures does VAI take to ensure that military drivers in Moscow and other large Russian cities become as little as possible the perpetrators or even participants of road accidents? Can you confirm the effectiveness of these measures with statistical data?

- Emergency depends on the intensity of traffic, and its level, as a rule, is higher in large cities and on highways of federal significance.

The task of ensuring road safety in Moscow is assigned to the 100 th VAI, whose personnel successfully cope with the assigned functions. In addition to the high intensity of the movement, the 100-th VAI exerts additional load on the location of the command and central military administration in the capital. The personnel of the 100 th BAI daily carries out more than 40 escorts of foreign delegations, inspection teams, military convoys carrying personnel, equipment and property of the Armed Forces.

The road patrol service of the 100 th VAI is organized in close cooperation with the traffic police on the ring road, major interchanges and federal roads in specially equipped places.

The competent organization of the 100-th VAI management and skillful actions of subordinate personnel made it possible to reduce the severity of the consequences of road accidents in Moscow. In 2013, 15 made traffic accidents in the capital involving drivers of vehicles of the Armed Forces and servicemen on private vehicles who killed 11 and injured 20 people. In 2014, 14 traffic accidents by these categories of drivers were allowed in Moscow, as a result of which 3 people died and 21 received injuries of varying severity.

I should add that the 100-I VAI in the person of the Chief of Colonel Oleg Vladimirovich Prisyazhny took the first place on the basis of the activities of the military automobile inspections in 2014 year.

- In what condition is the fleet of the Military Automobile Inspectorate of the Ministry of Defense? Was it updated in 2014 year? What models of the previously obtained have been more reliable, that is, operated without damage?

- At present, the Ford Automotive Inspectorate is mainly equipped with Ford-made passenger cars and trucks and tractors of the KamAZ family.

In 2014, the state defense order for the BAI units received 115 units of new Ford models, of which 92 cars, all-wheel drive 15 and 8 minibuses. All of them are produced by Sollers at factories in the cities of Nizhny Novgorod and Volzhsky of the Leningrad Region.
Ford cars are more reliable, operate with the least amount of faults and require less maintenance costs.

- In what areas in 2014 did the military automobile inspections most successfully coped with their duties?

- What are the main tasks facing the Military Inspectorate in 2015?

- First, it is to ensure the combat and mobilization readiness of the military administration and the units of the VAI.

Secondly, further alignment of the staffing level of the military automotive inspection with the volume and nature of the tasks to be performed.
Formation of VAI units in the Arctic zone and outside the Russian Federation at the locations of Russian military bases.

Thirdly, ensuring the movement of troops during the preparation and conduct of the Victory Parade to commemorate the 70 anniversary of the Victory of the Soviet people over the fascist invaders, the Center-2015 strategic command and staff exercise and the All-Army Games.

Fourth, the improvement of the regulatory framework of the Military Automobile Inspectorate.