Army to the ears in the Bologna system 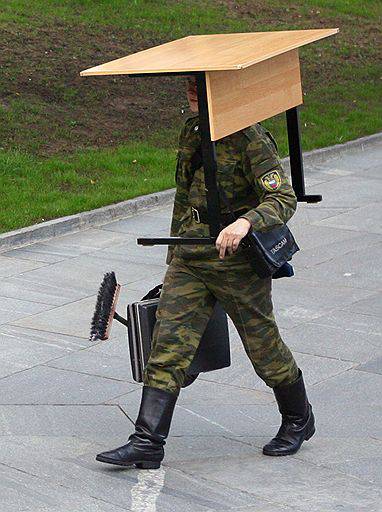 That crossed the reform of education and the armed forces in our country. Starting next year, such a "beast" as a military bachelor is no longer a nightmare for a Russian citizen, but an objective reality. To get a higher education you will need to decide on its level. In principle, there is nothing new for higher military education, but the Ministry of Defense of the Russian Federation decided not only to start teaching freshmen military universities in a new way, but also to take on existing officers and even generals. Interestingly, who will act as the main teacher for all those who will have to relearn themselves in accordance with the new approach to military education. Maybe Mr. Serdyukov?

So, the training of the Russian officer in accordance with the Bologna system adopted in the army will be divided into three stages. The first is a bachelor degree. After four years of training, the military department will receive a junior officer who can command a platoon or a battery. The second stage is a specialty. People who have received a higher military education at this level will have the opportunity to lead the army units associated with the use of high-tech equipment. For example, a military specialist after receiving a diploma and gaining a certain experience in the army will be able to command a communications unit or a regiment of the Strategic Missile Forces, where, as we are told, over the next five to seven years, the number of innovative technical revenues will increase several times. The third stage is the military magistracy. Military masters diplomas will be received by senior and senior officers who will be trained during 2 years at the Academy of the General Staff.

If you believe the military reformers, such a system allows graduates of military universities to make a career, as they say, and “in the civilian world.” In the conditions of today's fierce competition in the job market, not every employer will decide to use a graduate of a military college as an engineer, manager or manager. This is due to the fact that the credibility of the graduates of the current military schools, is at an extremely low level. This fact, despite all its regret, is the place to be.

People who initiated such a pedagogical reform in the system of higher military education say that a new approach to obtaining a military diploma is aimed at increasing the level of graduate motivation. If earlier it was believed that getting stars for epaulettes is just a matter of time, regardless of the level of training and knowledge of the officer’s baggage, now the focus is on getting a quality education and further flawless military service.

The idea, like all the others, concerning the reform of the recent departments, is good. But the result may be far from the desires of military officials. There are several problems with such a discrepancy. First, it is the need for a serious modernization of military universities. In most of the remaining higher military schools, the material base is so worn out that it will be necessary to completely re-equip educational institutions with literally everyone, from training places to technical means of instruction.

Secondly, it is necessary to prepare absolutely new curricula that will be implemented by high-class specialists who are competitive in modern conditions. And where to get such specialists? For twenty years of disorder and vacillation, all military teachers managed to scatter from universities to "free bread." Remains, as they say, the old guard. With all due respect to these people, who in difficult years did not go against the oath, they themselves should be prepared according to the new military and socio-economic realities.

Again, the question arises as to where to get people who, on the basis of new requirements for the training of military graduates, will be able to conduct educational activities in Russian military universities of various levels. Do we have to "hire" specialists from foreign countries. In this case, we may even lose our authenticity, the pivot that the Russian army has been famous for at all times.
In general, good intentions are not always an adequate result.

The main thing is that the reform of military education does not make our state defenseless.