Chechnya In the old places

12 September 2011
17
LJ user twower writes in his blog: A long-time dream come true - to visit Chechnya again. Last time was in it as a military in the autumn of 2001, and now, almost ten years later, I came to this land again. Now Chechnya is different. 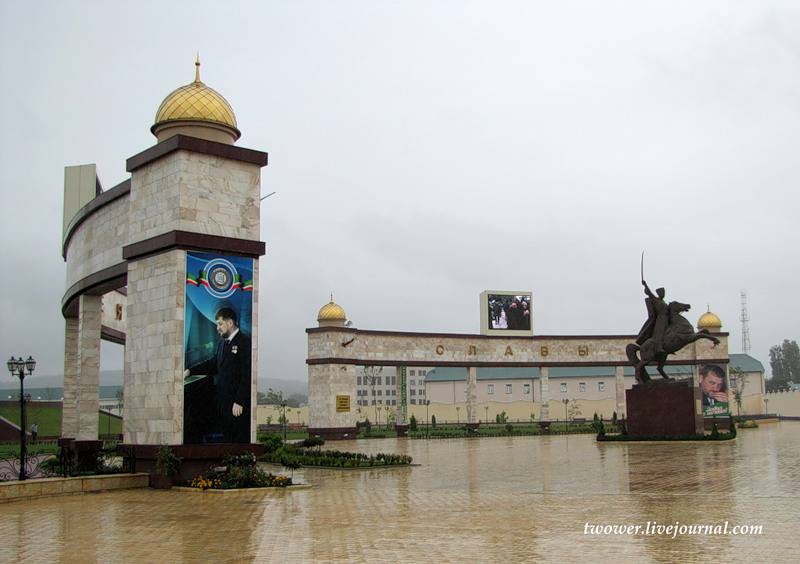 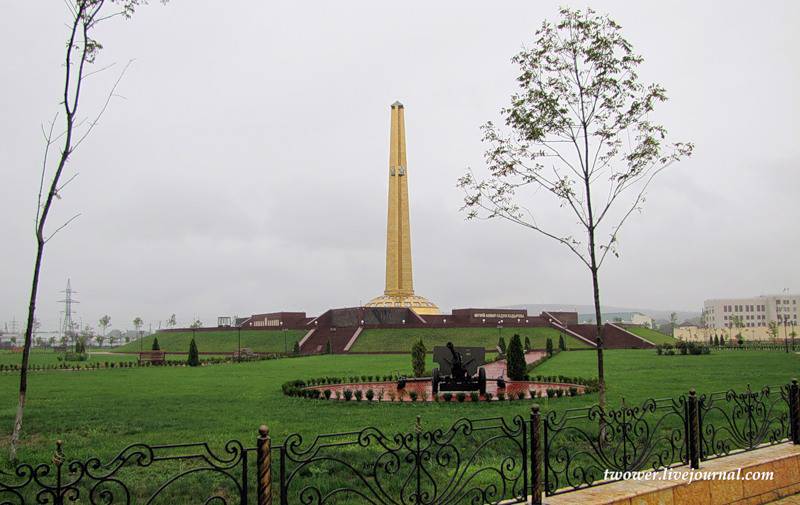 2. Behind the monument - a complex of government buildings 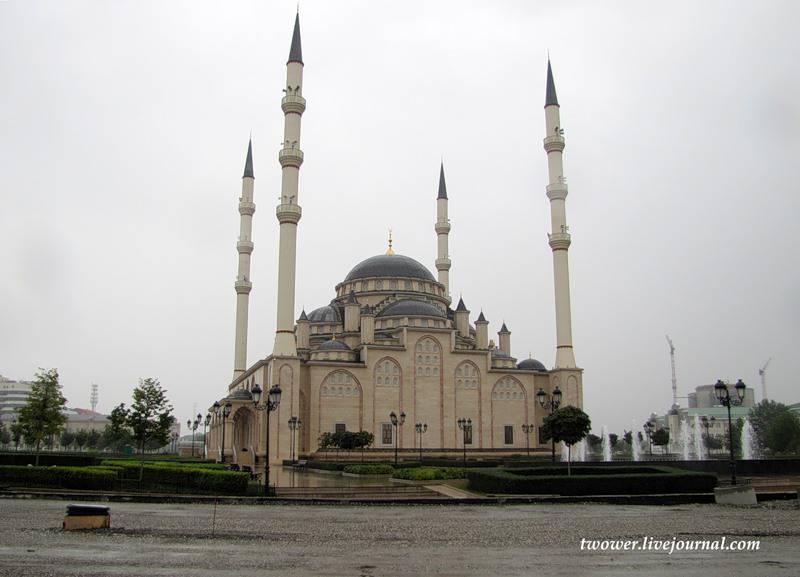 3. Mosque “Heart of Chechnya” in the city center. In 2000, it was an empty area in the funnels, covered with fragments of bricks, concrete chips. February 4 2000-th at this place (slightly to the left) was the general construction of the regiment, on which Colonel Rybakov thanked us for participating in the storming of the city 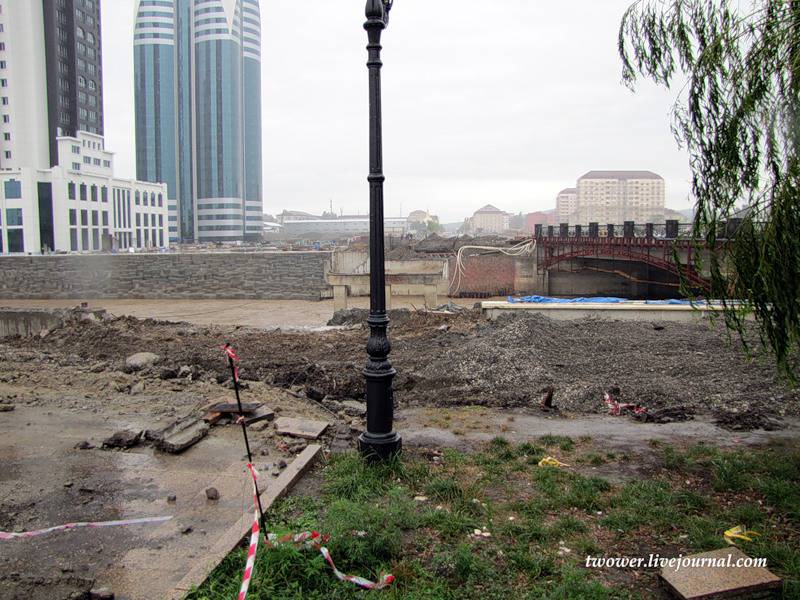 4. Pedestrian bridge over Sunzha near the mosque. From the first war he lay in the river, then he was reestablished several years ago, and now he was again dismantled, only the pillars remained 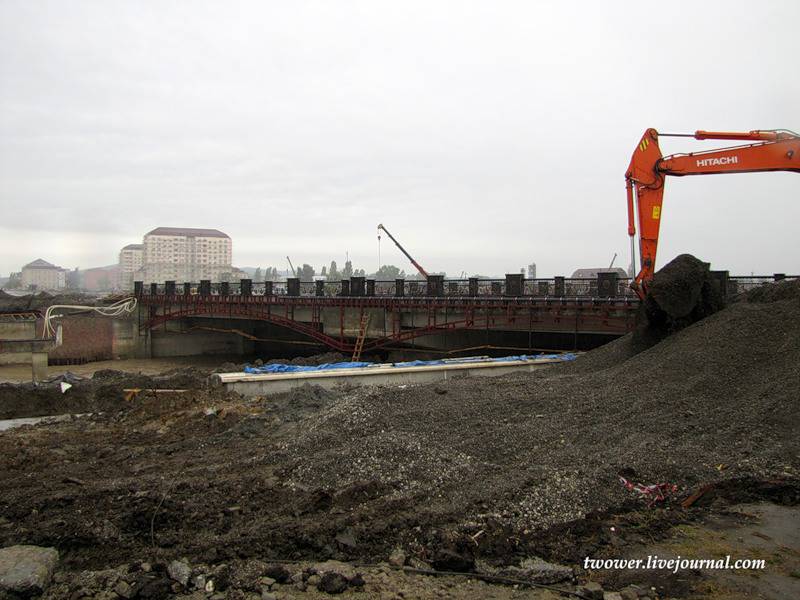 5. But the road bridge. Photographed by the mosque. In February, 2000-st in it gaped giant holes from shells so large that we had to go around the BMP in order not to fall into the river. Since then, it has been restored, but now it is being rebuilt again. 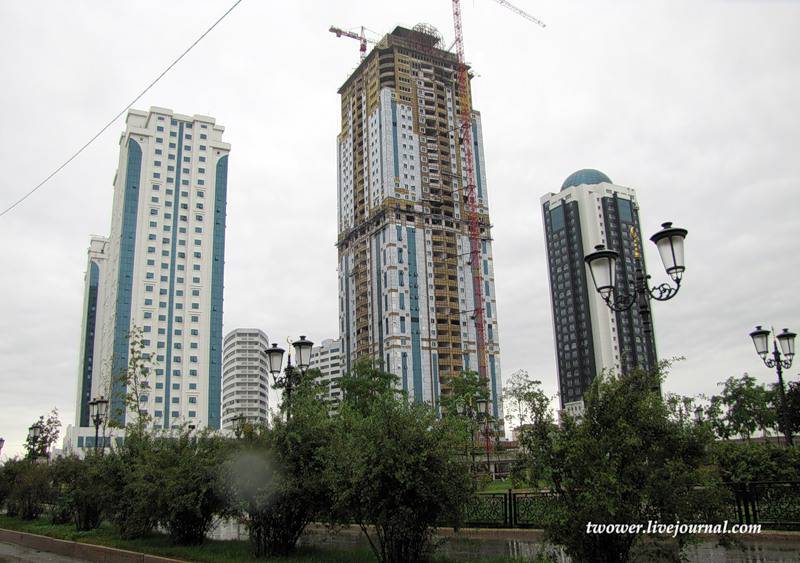 6. Complex “Grozny-City” - residential buildings and office buildings. Photographed from the street Lorsanov (Red front-line soldiers). In 2000, in its place was a small market 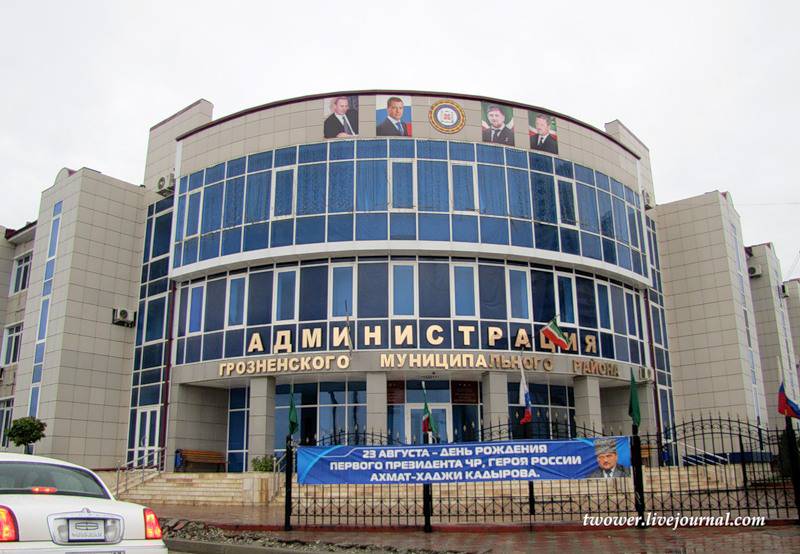 7. The only place where the portraits of all four. By ranking, portraits of Ramzan and Akhmat Kadyrov most often come across, with Putin behind. Medvedev quite a bit. 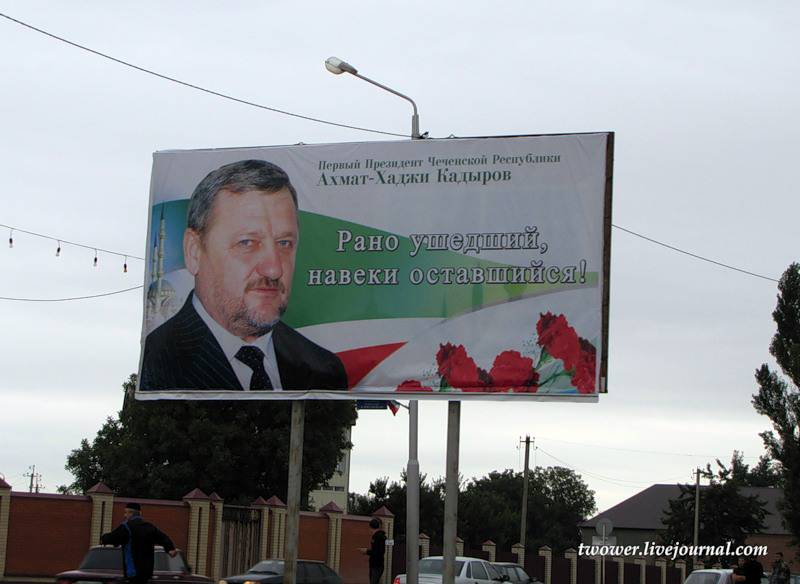 8. The trip coincided with the 60 anniversary of the late Kadyrov Sr., so often there were such shields with a reminder 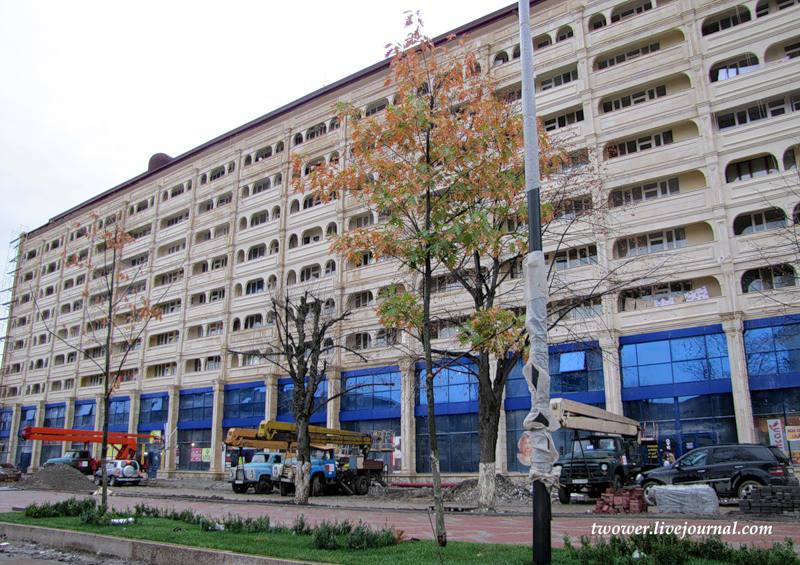 9. In Grozny, portraits are generally everywhere, in smaller villages. By the way, you will not find a single painted one. Putin is really respected in the republic, they say, the man helped to stop the war, stop the lawlessness. Since now life has begun to improve and becomes similar to the usual Russian (in part, but nonetheless), the Chechens no longer want to fight. If you solve the problem of unemployment, then the tension will be over. This is the locals say, and our military.

Television is a separate topic. Local news filled with reports on the work of Kadyrov, the restoration of the republic, the actions of the patriotic club "Ramzan", etc. If the leaders speak Russian, then the officials often answer the camera only in Chechen. In the city you will not hear the Russian language in everyday life, because It is customary to talk in Chechen. One channel broadcasts exclusively various religious programs - sometimes zikr dance, then pray, then surahs from the Koran read. On another program about agriculture, culture, there are also author's investigation programs, telling about the formation of the Kadyrov presidency in the course of a counterterrorist operation. Federal officials and the military with the police in the program are not very favored, but Putin is spoken of in very respectful tones, saying that he and Kadyrov have changed everything for the better.
Full of advertisements of entertainment centers, shops, brand brands: “Sale in the store“ Ecco ”. Putin Avenue, the house of such and such. ”

One of the residential buildings on Akhmat Kadyrov Avenue (former Lenin Avenue). This is an exterior finish, under which there may be holes from shells, sealed with plasterboard on the other side 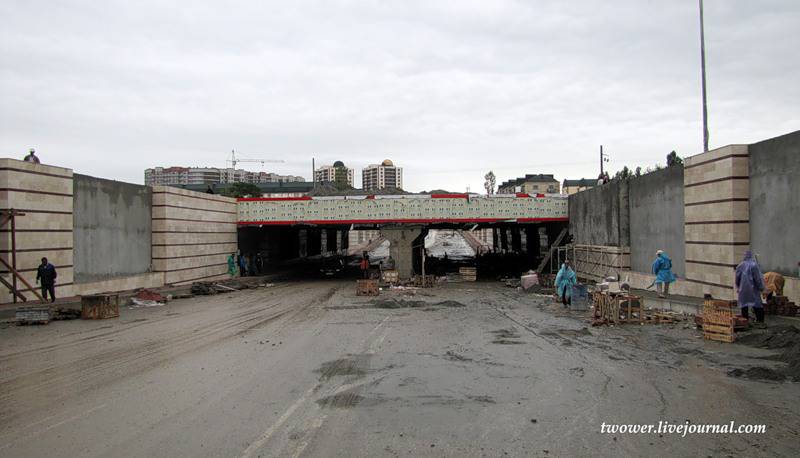 10. “Romanovsky Bridge”. Under him in October 1995 of the year, Colonel General Romanov was seriously injured when a landmine was exploded. 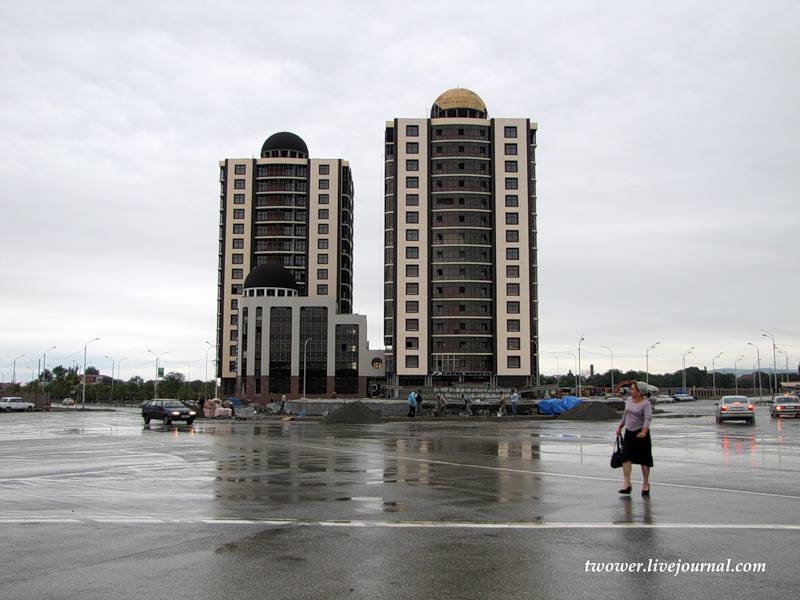 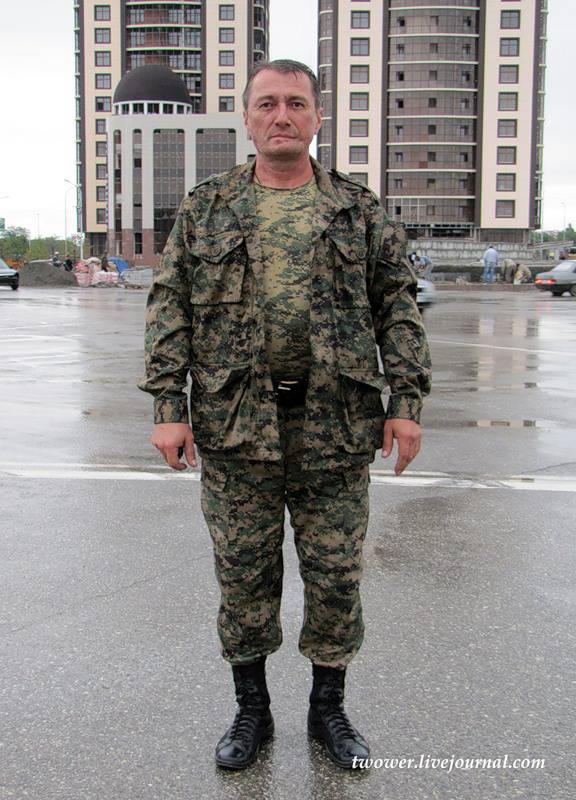 12. This is Sharip - the driver who drove me around the city. Chechen. Since the arrival of our troops in 2000, I went to serve in the army - “To fight with bandits,” as he himself says. In 2001, a land mine explosion was very badly wounded, was on the verge of life and death. Survived, returned to service. Now in the 18-th motorized rifle brigade pulls the strap. 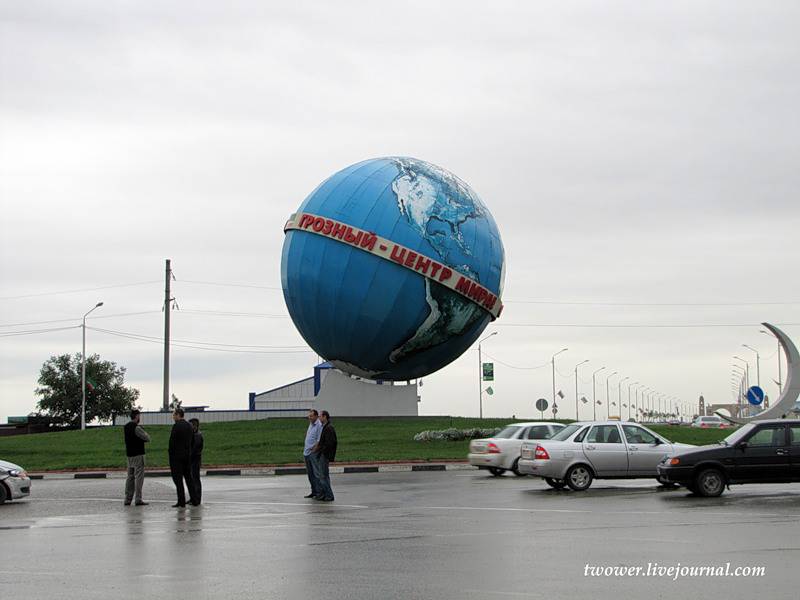 13. Globe at the fork of Argun-Khankala-Grozny on the outskirts of the city. Modest such 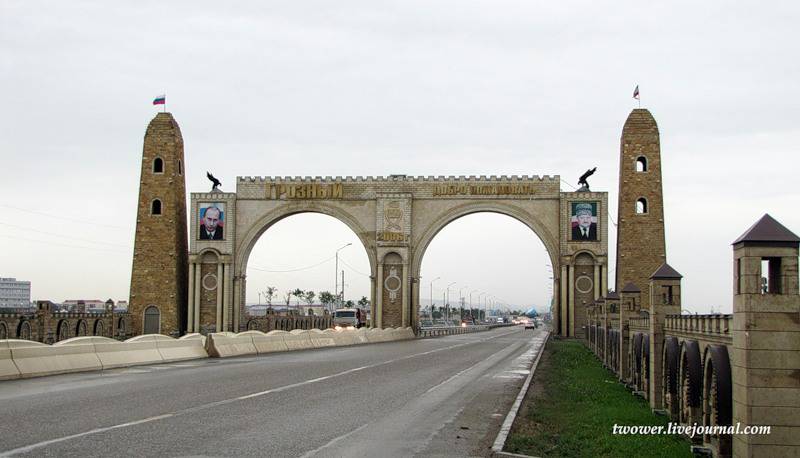 14. Gate at the entrance to Grozny from the Argun side 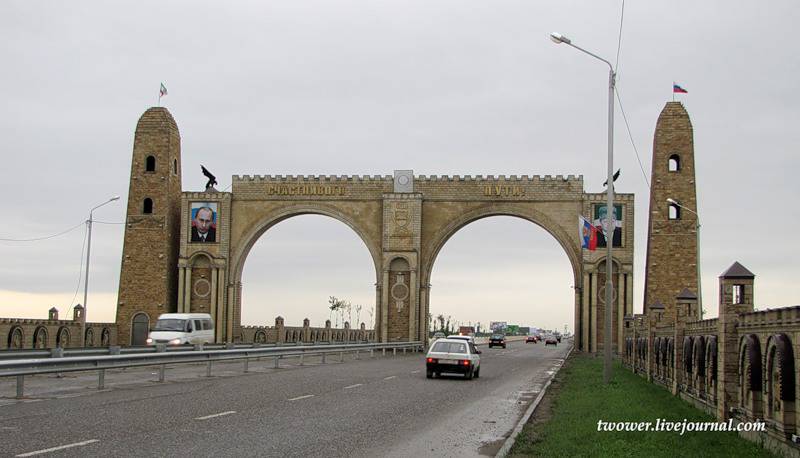 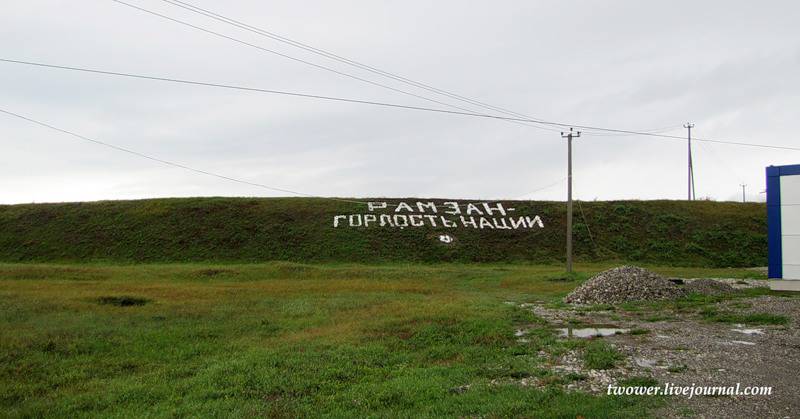 16. Grozny is like an ordinary peaceful Russian city where you can safely walk a Russian person. You can’t see the military, you don’t see the destruction, and the police are not many. Our military say that now on the flat part even at night it is almost safe (in areas north of Terek and even more so). There are explosions and shelling, but there are fewer of them than in the first half of 2000's. In Dagestan and Ingushetia, the situation is now much worse.
In general, I did not recognize Grozny. This is not the dead city as I remember it. Very unusual feeling from what he saw, which is hard to digest.

While I was driving to the landfill site near Sernovodsk, I saw some more memorable places, but there was no time to photograph. I immediately recognized the turn from Tolstoy-Yurt to Terek to the pass, where they were going in late November 99. The oil rig at Grape still stands. Changed the railway station in Chernokozovo, where we were visiting the South Ural SOM in October 2001 for 24 hours. About my trip to 2001 can be read here.

And now there will be photos and videos that are of little interest to anyone. Only Leshka can appreciate, because he seems to be the only one who reads me from our 9 company.
This is the height 195.6 under the state farm “Rodina” (Grozny rural area). It was here that the Czechs were sitting and we had a fight with them 17 December 1999 of the year. View from the crossroads of the airport Grozny-Alkhan-Churtsky 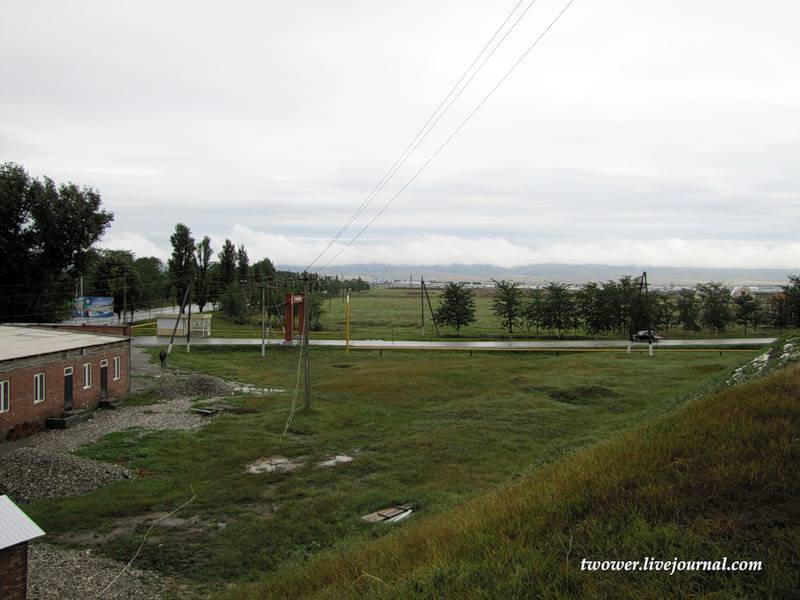 17. View from the height. The same forest belt going to the airport and to the right is the field on which the first platoon was pressed. They made the road three-lane in both directions, on it at night the street racers arrange officially authorized races. The forest belt was cut down by half, and all the trenches that were in it and in which we were hiding were leveled. Buildings in the foreground 11 years ago, too, was not 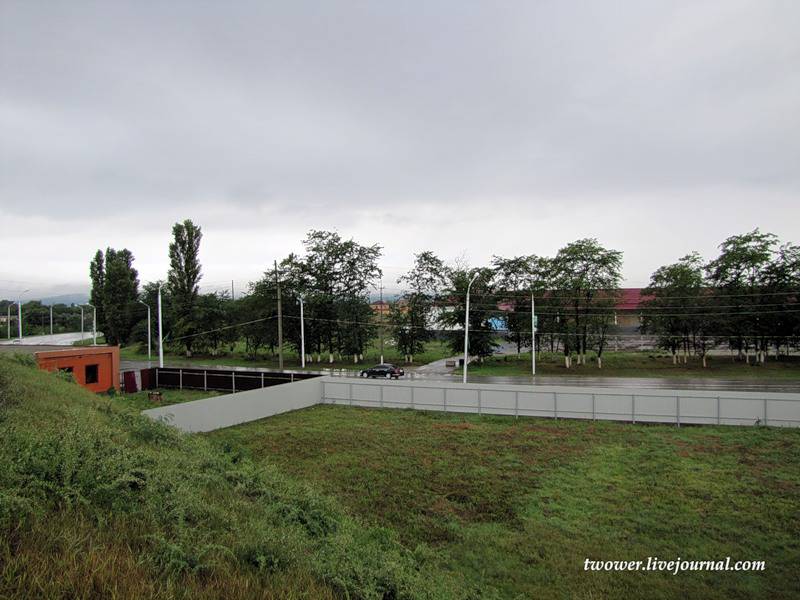 18. View of the turn to Grozny and the state farm "Rodina". For new-built forest belts, which were not there before 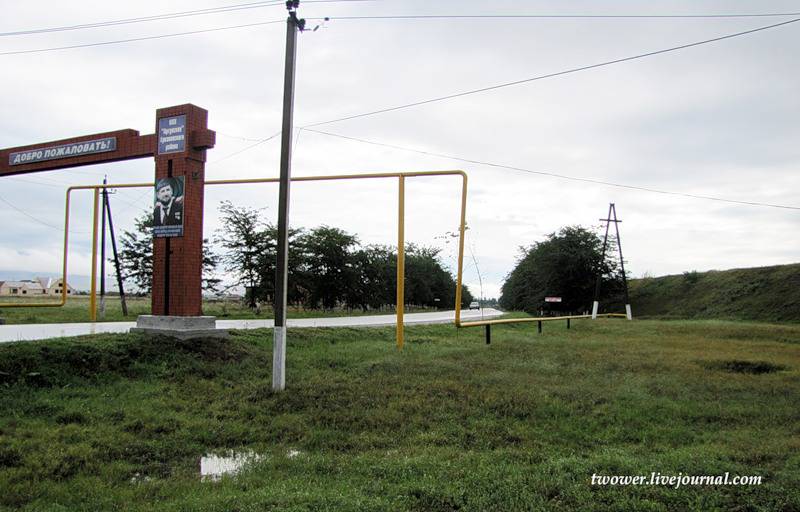 19. View of the road in the direction of Alkhan-Churt, height - on the right. Only having left on it, it was possible to breathe easy and to get out from the hatch of the BMP, because the area between the “Motherland” and this turn was swept through by a sniper
Ctrl Enter
Noticed oshЫbku Highlight text and press. Ctrl + Enter
We are
The future aviation museum in Medyn 1 March 2014Museum in Upper Pyshma-3
17 comments
Information
Dear reader, to leave comments on the publication, you must to register.