January 20 2015
7
Sergey Shoigu, the Minister of Defense of the Russian Federation, said on Tuesday, 13 in January, that the testing of technical means of training at Russia's first center of interspecific combat training in Mulino is scheduled to begin in full in early February, 2015. At the first conference call this year, Shoigu noted that at present, Russian industrial enterprises are engaged in the elimination of certain constructive inconsistencies of simulators and military equipment, as well as shortcomings in software. At the same time, the Minister of Defense expressed the hope that during January 2015, these works will be fully completed.


Since December 2014, in the combat training center in the village of Mulino (located in the Nizhny Novgorod Region), troops from the Western Military District (ZVO) began to work out various training tasks with testing technical training equipment for personnel. According to Sergei Shoigu, from February 1, 2015 for 7 weeks the center will undergo a full training cycle. 6 Separate tank brigade of the ZVO. At the same time, the center will conduct test tests of various technical training aids in full. The minister focused on the equipment that Russia was forced to replace due to supply failure and delays in equipment from Germany.

The Minister of Defense also told reporters that interspecific combat training centers should appear in every Russian military district. It is expected that by the year 2020 they will all be merged into a single virtual battle space. According to Sergei Shoigu, the existing material and technical base of the centers will help to conduct full-scale interspecific training of the Russian troops, as well as significantly reduce the time of combat coordination and increase the readiness of the formed combat groups to solve their combat missions. “As a result, we will be able to model the operational-tactical situation in any of the operational areas, regardless of the locations of subunits and units,” said Sergei Shoigu, stressing that this should significantly improve the quality of troops training. 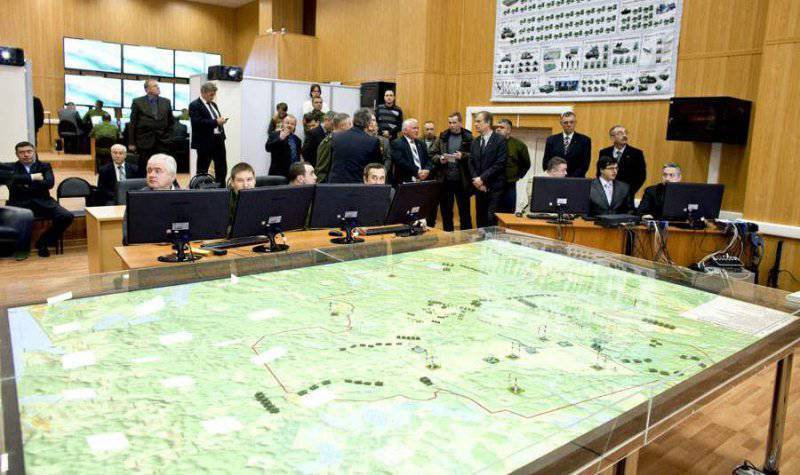 Recall that in the summer of 2014, the German government decided to withdraw the permit from the company Rheinmetall, which, together with the Russian Federation, was engaged in the construction of a combat training center in Mulino. Rheinmetall supplied the necessary laser firing simulators for the center. Finish the landfill had already by the forces of domestic companies. At the same time, the Ministry of Defense of the Russian Federation notified Rheinmetall of its own financial claims, which are based on the failure of the contract for the supply of equipment to the landfill under construction. On the claims of the Russian military in an interview with TASS, said Deputy Chairman of the Board of the Military-Industrial Commission of the Russian Federation Oleg Bochkarev. According to him, work in this direction has already begun. The first notices and documents of the Ministry of Defense of the Russian Federation in December last year have already gone to the German side. At the same time, Bochkarev stressed that in the case of the construction of a landfill of the Mulino type, Moscow will no longer cooperate with Rheinmetall.

As mentioned earlier, the German authorities finally froze the implementation of the transaction on the construction of a training center in the Nizhny Novgorod region. The cost of the agreement concluded between the countries was estimated at 120 million euros. At the same time, the Russian military began to prepare claims against the German company in the summer of 2014. In the event that the case eventually reaches the court, the process may end up at Rheinmetall at great cost.

It is known that the new interspecific training center for combat training in Mulino will be equipped with complex group simulators, with which you can create a real picture of the battlefield in the 3D format, Rossiyskaya Gazeta reports. At the training complex, 700 fighters will be able to immediately fight in the virtual space at once. They will also be able to undergo training with the use of laser shooting simulators, which allow real-time firing, including with the use of artillery firing from closed positions. 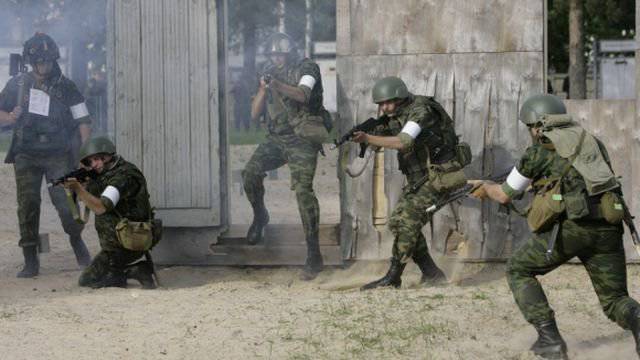 The next step of the training is practical exercises on the scale of the whole brigade. It is important to understand that a virtual model of combat on the installed simulators and using laser simulation will be formed for each type and branch of troops, as well as for a specific theater of military operations, in which the serviceman will meet with his likely adversary.

“Today we are creating a model for a military unit, be it a marine brigade, an airborne assault brigade, or a ground brigade. If a brigade of marines passes the training, it will be unimportant that it is now located on the territory of the Nizhny Novgorod region: a model of those maritime theaters of operations will actually be created, on which it operates, ”said First Deputy Defense Minister Arkady Bakhin, explaining the essence used innovation. According to Bakhin, the training of each soldier at the Mulino training center is designed for a seven-week period.

The center for combat training of ground forces in Mulino is a unique project for Russia. In mid-December 2014, the official website of Spetsstroy of Russia reported on preparations for the delivery of the first phase of this object. The construction of the center is carried out by the General Directorate of Engineering Works No. XXUMX at Spetsstroy of Russia. The center of combat training in Mulino consists of two separate territories: administrative and tactical. 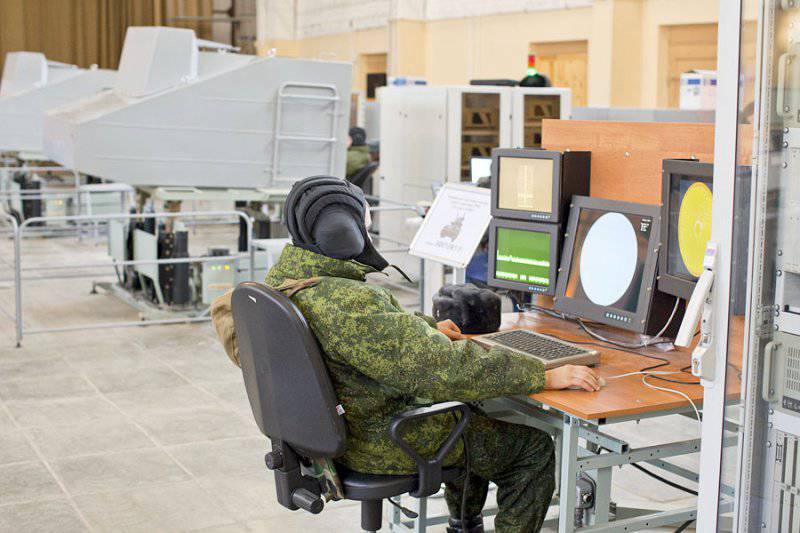 The design and construction work at the facility is carried out in the 4 phase (4 launch complex): the first and second launch complexes include the main buildings and facilities of the administrative zone of the center: the headquarters of the combat training center, the training complex, the erection complex, the repair complex and the technical services, a canteen, a warehouse of wealth, a contractor’s personnel building, a fire station, a pumping station, a car wash station, transformer substations, a checkpoint, and shelters for heavy equipment. The third launch complex includes structures and buildings of a tactical test site, which consists of 8 sites. The fourth launch complex is an energy center, a water supply system, a gas pipeline, a water intake unit, and on-site engineering networks of the tactical and administrative zones. Also at this stage should be carried out work on the improvement.

On the ground with an area of ​​more than 25 hectares, various elements of the village and cities will be assembled, intended for training the soldiers of the ground forces. At the moment, the buildings of the 3 building have already been built and handed over to the customers: a training and training complex, an installation complex and the headquarters of the combat training center. Full commissioning of the center for combat training in Mulino is scheduled for the second half of 2015.

According to the Acting Director of the General Directorate of Engineering Works No. 2 at Spetsstroy of Russia Oleg Sirazetdinov, currently the site employs more than 600 highly qualified specialists, as well as more 90 units of various construction equipment. The main difficulty in the implementation of work under this project, he called the great distance of objects from each other - up to 30 kilometers, as well as access roads on tank and dirt roads. Currently, more than 70 km of fiber-optic communication lines, more than 25 km of temporary roads, more than 10 km of sewage networks, heating lines and water mains, more than 12 thousand cubic meters of concrete, 3,5 thousand tons of steel structures, 40 thousand square meters of a three-layer sandwich panels and about 2 million pieces of bricks. 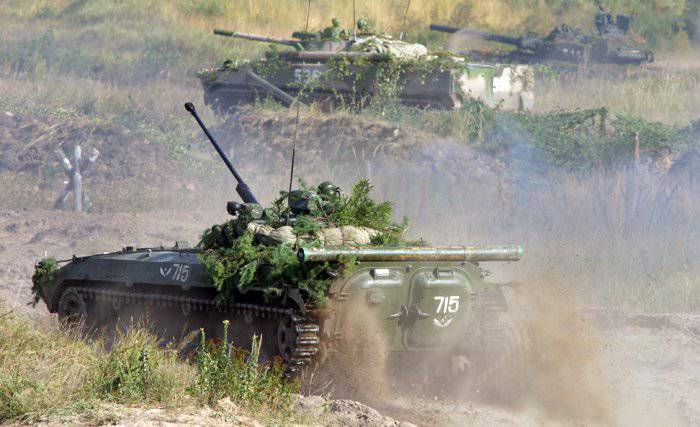 In early December, 2014, United Instrument Engineering Corporation, which is part of the Rostec state corporation, supplied its software simulators for the Mulino center. Training in the center, which is designed for a brigade tactical group, can take up to 30 thousands of Russian military personnel annually. Weapon motorized riflemen, infantry fighting vehicles and tanks in this center are equipped with laser pulsators, with the fixation of hits in the equipment equipped with sensors and military personnel. This solution not only allows you to recreate the tactical situation in the center as close as possible to the combat one, but also significantly saves ammunition, fuel and the life of combat equipment. Earlier in the Russian Defense Ministry they said that thanks to such savings, the center could be recouped already after 2 operating years.

In terms of aggregate training capacity, the interspecific training center in Mulino will become the largest in the world, since it will be possible to conduct training for a brigade tactical group here. The second largest training contingent and the first landfill in terms of area is located in the USA in the Mojave Desert in California. This polygon with an area of ​​approximately 260 thousand hectares is designed for the preparation of battalion tactical groups of 2-3. The third largest polygon located in Germany is the German Center for Combat Training of the Ground Forces, located near Magdeburg. A ground covering about 23 thousand hectares, from 2006, is designed for training one battalion tactical group.

The area of ​​the directly fighting ground in Mulino, intended for conducting bilateral exercises on it, should be about 200 square kilometers. In addition to training troops in the conduct of maneuvering combat operations and actions in urban environments, the center will be able to conduct training for other elements of an all-arms battle, such as building bridges, speeding up rivers, and providing air defense to ground forces. After completion of the training cycle, final exercises will be conducted, which should ensure uniformity of training and verification of its level. In addition, in the interspecific combat training center in Mulino it will be possible to train brigade commanders using a combination of staff, field and simulation training facilities.

Ctrl Enter
Noticed oshЫbku Highlight text and press. Ctrl + Enter
We are
Innovation Day of the Southern Military District: Pictures from the ExhibitionThe current state of combat training of ground forces and the requirements for its provision with technical training aids
Military Reviewin Yandex News
Military Reviewin Google News
7 comments
Information
Dear reader, to leave comments on the publication, you must sign in.