German special forces will receive a car for a million euros 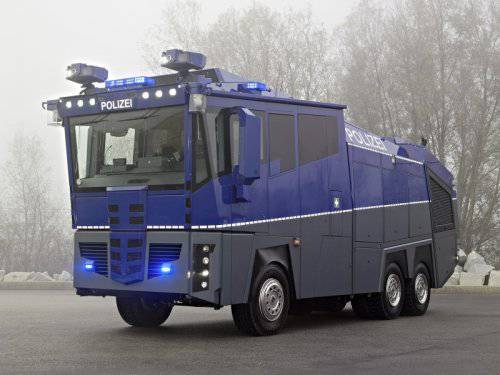 German special forces - the most modern and well-armed. This is evidenced by the latest acquisition of the German government: Water Cannon 10000. The car costs at least a million euros and is considered today the most modern and high-tech in its class.

The main function of the car - the suppression of riots in the streets. But if suddenly there is no work on the main specialty, that is, it has several adjacent ones, for example, putting out fires and delivering drinking water. The aluminum tank of a police water cannon contains 10 tons of water - it is this figure that is reflected in the model name.

The basis of the car taken modified chassis Mercedes-Benz Actros 3341. The car suppresses with its size: its length is ten meters, the width is almost four, and the weight is 31 ton. This fortress on wheels is driven by a V6 turbodiesel with a capacity of 409 l. s., motor technology BlueTec SCR, compliant with Euro-5 standards.

For the convenience of passengers, the designers of the Water Cannon 10000 had to change the cabin: now it can hold five people. The crew consists of a driver, a squad leader, an observer, and an operator controlling a water cannon. The cabin has climate control and a fridge for drinks.

The truck cost the government a million euros, while the price of the original Mercedes-Benz Actros 3341 tractor is about 100 thousand euros. The most expensive part of the car is the additional special equipment: a pump with a capacity of more than 60 liters per second, a rotary barrel of a water cannon “shooting” at 60 meters, a video camera with a review of 360 degrees, nozzles under the bottom (to extinguish a combustible mixture that fell under the chassis), and Of course, circular reservation for a high class of protection.

The fabulous cost of new items does not stop the German government. Technique, which today has special forces of Germany, has long been outdated. Used Wasserwerfer 9000 machines (abbreviated as WaWe) were purchased in the late seventies and look very modest by modern standards. Therefore, it is expected that in the near future the government will purchase some more Water Cannon 10000.
Democrats

In Russia, in order to curb riots, they use very different equipment. Until recently, there were about a dozen units at the disposal of the Ministry of Internal Affairs: Makhtaz water cannons of Israeli production and Lavina-Uragan - Russian ones. Now this equipment is considered obsolete, so the government recently decided to start producing new, more advanced models of water cannons in the Kurgan Region. Now they are picking up a clumsy "Louvre" on the basis of the Ural vehicle with a tank for nine thousand liters of water, a more nimble Storm on the basis of KamAZ and a small Fountain on the basis of Gazelle.

And the homeland of armored water cannons is Germany. The first such car appeared in 1931 year, with its help the police dispersed unemployed demonstrators on the streets of Berlin. The first water cannon was built on the basis of a Mercedes truck and was a hybrid of a watering machine and an armored car. A water tank was located behind the car, and the cabin was sheathed with steel sheets for protection. On the back was a rotating turret with a hoist. After Hitler came to power, the crowd dispersed cars disappeared from the police arsenal, as did protest demonstrations from the streets. True, it was worth Germany after the war divided into East and West, as water cannons immediately returned.