Factories - the Chinese, the land - the Koreans, or a new program for the development of the Far East 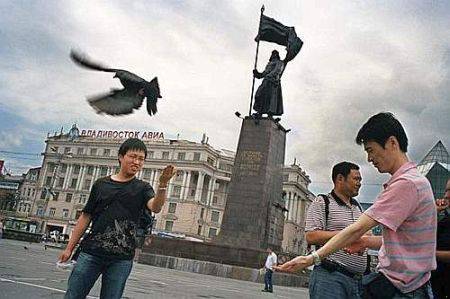 Already that year in our country recorded a decline in population. Departures abroad, unwillingness to give birth due to a low standard of living, numerous abortions in 20 in recent years have reduced the population of Russia by almost 10 million people. We can say that a large metropolis died out, comparable in the number of residents to the current Moscow. The state is trying to solve problems with increasing the birth rate through additional social guarantees. In some regions, this really gave a tangible increase in the number of babies, while in others it had practically no effect on the current situation. Huge mortality literally overwhelms Russia in recent years. At the same time, the number of deaths at the so-called working age increased significantly. They die from the use of poor-quality alcohol and tobacco, a huge number of young people die in car accidents, the number of deaths from drug use is growing. All this can neither make a negative mark on the development of the regions. The population of some subjects of the Russian Federation is rapidly decreasing as a result of migration.


Last year, a federal census was conducted in Russia. According to its results, it turned out that the most bad things are with demography in the territory of the Far Eastern Federal District. While in the country as a whole, the number of inhabitants decreased by a little less than 1%, in the Far East there was an 15-percent decrease in the population. If we talk about the national composition of the Far East, then every year the percentage of immigrants from the countries of Southeast Asia is growing, and the number of Russians in this region is steadily decreasing.

The Far East is the richest region, the potential of which is not even developed for a tenth share. With a serious reduction in the population in the Amur Region, the Khabarovsk and Primorsky Territories, in Kamchatka and the Kuril Islands, as well as in other regions of the region, there will soon be no one to conduct economic activity on this land. The situation is even more paradoxical, if we recall that people in the Far East literally go for money: oil, gold, diamonds and other natural riches. At the same time, even at large defense enterprises in the region, wages are several times lower than in the Federal Center. Do not forget that in the Far East 90% of goods - not local production. Something is brought from other regions of the country, but most are purchased in China, Japan and Korea. Most of the arable land became overgrown with weeds. The production of meat and milk fell almost 10 times compared with the last year of the USSR. This figure is surprising, because in many Far Eastern lands you can grow almost any crop, up to melons.

People are fleeing insecurity and poverty. Thousands of families leave their homes in order to have a better life closer to the Center. It should be remembered that for the majority of residents of the same Vladivostok or Khabarovsk to fly to relatives in Moscow or St. Petersburg is an unaffordable luxury. It’s no joke to say that a one-way plane ticket costs 1000 dollars. And this is just an economy class. How many times have words been spoken from the high tribunes that the Far East needs to be “brought closer” to the rest of Russia, by all means, otherwise problems will grow exponentially.

In this regard, regional and federal officials have various plans in their heads about how not only to stop the flow of migrants from the Far East to Central Russia, but also to significantly increase the number of inhabitants in this region. At the same time, it is often not a question of creating normal living conditions for Far Easterners: raise wages, build new high-quality housing, open kindergartens, hospitals and schools. Instead, we suddenly hear that officials are going to attract “helpers” to the Amur Region and Primorye for the development of Russian lands from foreign countries. So, after visiting Kim Jong Il in the region, some “hot heads” heard the words that it would be good to lease several hundred hectares of agricultural land to North Korean citizens. Suppose, they say, hard workers work - feed their people. What do we have - land, is it enough? ..

Whether this was said in a faint and dizzy state, or this fraternal help to friendly people, is still unknown, but the fact remains. Russian officials dispose of land for which the blood of their ancestors is shed, as if they were their masters.

You can already begin to imagine how friendly neighbors from North Korea erect huts along the border (on our side) and take up their affairs on our territory. At the same time, it is far from a fact that our “friends” will pay something to the local treasury for this semi-present-half-rent. Rather, it will happen the way the citizens of China flooded the same Far East. The quota of entry of citizens of the Middle Kingdom, for example, for the cultivation of cucumbers is given at the rate of 2 person per hectare, and in fact, on this hectare 100 people enter. The local migration service only throws up his hands and declares that, they say, we can not do anything - they all look the same. All this is more like a fairy tale about the chambers, which was allowed to warm one, and then the guests were added more and more. Everyone knows who came last, and what came of it.

Of course, the issue of empty lands must be addressed. But how many citizens of Russia remain in the country who would love to work on the land. Only according to official data, we have more than 7% of the unemployed. Without a doubt, if you invest in infrastructure development, open jobs, many of these people will go to the Far East to live and work.

If the policy of the authorities is aimed only at the fact that “immigrants from China and Korea will save us,” this will lead the Far East to complete degradation for Russia. Chinese or Korean farmers are unlikely to share business with the Russians. In the best case, the Russians from the number of Russians will be prepared for the role of attendants on farms and factories of citizens of neighboring states. Today in Blagoveshchensk the lion's share of enterprises with Chinese capital.

Apparently, for now, there is no one in Russia to pull up power and put an end to squandering state lands with the involvement of guest workers, who will be happy to assume the role of the owners of the Far East.

We are in Yandex Zen
Missed chapter "Strategy-2020"
10 comments
Information
Dear reader, to leave comments on the publication, you must to register.