Israel continues to fever. Continuation of the Cold War with Turkey 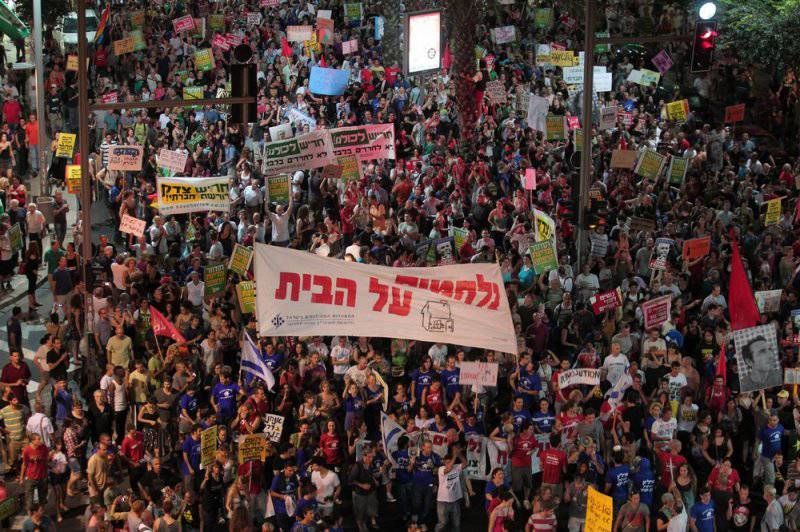 Recently in Israel, protesters who oppose high housing prices were able to break another record. According to various estimates, from thousands of Israelis gathered for the "march of a million" people, from 350 to 500. For the seven millionth state, this is quite a significant figure.


Although very many participants so-called. The “tent revolution” rejects political slogans, and discontent with the actions of the Cabinet of Benjamin Netanyahu continues to grow. But, as you know, any revolution has its own logic, today economic requirements prevail, and very few people know what will happen tomorrow. The “Left” constantly pour gasoline into the fire, speaking among the demonstrators with open demands for the resignation of the Israeli government. Although in the last protest the members of the “Meretz” and “National Left” parties were not particularly different among the huge mass of demonstrators. 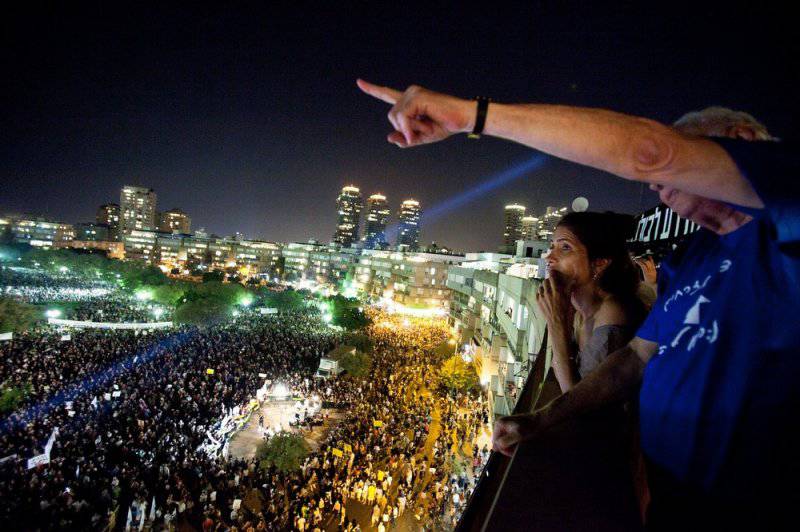 In addition, for most of the protesters, one of the key slogans was the demand “The people demand social justice!”. It is very symbolic that the square of Tel Aviv Kikar ha-Medina, where the most expensive boutiques and restaurants in the capital are located, became the venue for the "march of a million".

According to the Israeli media, it was in Tel Aviv that the protest was the largest one - up to 300 thousand people participated in it. The demonstrators held placards with slogans that reflected popular discontent with social injustice, a significant income gap between the poor and the rich: “A whole generation yearns for the future”, “A country where milk and honey flow, but not for everyone.” 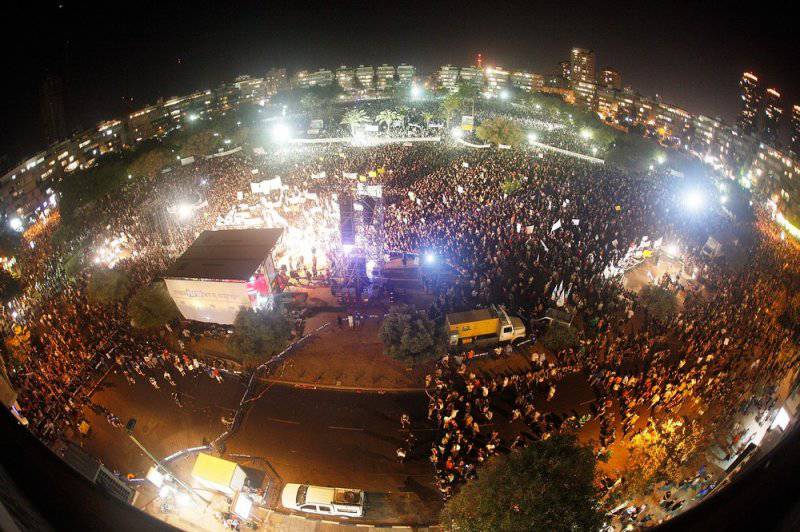 It should be noted that if at the first stage of the “tent revolution” the main demand of the protesters was to reduce housing prices, now protesters have increasingly begun to recall other problems that reflect various social, national aspects of the domestic political situation. Israeli media also noted that Israeli Arabs participated in the protests: they put forward demands for full participation in the socio-political and economic life of the state.

Residents of such Israeli cities as Nahariya, Sderot and Kiryat Shmona, who are most at risk from rocket attacks, have their own questions to the Israeli authorities. 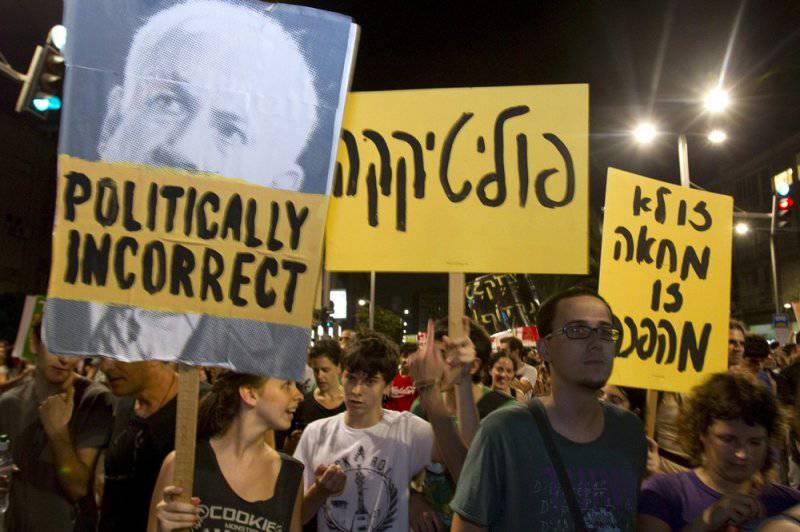 The government of Benjamin Netanyahu almost does not respond to social protests, while continuing to implement previously planned measures to overcome the crisis. Although in early August in Israel created a special commission chaired by Professor Manuel Trachtenberg. Head of Government Netanyahu announced the beginning of economic reforms in the country almost immediately after the start of mass unrest. But the results of the commission can not see. Therefore, many of the activists of the “tent revolution” do not believe in the effectiveness of the work of this commission. They created their alternative meeting.

Further developments will largely depend on whether the government will go to a serious budget change, taking into account the demands of the protesters. And the Israeli government is facing a serious problem of ensuring external security, there is a constant increase in military spending in the state. Recent foreign policy events suggest that tensions will only increase.

It is doubtful that the government will be able to solve the social problems facing in a short time, so the middle class of Israel and other groups of the population will continue to express discontent. The first feature of the “tent revolution” of Israel is the fact that the main driving force is the middle class, which lives in relative prosperity. The second feature is the peaceful nature of the protests. 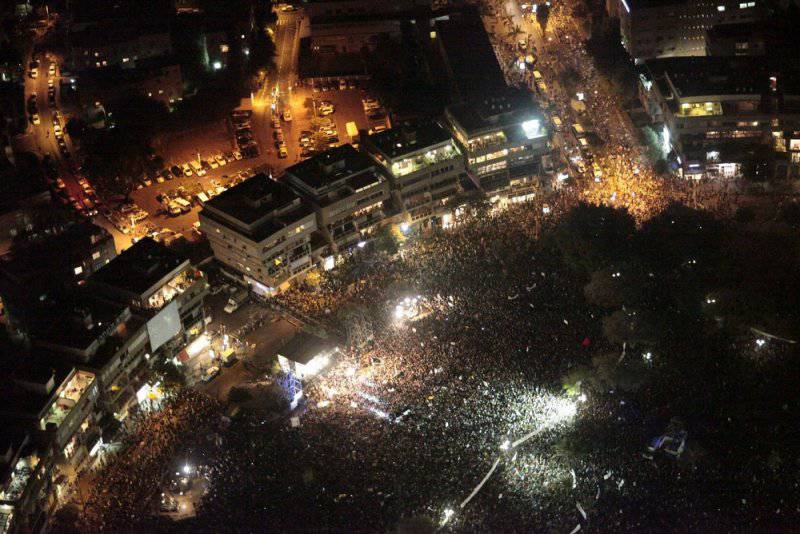 Turkey. The media of the Republic of Turkey reported that Ankara has prepared a new package of anti-Israeli actions. The sanctions against Israel provide for a complete rupture of diplomatic relations with Jerusalem, as has already been done in relation to Yerevan, which accuses the Turkish authorities of the Armenian genocide and demands to recognize the fact of the deliberate destruction of the Armenian people.

In addition, all trade relations between the two powers will be interrupted. Turkey will help the Palestinian Arabs gain world recognition, will not allow Israel into the North Atlantic Alliance and will put pressure on the International Atomic Energy Agency to impose sanctions on the Jewish state for refusing to sign the Nuclear Non-Proliferation Treaty weapons. The condition for the lifting of the new sanctions of Ankara - the apology of Jerusalem for the incident related to "flotilla freedom. "

Israel. Jerusalem, responding to the actions of Turkey, which has recently waged a real diplomatic “war” with Israel, has developed its plan for an asymmetric response. According to the newspaper Yediot Ahronot, referring to sources in the Israeli Ministry of Foreign Affairs, the government is ready to respond to Ankara’s unfriendly policy by playing the Kurdish and Armenian “cards”.

Erdogan (Turkish Prime Minister) should understand that anti-Israeli actions will not remain unanswered, said Israeli Foreign Minister Avigdor Lieberman. This message appeared after the publicity in the press of Turkey, Ankara's new naval strategy, which was called the “Barbarossa Plan”.

Jerusalem plans to respond to Ankara’s actions by strengthening its contacts with the Armenian lobby in the US Congress to help recognize the Armenian Genocide by the Turks, and support Armenia in its unofficial claims to the territory of Mount Ararat (Western Armenia). Avigdor Lieberman should hold appropriate talks with representatives of the Armenian lobby in September during his regular visit to the States.

In addition, Jerusalem wants to expand its ties with the Kurdistan Workers' Party (PKK) - a movement that is recognized as terrorist in Turkey. The Israeli government is considering engaging with the Kurds and supporting the PKK "in all possible areas." For decades, the Kurds have been engaged in armed confrontation with the Turkish army and police, demanding the independence of the south-eastern regions of Turkey inhabited by the Kurdish people.

In Jerusalem, they know how to “be friends” with their neighbors. For the Turkish elite, the Kurdish and Armenian issues are the most painful "blisters".
The march of millions was held in Israel

Marsh of millions in Israel. According to various estimates, up to half a million people took part in the demonstration of social protest. Residents of the Middle Eastern state are demanding changes in the social sphere, in particular, lower prices for housing and essential goods. Mass street actions have been shaking Israel for several months in a row.

Ctrl Enter
Noticed oshЫbku Highlight text and press. Ctrl + Enter
We are
"Trouble" of the Promised Land. African immigration to Israel"Israel is a big pain in America's ass"
6 comments
Information
Dear reader, to leave comments on the publication, you must to register.