Will a residential neighborhood grow on the site of the “Baltic Plant”? 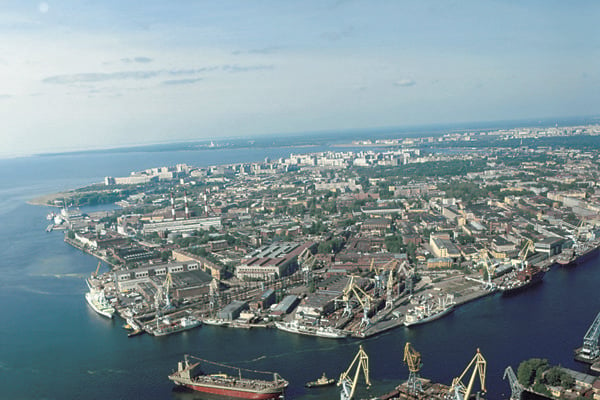 As happened in the new Russian practice, if the situation is close to a stalemate, then no one will help except the President or the Prime Minister. The Prime Minister was forced to turn to the leadership of one of the largest Russian enterprises for the construction of military ships, including aircraft carriers, the Baltic Plant. This unique enterprise is located on the territory of Vasilievsky Island of St. Petersburg. What is the appeal of the general director of the Baltiysky Zavod to Vladimir Putin? The essence of the letter is as follows: the St. Petersburg enterprise remains the only enterprise in Russia that can produce aircraft-carrying cruisers, as well as produce nuclear-powered icebreaker steam generators. Despite all its obvious need for the state, the latter for some reason does not supply the factory with serious orders for the production of warships and other related equipment. In such conditions, as we often have, some construction companies paid attention to the Baltic Plant, or rather to the land on which it stands,. Their leaders already see the new residential complex for several million square meters of housing on the site of the current “Baltic Plant”. Andrei Fomichev, general director of the St. Petersburg plant, is concerned about this increased attention of construction companies.

If we consider the situation in more detail, we can conclude that the interest in the company is not idle. Baltiysky Zavod is in such a state that it causes losses every year. In the conditions of an economically unstable situation, many officials may have an indestructible desire to immediately sell or bankrupt first, and then sell this enterprise. Certainly, the construction of a new residential neighborhood in the northern capital is a very profitable business, and no potential of the Baltiysky Zavod can in any way be able to “surpass” the income from the sale of housing stock. But the matter here goes from the category of general economic to the prestige of the whole Russian defense industry. If the owners of the enterprise decide on the liquidation of the plant, then Russia simply will not have the stocks for building aircraft carriers. Their (aircraft carriers) are now planned to be purchased abroad, and subsequently such purchases will become the norm for our state. If this happens, then our country will have to forget about the status of the Great Maritime Power. Therefore, the preservation of the plant and were concerned in the government circles of our state.

It is worth noting that if the authorities do not pay attention to the Baltiysky Zavod in the near future, then a variant with a raider seizure is possible. Criminal organizations are unlikely to stop before the fact that this enterprise belongs to the regime. With the current level of corruption in Russia, there are no significant obstacles to raiding yet. At the same time, the very laws on public and private property can often be interpreted in two ways, which allows unscrupulous officials affiliated with criminal syndicates to manage the re-issuance of the documentation base of almost any enterprise. In such a situation, the appeal of the leadership of the Baltic Plant to Prime Minister Putin was extremely timely.

Why did the companies that “looked after” the factory land for their needs long ago, were dragged with vigorous actions to liquidate the enterprise? Here it is not only that “Baltiysky Zavod” is a military production enterprise. There is another problem for the "development" of land lying under the "Baltic Plant". This problem is a serious ecological imbalance of the territory. Due to the fact that the plant produced equipment for atomic swimming vessels, the soil under the plant is literally saturated with various kinds of heavy metals, petroleum products and synthetic acids. Even if we assume that residential houses could grow in this land in the future, it would have been necessary to spend several billion rubles only to clean up the territory. In turn, this figure would be infused into the cost of housing on Vasilyevsky Island and would make it the most expensive on the planet. With all this, not every St. Petersburg citizen would have dared to buy an apartment on the ground, where more recently, nuclear reactors for icebreakers were recruited.

Hopefully, thanks to federal support, the Baltiysky Zavod will emerge from such a difficult situation and will begin to produce everything for which it, in fact, was built, namely, for the production of effective Russian Navy equipment.

We are in Yandex Zen
Assemble in parts: how machine tools are revived in Russia
Sberbank translates Russia's defense in foreign offshore?
8 comments
Information
Dear reader, to leave comments on the publication, you must to register.