January 19 2015
6
In 1986, for the first time, China showed its new armored personnel carrier WZ 551 (aka “Type 90” or ZSL-90). The characteristic appearance of this car was the reason for the appearance of suspicion of copying the French car VAB. However, France did not confirm the transfer of documents or finished equipment, and China argued that the new BTR is fully developed on the basis of one of the Chinese chassis with some foreign help. The latter concerned the power plant of the base truck and the new armored vehicle. These units were of West German origin. 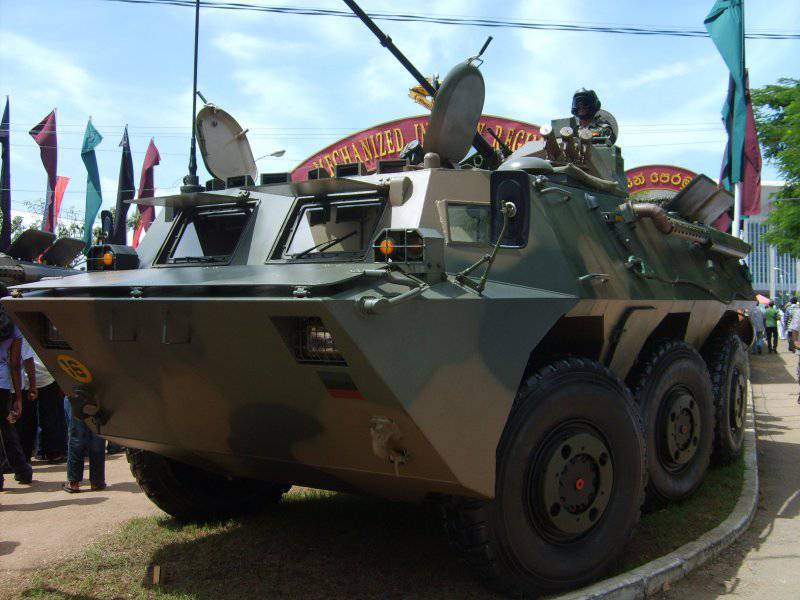 The development of the project WZ 551 started in the early eighties. The purpose of these works was to create a new modern wheeled armored vehicles for the transport of personnel. In addition, the possibility of using such an armored personnel carrier as a basis for other types of equipment was taken into account. In the first half of the eighties, several prototypes of the new machine were built, on which the proposed ideas were worked out. In the middle of the decade, the new armored personnel carrier went into series.

The main task of the machine WZ 551 was to be the transportation of soldiers and their support on the battlefield, which affected its appearance. In addition, in the guise of the Chinese BTR, some ideas that have already been used with foreign technology of a similar purpose are visible. For example, the frontal part of the body strongly resembles the aggregates of the French VAB and armored personnel carriers of the Soviet design.

The armored wheeled armored personnel carrier WZ 551 has an interesting layout. In front of it is located the department of management with the jobs of the driver and the commander. In the upper frontal parts of the body there are two windshields, if necessary, closed armor caps. In a combat situation for viewing used viewing devices located above the glass. Mediums can be replaced with night vision devices. In the roof of the hull there are two hatches through which the driver and the commander can fall into place.

Immediately after the management department is the engine compartment. The units of the power plant are shifted to the left side, so that the right has room for a narrow manhole connecting the control compartment with the fodder habitable volume. In the stern is the troop compartment with seats for 10 fighters. The door for the paratroopers is provided in the stern sheet.

The body of the armored personnel carrier WZ 551 is welded from armor plates of relatively small thickness. It is known that booking a car located at rational angles of inclination provides protection against small bullets. weapons and light fragments. Exact protection level information not available.

Early series armored vehicles were equipped with a diesel engine BF8L413F of the German company Deutz, which was produced in China under license. The structure of the early power plant included a manual gearbox, which had nine speeds to move forward and one reverse gear. In the future, the composition of the power plant changed in accordance with the capabilities of Chinese industry. Used newer engines and automatic transmissions.

The six-wheeled chassis got an independent spring suspension with hydraulic shock absorbers. The wheels of the front axle are driven. For the convenience of the driver used power steering. For movement on water in the stern of the hull there are two jet propulsion. These units are made in the form of propellers inside the annular channel.

The armament of the first armored personnel carrier of the WZ 551 family changed several times. The first prototypes were not equipped with any weapons. Later, they mounted a small turret, reminiscent of the combat module of the Soviet armored personnel carriers. Finally, the machine went into the series with a standard turret for Chinese armored vehicles, on which twin machine guns of caliber 12,7 and 7,62 mm were mounted. In addition, the turret could carry a pair of smoke grenade launchers. Near the turret, on the hatch in the roof of the car, a high armored guard was installed, covering the arrow from bullets and shrapnel. The export version of an armored personnel carrier called the WZ 551F differed from the base by the absence of a shield and a number of some other details.

Almost half of the length of the housing BTC WZ 551 is the troop compartment, located in the stern. It provided space for ten fighters with weapons. For landing and landing troops could use the door in the rear hull sheet, as well as four hatches in the roof. On the sides there were four embrasures for shooting from personal weapons. It was proposed to carry out the search for targets and aiming weapons using periscopic observation devices placed on the roof of the hull above the embrasures.

The first family armored personnel carrier had good mobility. On the highway, the car could accelerate to 85 km / h. Cruising on fuel when driving on the highway reached 600 km.

The delivery of serial armored personnel carriers for the ground forces began in the mid-eighties. Soon, work began on new modifications of the machine, designed to perform various specific tasks.

One of the first appeared police modification of an armored personnel carrier. The machine for law enforcement and the People's Armed Police (internal troops) received the designation ZSL-90WJ. The police armored car differs from the basic version in the composition of communications equipment and armament. In addition, police armored personnel carriers were traditionally painted white and had a black band on the sides.

The ground forces received a WY551 sanitary-evacuation vehicle. In the troop compartment were placed places for one medic and four wounded. To install all the necessary equipment, we had to use a new roof, which increased the height of the habitable volume. For self-defense ambulance got a turret with a heavy machine gun.

By dismantling the tower and installing the crane, as well as a number of other equipment, the WZ 531 recovery vehicle was created. The main task of this machine is the implementation of repair, etc. tasks that require special equipment.

In order to increase the firepower of the motorized rifle subunits, two versions of wheeled infantry combat vehicles were created based on the WZ 551 armored personnel carrier. The first, WZ 551A or “Type 92”, received a new combat module in the form of a single tower of small height. The turret had an automatic 25 caliber mm gun and an 7,62-mm machine gun paired with it. Gun ammunition consisted of 400 shells (200 ready for use and 200 in packing), machine gun ammunition - 1000 cartridges. The gunner-operator of armaments had two periscopic and one combined (day / night) sights. On the cheekbones of the tower there were smoke grenade launchers. The rest of the car is similar to the base armored personnel carrier.

On the basis of the WZ 551 developed self-propelled anti-aircraft systems. So, in the middle of the two thousandth car appeared Yitian. She received a combat module with a set of equipment to monitor the air situation and two packages with four containers of missiles TY-90. For self-defense, a large-caliber machine gun was installed above the commander's hatch. The Yitian radar complex is capable of detecting targets at ranges up to 18 km and taking on tracking within 10 km. TY-90 missiles provide air targets at 0,3-6 km distances at altitudes from 15 m to 4 km. The maximum speed of the intercepted target is 400 m / s.

An interesting modification is the 120-mm self-propelled mortar, the exact name of which remains unknown. On the basic three-axle chassis installed a tower with a caliber 120 mm. According to some information, the used tower is a modified version of the corresponding aggregates of the Russian Nona-S system.

In the early nineties on the chassis WZ 551 tried to install the tower GIAT Dragar French production. This version of the armored vehicle received the designation NGV-1. The French combat module carried an 25-mm automatic cannon, a 7,62-mm machine gun and a set of sighting equipment.

In the early nineties, on the basis of a fairly successful WZ 551, several armored vehicles with a different chassis architecture were created. A shortened version with the wheel formula 4х4, called Type 92B, has appeared. Due to the limited characteristics of this machine could only be used as a carrier of anti-tank missiles. Self-propelled anti-tank missile system HJ-9 carries a tower with a set of observation equipment and four transport and launch containers of missiles.

There was a draft armored vehicles with wheel formula 8х8. The extended chassis was supposed to be the basis for a self-propelled artillery mount with an 122 caliber mm. The gun was proposed to be placed in the tower with limited angles of horizontal guidance.

On the basis of a four-axle chassis developed anti-aircraft self-propelled gun WZ 554, armed with a tower with two automatic guns caliber 23 mm. For several reasons, this project stopped at the prototype testing stage.

Since the mid-eighties, the WZ 551 armored personnel carrier and various vehicles at its base have been supplied by the People’s Liberation Army of China. In addition, some foreign countries showed their interest in these machines. The main customers of Chinese armored vehicles have become small, poor countries that are not able to acquire weapons from the world's largest manufacturers. In particular, this has affected the volume of deliveries. For example, Bosnia and Herzegovina were able to purchase only 10 machines in the WZ 551F version.

Different numbers of armored personnel carriers WZ 551 and other vehicles of the family are used by the armed forces of Argentina, Gabon, Kenya, Nepal, Sudan, Zambia and other countries. The WZ 551 family of equipment was supplied to 17 states. The largest customer was Sri Lanka, which bought 190 armored vehicles of several modifications.

The first version of the armored personnel carrier WZ 551 was created about three decades ago, but such equipment is still of particular interest to potential customers. With an eye on export deliveries, new cars are being created on the basis of a relatively old BTR. So, in November last year, at the Airshow China 2014 exhibition, the company NORINCO for the first time introduced a new car of the family called VN2.

It differs from the previous VN2 technology with a new combat module with an 30-mm automatic cannon, a modified on-board equipment complex and a modified armored hull design. In particular, the number of airborne embrasures of the troop compartment has been reduced. Information on future deliveries of armored personnel carrier VN2 is not yet available.

BTR WZ 551 is not the newest or most advanced type of Chinese armored vehicles, but it is actively used by the troops, as well as being built for supply to foreign customers. In general, this car can be considered a “strong middling”, which turned out to be a very convenient basis for armored vehicles of various types. 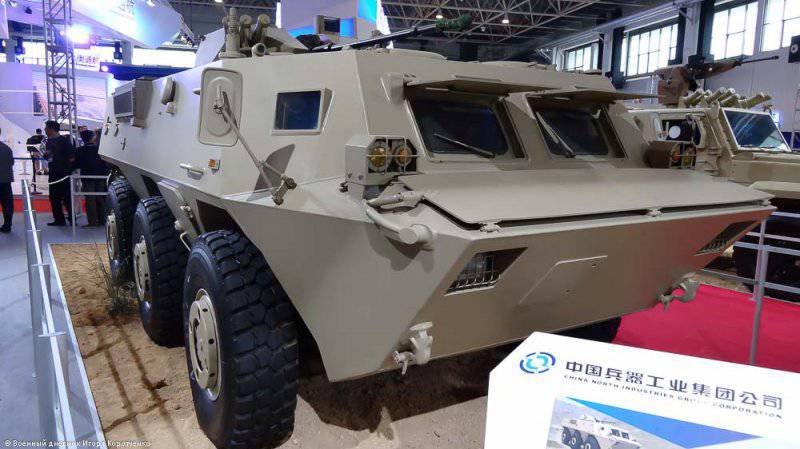 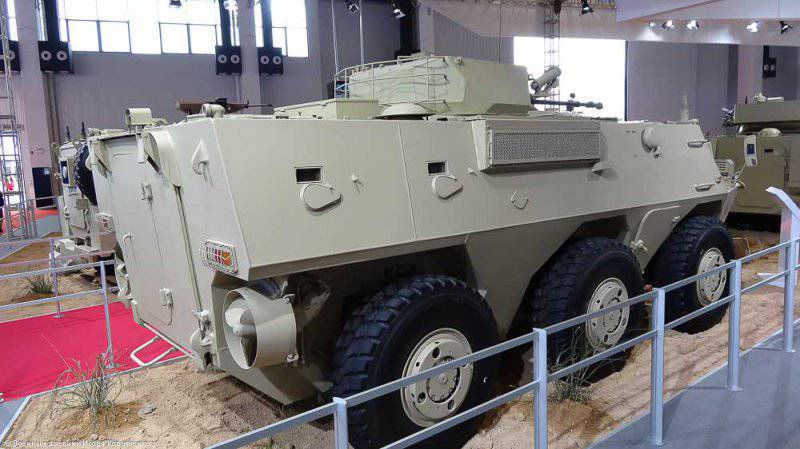 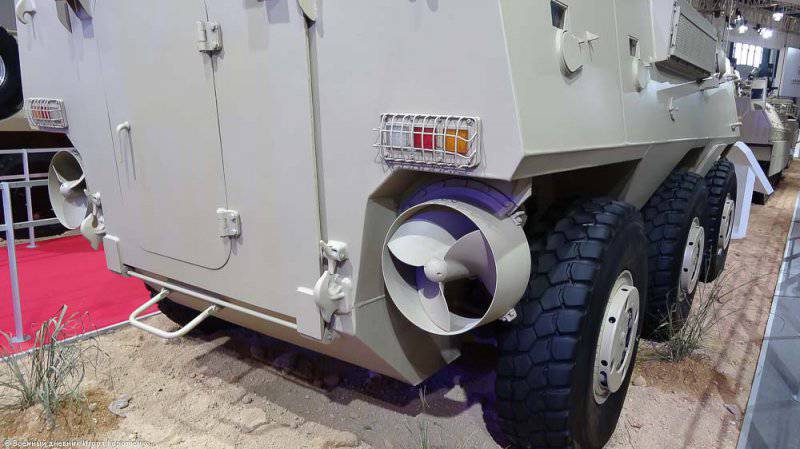 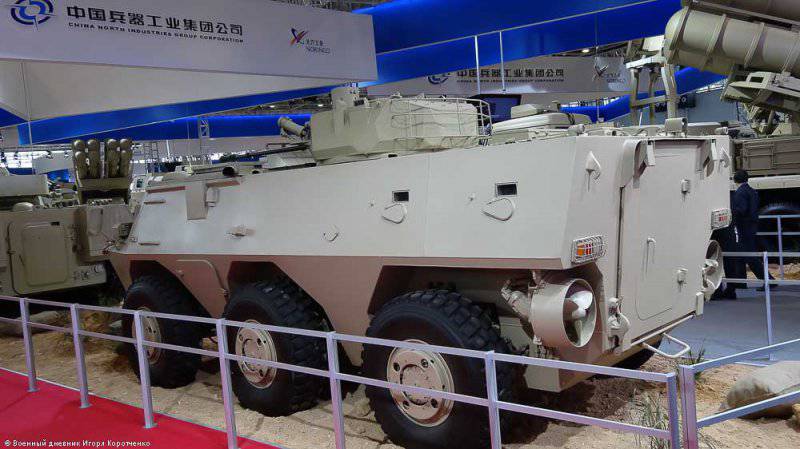 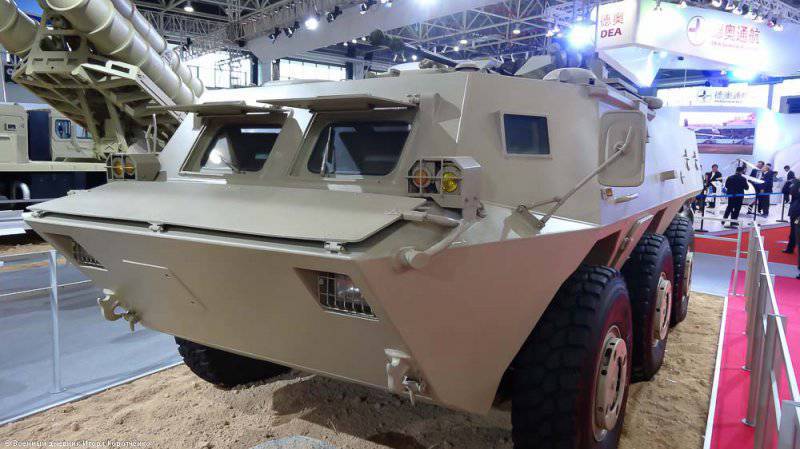