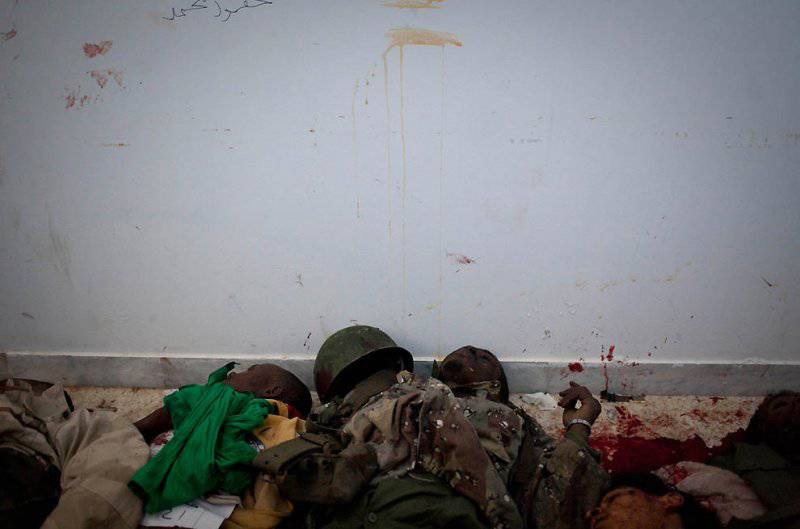 Behind the events in Tripoli and on the coast is somehow not at all visible and not audible about what is happening in Cyrenaica. The place where the insurgency was legalized gained strength and became a springboard for reformatting rebel gangs.


Immediately you can say - apparently, everything is going according to plan. Various forces clashed on the territory of Cyrenaica - and they are waging a war of extermination among themselves. When Gaddafi, these forces were bridled and put in a stall - now feral and brutalized, they cut each other and everything nearby.

The first force - both in numbers and in possibilities - followers of the dark cult of al-Senussi. Bedouin tribes of Obeid and Kharuba. They were the base of the anti-colonial war against Italy — but a peculiar base. They worked for the British crown, were supplied by the British, created support for the British presence. And King Idris became a protégé of the English, and the Order of Senusius was his ideological department of the Central Committee. To put it mildly, the views of al-Senussi and his teachings were shocked even by the faithful - and it is very difficult to call them otherwise than obscurantists. The religious fanaticism of the Senusites was abundantly seasoned with ethnic and racial hostility. Hatred of black and dark-skinned people in general, hatred of Fetsan tribes - and, first of all, Tuaregs, very cannibalistic methods of execution - in general, children can hardly be called kind-hearted and very little fit into the image of a noble desert inhabitant.

Gaddafi’s rebellion and Idris’s dismissal were greeted very favorably throughout Libya, largely due to the fact that King Idris’s reign was marked by a surge of senusitic activity, dark and ferocious Obeid domination — in general, it was not good to love the good king.

Second force Cyrenaica - Islamists Derna, Tobruk, Al-Baida and Benghazi. Historically, the Libyan coast of New Time was a kind of Mediterranean Tortuga. A place where they fled from the hard for their rulers for a free life. Therefore, the coastal Libyan cities became a place of concentration for quite dashing people - and very quickly their differentiation occurred. For example, Misrata, according to one of its names (Misr in Arabic - Egypt) became a place where the Egyptians went for various reasons. The west coast - Tripoli and the strip to Tunisia - became the place where Ottoman soldiers settled. Their descendants became the basis of the modern population of these territories, spreading along the coast to Misurata. The band between Tobruk and Benghazi was the least fortunate - religious fanatics, Salafis, criminal rabble fragments of the great Arab Caliphate, and then the Ottoman Empire began to gather here.

And if, for various reasons, Benghazi and Tobruk became trading cities, and the fanatical rabble was plentifully diluted by the commercial fraternity - also, by the way, not too bothered by the laws, then Derna and Al-Bayda became cities that have been supplying only one product for many decades - terrorists, suicide bombers, assassins. Al-Baida, by the way, is the patrimonial nest of Obeidi, and therefore the Islamists of Al-Baida are mainly Senusits, moreover, Radical-Senusits. That is, compared with these guys, even colleagues from Dern are quiet sheep. One joy - they are few.

It should be noted that the proportion of current Libyan terrorists in relation to the entire population of Libya is higher than the same figure in Saudi Arabia. And you can imagine what the real coefficient is, given that the majority of Libyan terrorists come from these four cities of Cyrenaica. By the way, about 70% of Libyan terrorists are suicide bombers. So you can only assess the degree of fanaticism of these people.

Today Derna is controlled by a kind of triumvirate. The first triumvir is Abdul-Karim el-Hassidi. The proclaimed Islamic Emirate of Derna immediately after the start of the insurgency. Sidel Guantanamo. A graduate of the training camp of Osama bin Laden at Khost. Captured by Pakistanis and handed over to the Americans. After serving in Guantanamo, he was transferred to Libya, however, he managed to tell in an interview not to anyone, but the Wall Street Journal, that he had less 50% hatred for America than before.

The second triumvirom Derna is the personal driver of Osama, trampling the same zone as al-Hassidi - Guantanamo. Sufian bin Kumu (Sufian bin Kumu). I don’t know on what and where he drove the late bin Laden, but he wears the title of driver with pride. In the end, why not? After all, we also had Tractor drivers in Chechnya.

Generally - Guantanamo anyway, but it became the center of recruitment - more precisely, recruiting - of many brave guys now known and well-known. In Yemen, for example, the children of Al-Qaida under the command of a certain al-Shikhri are rushing in with might and main - and also, surprisingly, a graduate of Guantanamo. Not a prison, but some kind of Frunze Academy.

Third force Cyrenaica - although it has nothing to do with all Cyrenaica, but rather only with one point on its map - Benghazi. City bengaziyskaya gopota. Jackals night streets.

Take, for example, the Kazan guys from Hadi Taktash, Uralmash, Solntsevo, the Chelny 29 complex of the times of their loud glory and put everyone in one city. Give them unlimited any (underline with red - any) weapon and remove from the streets any hint of law enforcement. You will get the faint shadow of the current Benghazi.

Even in the spring, even the most pro-Western journalists wrote about the strangeness of the revolutionary militia patrolling the city and suggesting a revolutionary order. Young revolutionaries willingly talked about Gaddafi hirelings, whom they pick out nightly from their homes and administer revolutionary justice over them. About the fight against the criminal element that flooded the city, the militia squads were told confusedly and more and more with hearsay.

A shaft of crime swept over Benghazi, Tobruk. Ajdabiya is reportedly no better now.

Finally, the fourth force Cyrenaica - unknown people passing silently in transit to the west. They appear from nowhere and disappear to nowhere. Local disassembly does not interest them and does not concern - but judging by the few reports, for these people any living creature is larger than a desert wombat, coming up at a distance of a shot - an enemy that is subject to immediate extermination. Apparently, it is these people who are the inexhaustible resource of the rebels for waging a desert war. Afghans, Pakistanis, Arabians, Iraqis - it is difficult to understand what kind of public, but it is she who is fighting in the West today. Apparently, the recruitment in Mazar-i-Sharif, which almost completely fell in Tripoli - this is not the only replenishment of the PNS troops.

Here is such a revolutionary romance in the East. It’s not for nothing that the PNS rushed out, like the devil from incense. It is interesting if revolutionaries managed to spoil so much in six months that they couldn’t be there, what did they get from their neighbors, to whom they broke in without asking?

We are in Yandex Zen
Hitler's loyal followers
About Stalin and Khrushchev
2 comments
Information
Dear reader, to leave comments on the publication, you must to register.