Oil. The fire is on fire. Bid on 1 trillion dollars. 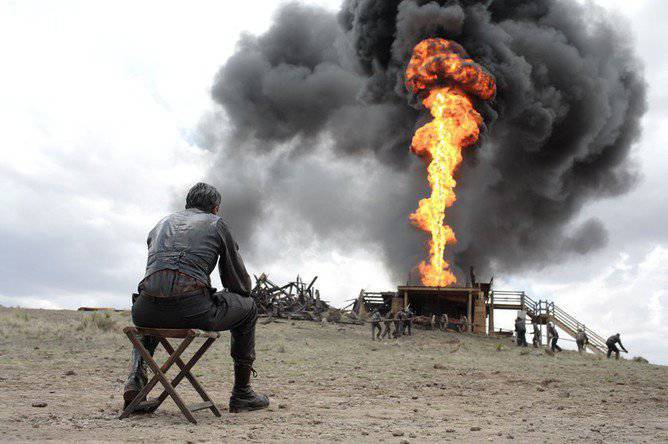 Foci of fire around the world flare up with unprecedented speed and intensity. The world is on the verge of great upheaval, because The system is being tested for rupture in full, trying to protect its hegemony.

The political conspiracy of the United States and Saudi Arabia for the forced collapse of oil is obvious and no one doubts. Each side has its own purpose.

Saudi Arabia is trying to clear the glade (by taking market share) from the weakest and most unstable participants — first of all, to intercept the African market share (Nigeria, Libya, Algeria) and to clear the Persian Gulf (Iran). This is the case when, shooting a leg in yourself, you hope to grab a fatty piece in the future. And maybe not grab, then how come ...

Saudi Arabia is not involved in the collapse of oil prices, and its role is to keep production at any price and prevent oil shortages in the market, playing a dominant role in OPEC. And the OPEC rules prohibit unilateral change of quotas without coordination with other participants. Saudis are denied access to the international market, where the pricing of oil contracts takes place (this is done by European and American structures).

The tales that the Saudis are acting against the United States, trying to dislodge shale projects, are untenable. Between the USA and Saudi Arabia the most powerful in the world stories military strategic alliance, therefore, no political decision, and even more so important in the energy market does not occur without the approval of the curator (US). Before starting to act independently (sovereignly), the Saudis must expel the entire American intelligence network from their country, which obviously is not happening. So I propose to leave nonsense about the plot of Saudi Arabia against the United States. Nothing like this. This is a concerted action.

Also complete nonsense is the statement that there is an oversupply in the world. As already mentioned before, they produce exactly as much as they have contracted. No more, no less in the long run. Of course, there are times when they mine more than they bought, i.e. oil producers form oil reserves, but these opportunities are limited to oil storage facilities (which are very expensive), and this practice itself is seasonal (repeated from year to year). Now the situation (in the balance of supply and demand) is absolutely no different from what it was a year ago or 10 years ago. The fact that they began to produce more is true, but the demand has grown strongly due to Asia in the first place.

The graph shows the dynamics of oil production and consumption by January 2015. The indicator is volatile, but production inevitably follows consumption. 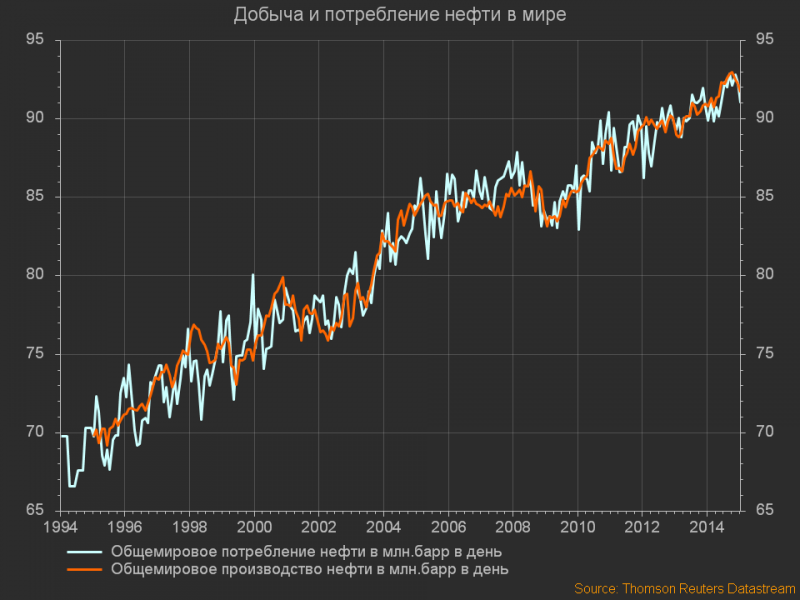 The fact that the capacity utilization fell somewhat due to the fact that additional capacity from the USA appeared on the market at 4.5 million barrels - this does not affect prices, but only on future investments of companies. Moreover, the drop in US demand was intercepted by Asia, so that OPEC exports as much as 3 a year ago with the price of oil in 120.

Another journalistic delusion is the statement that China is slowing down and has stopped buying oil. According to the data of the customs structures of China - in December there were record in the whole history of China purchases of oil in physical terms in thousand tons. Details on the chart. 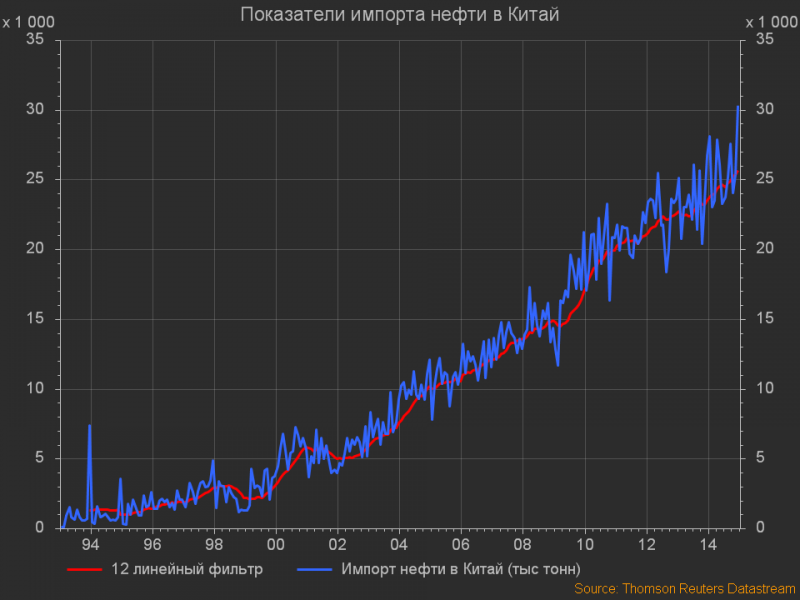 Also, a record volume of purchases per year. China is actively stocking up cheap oil, while giving.

The collapse of oil itself is directed by American politicians and cartels and controlled by American trades operators, as well as the forced rally of the stock markets of developed countries (to “fix” the balance of the right boys), with the simultaneous deprivation of the commodity group, especially the precious metals market ( so that the most ambitious QE runs smoothly without undermining the balance of the system and confidence in the dollar).

The US is playing on a larger scale. The United States sacrifices its energy sector, making a bet "for everything". The task is to crush and tame the obstinate - Russia, Venezuela, Iran. Three in one. Act simultaneously from all fronts.

Why Russia, Venezuela, Iran? The answer to this question is in the table below. 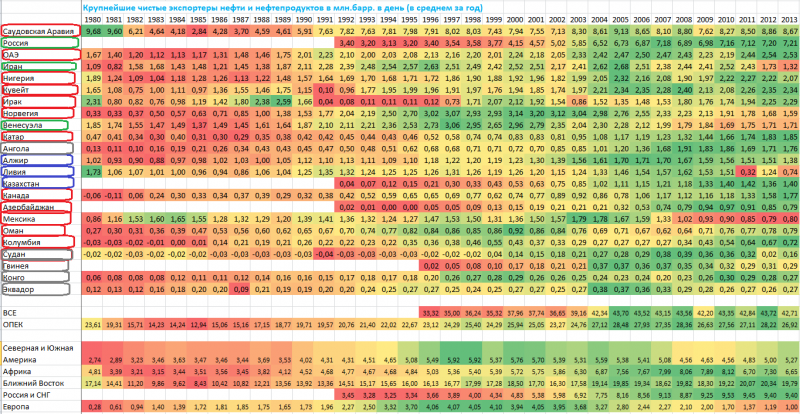 Consumption and production of oil in the world exceeds 92 million barrels, about 43-45 million barrels (that is, almost half) are involved in foreign trade operations. The United States holds, directly or indirectly, all key players with the exception of Russia, Venezuela, and Iran. For the full 100% control over strategic energy trade flows, there is a lack of a final touch.

It is worth explaining. Despite the “despotic bloody tyrant”, Nicolas Maduro (president of Venezuela), the United States is quite well supplied from Venezuela to 340-360 million barrels per year (now less than 280 million due to the development of production in the US). Those. one million barrels a day or so.

Political fuss remains political fuss, and business remains a business. But the United States has failed for many years to establish sufficient control over the oil production of Venezuela, regulate the volume of production, supply, profits and pile up the oil market in Venezuela.

The United States does not like this, so Venezuela is traditionally proclaimed as an undemocratic country, with a lack of freedom of speech and civil rights. Also, traditionally, the United States is trying to conduct unrest in Venezuela, organizing attempts to state a coup. This happens so often that everyone has long gone astray. The last large-scale attempt began at the end of 2013 and continues to this day with varying intensity. The ultimate goal is the overthrow of the government and the establishment of the American puppet with the American dictatorship followed by the privatization of all the significant resources of Venezuela into the hands of the United States.

In Venezuela, a huge problem. Official inflation exceeds 60%, but unofficial inflation for vital groups of essential goods amounts to hundreds of percent. The country has a chronic shortage of products, medicines with a steady trend towards rising unemployment. According to my calculations, the real purchasing power of household income (low income) from 2011 to 2014 fell more than twice. In the structure of exports of goods, oil in Venezuela takes up over 93%. In fact, all exports are oil, so the dynamics of exports are almost identical to the quotes. But actually worse. Since Venezuela is losing more physical volume due to the fact that the United States began to buy less. Details here.

Venezuela has an external government debt in 110 billion dollars, and almost 100% blocked the capital market (can not borrow on reasonable terms), almost completely tied to oil exports and state budget, exorbitant social obligations and upheavals in the economy. The prospects are bleak, and with the price of oil in 45 bucks, the fall of Venezuela is a matter of time.

Do you realize that the US is playing a break?

Although the American agent network is spread all over the world and is represented, including in Russia in almost all echelons (which is only the Central Bank of the Russian Federation), however, Russia's actions in many aspects are contrary to the general foreign policy and foreign economic doctrine of the United States. It also does not like the United States. Everybody knows the chronology of pressure on Russia, so I will not waste time. I also write a lot about economic conditions.

Iran. The attack on Iran began in 2011, intensified in 2012. Sanction pressure is extremely strong (much stronger than in Russia). A complete trade embargo among US satellite countries + blocking of accounts + complete closure of capital markets + ban on cash settlement services in vassal countries of the USA. The consequences are very serious. Although Iran is held mainly by supporting Asia, prices in 45 can knock the “saddle” out of Iran.

So far, the stability of Iran and Russia is quite high, and the weak link is Venezuela. That she can go first.

The consequences of the collapse in oil prices can be very large.

This is the funeral of the entire alternative and green energy (at such prices it is simply not profitable to deal with it).

This is a multiple decrease in investments of oil and gas companies, and these investments occupy a very significant share in the economy of all countries of the world. For example, in Russia they are about 60% of the total extractive and manufacturing production. Moreover, oil and gas investments have a multiplier effect, because affect oilfield services companies, engineering, electrical equipment, the metallurgical industry and many other industries, and they, in turn, other industries, and so the chain. Oil and gas investments have the highest multiplier, even higher than in the construction industry.

This is the pressure on jobs that are almost always highly paid, i.e. the middle class and the wealthy class of the population, and this is a blow to the purchase of durable goods, tourism, real estate and so on.

This is the inevitable massive and large-scale bankruptcies of energy companies.

According to my calculations and sources, when the price of oil in 45 dollars becomes unprofitable (subject to the average price per quarter at the level of 45-50):

-95% of shale oil and gas projects (over 65% of shale projects were on the verge of profitability with the price of oil in 110, and now all the more);

-more than 75% of oil which is difficult to recover;

For example, Rosneft, with average oil prices above 105, more than half of the revenue was taken by the state (export duties, MET, excise taxes, other types of taxes). The total cost of production and sales of oil from Rosneft is about 35 dollars per barrel (ie, exploration, drilling, maintenance, administration of the entire structure of Rosneft, payment for oilfield services companies, depreciation of fixed assets, oil transportation and final sales). The extraction itself costs no more than 7-10 bucks. This is at inflated costs. If you tighten the belt, then you can keep up with the 25-27 bucks. But without taxes. And so with the price of oil in 50 bucks (annual average), all of our oil and gas is unprofitable, completely. The same applies to more than 80% of US and European companies.

As for the subject consequences of the fall in oil prices (energy balance, company profitability, sectoral transformations) - this is a separate, very, very capacious topic. Another time somewhere in the future somehow another time sometime later.

The United States involved in the confrontation with Russia half the world. In direct confrontation 33 countries (EU + Japan + Canada + Australia + Switzerland + Norway). The loss of exporters' incomes from the collapse of prices from 105-110 to 45-50 is about 1 trillion a year. Those. we can assume that the United States has priced 1 trillion dollars for the heads of Putin, Maduro and Rouhani, putting at risk almost all of their shale industry into bankruptcy. Understand the scale of rates? There is a reflexive hand to nuclear arms not stretched ...