PPS-43 - weapon that broke through the blockade of Leningrad 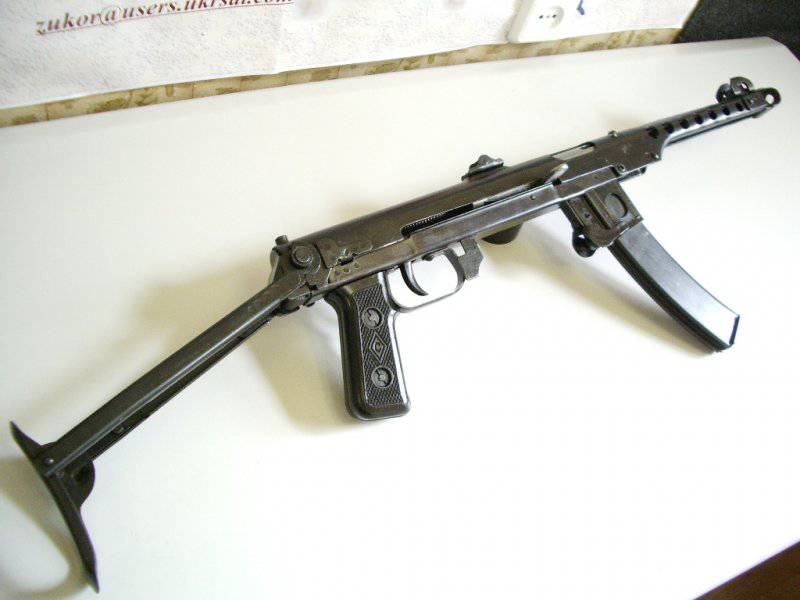 Technological, reliable and easy, compared to others, Sudayev’s submachine gun can be called one of the main military developments during the years of the Great Patriotic War. Created for the Leningrad front, the PPS-43 for a long time became the armament of the assault squads of the Soviet army up to the 1950-s, when it was replaced by a Kalashnikov assault rifle.

The first model of the legendary Sudaev submachine gun was created in 1942 in the besieged Leningrad. It was at the time when people were knocked down from exhaustion, except for food in the city there was not enough equipment and good specialists - most of them were evacuated outside the Urals. Therefore, not trained people got to the machines, but ordinary people. The main reasons why the Sudadev submachine gun was put into mass production is a relatively small amount of metal needed, its production speed and the fact that such high-tech equipment that was used to produce the popular PCA-41 was not required. The manufacture of one unit of PPS-43 cost the country in 6,2 kg of metal and 2,7 man-hours. For the already mentioned PPSH-41, these figures are equal, respectively, 13,5 kg and 7,3 man-hours. 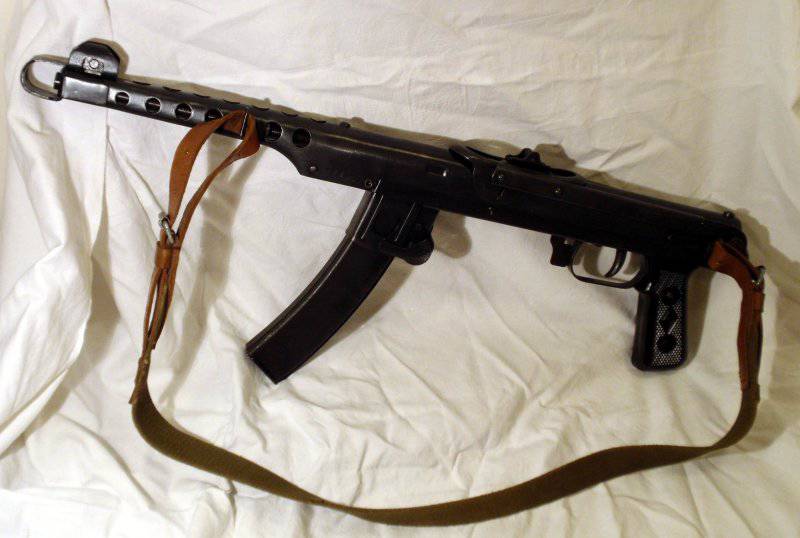 Who was the creator of the PPP-43? Alexey Ivanovich Sudaev was born in 1912 in the Chuvash ASSR. Some time after graduating from vocational school, he works as a mechanic, then graduates from the Gorky Railway Technical School and works for some time as a railway technician at the Soyuztransstroy, where his talent as an inventor begins to emerge. The first copyright certificates were given to Sudaev for the “Pneumatic tipper for self-unloading platforms” and “Anti-theft”. While serving in the ranks of the Soviet army, the future author of PPS-43 was engaged in repairing various weapons. And after the army entered the Gorky Industrial Institute. Two years later, he began to simultaneously receive higher education in the Artillery Academy of the Red Army. F.E. Dzerzhinsky, enrolling immediately in the third year. A graduate of the 1941 year defended a diploma on the subject of weapons, presenting the anti-aircraft installation of his own design to the commission. 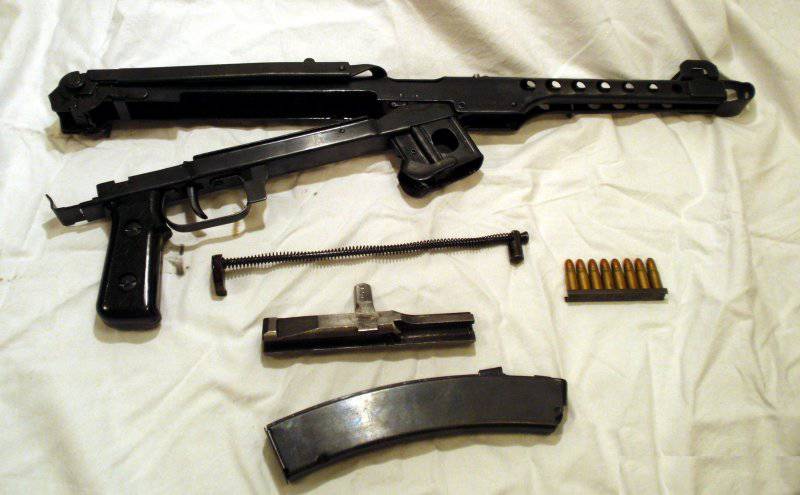 And yet, during the Great Patriotic War demanded from Sudayev not a new anti-aircraft installation, but an automatic submachine gun. Twice held a competition for its creation, which was attended by eminent masters of weapons cases, but still won the development of Sudayev. The first, made according to the drawings of the prototype, submachine guns were produced at the Sestroretsk tool factory and were required primarily on the Leningrad front. About 50 000 weapons were released under the name “Soudaev submachine gun arr. 1942 g. The deficiencies identified in the first model were eliminated, so PPS-43 appeared, which entered service with the entire Red Army. 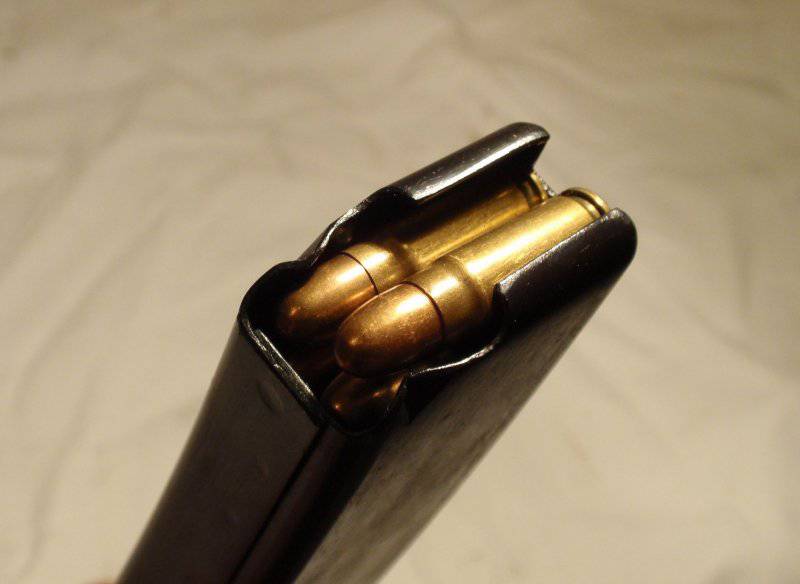 PPS-43 served as weapons for reconnaissance aircraft, armored vehicles, paratroopers and gunners. This was due to factors such as a folding butt, which reduced the length of the weapon, its weight, almost two times less than that of the PCA, and, strange as it may seem, the low rate of fire - 650 shots per minute at a combat rate of 100 shots a minute The fact is that the PPSh had such a high rate of fire that it could fire around 1000 cartridges per minute. It is not easy to carry around a large amount of ammunition, which he spends so fast. Yes, and jammed PPS-43 much less often, thanks to a different design of the magazine and the patron of the cartridge from the magazine to the chamber. From PPS-43 it was possible to shoot even with single shots, this required some experience, but the fighters could send only one bullet if they had time to release the trigger immediately after pressing. This submachine gun does not have a special translator for single fire. 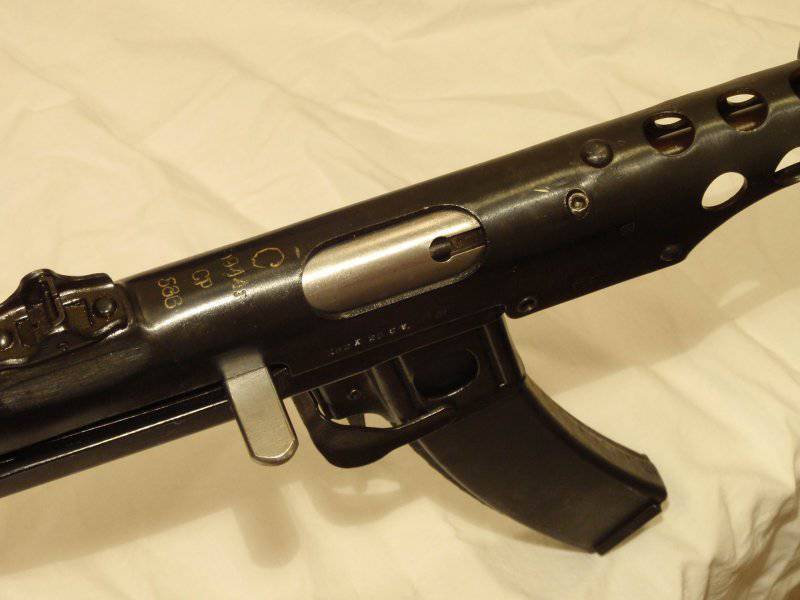 Sights PPS-43 - this is a front sight and a sight with a fully rotating. The initial speed of the bullet is 500 m / s, the target shooting range is possible at a distance of 200 m, therefore there are two divisions on the target - 10 and 20, that is, 100 m and 200 m. However, the destructive power of the bullet keeps at a distance of 800 m. The most accurate shooting is achieved with short bursts from 2 to 5 shots, the longer the turn, the greater the spread of bullets. To increase the accuracy of hits, there is a compensator in the front part of the barrel, it is the muzzle brake. 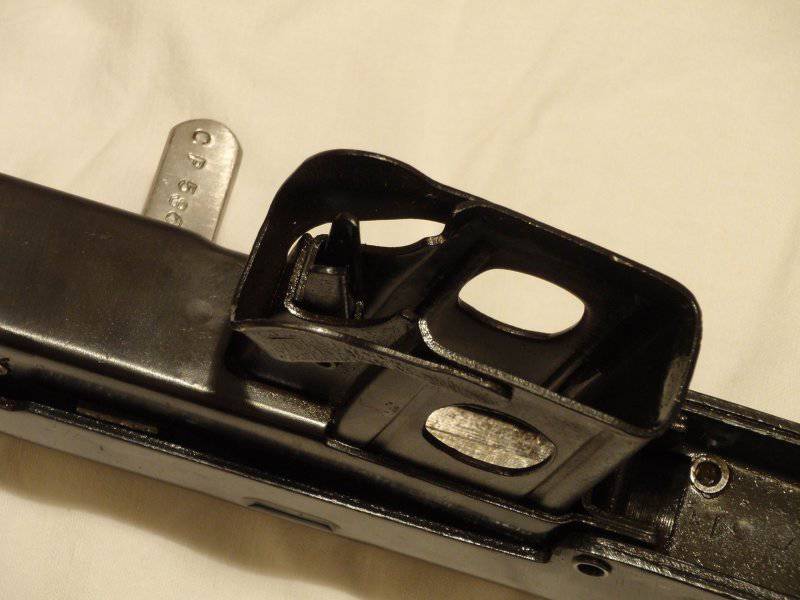 In order to avoid accidental shots, PPS-43 is equipped with a figured fuse plate. The metal butt leans back when firing, if there is no time for this, you can shoot using the pistol grip. Sector shop is designed for 35 cartridges. The weight of the submachine gun with six related stores is 6,72 kg, which roughly corresponds to the weight of the Suomi submachine gun with only one magazine. The caliber of cartridges used is 7,62 mm.

The reliability of the PPS-43, quick and easy manufacturing, low need for metal - all this was the fact that the Soudaev submachine gun was produced with minor changes by very many countries. Their analogues PPS-43 appeared in the Finns, Poles and Chinese. The Germans did not even remake the PPS-43 for their cartridges because of their reliability and the large number of captured Soviet cartridges. When in Germany the shortage of metal and manpower began, another clone of the Soviet submachine gun came into production. 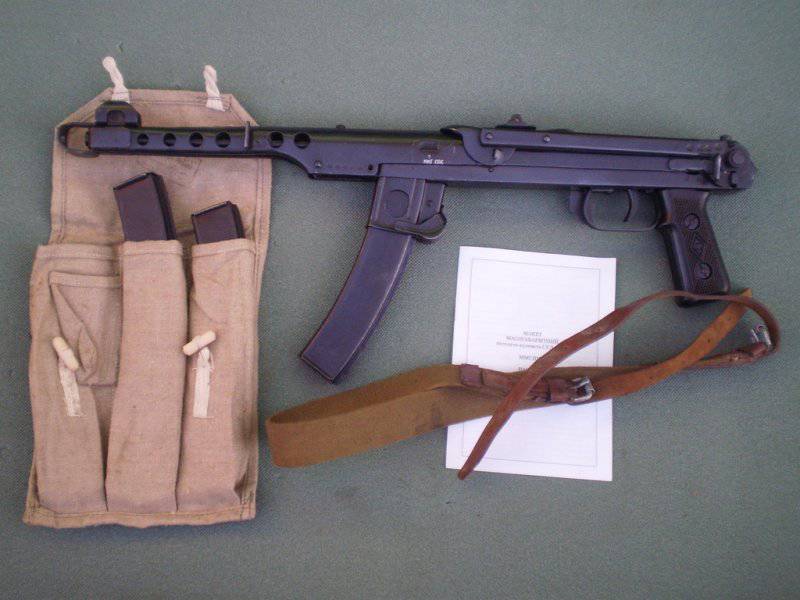 PPSH was not discontinued and completely replaced with PPS-43 just because the production was already established and during the war years did not risk redirecting the activities of the plants. For all the years of the war, about half a million PPS-43 units were manufactured. In the postwar years, a large number of them received friendly armies of China and North Korea. The last, the seventh model of the Sudaev submachine gun, developed after the creator's death, continued to be produced in Georgia back in the 1980s.

And finally - the opinion of the modern user. Light as a feather, compared to other submachine guns, quite comfortable. The only problem - the snow falling into the radiator slots was solved by shaking out. Trouble-free operation at minus ten degrees. Not too comfortable for hands in army winter gloves fuse. It is also not very convenient, but a folding and strong metal butt. Simple sight. Well-mounted shop - easy to change, hard to lose. So the thing is just great. This is evidenced by the fact that it was adopted by several countries.

Ctrl Enter
Noticed oshЫbku Highlight text and press. Ctrl + Enter
We are
Rivals Shpagin submachine gun. Part twoFor all types of troops
29 comments
Information
Dear reader, to leave comments on the publication, you must to register.