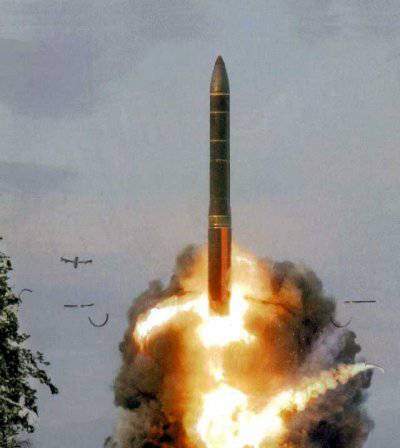 Either in response to Washington’s reluctance to abandon the deployment of a European missile defense cluster, or as a test of the reliability of long-range missiles, one way or another, a few days ago, the Topol missile warhead successfully hit the target in the Kamchatka Peninsula.


Twenty minutes after launch, a new modification of the warhead demonstrated what it can do. Despite the fact that the most neglected Topol this year was 23, the warhead carried by the missile can be called an innovation by Russian military designers. If we talk about the notorious American missile defense, it is mainly designed to destroy ballistic missile blocks, the trajectory of which can even be calculated by a schoolboy. The new maneuvering warhead is capable of “confusing the cards” to the Americans not only by its intricate trajectory, but also by the fact that it contains so-called “dummies”. These are ordinary metal or composite discs that will be perceived by the enemy’s antimissiles as full-fledged warheads and disorient the entire missile defense system. It can be considered that this is quite an effective asymmetric solution as opposed to American radars in Poland and Romania. A good Russian proverb says that there is no reception against scrap, if there is no other scrap. So the Russian military manufacturers decided to “surprise and please” the US military with a new “gift” - a new “scrap” in the form of ICBMs.

It is worth noting that the successful launch of a Topol class rocket shows that even the Soviet weapon, despite its solid age, can tickle the nerves of the West. In connection with the recent insinuations of the American side about the unwillingness to either suspend the deployment of missile defense or even completely close the project, Russia has demonstrated that even if such a system appears in Eastern Europe, it will not pose any threat to maneuvering missiles of new types .

Representatives of the Russian military department say that in comparison with the previous generation of warheads, the new ones have become much more accurate. The error when such a nuclear weapon hits the target is no more than a couple of tens of meters from a distance of more than 5000 km. This “behind the eyes” is enough to destroy any potentially dangerous object in the territory of the alleged enemy.

Western media immediately dubbed the launch of Topol from the Plesetsk cosmodrome by an action that could provoke a spiral arms race. At the same time, as usual, any military initiative of the western side is, for obvious reasons, not considered to be such a spiral. For our country, such a position of foreign “colleagues” has long become commonplace, so no one pays special attention to it.

In this case, I just want to note that the current US president, even at one time, was actively involved in pressing the famous “Restart” button. However, no reboot, if to speak, did not happen directly, as well as Obama’s promise that, they say, the missile defense system will not be deployed, was not fulfilled, the American troops would come out of Afghanistan and Iraq. It turns out that in a strange eye, as always, these citizens see the mote, and they stubbornly do not want to notice their logs. Let in this case not something but the intercontinental Topol with new BBs will play the role of that mote.
By the way, the new BB, of course, will not be placed on the old "Topol". They are designed to be equipped with "Yarsy" and "Bulava". However, so far the tests of the Yarsov are not carried out, and the development of the shock force of the BB can be fully implemented on the good old Topol. Here he is such a "poplar" boo ...

We are in Yandex Zen
Missile attack on Europe: myth or reality?
Transportation and loading into the mine of an intercontinental ballistic missile of the 5 generation rocket complex RT-2PM2 Topol-M
31 comment
Information
Dear reader, to leave comments on the publication, you must to register.