Great army and its opponents 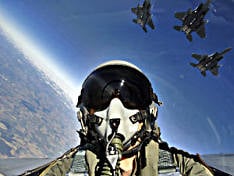 So, Gaddafi’s regime has fallen. It should be noted that the Libyan army remained combat-ready until the last moment. "Killed" her fatigue and internal strife rather than NATO air strikes: Western aviation acted in "greenhouse" conditions - Libyan air defense was practically inactive, and the terrain was ideal for the use of the Air Force. And still, the bombing would not have made it possible to achieve final success, if the ground forces of the rebels did not participate in the hostilities.


In other words, despite the achievements of the opponents of Gaddafi, the conflict in Libya has dealt another blow to the theory of contactless wars (which, by the way, has been around 500 years), rather than adding arguments in its favor. Back in the 1490s, there were predictions that battles would soon be reduced to gun fights. As it is not difficult to notice, this has not happened yet. It seems that modern theorists, either dreaming of complete “contactless” or insisting at least on the absolute priority of the Air Force in relation to ground forces, also run ahead of the locomotive. Indeed, in all recent conflicts, the Air Force demonstrates an absolute inability to independently defeat ground forces, even if the enemy has practically no air defense.

The most famous example is the NATO bombing of the Serbian forces in Kosovo with massive destruction of mock-ups and by no means so total losses of the Yugoslav army. In addition, during the second Lebanon war, despite the oath promises made by the Israeli Chief of Staff Dan Halutz to crush Hizbullah with air strikes, the Israelis had to conduct a ground operation. Finally, the idea of ​​the first Iraq war (“Desert Storm”) as a triumph of aviation also does not correspond to reality. In this case, the Air Force then acted in conditions close to the ground. Iraqi troops were located on a flat plain devoid of vegetation. Iraq’s air defense was impressive, but Saddam used it to cover cities and military installations in the interior of the country, and the positions of Iraqi troops were not covered by coalition aircraft.

Air strikes continued 38 days, the number of sorties sometimes reached 2-3 thousands per day. By the time the ground operation began, the Americans were firmly convinced that the Iraqi losses were at least 50%. February 24 launched an offensive on the ground, and within five days the half-million Iraqi group was literally torn to pieces. This gave rise to the myth that all the work was done by aviation. However, as it turned out during the "debriefing", the losses of the Iraqi grouping from air strikes at the "contactless" stage amounted to only 18%. The Iraqi army was killed by ground forces with the support of aviation, and not by any independent actions by the Air Force. The Americans realized this fact quite well, and the claims of aviators for a leading and guiding role were rejected by the committee of chiefs of staff.

By the way, the already mentioned Yugoslav conflict became non-contact ... with grief. The Americans planned a ground operation in Kosovo, but the NATO allies did not support them, and the independent operation looked "politically incorrect." The result was that it turned out - despite the rather massive use of UAVs and the latest intelligence tools.

However, the Americans were able to benefit even from dubious Kosovo exercises. Legends and myths about a new era of purely contactless wars made an indelible impression on the broad masses of "military experts" who suddenly believed in the secondary nature of ground forces, unnecessary tanks and the omnipotence of "high-precision systems." The slogan “there will be no second Kursk arc” has become a commonplace. Meanwhile, the Americans were not at all going to believe their own propaganda, and for some it came as a surprise: during the second Iraqi Baghdad leadership assumed that the fighting would go according to the “Desert Storm” scenario, and was preparing for lengthy bombing - and instead across the border immediately rushed "Abrams".

Thus, the era of contactless wars is over, without really starting. As it turned out, the effectiveness of aviation against dispersed and disguised ground forces, even in near-ground conditions, is rather low. Moreover, the relative effectiveness of aviation compared to the period of the Second World ... has decreased. 1939-45 dive bomber was, in fact, highly accurate weapons - for the miserable air defense of that time allowed aviation to literally “walk over their heads” and bomb point-blank. The bomb load was limited — but it was pure iron and explosives. At the same time, the number of aircraft at that time was comparable to the number of tanks: the bomber, fighter and tank cost about the same. Heavy bombers effectively "demolished" entire cities - due to the same weakness of air defense.

However, now even just small-caliber anti-aircraft artillery and MANPADS force tactical aircraft to stay at medium altitude — which forces them to use much more sophisticated weapons and ammunition, equipped with heavy and expensive “additions”. Where air defense is more serious, aviation has to use long-range missiles, which are expensive and carry relatively little explosives in relation to their own weight. Thus, modern tactical aviation, although superior to WWII aircraft, is not as good as it is customary to think. At the same time, the ratio of the cost of airplanes and their main goals changed radically: if a tactical aircraft of the Second World War was in general “equivalent” to a tank, now it costs an average of ten times more, even if you don’t take some sort of Raptor type exception.

Equally, strategic aviation has little ability to repeat feats such as Dresden, Hamburg and Coventry. Even the ephemeral Yugoslav air defense proved enough to force the "non-mustered" bombers (B-52) to keep out of its range, reducing their function to platforms for launching "Tomahawks." Meanwhile, long-range cruise missiles are an extremely expensive “device”, in no way adapted for truly mass delivery of explosives to the enemy’s head. Stealth bombers capable of effective strikes at close range are extremely expensive, and there simply cannot be very many of them. As a result, the armada of airplanes, which ironed a small Yugoslavia, achieved rather modest successes - the infrastructure was seriously damaged, but was not torn apart.

If the rumors about the omnipotence of aviation are greatly exaggerated, then what is the reason for the spectacular victories of the Americans over the regular army of Iraq? During the second Iraqi, their role was played by sanctions, which destroyed the military vehicle of Saddam Hussein, dependent on the import of military equipment, spare parts and ammunition, and trivial betrayal. However, in the case of the “Storm in the Desert” these explanations do not pass.

The Iraqi group was well-armed for those times, the backbone of the army had eight years of military operations with Iran and was not at all a cowardly rabble - the elite divisions of Saddam showed more hopeless valor than indifference. The usual mechanized division that occupied the Saudi Ras Khafju, stubbornly kept there under the bombs and artillery strikes. At the same time, the advancing coalition troops outnumbered the defending Iraqi group by only one and a half times, and this superiority was formed at the expense of the Arab allies of the United States, which were much inferior to the Iraqis in combat capability. However, the Iraqi army was defeated almost instantly.

The popular explanation of this fact is that the Iraqis were simply bombed into the ground, while the ground forces of the coalition only have to clear this ground. In fact, the scheme of American military success looks like this. Air strikes or the threat of these strikes cause the enemy’s ground grouping to disperse. The effectiveness of air strikes becomes low - but this dispersion paves the way for ground forces hitting the "sprayed" and forced "pressing ears to the ground" enemy (the characteristic rarefied building of the Americans is due to the fact that they were attacking the already "sprayed" enemy) . The impact of the ground forces, in turn, forces the enemy to concentrate, move and "light up" his troops - and aviation effectively hits them. As a result, we see a “car” that can really grind anyone.

However, it should be borne in mind that this scheme works smoothly as long as the enemy’s air defense is weak. If the enemy has powerful air defenses, dispersion will not be urgently needed, and the effectiveness of air strikes, even in the context of a ground attack, will not be supernatural, which will further increase the role of ground forces. And it will turn out the Kursk Bulge - dense military formations, massive tank battles. In other words, clashes between relatively equivalent opponents will resemble the “big” Arab-Israeli wars 1960-x-1970 rather than the Yugoslav “contactless” pogrom.

In this context, the modernization of ground forces is at least as relevant as the modernization of the Air Force. However, the "ground" in the framework of Russian weapons programs still look like poor relatives of aviators. For example, the T-95, capable of becoming a truly formidable competitor for Western tanks, was rejected as “too expensive” - the Defense Ministry was reoriented to a more budget platform.

Meanwhile, the secret of US success is not in the unambiguous rate on the Air Force. He is in the presence of an extremely balanced army, in which huge air power is complemented by very formidable ground forces. At the same time, it is possible that sooner or later Russia will get involved in a regional conflict with active players in the post-Soviet space of the United States — and it would be nice to be ready for this.