One of the best examples of "silent" weapons The period of the Second World War is considered to be the British "De Lysle Commando Carbin" (De Lisle Commando Carbin - remember that the units of the English "Commandos" began to form in 1940). It is interesting that this carbine was developed on a proactive basis by a private person. William Godfrey De Leisl worked in the British Ministry at the beginning of World War II aviation. Even at the age of 16, carried away by weapons, he and his friends developed the design of a silencer for a sports rifle under a 5,6-mm .22 LR ring-ignition cartridge. With the outbreak of war, he returned to his idea and proposed a “silent” 5,6-mm weapon based on a self-loading Browning carbine. In 1943, already working as an engineer at the Ministry of Aviation Industry, he patented a silencer for a 5,59-mm rifle. This attracted the attention of the military to the idea of ​​using silent weapons during commando raids, which were carried out on various sections of the coast of occupied Europe.

Aware of the low penetration and slaughter effect of a small-caliber cartridge at ranges of the carbine, De Lisle experimented for a while with the pistol 9-mm cartridge “Parabellum”, but the best result was obtained with the American cartridge .45 АСР (11,43 x 23) - its bullet with 14,9 g weight It had an initial speed of 260 m / s (noticeably lower than the speed of sound) and a transverse load of 14,5 g / cm 2. This allowed her to maintain lethal force at a sufficiently long range. As a result, 11,43-mm magazine “De Lisle Carbine” appeared, which interested the British ODR. The De Lisle design was a combination of the butt, bolt and trigger of a standard Lee-Enfield magazine rifle Mk III, a shortened barrel of a Tompson machine gun, a Colt M 1911 pistol and an original De Leisle silencer. The butterfly valve interlocked with the receiver box with two lugs, had a flat notched trigger and a comfortable, recessed handle, the fuse mounted on the receiver. The barrel was attached to the receiver thread. The pipe (casing) of the integrated muffler, the longitudinal axis of which was below the axis of the bore, was fastened to the front ledge of the receiver. The “asymmetrical” position of the muffler casing allowed to “lay down” the weapon in small dimensions and not to lift unnecessarily sighting devices over the butt. 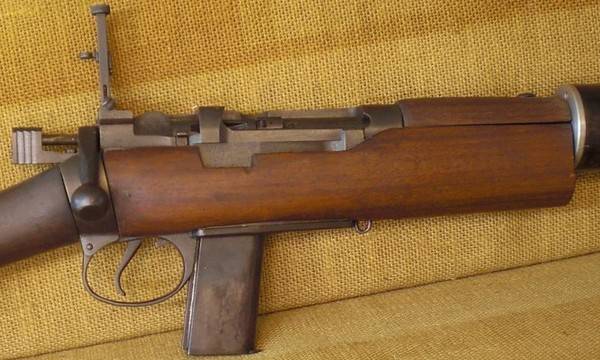 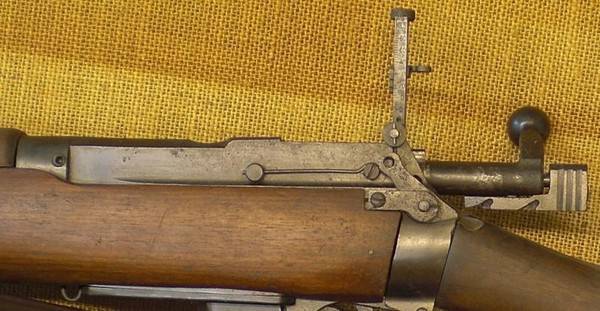 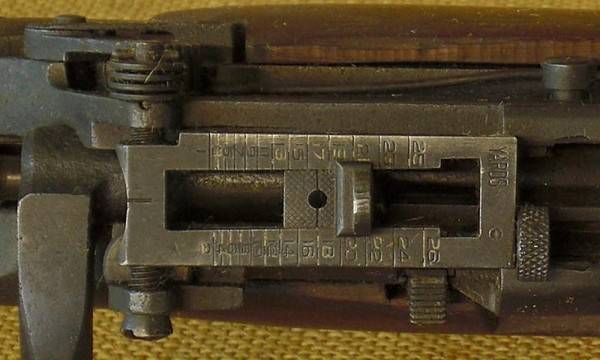 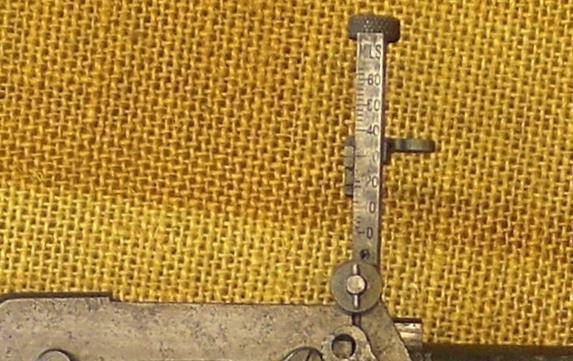 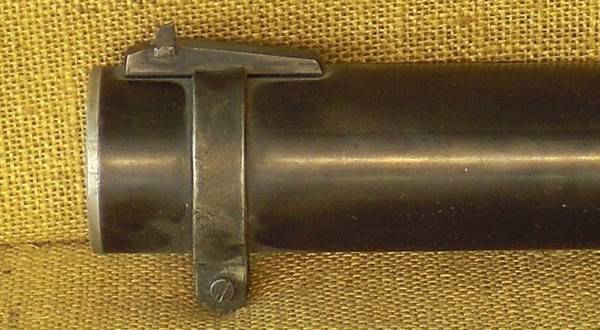 Inside, the silencer was divided into two parts - a separator was located in the front, the rear, surrounding trunk formed a single expansion chamber. The expansion of powder gases was carried out as if in several stages. On the muzzle of the barrel was screwed coupling. Gases were discharged from the barrel through four rows of holes made along the bottom of the rifling, first into the space between the barrel and the coupling, and from there into the rear chamber of the muffler. Before the muzzle of the barrel, the coupling formed a bell that promoted the expansion of most gases, both leading the bullet and those following it and not retracted through holes in the barrel walls. These gases entered the separator, which was a series of split copper washers, put on two longitudinal rods and forming a series of chambers. Cuts of the washers were made at the top, and the edges of the cut were bent in different directions. This not only opened the way to the pool, but also contributed to the "twisting" of gases, their deceleration and diversion to the periphery of the chambers. The separator could be removed from the muffler for cleaning or replacement. Although the replacement of washers in the process of service would hardly be needed - they could withstand shots up to 4500, which was, by the way, a noticeable advantage over silencers with rubber washers. This scheme made the silencer very effective - according to English data, the sound of the shot was very difficult to see even at night at a distance of 50 yards (about 46 m). With an aimed shooting range of up to 200-275 yards (183-251 m), this was an excellent indicator. According to the statement, the loudest sound source was a strike on the cartridge primer. 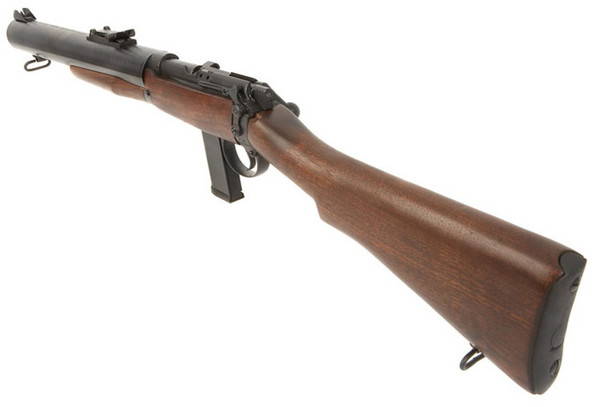 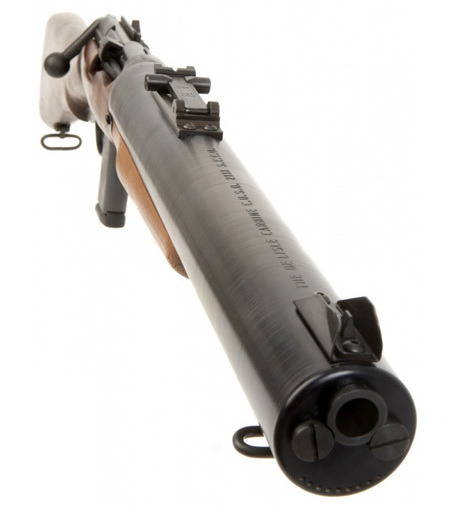 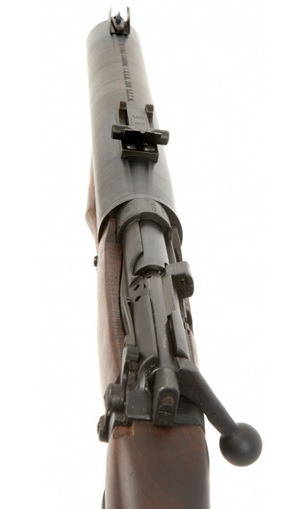 True, the knock of parts when reloading was as loud as that of a regular rifle, so the shooter had to count on hitting the target from the first shot. But a comfortable butt with a protrusion of the neck, the descent with a “warning” and a relatively long barrel for this cartridge contributed to the accuracy of shooting. In order to “make no noise” when preparing the shot, the shooter could wear a carbine with a cartridge in the chamber and the safety lock turned on. Before the shot, the fuse was turned off, and the shutter trigger was manually pulled back, cocking the drummer. To install the pistol magazine, the lower window of the receiver was covered with a special lid with an insert, the store latch was reworked. A store for 11 cartridges was also developed, but it turned out to be almost twice as long as a regular pistol and did not go into the series. 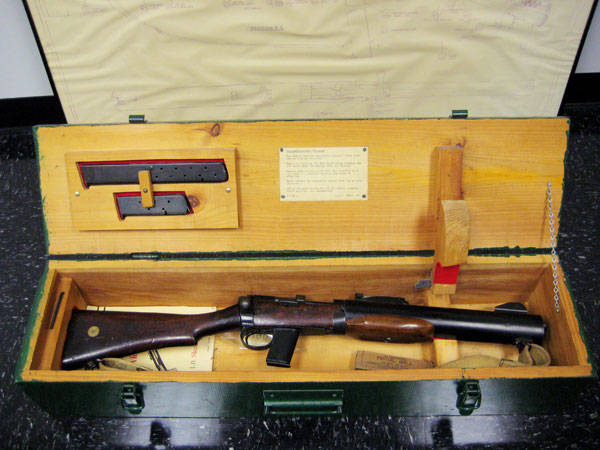 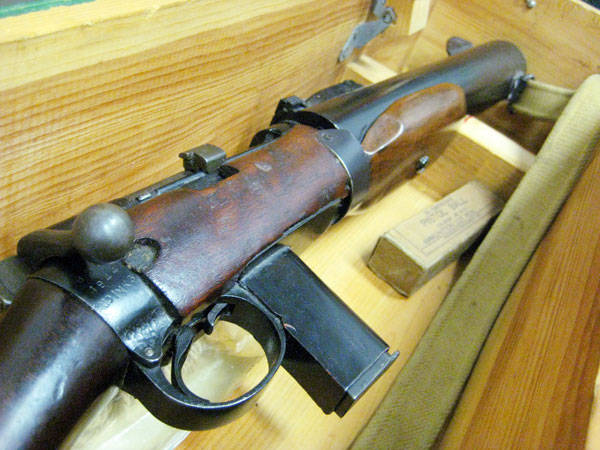 A wooden fore-end and front swivel were fastened to the muffler from below, and the base of the front sight and block sector sight were mounted on top. The sight bar had notches from “1” to “6”. The replaceable front sight was fastened at the bottom to a “dovetail”, its rear section prevented glare in the direction of the sight and ensured a clear view of the front sight in any direction of illumination (except for “back light”, of course). 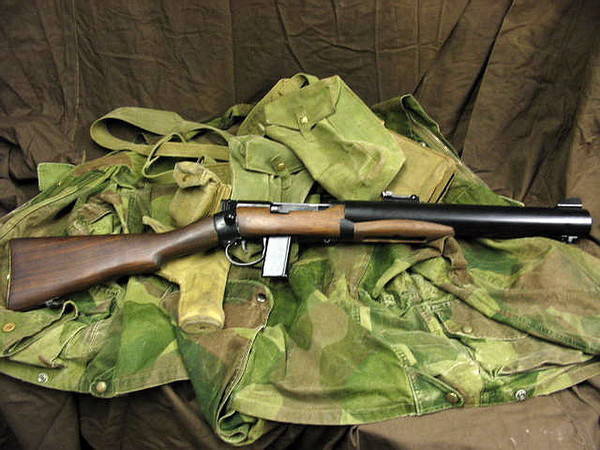 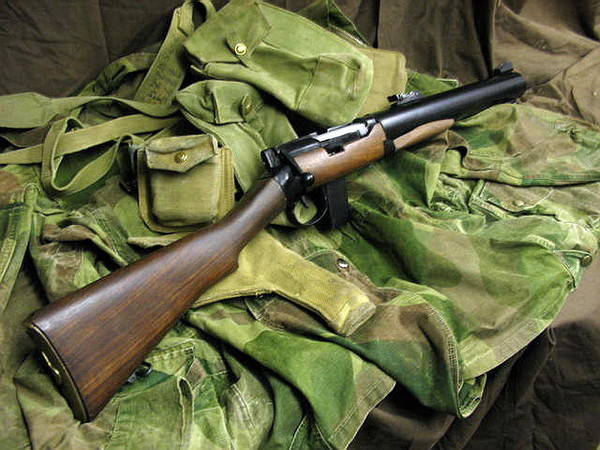 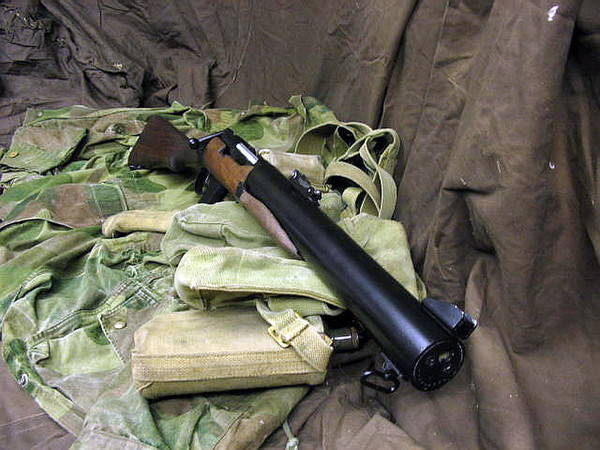 The first batch of 17 carbines was released by Ford-Dagenham. Serial production was supplied by Sterling Armament Company, which manufactured 500 pieces. Sterling (Sterling, ibid. In Dagenham) introduced a number of changes to the design: replaced the steel casing of the muffler with aluminum to reduce weight, eliminated the front casing sleeve, performed the notch of the sight in yards - 50, 100, 150 and 200 (around 45.5, 91.5, 137 and 183 m). A small number of carbines for the commandos parachutists were supplied with a pistol grip and a folding butt, in accordance with this, the front strap for the belt was transferred to the left side of the weapon. It is curious that the design of the folding butt was similar to the Sterling submachine gun, which was only developed during this period (later Sterling itself received a silencer according to the “De Lisle Carbine” scheme). Details of the carbines were ordered to individual London firms.
In terms of the degree of silencing of the sound of a shot, accuracy of fire, and the striking effect of a bullet, the De Lisle carbine exceeded such weapon types for commandos as the “silent” submachine gun “STEN” Mk2S and Mk6. However, he demanded careful processing and fitting of parts.
For wartime, this was a serious drawback, so the release turned out to be small - in any case, the carbines were made smaller than STEN Mk2S.
Industrial production of De Lisla carbines began in the middle of 1944, when the Allied invasion of Europe had already taken place. When the British troops were “behind the channel,” the need for special weapons for commandos disappeared and the order was canceled. By that time, about 130 weapons had been released.

“De Lisle” carbines were practically not used in Normandy - the need for “silent” weapons turned out to be small here. But for them there was a job in the jungle of Southeast Asia. For example, in Burma, “commandos”, penetrating into the depths of the Japanese defense, fired on transport columns and convoys from “silent” carbines. In Malaysia, carbines were useful in operations against the insurgent local population. Soon after the war, most of the "De Lisle" was destroyed - the British authorities feared that in the post-war confusion such an effective weapon could fall into criminal hands. As a result, a little bit of “De Lisle Commando Carbine” has survived to this day. True, at the beginning of 80-x their release tried to revive. For example, Low Enforcement International Ltd., along with other samples of “silent” weapons, introduced the models “De Lisle” Mk3 and Mk4 under the chambered NATO 7.62x51 with a corresponding redesigned silencer and magazine, gate and trigger type “Lee-Enfield” 4, as well as with a bracket for installing an optical sight. Although such a weapon was proposed for “special operations forces”, it was intended more for modern collectors - good, with a small issue of “De Lisle” managed to gain considerable fame. The changes made to the design, apparently, are not accidental. First, it is no longer pure "plagiarism"; secondly, with rifle cartridges, the “silencer” becomes rather a “lowering” of the sound level of the shot, which means that the weapon may be allowed for commercial sale; thirdly, accuracy and accuracy of shooting increased slightly, which gives the weapon a “sporting” interest. 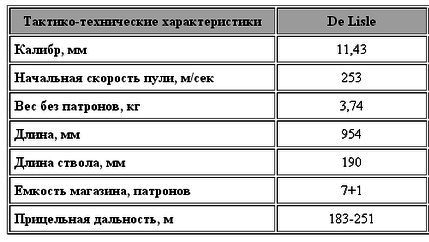