Putin's plans for the restoration of the Russian fleet 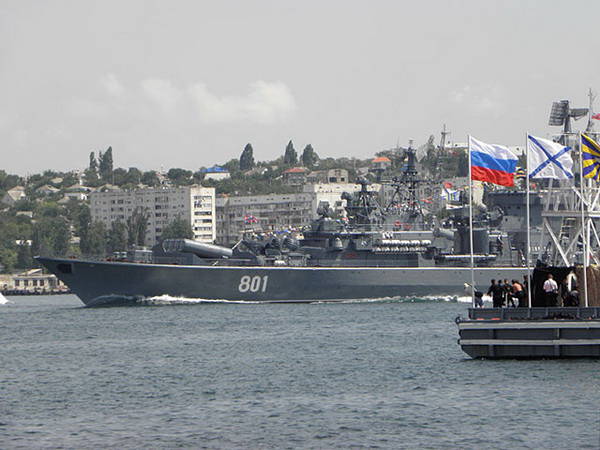 The loud promises of Russian Prime Minister Vladimir Putin to create a modern navy for 2020 trillion rubles by 4,7 in Russia perplexed the media. The Prime Minister announced this the other day at the interregional conference of the United Russia party in Cherepovets, however, neither he nor the military began to spread what exactly is included in the concept of "modern fleet" when the program for its creation starts, because so far it is not noticeable and what exactly will be done for this.

It is also unclear whether this amount includes two Mistral helicopter carriers worth 1,2 billion euros, which are bought from France, Nezavisimaya Gazeta notes in an editorial. In addition, from the statements of the military it is impossible to collect a clear picture of the future of Russia fleet.

So, in June 2009, the Commander-in-Chief of the Russian Navy, Vladimir Vysotsky, announced that the fleet would receive naval ships instead of classical aviation complexes that will include the "space component, aviation, marine and advanced technologies in other areas." But then it turned out that funding for the construction of such ships was not included in the state arms program. This was discussed by the Minister of Defense Anatoly Serdyukov and Deputy Prime Minister Sergei Ivanov.

As for the construction of new ships for the Russian fleet, the situation here is also ambiguous. NG notes that Russian factories are building them, of course, but they are usually exported to India and China.

Meanwhile, the Russian fleet is replenished with piece goods, and, as a rule, we are talking about the mosquito fleet, which Putin’s stated tasks "from nuclear deterrence to presence in the oceans", of course, cannot be solved, writes NG.

On the absence of modernization in the navy, declared on Monday the former commander of the Black Sea Fleet, Admiral Vladimir Komoyedov. He was outraged that the Black Anti-Submarine Ship Ochakov was written off on the Black Sea Fleet, and after repair. “Pofigism,” Komoyedov said in connection with this. “We are not creating anything new. We will drown with the decay.”

Media: the state is ruining the manufacturer of priority vessels. Help is sought from the Church and abroad

In Cherepovets, at the United Russia interregional conference, Vladimir Putin also said that the creation of ice-class vessels would be one of the priorities. Among the companies that are able to carry out such orders, and St. Petersburg "Admiralty Shipyards", and "Baltic Plant". It is noteworthy that, as reported by the media, “Baltiysky Zavod” is purposefully trying to bankrupt the state-owned company in order to buy it for nothing. Putin promised to sort out the problems.

Difficulties at the Baltiysky Zavod began a long time ago when the bank of the main owner of the shipyard, Sergei Pugachev, went bankrupt. The other day the Arbitration Court of St. Petersburg seized the first floating nuclear thermal power plant, which is being built at this enterprise. The lawsuit was filed by the state-owned Rosenergoatom due to the threat of a bankruptcy of the plant, reports St. Petersburg television channel 100tv.

The shipyard management in the absence of money blames government customers who do not fulfill their obligations. Rosatom had to pay for rubles 1,5 for the ship. When the work on 1 billion rubles was performed, the main customer offered to pay off with “bills of exchange of a non-existent bank,” said Vyacheslav Firyulin, chairman of the trade union committee of the Baltic Plant.

Meanwhile, the United Shipbuilding Corporation (USC), a state-owned company, now claims to acquire a ruined factory, and its board of directors includes high-ranking officials and representatives of other large state corporations, and the vice-premier is Igor Sechin.

The USC is not satisfied with the amount requested for Baltiysky Zavod: the owners expect to receive almost 100 billion rubles, and the state is ready to pay only about 20 billion rubles. “The state needs a plant, but they want to buy it for a pittance, so they are pushing for bankruptcy. They don’t give work, loans, and the plant itself will die.

As a result, the plant is forced to look for other customers - both in Russia and abroad. "We officially stated. We are, of course, waiting for orders from the Russian state, but now we will be profiling for import orders for shipbuilding. We will try to work with foreigners," said Andrey Fomichev, general director of OAO Baltiysky Zavod.

In the meantime, no foreign orders were found, in the 6-m foundry of the Baltiysky Zavod metal is poured not for priority icebreakers, but for the Nizhny Novgorod diocese, which ordered a bell at the factory.

“We have huge sums of money allocated to strengthen the country's defense,” Putin continued his speech at the ER conference. “We never allocated such money at all. There were Soviet times, when everything, on the contrary, was abandoned, there were comparable figures. In modern Russia - never - 20 trillion rubles to 2020 of the year. "

At the same time, he emphasized that "we do not need to master billions and trillions, but we need to ensure the quantity and quality of products." Putin also said that in the fulfillment of the defense order, the profitability of enterprise-producers should be ensured - at least 15%, so that there were resources for development, for decent wages.

Putin also announced that 2020 trillion rubles would be spent on retooling the Russian Navy before 4,7. “In fact, after a long break, we are launching a large shipbuilding program,” the ER leader noted. "The goal is clear - it is the creation of a modern fleet capable of solving all tasks, from nuclear deterrence to presence in the oceans, to protecting our economic interests and Russia's biological resources," Putin said.

He also said that the long-suffering strategic nuclear submarine missile cruiser "Yuri Dolgoruky" is currently "successfully tested" and this year should be handed over to the Pacific Fleet of Russia guarding the south-eastern borders of the country, including the Kuril Islands.

The state defense order for the fleet has not been fulfilled: the Ministry of Defense did not agree with the shipbuilders

1 of September, the Kommersant newspaper wrote that the Defense Ministry, despite the ominous warnings of the president and prime minister of Russia, did not agree with the three key suppliers of the most essential things for the army - combat aircraft, submarines and strategic missiles. According to the publication, we are talking about the United Aircraft Corporation (UAC), the United Shipbuilding Corporation (USC) and the Moscow Institute of Thermal Engineering (MIT).

The same day, Defense Minister Anatoly Serdyukov said that the Russian state defense order at 2011 had been completed on the whole: "just yesterday, the day before yesterday" all contracts were signed, with the exception of the contract with USC.

On September 2, a source in the Gazety.ru defense complex, familiar with the negotiations, said that the largest contracts - with Sevmash for the construction of strategic submarines of the Borey and Yasen class - would be signed later. He syronised: "The Ministry of Defense left the fattest for later: they have not reached their hands on these contracts."

On the whole, Serdyukov’s latest statement on the implementation of the state defense order for this year so outraged the Russian press that in unison began to accuse the minister of lying: the fate of the largest orders has not yet been resolved, contracts for the supply of new fighters, submarines and unparalleled strategic rockets are still not signed, argued by the media.

We are in Yandex Zen
A great interview with Sergey Lavrov: about Ukraine, Obama and Iran
What you didn't want to know about England
9 comments
Information
Dear reader, to leave comments on the publication, you must to register.