9 September 2011
23
First American main battle tank M1 Abrams rolled off the assembly line of a tank factory in Lyme, Ohio in February 1980. Since then (including for export), more than 10 tanks all modifications. The tank was originally designed for fighting in Europe, however, he really had to excel during the fighting in Iraq. Where, in the opinion of the US military, the tank proved to be quite effective, reliably protecting the crew from various weapons.

The SEP program was launched in 1999 year, as a digital version of the modernization, standing on armament of tanks version M1A2. This update included equipping the tank with third-generation new armor, no uranium filler, a new fully digital SLA, an 2 generation thermal imaging system for the gunner and tank commander with significantly improved target detection capabilities at any time of the day. In addition, this retrofit kit provides for equipping the tank with an auxiliary power unit for the operation of all electronic systems without switching on the engine and the thermal control system of air conditioning for electronic equipment and crew. In addition, new processors were used, the memory capacity of the machine was increased, new network communications were applied.

According to experts, the use of 2 thermal imagers of the generation allowed to increase the picture clarity by 70%, reduce the shot time by 45% and improve shooting accuracy. Deliveries of the first upgraded M1А2 SEP were launched in August 1999. Total for this program has been upgraded 1150 previously released tanks M1A2. The Saudi МХNUMXА1 was also brought to the new “digital” standard (the contract for upgrading the first 2 tanks was signed in the 60 year, the beginning of the program implementation is considered the November 2006 of the year). 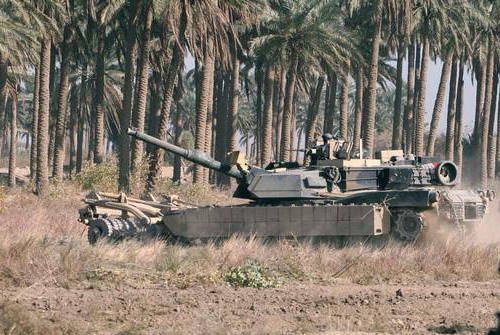 The most recent modification of the tank to date is the “digital” configuration М1А2 SEP v2. Today, under the new digital standard SEP v2, the previously released machines M1А1 are being upgraded. The new version differs from the previous "Abrams" with improved color displays that serve to display a tactical situation, new sights with electro-optical and infrared channels, new communication tools that are compatible with the networks of infantry units and formations, as well as a modified power plant. This modernization of the MBT involves the use of a number of technologies created by the program Future Combat Systems (Combat Systems of the Future). This upgrade entails bringing the 435А1 battle tanks (in service for more than 1 years) and the 20 machines М180А1 to the "digital" standard 2.

In the middle of the 90-ies, the US Army Armored Directorate presented several concepts for the further development of the МХNUMX Abrams tank. Common to all projects is the installation of a remote-controlled gun, instead of a tank tower, with a protected armor breech. This solution can significantly reduce the height of the machine and its mass. As the main weapons Existing 120-mm smooth-bore gun and prospective electromagnetic guns of various calibers were considered. The crew of the new promising tank should be reduced to 2 people due to the installation of automatic charging and automation of the guidance of the gun at the target. Due to the mass saved (due to the lack of a full-fledged turret), it is supposed to increase tank armor, bringing it in the frontal part of the hull to 1000 mm steel armor plate equivalent, and also equip the tank with built-in dynamic protection.

It was assumed that the suspension of the tank will be active, electromechanical or hydropneumatic. The tests of the latter were conducted in 1987-1989 years on 2-x specially converted tanks. At the same time, there was an increased reliability of the undercarriage. On average, during testing, the undercarriage failure was detected after 1600 km of mileage, and the estimated service life was estimated at 10 000 km. The number of smoke grenades was planned to be brought to 80 units, all of them had to be placed inside the tank corps. 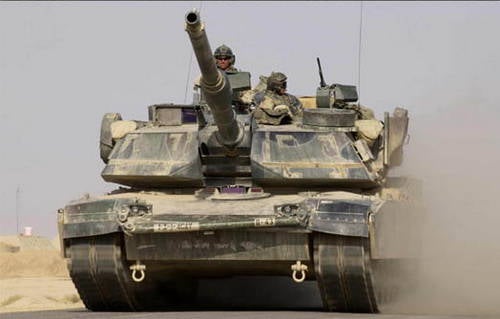 Back in the 1987-1988 years in America, we began testing the FASTDRAW automatic loader (AZ) designed for the M1 tank by Western Design. This machine consists of 2's carousel stores with an automatic feeder and power drive. The machine provides storage, protection and supply of 36 120-mm tank shots. The rate of fire of the tank when it is used is increased to 11,6 rounds per minute. Also, this system, according to the manufacturer company, provides greater survival of the crew in comparison with those solutions that are now used in the Abrams tank. This is achieved due to the lower vulnerability of ammunition. Carousel stores are separated by an armored partition 40 mm thick, another armored partition separates the stores from the inner space of the tower. This partition is equipped with two sliding flaps, which are much smaller in size than the large sliding doors in М1А1 tanks.

As a drive of the loading mechanism, both electric and hydraulic power elements can be used (the first is safer). AZ is actuated by the gun selector switch. The machine is controlled by a microprocessor, which indicates the location of the capture of the nearest required shot and gives the command to open the outlet. After that, the shot is removed, rotated and sent to the breech of the gun by an automatic feeder. A manual backup drive is also provided, but when used, the firing rate drops noticeably to 2 shots per minute. The main disadvantages of AZ FASTDRAW, according to the statements of competent persons, is the heavy weighting of the loading design itself as compared with manual (up to 60%) and general lack of knowledge of this system as a whole.

A little apart is the program to create an experimental tank, CATTV (Componets Advanced Technology Test Bed). The purpose of its creation was demonstration tests in real conditions of MBT elements designed for advanced tanks, developed under the A3 program. Elements worked out on this platform are already included in the M1A2 upgrade and are planned to be included in the A3 version.
It was assumed that CATTV will exist in 2-x variants. The first is a machine built on the M1А1 tank chassis (this sample was completed in the 1993 year) and the second one based on a unified chassis, which in the future was to become the base for a promising tank. 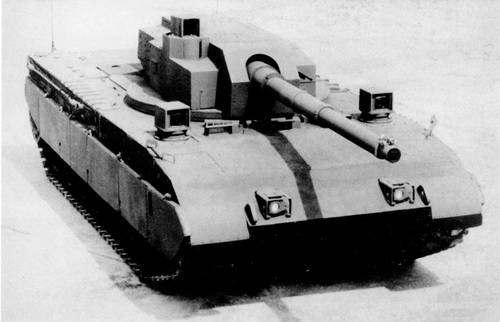 Tank version with uninhabited tower
The main weapon of the SATTV was to be the 140-mm ATAS Cannon System (Advanced Tank Canon). This tool is the US contribution to the quadrilateral development program for a promising main tank, in which the United Kingdom, Germany and France also participate. This system consists of 140 smooth-bore XM291 gun, XM91 automatic loader and 140-mm ammunition family - XM964 (sub-caliber), HM965 (cumulative-explosive), XM966 (training). The muzzle energy of this gun is 2 times the 120-mm M256 gun, occupying the same volume in a static position and having less weight (by 90 kg). It is assumed that the new cannon system can be equipped with barrels of both 120 and 140 mm. They can be replaced one on another in the field in a fairly short time (about an hour).

After many years of discussions on the modernization of the M1 Abrams MBT, US Army specialists seem to agree that it is necessary to confine ourselves to small and least expensive improvements to the tank. There are no sufficient funds for large-scale modernization and, apparently, there will not be 5-10 years yet. So far, the US Army wants to get a tank with a lower combat mass (60 tons against today's 62 tons). For this, it is necessary to develop a new turret comparable in mass to the Leclerc's tank turret (19 tons).

The impressive combat effectiveness, which M1 Abrams showed during Iraqi companies, prompted the US Army to delay the plans for the imminent resignation of this tank. And focus on upgrading it using advanced technologies FCS (Future Combat System). None of the proposed options developed under this program could demonstrate greater potential than the tanks currently in service. Not so long ago, the FCS program was minimized.

The main efforts of American engineers plan to focus on work on the creation of a new version of the tank M1A3. It is assumed that the weight of the tank will be significantly reduced, it will receive AZ, new technologies in the form of fiber-optic wires and a light version of armor. The new chassis and engine will also contribute to weight reduction. It is assumed that the M1A3 will weigh 55 tons or even less.

We are in Yandex Zen
"Abrams" without "dill" and embellishment
T-72B vs M1A2 "Abrams"
23 comments
Information
Dear reader, to leave comments on the publication, you must to register.