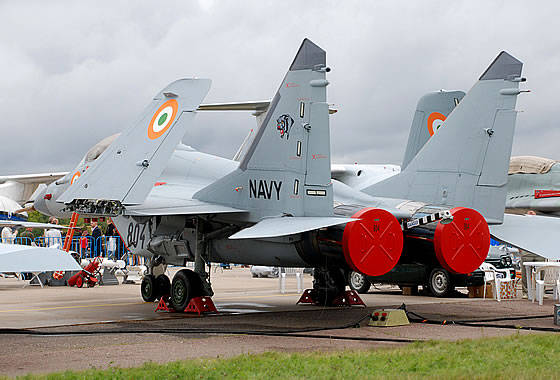 The squadron "Black Panther" of the Indian Navy will complete the adoption of the first batch of MiG-29K / KUB fighters ordered in Russia by mid-2012. In the future, the squadron will receive the number "303".

According to the information of the Press Trust of India agency, which refers to the statement of the squadron commander, Commander B. Hota, the delivery of the latest aircraft from the first batch to the 16 vehicles is likely to be completed this month.

Speaking to the media during the press conference on the 50 anniversary of the Navy air base "Khanza", the commander also said that the modern simulator for training pilots MiG-29K will be ready for work in the coming months.

The sea base "Khanza", in addition, is equipped with a simulator to prepare for take-off from a springboard and a coastal test facility (SBTF - shore-based test facility), which is currently available only in the United States and Russia.

As planned, the MiG-29K based on the Khanza base will be put into service on the Vikramaditya aircraft carrier after its transfer to the Indian Navy at the end of next year.

According to the leadership of the Indian Navy, the MiG-29K is one of the most versatile deck fighter aircraft aviation The world.

The MoD of India signed a contract for the purchase of the MiG-16K fighter jets, including the 29 two-seater MiG-4KUB combat training aircraft, in January 29 under the agreement on the transfer and modernization of the aircraft carrier Cruiser Admiral Gorshkov.

During the solemn ceremony held on February 19 of the year at the Hanza Air Force Base, in the presence of Arakkarambil Kurian Anthony, Defense Minister of the Indian Navy, the first four carrier-based MiG-XNUMHKUB fighters were commissioned. The event was attended by Viktor Khristenko, Minister of Industry and Trade of the Russian Federation, who led the Russian delegation.

In the framework of the visit of Russian Prime Minister Vladimir Putin to India 12 in March 2010, a contract was signed for the delivery of a second batch of MiN-29K fighter jets from 29. Deliveries are scheduled to begin with 2012. The contract value is 1,5 billion dollars. From the new party in 29 fighters MiG-29K 16 aircraft will be based on the aircraft carrier Vikramaditya.

As part of the procurement program for MiG-29K / KUB carrier-based fighters, the Indian Navy in April 2009 opened a technical center on the territory of the Hanza naval base in Goa, which will provide aircraft support as well as pilot training.

The MiG-29K shipboard fighter belongs to the 4 ++ generation and is capable of performing a wide range of tasks at any time of the day and in adverse weather conditions, including winning air supremacy, a ship’s air defense, and defeating surface and ground targets. The armament of the MiG-29K includes missiles capable of hitting targets outside the direct line of sight, guided anti-ship missiles, unguided missiles, bombs and an 30-mm cannon.

MiG-29K has improved technical and operational characteristics, increased reliability. Aircraft avionics are built on the principle of open architecture.

Deck MiG-29K for landing on an aircraft carrier equipped with a locking mechanism and a reinforced chassis, folding wings and a special coating that prevents corrosion from seawater.

Ctrl Enter
Noticed oshЫbku Highlight text and press. Ctrl + Enter
We are
Completed a surprise check of the troops of the Central Military DistrictAs part of Vladimir Putin’s visit to India, a number of large MTC contracts are expected to be signed.
3 comments
Information
Dear reader, to leave comments on the publication, you must to register.