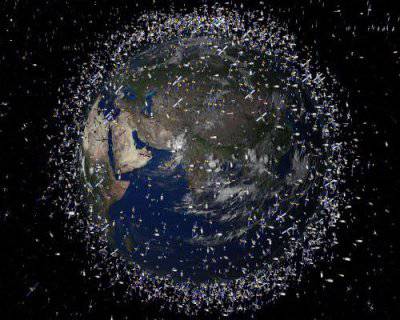 Imagine a situation when, taking the garbage out of the house, you dump it right there - right at the entrance. You have a broken refrigerator - you throw it right out the window. Products, so to speak, active life, also merge right at the facade. Over time, the plot adjacent to your house will turn into a real dustbin, which you yourself will not allow to continue living in your house.


The situation similar to the described apocalyptic plot also takes shape in near-earth orbit. During the time since the launch of the first satellite, so much garbage has accumulated in the space closest to our planet that it may threaten the safety of further flights. Back at the end of 70, NASA scientist Don Kessler said that the garbage problem in orbit would soon threaten humanity. Since that time, a little more than 30 years have passed, and Kessler's words are beginning to take real shape. So last summer, the crew of the ISS was forced to take emergency measures and change to a so-called emergency spacecraft due to the fact that at a distance of three hundred meters from the station a large piece of metal construction flew by.

The calculations of scientists show that the number of debris and fragments of old satellites, parts of spacecraft, elements of space stations "multiply" in orbit, not even in arithmetic, but in the geometric progression itself. If you look at a photograph of the planet Earth in a particular private range, you can see that millions of small and large particles of space debris are flying around it. If humankind doesn’t bother with this problem in the near future, then in 20-30 years it will be possible to forget about the take-off of spacecraft from the Earth’s surface. Any person who is at least in general terms familiar with the laws of physics, understands that at high speed even a tiny metal fragment can simply break off the skin of a spacecraft or cause irreparable damage to a satellite. Many people still remember the terrible catastrophe of the American shuttle, which was completely destroyed only due to the fact that a piece of insulating foam had come off its skin. At a speed of several hundred meters per second, even such soft material turns into a real shell. What then to say about multi-metal metal fragments of rockets that remain in space ...

Not only that space debris that has accumulated in orbit, now interferes with the flights of spacecraft, it can cause the scattering of sunlight. So, if the amount of debris and other debris above the Earth’s surface in near space grows 30 times, which can happen within the next 10 years, then our planet may face a decrease in temperature by almost 0,5 degrees Celsius. At first glance, this figure seems insignificant, but for some organisms that inhabit the Earth, even this may be enough for complete extinction. Space debris will simply redirect heat flows from the Sun, which will lead to a decrease in temperature on the surface of our planet.

In addition, the greater the amount of space debris accumulated in near space, the more expensive the flights to the same ISS will be, because engineers will have to solve the problem aimed at increasing the safety of spacecraft.

That is why many scientists are already urging to start a program to clean up near-earth orbits from accumulated debris. To do this, allocate huge funds. The US Congress is not in a hurry to remove foreign exchange reserves from the bins of the US steeped in debt. But if the world community ignores the problem of space debris now, then in the future money will have to be spent much more.
In addition to the situation with the "cleaning" of space, you need to develop a strategy that would allow you to automatically dispose of debris, fragments and waste at the very moment when they appear in space. This is a very difficult task, but the decision cannot be postponed for a minute.
Ctrl Enter

We are in Yandex Zen
On the ISS will appear "Andronaut"
NASA: "As we return to the moon"
4 comments
Information
Dear reader, to leave comments on the publication, you must to register.