"FC-1 is significantly inferior to the MiG-29 in performance, but it is cheaper - about 10 million dollars against 35 million dollars", - explained the source of the newspaper

Russian aircraft manufacturers are forced to admit that in the global market weapons they have a new serious competitor - China. The head of RSK MiG and AHK Sukhoi Mikhail Pogosyan opposed the signing of a new large contract for the supply of Russian jet engines RD-93, which are equipped with Chinese-Pakistani fighter jets FC-1 (in the Pakistan version - JF-17). The contract for the supply to China of 100 RD-93 engines was planned to be signed by May. However, Pogosyan believes that FC-1 is a direct competitor to the Russian MiG-29.

According to a source from the Kommersant newspaper in the military-industrial complex, Russia is negotiating to supply a large party of MiG-29 to Egypt - the whole country plans to purchase 32 vehicles. In parallel, the Egyptian side began negotiations with the manufacturers of FC-1. In addition, the Egyptian government began negotiations with Pakistan on the joint production of Chinese fighters.

"FC-1 is significantly inferior to the MiG-29 in performance, but it is cheaper - about 10 million dollars against 35 million dollars", - explained the source of the newspaper. The head of RSK MiG insists that the re-export of technologies should be coordinated with the manufacturers of the final products so as not to cause damage to them.

However, Rosoboronexport explained that "re-export is carried out in accordance with the decisions of the Russian government. There is no such procedure as to coordinate such contracts with manufacturers of final products, in this case aircraft,".

Permission for re-export to Egypt of the RD-93 as part of FC-1 was granted by the FSMTC in November 2007. The engine can also be shipped to Nigeria, Bangladesh, Algeria and Saudi Arabia.

Konstantin Makienko, an expert at the Center for Analysis of Strategies and Technologies, considers Mikhail Pogosyan’s demands to be fair. “If Russia really collides with China in the Egyptian arms market, something needs to be done about it.” However, according to Ruslan Pukhov, a member of the public council at the Ministry of Defense, "it will be extremely difficult to explain to the Chinese why we still supplied engines, and then suddenly changed our mind."

Russian and Chinese manufacturers have already encountered each other in the global market. Since March 2007, Turkey has been holding a tender for the purchase of air defense systems. Among others, the Russian C-400 and the Chinese HQ-9 complex are participating in the fight. In the same year, 2007, Russian and Chinese armored personnel carriers competed with each other under a tender by the Thai Defense Ministry. In September, the Indonesian Air Force 2008 announced plans to replace the Hawk Mk-53 British combat training aircraft - both Russian Yak-130 and Chinese FTC-2000 can be purchased. In 2009, the MiG-29 won the tender of the Myanmar Defense Ministry for the supply of 20 fighters, and their main competitors were the Chinese J-10 and FC-1 aircraft. 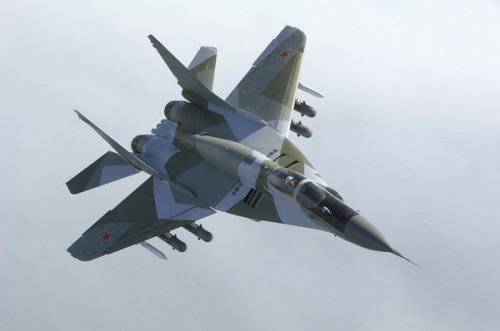 The MiG-29 is a fourth-generation Soviet / Russian fighter. The mass production of the MiG-29 began in the year 1982.

The MiG-29 is a fourth-generation Soviet / Russian fighter. The mass production of the MiG-29 began in the 1982 year, and the first fighters of the country's Air Force received in August the 1983 year. In subsequent years, the design of the MiG-29 has undergone some changes aimed at improving the aircraft performance. Currently, RSK "MiG" continues the serial production of improved modifications of the MiG-29, including the MiG-29SMT and MiG-29UB multi-purpose fighters, upgraded.

In 1988, to equip aircraft-carrying cruisers, the MiG-29K aircraft was designed and built with folding wings for a more compact placement of the aircraft on the ship, landing hook and reinforced landing gear. November 1, 1989 for the first time in the domestic aviation and the Navy took off the MiG-29K fighter from the deck of an aircraft-carrying cruiser equipped with a take-off springboard.

Due to its reliability, the MiG-29 is in high demand abroad. All in all, the Air Force of Russia and the 25 states of the world are armed with more than 1600 MiG-29 light fighters.

MiG-29 in many ways exceeds its foreign counterparts (F-16, F / A-18, Mirage 2000). Due to the excellent aerodynamics, it is capable of accelerated acceleration, has a high rate of climb, a small radius of turns, has high angular speeds turn and is able to perform long maneuvers with large overloads. The aircraft can effectively conduct active maneuvering combat using a cannon, all-round missile combat at close and medium distances, intercept assault and reconnaissance aircraft, including low-flying against the background of the ground.

A unique feature of the MiG-29 is the ability to take-off with a combat load on one engine with the inclusion of a second engine already in the air, which saves valuable time during take-off on alert.

Combat use: MiG-29 fighters were used during the Gulf War (1991 year), the conflict in Transnistria (1991-1992 years), NATO operations against Yugoslavia (1999 year). During the First Chechen War, Russian MiG-29 patrolled the airspace of Chechnya.