About European fighters against totalitarianism 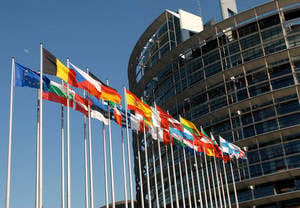 One cannot but admire the consistency of the European Union. What is conceived, step by step, is persistently put into practice. In 2009, on the eve of the 70 anniversary of the start of World War II, the OSCE Parliamentary Assembly adopted a resolution “On the unification of a scattered Europe”, in which Nazism and Stalinism were equated to each other and condemned as the two main totalitarian regimes in Europe of the 20th century. At the same time, the European Parliament decided to celebrate August 23 as the “Day of Remembrance for the Victims of Totalitarian Regimes”. The date was chosen precisely: on the night of 23 on 24 of August 1939, the USSR and Germany concluded a non-aggression pact (“Molotov-Ribbentrop Pact”), which is beneficial for today's Western politicians to be the trigger of World War II, despite all the facts.


23 August 2011 in Warsaw, in the Museum of the Warsaw Uprising, the Deputy Prime Ministers of Latvia and Hungary, the Ministers of Justice of Lithuania, Estonia, Croatia, Romania, the Czech Republic, Spain, Sweden, Slovakia and Malta gathered to celebrate this day for the first time. The outcome of the meeting was the “Warsaw Declaration”, which stated that “crimes of totalitarian regimes in Europe, regardless of their kind and ideology, should be recognized and condemned”, proclaimed “support to victims of totalitarian regimes”, whose suffering, as stated, “did not disappear into obscurity. "

At one time, Poland, Lithuania, Latvia, Estonia and Hungary took the initiative to introduce “the day of memory of victims of totalitarian regimes” into the European calendar. They were supported in this by the founding countries of the European Union. However, no one takes the trouble to remember the nature of the political regimes of Pilsudski, Ulmanis, Smetona, Horthy, Antonescu and their ilk. Why, when there are calls for condemnation of totalitarianism, are these dictatorial, totalitarian and authoritarian regimes bracketed? After all, Europe, according to the Warsaw Declaration, “suffered under the rule of totalitarian regimes, regardless of whether it was communism, national socialism or any other”?

The current leaders of Poland, Hungary, Latvia can offer other standards of behavior, for example, Polish population under the rule of Pilsudski could flourish. Or Hungarian - with Horthy. Or Latvian - at Ulmanis. However, everything is completely different. In World War II, both Hungary, and Romania, and Slovakia, whose current leaders are so concerned about supporting the “victims of totalitarian regimes,” became military allies of Nazi Germany, multiplying the number of victims of Hitler’s aggression and increasing their “suffering.” Against this background, disgusting hypocrisy sounds like the assurances that those sufferings "will not disappear into obscurity."

However, young Europe is learning from London and Paris. Western historiography, in fact, excluded the Munich Agreement of Chamberlain and Daladier with Hitler and Mussolini from consideration in the context of stories World War II. The surrender of Czechoslovakia to Hitler to be torn apart, a clear signal to Berlin that the movement of the Third Reich to the east will be welcomed, are viewed today in Europe at best as a “miscalculation” of the Western democracies, and not as a green light to the beginning of World War II. But the astute W. Churchill warned, appreciating Munich: “England was offered a choice between war and dishonor. She chose dishonor and will get the war. ”

The war received, and England, and France, and the whole world. However, the heirs of Chamberlain and Daladier’s policies prefer to place responsibility for unleashing the hands of Hitler on the USSR.

The Warsaw Declaration’s clause that Europe’s sufferings from totalitarian regimes are assessed “regardless of their origin, ideology, or intentions” is hypocritical. Already by choosing the date of the “Day of Remembrance for the Victims of Totalitarian Regimes”, the idea is driven into the minds of Europeans: “Communism” and “National Socialism” are equally guilty of “unimaginable violation of fundamental rights and complete denial of human dignity, among which the Holocaust is the most terrible example.” In an effort to equate the Bolshevik USSR and Nazi Germany in the responsibility for the genocide of peoples, the adherents of European democratic values ​​go to a monstrous lie - to blame the USSR for the Holocaust did not even come up with the most desperate fighters of the Cold War. But the army of the current EU member of Romania, for example, under the Antonescu regime, exterminated thousands of Jews in the occupied Soviet lands to 600 (we don’t even talk about the massacres by Romanian soldiers of Russians, Ukrainians, Moldovans, Gypsies).

The absurdity and distortion of the facts of Soviet history have become a means of achieving a strategic goal — a strike on Russia. They create the imaginary struggle with the "Soviet regime", sunk into the past - and prepare the "new Nuremberg" of Russia. Everything is used: the accusations of the Russian authorities in their reluctance to part with the “totalitarian past”, territorial claims on the Russian Federation, demands from Moscow for multibillion-dollar compensation for the “occupation” ...

In the same row - the European Union’s remarkable tolerance for such a glaring phenomenon as the absence in Latvia and Estonia for the past 20 years of universal suffrage, which hundreds of thousands of “non-citizens” are deprived of. The institute of “non-citizens” (this is in a civilized Europe!) Serves to forcefully assimilate national minorities or to forcibly expel them from their countries of residence.

In this series - and the political rehabilitation of collaborators. With the connivance and support of the authorities, marches of fans and participants of the SS Legion are held annually in Latvia, veterans of the SS 20 Division gather in Estonia for their rallies, neo-Nazis march under the slogan "Lithuania for Lithuanians" on Independence Day. When the Estonian Historical Museum prepared an exposition dedicated to the native of Tallinn and the Hitlerite criminal Alfred Rosenberg, to the outrage of the Estonian Jewish community with this fact, the management replied that Rosenberg is honored as ... a “famous resident of Tallinn” (?!).

In sympathy for war criminals do not hesitate to admit and the top leaders of other countries of the "new Europe". Readiness to repeat the actions of Marshal Antonescu 22 June 1941, who ordered the troops to break into the Soviet territory, was expressed by none other than the President of Romania Traian Basescu. This shocked even the Romanian press: it is impossible to imagine a responsible European leader who said that if he had lived in those times, he would have gone along with Hitler, the newspaper Adevarul wrote.

And in the Warsaw Declaration, the EU frivolously pledges "in accordance with appropriate standards, taking into account national conditions and legal traditions in each case, while respecting freedom of expression, to consider the legal aspects of public approval, denial or full trivialization of crimes committed by totalitarian regimes."

In essence, the Warsaw Declaration and the implementation of its provisions lead to a revision of the outcome of the Second World War, the dismantling of the international legal system, approved in 1945 by the victors of Nazism. It is this, and not the states that have become the heritage of the past, that threatens the foundations of peace and security in Europe. However, the inferiority caused by the former cooperation with the Hitler regime and immediately trying to apply the experience of this cooperation to relations with present-day Russia, the European democracies do not see such danger.

We are in Yandex Zen
Igor Shishkin: The concept of the "occupation" of the Baltic states, Bessarabia and the "fourth section" of Poland is a challenge to the security of Russia
Molotov-Ribbentrop Pact: a return to big politics
1 comment
Information
Dear reader, to leave comments on the publication, you must to register.