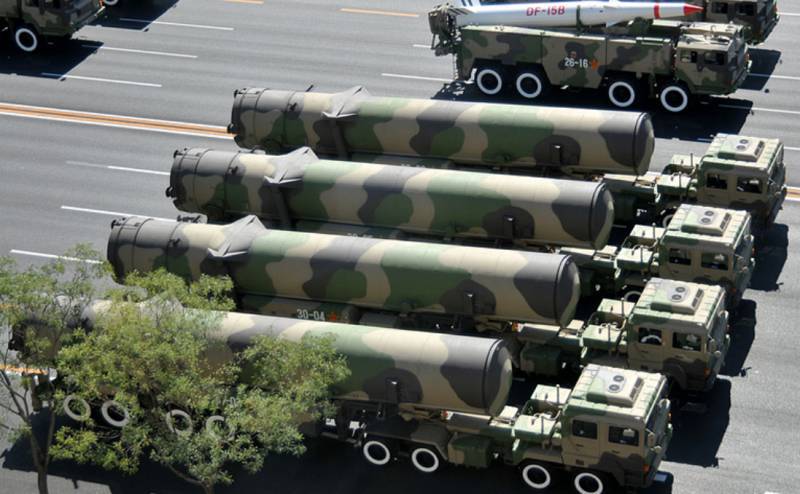 In the past, the leadership of the People's Republic of China placed the main emphasis in the implementation of plans for “nuclear deterrence” on ballistic missiles. In addition to strategic and tactical missile systems, the PLA Air Force has about a hundred Xian H-6 bombers - carriers of free-fall nuclear bombs. This rather old plane is a "Chinaized" Soviet bomber - Tu-16.

In 2011, the upgraded Xian H-6K was adopted. This aircraft implemented a set of activities designed to increase the combat potential of the bomber. On the H-6K installed Russian engines D-30KP-2, introduced a new complex of avionics and EW. The combat load has increased to 12 000 kg, and the range has been increased from 1800 to 3000 km. H-6K capable of carrying 6 strategic cruise missiles CJ-10A, the creation of which used technical solutions of the Soviet X-55.

However, the modernization did not make the H-6K a modern machine. Its combat range, even with long-range cruise missiles, is absolutely insufficient for solving strategic tasks. A subsonic, bulky, low-maneuverable aircraft with a large EPR in the event of a real conflict with the United States or Russia will be extremely vulnerable to fighters and air defense systems.

A few years ago, information appeared on the development of a promising long-range bomber in the PRC. But, in all likelihood, one can’t expect the adoption of a modern Chinese long-range aviation complex in the near future.

This difficult task was very difficult for the Chinese aviation industry. Apparently, wanting to save time, China turned to Russia with a request to sell a package of technical documentation for the Tu-22М3 bomber, but was refused.

For a long time, the main Chinese carrier of tactical nuclear charges was the Nanchang Q-5 attack aircraft developed on the basis of the Soviet MiG-19 fighter. Approximately 30 machines of this type from the 100 available in the line have been modified to use nuclear bombs. 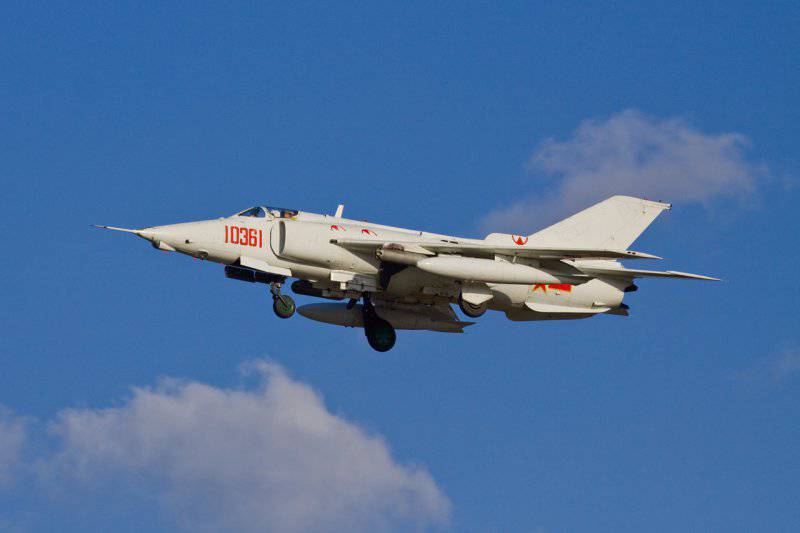 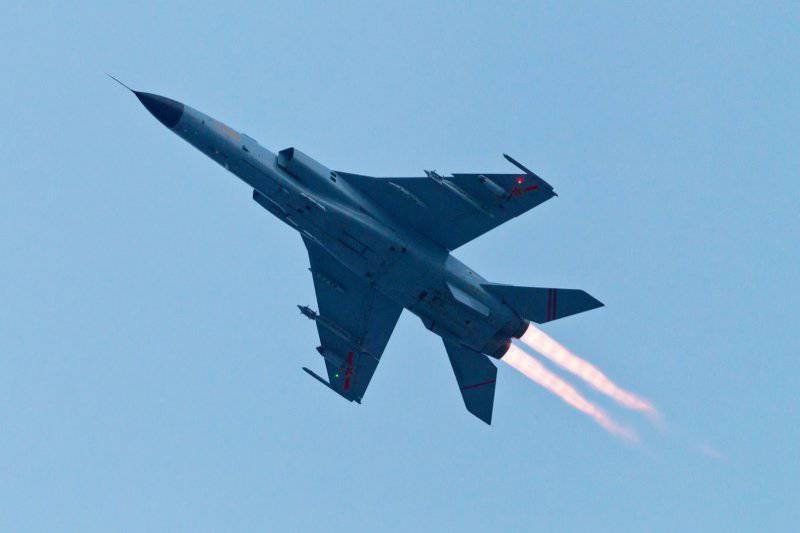 At the beginning of 2000-x in China, the construction of a full-fledged naval component of the SNF began. The first Chinese nuclear submarine with ballistic missiles (SSBN) "Xia" pr.092, created on the basis of submarines of the "Han" type, was laid back in 1978 at the shipyard in Huludao. The launch of the submarine on 30 took place on April 1981 of the year, but due to technical difficulties and several accidents, it was possible to put it into operation only in 1987. 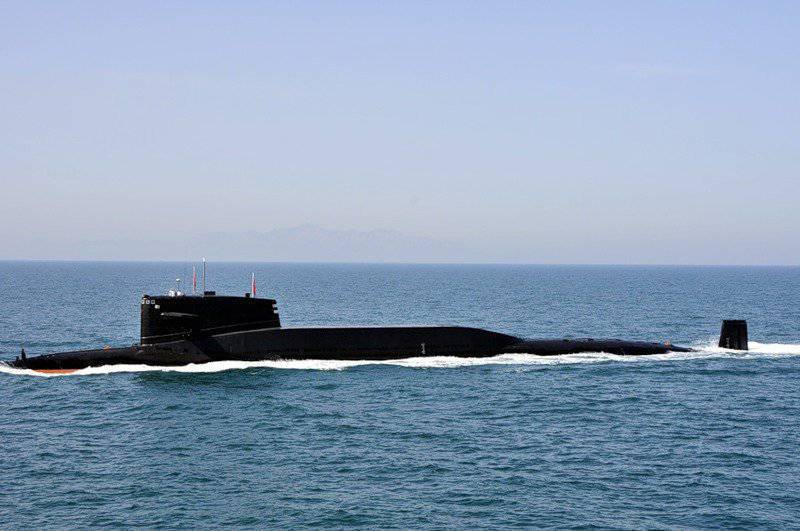 The SSNS of the 092 “Xia” project was armed with 12 mines for storing and launching two-stage solid propellant ballistic missiles JL-1, with a launch range of more than 1700 km. The missiles are equipped with monoblock warheads with power: 200 — 300 Ct.

Chinese nuclear submarine "Xia" was not too successful, and was built in a single copy. She did not conduct a single combat service as a SSBN and did not leave the internal Chinese waters during the entire period of operation. Thus, the "SS" SSBN can be regarded as a weapon that is in trial operation and cannot fully participate in nuclear deterrence due to its weak tactical and technical characteristics. Nevertheless, it played an important role in the development of the Chinese naval nuclear forces, being a “school” for training and a “floating stand” for developing technologies.

The next step was the Jin class 094 SSBNs, developed in China to replace the outdated and unreliable Xia strategic 092 class submarine. Outwardly, it resembles the Soviet missile-carriers of the project 667BDRM "Dolphin". Submarines of the 094 type carry over 12 ballistic missiles (SLBMs) ​​of the JL-2 type (Julian-2, Big Wave-2) with a range of 8 thousand km. 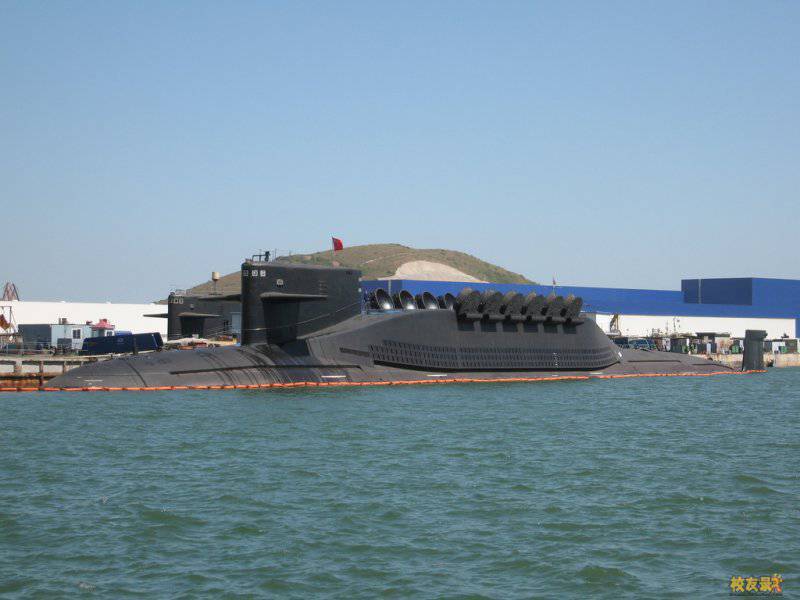 When creating a Chinese two-stage solid propellant ballistic missile JL-2, technical solutions and separate units of the Dunfen-31 ICBM were used. There are no exact data on warheads of the JL-2 rocket. 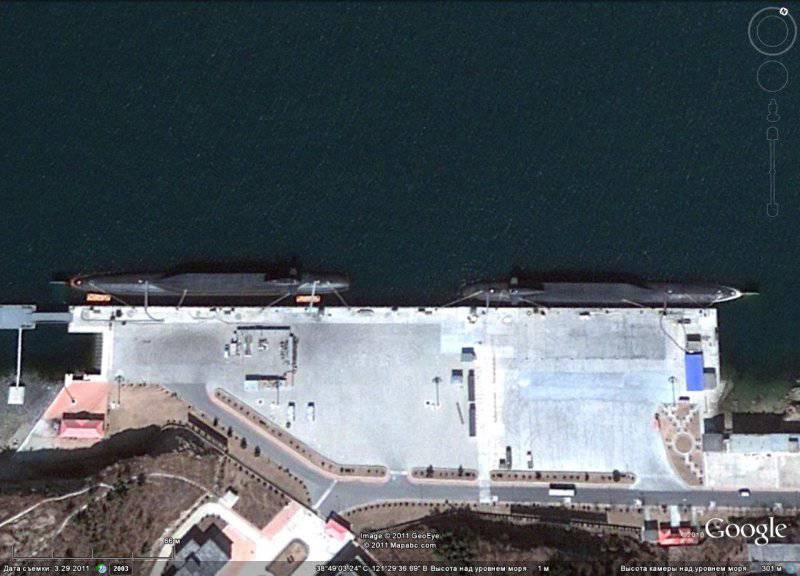 Satellite image of Google Earth: Chinese submarines of type 094 "Jin" in the basing station in the Qingdao region

The first submarine was formally commissioned in the 2004 year. According to satellite imagery, it is assumed that there are at least three more Jin-class SSBNs. According to the Chinese media, in March 2010, the 6-I was launched, in a row, a submarine of this type. According to some reports, the commissioning of all SSNS 094 "Jin" is delayed due to unavailability of the armament complex. 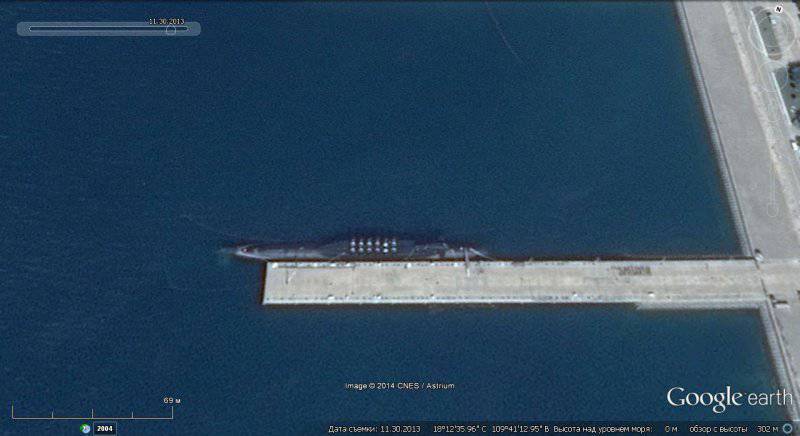 Satellite image of Google Earth: Chinese submarines of the type 094 "Jin" in the base station on the island of Hainan, the lid of the missile silos are open

China began to deploy new strategic nuclear submarines of the Jin type on patrol in 2014. Patrolling was carried out in the vicinity of the territorial waters of the PRC under the cover of surface forces. fleet and marine aviation, and apparently had a training character. Given that the JL-2 SLBM range is not enough to hit targets deep in the United States, it can be assumed that real combat patrols far from their hometowns will meet with serious opposition from the US Navy anti-submarine forces.

Currently, construction of the SSBN of 096 Avenue "Tang" is underway in the PRC. It must be armed with an 24 SLBM with a range of at least 11000 km, which will allow you to confidently hit targets in the depth of the enemy’s territory while being protected by your fleet.

Given China's economic growth, it can be assumed that by the 2020, the country's Navy will have at least 6 SSBNs, 094 AX and 096, with an 80 SLBM of intercontinental range (250-300 AU). Which roughly corresponds to the current indicators of Russia.

At present, the PRC is actively improving strategic nuclear forces. According to the Chinese political leadership, this should in the future keep the US from trying to resolve disputes with the PRC with the help of armed force.

However, the improvement and expansion of quantitative indicators of the strategic nuclear forces in the PRC is largely hampered by the insufficient amount of nuclear materials necessary for the production of warheads. In this regard, the PRC officially launched a project for the technical conversion of 400 tons of nuclear fuel elements, which should lead to an increase in uranium production by half.

There is a technique that allows an approximate representation of the number of nuclear warheads in China. According to different sources, from the end of the sixties to the beginning of the nineties, Chinese enterprises produced no more than 40-45 tons of highly enriched uranium and 8-10 tons of weapon-grade plutonium. Thus, for all history The Chinese nuclear program could produce no more than 1800-2000 nuclear charges. Despite the development of technology, modern nuclear warheads have limited shelf life. The United States and Russia were able to bring this parameter to 20-25 years, but so far they have not achieved such success in the PRC. Thus, the number of deployed nuclear warheads on strategic carriers of no more than 250-300 units and the total number of tactical ammunition no more than 400-500 looks most likely in the light of the available information. 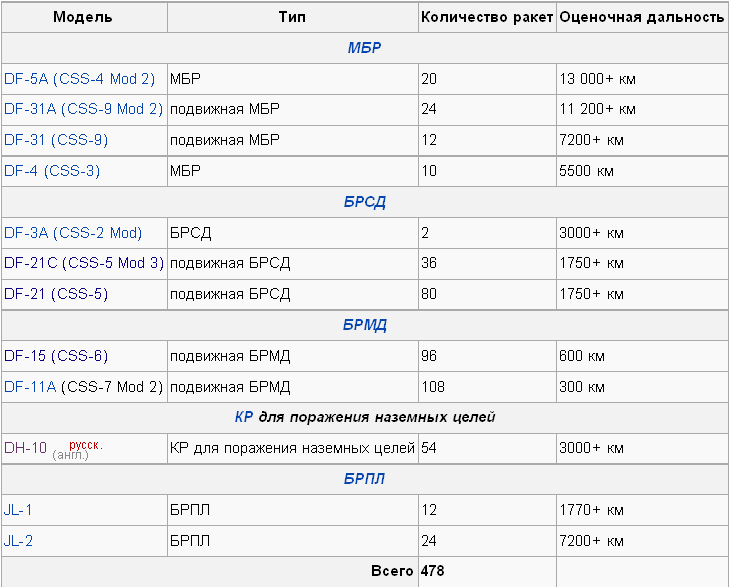 The potential seems to be modest in comparison with the strategic nuclear forces of the United States and Russia. But it is quite enough to cause unacceptable damage in the retaliatory strike of the People’s Liberation Army of China and to conduct large-scale military operations with the use of tactical nuclear weapons against the armed forces of any nuclear power. 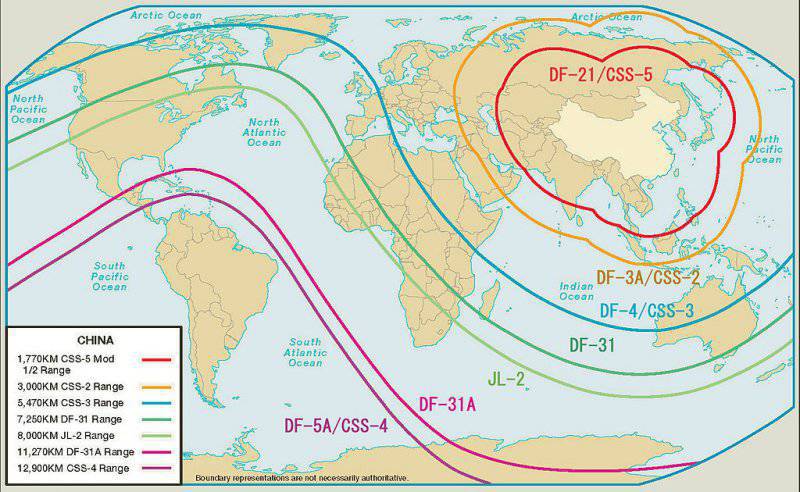 The radius of action of the PRC BR

Attention is drawn to the presence in the PRC in service of the “Second Artillery Corps” of a significant number of mobile DF-21 DSDS (more than 100). These complexes are practically useless in confrontation with the United States. However, they cover a significant part of the territory of our country.

The nuclear missile systems in the 60-70-s, which are in service with the PRC, due to their low combat readiness, survivability and security cannot yet provide a retaliatory or counter-sufficiently powerful retaliatory strike.

As part of the modernization of its strategic forces, China is moving from obsolete liquid rockets to new solid-fuel ones. New systems are more mobile and therefore less vulnerable to enemy attacks.

But the production of new mobile complexes is very slow. The weak point of technical reliability remains a weak point of Chinese ballistic missiles, which partly devalues ​​the achievements in this field.

By all indications, Chinese mobile complexes are more vulnerable than Russian ones. Mobile launchers of China's largest Russian, have the worst maneuverability and require more time for pre-launch procedures before launch. The central regions of the People's Republic of China, in contrast to Russia, do not have large forests where rocket complexes could take shelter during the daytime. Their maintenance requires considerable human resources and a small amount of auxiliary equipment. This makes the rapid movement of mobile complexes difficult and relatively easy to detect by means of space reconnaissance.

Nevertheless, huge funds and resources continue to be spent in the PRC not only on the direct creation and improvement of new types of ballistic missiles, but also on the further development of directly new type nuclear warheads. If in 70-80-ies, the few Chinese ICBMs possessing a QUO of 3 km were equipped with megaton monoblock thermonuclear charges, which made them typical “killers of cities”, then modern Chinese ICBMs carry separable cannons of individual guidance with a power up to 300 Kt with an CVT of several hundred meters .

It should be noted that with the US presence in Central Asia, part of China’s nuclear arsenals turned out to be in the zone of influence of US tactical aviation. In this regard, a significant part of the Chinese strategic nuclear forces, on an ongoing basis, is located in underground shelters carved into the rock in mountainous regions of the PRC. Such an arrangement provides in peacetime protection from satellite reconnaissance assets, and in wartime to a large extent guarantees invulnerability in the event of a sudden attack. China has built underground tunnels and structures of considerable size and length.

It is assumed that Chinese mobile missile systems will wait there for nuclear strikes on the PRC, after which they should move out of shelters for two weeks and deliver time-strikes on the enemy, thus guaranteeing the inevitability of nuclear retaliation. The delivery of a simultaneous nuclear missile strike by all the strategic nuclear forces of the PRC requires lengthy preliminary preparation. This discrepancy was the main reason for the change in views on the procedure for China’s use of nuclear weapons.

According to official military doctrine, the PRC is committed not to be the first to use nuclear weapons. But in recent years, the military leadership of the PRC has already begun to admit the possibility of using nuclear weapons first. This can be carried out in such extreme conditions as an unsuccessful frontier battle and the created threat of complete defeat of the main PLA groups, the loss of a significant part of the territory with the most important administrative-political centers and economic regions of strategic importance for the outcome of the war, the real threat of destruction by strategic nuclear forces by conventional means. defeat (which is extremely unlikely, given the state and number of PLA).

Further scientific, technical, and economic growth of the PRC, while maintaining the current pace of development, will provide its strategic nuclear forces in the coming decades the possibility of launching reciprocal and counter nuclear strikes. So the new quality of the Chinese military machine is not far off.