Information War of the West against Iran 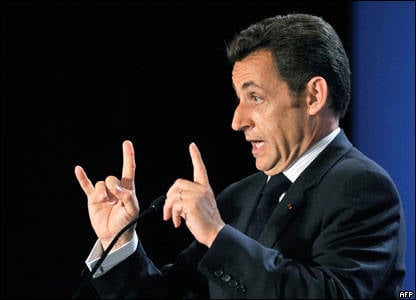 What do the words of the President of the French Republic mean about Iran? Judging by his speech, he simply entered the image of Napoleon. They have not yet finished off Gaddafi, but they are already threatening Tehran.


31 August at a conference of French ambassadors Sarkozy made a fiery speech, in which he virtually threatened the Islamic Republic of Iran (IRI) with war. According to the French president, Tehran refuses to talk seriously, conducts provocations, its military, nuclear, missile potential, carries a growing threat to the entire world community, which "could lead to a preemptive strike on Iranian targets." Nicolas Sarkozy did not specify who would deliver the “preemptive strike”, speaking on behalf of “progressive humanity”. According to the French president: “The international community can give a worthy response if it demonstrates unity, firmness,” and introduces new sanctions against Iran.

It is clear that any impunity of the aggressor creates his appetite. The issue with Libya has already been largely resolved. Next in line are Syria and Iran. But in the case of Iran, things are not so simple. Recall that the US and EU countries are demanding that Tehran curtail its peaceful nuclear development program, while at the same time accusing the Iranian authorities of secretly developing atomic energy. weapons. Iran rejects all these allegations, arguing that the state’s atomic program is aimed solely at addressing the growing energy and industrial needs of the population and industry. In June 2010, for precisely this reason, the UN Security Council approved the fourth resolution, which provided for the imposition of additional sanctions against Iran. However, Tehran’s position has remained unchanged: Iranian science will continue its movement towards progress, in spite of any threats from the United States, the countries of the West and Israel. In addition, Iran has accelerated work to strengthen its military capabilities.

It should be noted that when the “Arab Spring” began, the situation around Iran continued to heat up. Attempts were made to arrange a “color revolution” in Iran, to play the Kurdish and Azerbaijani “cards”. Of course, the Western media have not bypassed the topic of the Iranian nuclear program. Notable excitement in the EU countries caused a message from the head of the Atomic Energy Organization of Iran (AEOI), Fereidun Abbasi-Davani, about transferring part of the centrifuges for uranium enrichment from the Natanz enterprise to the Forda enrichment plant located in the Qom area.

Initially, the Iranian authorities made no secret of this. Thus, the official representative of the Ministry of Foreign Affairs of the Islamic Republic of Iran, Ramin Mehmanparast, was the first to announce the beginning of the installation of new cascades of improved centrifuges, which make it possible to enrich uranium more qualitatively (up to 20%). According to the Iranian news agency ISNA, the company planned to install a new generation 164 centrifuges. These actions were taken in accordance with Tehran’s plan for the construction of 2009 new uranium enrichment plants announced in November of 10. The report of the Iranian Foreign Ministry and the Atomic Energy Organization has caused a wave of anti-Iranian statements in the West. The French Foreign Ministry was at the forefront, assessing this event as "another provocation of Iran that violates UN resolutions."

With annoyance, another message was received in the West concerning the progress of the Iranian nuclear program - Tehran announced the completion of the test programs of the turbine of the Bushehr nuclear power plant before its expected launch. Then, the Western media spread reports that Tehran had finally rejected the “uranium deal” with the world community, which envisaged the refusal of Iran to produce nuclear fuel in the territory of the Islamic Republic in exchange for its import from abroad. The media quoted the reports of the head of the AEOI, Fereidouan Abbasi, that Iran had made great progress in the field of the peaceful atom, so the world powers now have to discuss another issue - about supplying other countries with the necessary fuel. In addition, he said that Tehran will not stop at the level of 20% enrichment of uranium. The AEOI leader again assured the world community of the peaceful nature of Tehran’s nuclear program, rejected the accusations of the International Atomic Energy Agency (IAEA), expressed his willingness to consider the claims of this organization only if it presents documentary facts and “changes the language of its reports”, because the current language is unacceptable for Tehran.

Interestingly, these informational battles were not limited to statements by scientists, diplomats and politicians. There was also a spy scandal, Iran was noted by a lawsuit related to the Iranian secret services ’disclosure of the Israeli terrorist network, which on the instructions of Jerusalem was engaged in the elimination of Iran’s leading nuclear physicists. So, Iranian citizen Majid Jamali Fashi confessed to the murder of nuclear scientist Masood Ali Mohammadi, which was committed at the beginning of 2010, on instructions from Israel. The trail of the USA and Israel is also visible in the attack against the Iranian computer network. Back in January, The New York Times newspaper reported that the Stuxnet virus was developed by American and Israeli intelligence agencies and that this is the most successful example of a computer attack to destroy the existing physical infrastructure of another state. Experts do not know how much the computer virus slowed down the development of the atomic program of the Iranian state. Sources in the US intelligence agencies believe that they managed to suspend the Iranian programs on 1-2 of the year.

In addition, the United States expressed its indignation at the fact that the Iranian Islamic Republic was convicted of two Americans who were convicted of spying on Iranian territory. At the same time, the White House once again accused Iran of being one of the main sponsors of international terrorists.

Iran responded by demanding that Washington immediately withdraw its troops from the territory of neighboring Afghanistan, since after reporting the death of bin Laden, the United States has no reason to maintain its military presence there. In addition, Tehran demanded that Western countries, and in particular the States, stop interfering in the affairs of the Arab states. During the unrest in England, Tehran condemned the actions of the British government and police to quell the unrest. Iranian students went to a rally of solidarity "with the oppressed people of Great Britain" and expressed their extreme outrage at the defeat by the British police of "peaceful legitimate protest."

EU countries to Iran’s actions responded by imposing sanctions against the Iranian Islamic Revolutionary Guards Corps (IRGC), which allegedly takes part in suppressing the Syrian opposition, although so far no one in the European Union has provided clear evidence. That is, the sanctions imposed, and the facts speaking about the intervention of Iran in the internal affairs of Syria were not provided.

Why does Paris set the tone for the EU?

It is necessary to pay attention to the fact that it is the French Republic that is currently at the forefront of those who support the so-called "Arab Spring" in the states of North Africa and Syria. To do this, it is enough to recall the aggressive statements of the French president made in the spring, about the fact that the fate of the Libyan leader threatens those “Arab dictators” who refuse to recognize the legitimate demands of the people on the path to “democracy”. Therefore, the anti-Iranian statement of Sarkozy can be considered in line with the fact that "democratization" and "modernization" are all countries of the Middle East and Iran among them. Sarkozy is simply a “mouthpiece” that voices long-accepted decisions.

At the same time, Sarkozy is trying with all his might to raise his heavily fallen rating after the social programs have been visibly curtailed in France, and the living standards of French citizens are falling. Soon new elections. The method of the old, tested, French public opinion must be distracted - one “little victorious war” was conducted, now they are preparing another. True, if you look closely, it is clear that the victory is not very convincing: Gaddafi has not yet been caught, not killed (his supporters are controlled, according to various estimates, from one third to half of Libya’s territory), they spent a lot of time, resources and forces on the war. We have not won yet, but are already nibbling over the “Libyan pie”.

Rome, which at the end of July actually ended its active participation in the Libyan war, after taking Tripoli, showed an unexpected agility. Silvio Berlusconi announced the desire of the Eni concern to receive oil and gas preferences in Libya. And France wants to keep intact its share - 35% of the oil sector of Libya, which the Libyan Transitional National Council promised. The corporations of the USA, England, Germany have their own interests. In such circumstances, Paris is unlikely to be able to maintain its share in the "Libyan pie", will have to share with its allies.

It is clear that despite the bellicose rhetoric of French, a military strike on the Islamic Republic of Iran is hardly possible in the near future. Iranian armed forces have quite a lot of power, and to suppress the air defense system and ensure the defeat of most strategic objects, it is necessary to create a powerful group of naval and air forces. Therefore, it is necessary to complete the "democratization" of Libya, then solve the issue with Syria. And only after that will the Iranian issue be resolved. Iran will try to blow up from the inside - using the community of Kurds and Azerbaijanis, the discontent of the youth.

Currently, there is an information war, the preparation of the "field" for the decisive battle. They shape world public opinion - about the “nuclear threat” from Iran, its policy of “anti-Semitism”, discrimination against Kurds, Azerbaijanis, the Iranian threat to Bahrain, Saudi Arabia, support for the “bloody regime” of Al-Assad, etc. : The West is at war with the Islamic world, "modernizing", transforming it for itself. The consequences of such actions will be catastrophic, huge regions will blaze.

We are in Yandex Zen
Separatism in Iran. Will the country's unity destroy internal conflicts?
Judgment in Tripoli. Saif al-Islam Gaddafi sentenced to death
12 comments
Information
Dear reader, to leave comments on the publication, you must to register.