December 27 2014
27
In 1995, the Day of Rescuer appeared on the calendar of professional holidays in Russia on the basis of a presidential decree. This day is dedicated to all those people who perform their professional and civic duty, eliminating the consequences of man-made and natural disasters, saving people during fires, floods, earthquakes, and other disasters. Over the years, Russian rescuers have been awarded not only numerous official awards for courage, heroism, and timely assistance in case of accidents, but also, more importantly, awards from millions of people who are grateful for the quality of work done by rescuers. These awards - words of gratitude and recognition for the work and the desire to come to the rescue. 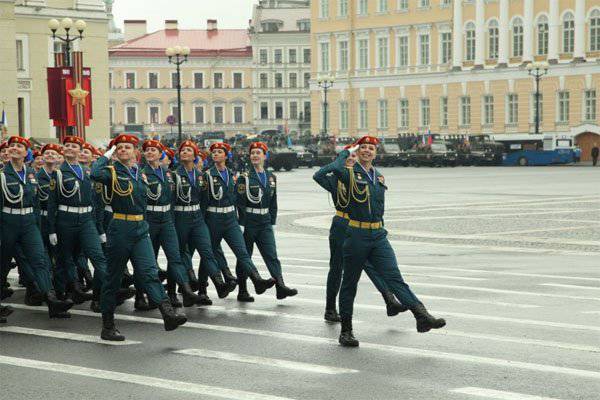 Today, December 27 Russian rescuers celebrate their holiday, while not for a moment without turning off from the readiness mode to advance to the aid of those who need it.

On the eve of the Day of Rescuer, Minister of the Russian Federation for Civil Defense, Emergencies and Disaster Relief Vladimir Puchkov congratulated the rescuers of Russia. A number of EMERCOM employees were assigned regular and special ranks on the basis of presidential decree No. 764 of December 13 2014 of the year “On awarding military ranks of senior officers, special ranks of the highest commanding staff and higher special ranks”. Awards were received by those employees of the department who showed themselves most actively and professionally.

MES in its current form leads its history since the formation of the Russian Federation. The date of the celebration of the Day of the rescuer was not chosen by chance. After all, it was 27 on December twenty-four years ago (in 1990) that the department was formed, which would later acquire the recognizable abbreviation of EMERCOM - the ministry of emergency situations - as it is shortly called in Russia. The Ministry, whose first and multi-year head was Sergei Shoigu, was created on the basis of the Russian Rescue Corps that existed at that time for several months, later renamed first the Emergency Committee (State Committee for Emergency Situations), and then (in 1994) today EMERCOM of Russia.

Unfortunately, there is no way to present statistics on how many lives were saved thanks to the coordinated and efficient work of Russian rescuers over the years. There is no exact statistics on the number of humanitarian events, among which, for example, the delivery of humanitarian aid to Novorossia. However, despite the fact that such statistics are not available, it can be said with confidence that Russian rescuers conducted tens of thousands of successful operations not only in Russia, but also abroad. The result of these operations were the saved people, their property, the presented hope for the restoration of normal life. 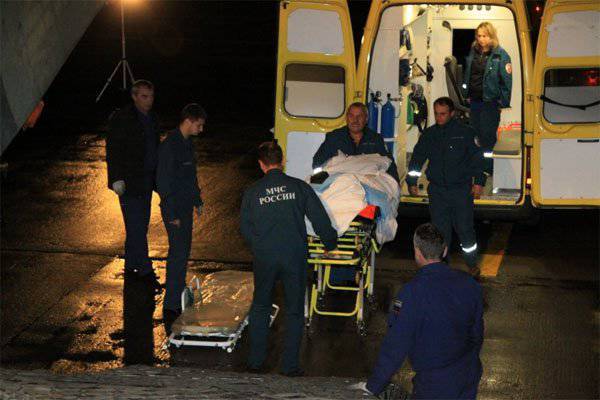 An earthquake in Neftegorsk, a flood in the Amur region, fires in the peat bogs near Moscow, hundreds of man-made disasters, disasters aviation, other transport, the consequences of monstrous terrorist acts - and in all cases, Russian rescuers showed exceptional professionalism, doing their job in such a way that I sincerely want to thank them for it.


On a holiday, I don’t want to talk about anything other than the holiday itself, but when preparing this material, an article about the Emergencies Ministry of Russia and the activities of rescuers in the “open (as she calls herself) encyclopedia” - Wikipedia drew attention. It seems that everything is as usual - something from the story, something from today's days, but somehow an entire paragraph immediately struck the eye, which tells about a number of episodes of services. Forgive the team of “Military Review” rescuers, but it is simply impossible to pass by such a “coverage” of events.

We represent the very “Wikipedia” paragraph, which for more than a year and a half (and partially over two years) “tells” readers about the work of the Emergencies Ministry, to put it mildly, in a very peculiar form and far from encyclopedic presentation:
Emergency rescuers come to the place of the fourth or fifth. The first to arrive are the police, fire and ambulance, municipal or regional rescue services. The time of readiness of rescuers of the Ministry of Emergency Situations is four hours and more. For example, during the accident at the Sayano-Shushenskaya HPP (occurred at 8: 13 local time), the first to arrive at the station were the fire station no. 8 of the Emergencies Ministry, located in the village of Cheryomushki. Two hours later, a group of firefighters arrived from Sayanogorsk, “at lunchtime” arrived the rescue vehicles of the South-Siberian rescue squad in the Republic of Khakassia. 29 March 2010, the Ministry of Emergency Situations helicopter flew to the subway 30 minutes after the explosion in the Moscow metro, and later ambulances. The 346 th Red Banner Rescue Center EMERCOM of Russia (01630 military unit Kolpino (St. Petersburg) for emergency response to possible emergencies highlights a consolidated mobile squadron with readiness 1,5 hours. 03 June 2012 at 23.40 MSK in Maritime Rescue Coordination Center St. Petersburg from the captain of the vessel, which was in the area of ​​responsibility of Russia, received a request for urgent medical evacuation of the patient 85 for years, who had internal bleeding. A negative response was received to the request for helicopter involvement from the North-West Regional Emergency Center and the North-Western Aviation Search and Rescue Center. A Finnish Coast Guard helicopter was involved.

After reading such information, it is not at all easy bewilderment: what was it? .. An employee dismissed for some sins or his deceived wife writes? In this case, the facts of these feats, of which thousands, and which were made by rescuers of the Ministry of Emergency Situations, do not consider “informative” Wikipedia necessary. But there is no point in presenting claims to Wikipedia, since it is completely understandable by what “wikipediosity” this project was sharpened.

Better back to the holiday.

The Day of Rescuer is a holiday of those who devote themselves to the performance of a service aimed at the readiness to render assistance to a person who has been one-on-one with trouble.

In just one 2014 year, EMERCOM employees took part in extinguishing more than 120 thousands of fires. The largest number of fires in this case was recorded in such regions of Russia as Moscow, Moscow, Chelyabinsk, Sverdlovsk regions, Primorsky Krai. 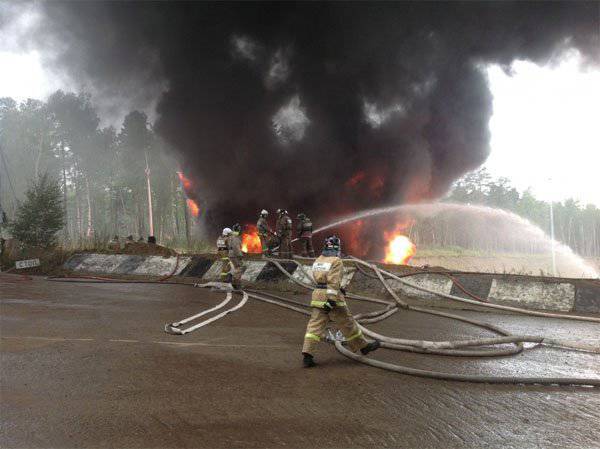 Thousands of people were saved on the water, including through the use of modern technology, as well as timely response to signals from citizens and municipal authorities. 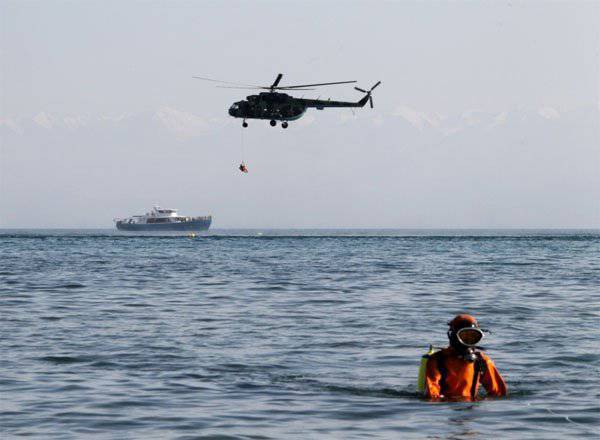 EMERCOM employees for the first three quarters of the current (2014) year participated in the elimination of more man-made 280 emergencies - from helping people injured in road and rail accidents to eliminating the consequences of domestic gas explosions in residential buildings and industrial enterprises.

The Russian Emergencies Ministry is honored with the most complimentary words from foreign colleagues, who appreciate the professionalism of their colleagues from Russia and the advanced methods they use to rescue people and eliminate the consequences of accidents.

On such a day, it is impossible not to say not only about the work of the rescuers that is so important for the country and the population, but also about the record of the ministry itself. The Ministry of Emergency Situations is the only ministry of the Russian Federation, headed by for more than two decades (considering the Emergency Committee) there was one person - Sergei Shoigu, who today, as we know, is headed by the Ministry of Defense. The presidents came and went, the chairmen of the government changed, and the Emergencies Ministry with its head demonstrated consistently coordinated work.

It is this stability, coherence, social and state benefit that attracts many young people to serve as rescuers who, we hope, will take into account the experience of older generations and continue their activities, which are part of the tasks of the rescue ministry, as it is often called in Russia.

For reference: while many citizens of the country will celebrate the arrival of the New Year, 400 thousands of EMERCOM employees will be on duty throughout the country.

Congratulations to all the rescuers of the Russian Federation on the holiday!
Ctrl Enter
Noticed oshЫbku Highlight text and press. Ctrl + Enter
We are
Day of the rescuer of Russia and the anniversary of the Ministry of Emergency SituationsCivil Defense Day. Emergency forces are always ready to help
Military Reviewin Yandex News
Military Reviewin Google News
27 comments
Information
Dear reader, to leave comments on the publication, you must sign in.