5 September 2011
6
After an ingloriously ended cooperation with the British company BP, Russia rather quickly found a new foreign partner for conducting a joint oil business. As just such a partner for the company Rosneft, which is referred to worldwide as the Kremlin’s oil storeroom, they looked after the American company ExxonMobil. American representatives did not postpone the decision to conclude a deal with Rosneft in the closet. Therefore, if everything goes according to the plan, then soon the geological exploration of the Kara Sea shelf will begin. ExxonMobil already allocates more than two billion dollars for this. 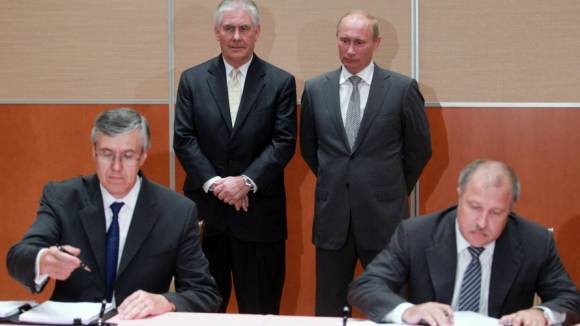 Why is the American company so eagerly taken up the cooperation with the Russian oil giant? The scattered dreams of working in Russia for TNK-BP were due to the fact that, as Western partners say, to run the oil business in Russia is the same as trying to share a sugar bone with a rabid dog. Such a comparison can be called too emotional, but it, in principle, reflects all the main nuances of the attitude to this kind of partnership. Many foreign companies that have ever wished to participate in a certain project, jointly with Russia, had inevitable difficulties. This is the real bureaucratic treatment of foreigners, this is a conversation from a position of strength, these are frequent unilateral decisions that in the West were interpreted as unwillingness to conduct further work. Apparently, foreign companies do not know that Russian business is also experiencing about the same pressure from a huge number of supervisory bodies that are producing year after year.

But ExxonMobil, despite all the described difficulties that may arise in its work on the territory of Russia, is ready to overcome them. The optimism of Americans can truly be envied. Rex Tillerson, who is the president of ExxonMobil, said that his company is simply not going to repeat the mistakes of other Western companies in Russia. First, Tillerson is ready to make compromises if it is needed, and second, ExxonMobil decided to insure its business. It turns out that the Americans, receiving a third of the shares of the joint venture, in the event of overt violations of the agreement with the Russian side, are entitled to demand from their Russian counterparts reimbursement of all expenses incurred through global legal institutions. Whether the Russian participants of the project are ready to cooperate in such a framework - time will tell.

At this stage of cooperation, it is planned that ExxonMobil together with Rosneft will search for deposits not only on the Arctic shelf of the Kara Sea, but also on the territory of the Black Sea near the city of Tuapse. At the same time, the Russian side will have the opportunity to participate in joint development at one of the American fields. Perhaps it will be gas production in Texas, or pumping oil in the Gulf of Mexico.

Representatives of ExxonMobil state that if the exploration of oil and gas reserves in Russia confirms expectations in terms of deposits, then a few more tens of billions of dollars will be invested in the project. Vladimir Putin after the agreements signed between the two companies, said that, in his opinion, the amount of investment in our country could be up to half a trillion dollars! This, he said, is not only money directly for the search and production of oil, it is also the development of an infrastructure component with the possibility of opening thousands of new jobs.

Some after a little impressive end of partnership with BP ask themselves: why in general the Russian side is looking for partners abroad, if it can’t give up the not quite modern methods of conducting joint business? The whole point is that Rosneft wants, like many Western competitors, to position itself as a global player in the oil and gas market. For this, Rosneft needs an urgent exchange of shares. The main thing is that all the joint activities on the part of Rosneft were not limited only to getting at least some piece in the West. At the same time, I would like to believe that already ExxonMobil, in turn, will provide for joint development in the United States not “withering” wells, but truly significant objects.

It remains to wait for the exchange of assets between the two large companies.

We are in Yandex Zen
Our modern defense has come a long way (20 photos with a few comments)
The End of Petrodollar, or What Happens in 2015
6 comments
Information
Dear reader, to leave comments on the publication, you must to register.